In the fourth century, the Faith was saved primarily by the laity — a lesson for the 21st century

The Political and Theological Connection: the Army (9)

After the Edict of Milan in 313 AD, the leftover pagan upper class, many of whom filled the ranks of the military, still dominated over society. Many of the leftover governing class clung to their pagan traditions from the older world, traditions not religious but intellectual, social, moral, and literary. A great number of old noble families were reluctant to accept the social revolution implied by the triumph of the Christian Church. They naturally sided with a movement, Arianism, which they instinctively felt to be spiritually opposed to the life and survival of that Church and which carried with it an atmosphere of “social superiority” over the populace. Many intellectuals felt the same. They may not have had pride of social wealth and position, but they had pride of culture and remembered with regret the former prestige of the pagan philosophers. They all felt this great revolution from paganism to Catholicism would destroy the old cultural traditions and their own cultural positions.

Arianism had yet another ally, a very subtle ally: the tendency of government in an absolute monarchy to be half afraid of the emotions present in the minds of the people, and especially the poorer people (laymen) — emotions which, if they spread and became enthusiastic and captured the masses, might become too strong to be ruled and would have to be surrendered to.

The other ally Arianism had was the Army. It is necessary to discuss the military-political power of the Army because much of the Arian heresy revolved around it. 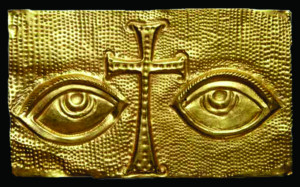 Golden plate with the effigy of Constantine

The Army was the binding force, support and material guarantee of the Roman Empire. The Roman Empire was a military state, not a civilian state. The Army’s commander-in-chief (the Emperor) was the absolute monarch of the whole state. The Army went solidly Arian, feeling Arianism to be the potentially destructive power which made it superior to the civilian masses. The soldiers were sympathetic with Arianism for the same reason the old upper class pagans and intellectuals were.

There arose a feud between the Army chiefs on one hand, and the Catholic bishops on the other. Certainly there was a division between Catholics in the towns and the Catholic peasantry in the country, and the almost universally Arian military. 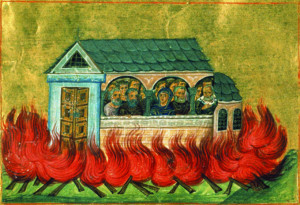 the Holy Martyrs of the North African Persecution by the Arians in 484 A.D.

Bishops and clerics at this time found it beneficial to their careers to go along with the “powers that be.” It appears a similar political and theological connection is occurring today. Many governments are accepting the LGBT culture and supporting it in their laws. Divorce and cohabitation are also warmly accepted, as well as the rejecting of Judeo-Christian values as the basis of these countries’ legal structures. The theological left and political left are forming a bond and looking to force their heterodoxy on the Catholic faithful and the world.

The episcopate (bishops) whose action was so prompt and concordant at Nicaea in response to the rise of Arianism did not, as a class or group of men, play a favorable part in the troubles consequent upon the Council; the laity did. The Catholic people, in the length and breadth of Christendom, were the obstinate champions of Catholic truth, and the bishops were not! Of course, there were illustrious exceptions: first St. Athanasius; then St. Hillary, St. Eusebius the Latin (not Eusebius of Nicodemia), and St. Phobadius; after that, St. Basil the Great, the two Gregories and St. Ambrose. A few other bishops, Eustathius, Paulus, Dionysius and the Egyptian bishops, whose number was small in proportion to the great powers controlling the Eastern Church, also played significant roles. On the other hand, there were exceptions to the Christian heroism of the lay people, especially in some of the great cities. I include the local parish priests, in many places, with the laity; but on the whole, we are obliged to say that the governing body of the Church came up short, while the governed (lay people) were pre-eminent in faith, zeal, courage and constancy.(10)

In the city of Alexandria, one of the most infamous of Arian bishops, George, made his appearance and took control. He arrived during the Great Feast with a large group of soldiers. He immediately attacked the people and attempted to force the orthodox Christians to take an oath of Arianism. After his scourging and torture of the people,some of them even died. He also later renewed the violent persecutions. He unleashed the military on many orthodox Christians who were worshipping in cemetery chapels instead of the churches that commemorated him. Many were killed and others banished.

Similar things occurred in other areas of Alexandria and the other cities under Emperor Constantius II in the East. At a church in Quininis, the bishop, backed by soldiers, attacked herdsmen and young people in an effort to get them to submit.(12) The orthodox bishops Paulinus and St. Hillary were banished. During this time the proorthodox Emperor Constans died and the pro-Arian Emperor Constantius became emperor of both East and West. He managed with extreme pressure from Arian bishops to manipulate Pope Liberius into signing the heretical “Arian Creed” denying Christ’s divinity.(13) Constantius later banished him. When Liberius returned after banishment, rescinding the Arian Creed, he was shunned by fellow clergy and the people because he was looked upon as weak. By the way, when St. John Henry Newman recorded this incident in a 19th-century essay, he was blacklisted by the Vatican as a possible heretic. As writer Michael Kearney notes, apparently Newman’s assertion that the Arian heresy was extinguished primarily by a few God-fearing bishops and pious lay people — not by the “infallible pronouncements” of the Roman Pope — did not fit the preferred model of 19th-century Roman Catholic ecclesiology.(14)

With the death of Constantius II, the Empire in the West fell to Valentine I, who protected the Orthodox, but his brother, pro-Arian Valens, ruled in the East and subjected Athanasius and the orthodox lay people to a severe persecution. At the Portan Basilica, in the city of Edessa, St. Ambrose was teaching the people the Creed but the Emperor’s wife intended to take control in support of the Arians. The people hearing this gathered at the church, blocked its entrances and seized the Arian bishop. The Roman commander dispatched soldiers and arrested many people, who were fined and thrown into prison(15). 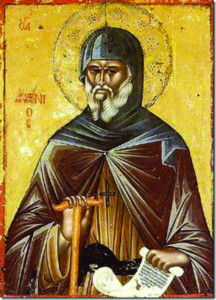 There was a great hermit named St. Anthony of Alexandria, a lay person and considered the founder of the Eastern monastic system, who was highly respected by the people and a good friend of St. Athanasius. The Arian bishops tried to use St. Anthony to their advantage, but he left the solitude of the desert and went about the city of Alexandria condemning the Arians and their heresy and telling the people that the doctrines of the apostles were preached only by St. Athanasius. (16,17) St. Athanasius and his fellow orthodox bishops were hunted down and exiled. St. Athanasius was constantly being moved for his safety, mostly under the protection of the faithful lay people.

Christendom as a whole followed St. Athanasius, but the persecutions continued. St. Basil says, “About the year 372, the lay people are sound in faith and avoid places of worship which they consider schools of impiety; the people have left their houses of prayer and assemble in the deserts, a pitiable sight: women and children and old men amid rain, storms and winds.”(18) When the pro-Arian Emperor Valens was killed in 379 AD, orthodox Emperor Theodosius took over in the East and orthodox Emperor Gratian in the West. The Arians were crushed and the Second Ecumenical Council of Constantinople approved our current Nicaean Creed.

St. John Henry Newman said: “The fourth century is an age of Doctors, illustrated by Saints Athanasius, Hillary, the two Gregories, Basil, Chrysostom, Ambrose, Jerome, Augustine, etc.; nevertheless, in that very day, the Divine Tradition committed to the infallible Church was proclaimed and maintained far more by the people than by the Episcopate.”(19) Again Newman says: “But I mean still that in that time of confusion the Divine Dogma of Our Lord’s divinity was proclaimed, enforced, maintained, and (humanly speaking) preserved in their duty to their baptismal vows far more by the Ecclesia Docta (the unlearned, simple lay people) than by the Ecclesia Docens (clergy, the learned, the teachers).” Again he says: “While on the other hand it was the Christian people, who, under Providence, were the ecclesiastical strength of Athanasius, Hillary, Eusebius of Vercellae, and the other great solitary confessors who would have simply failed without them.”

What do we promise through our godparents in baptism? We promise to denounce the devil and sin, and to live according to the teachings of Christ and His Church.(22) Our Lord said, “I am the way, the truth and the Life.”(23) Again, Our Lord said, “I came into this world to give witness to the truth; all who love the truth listen to me.”(24) Our fidelity at baptism is promised to Christ, and takes form later in our assent to the Deposit of the Faith and the perennial teachings of the Church.

Our Catholic lay brothers and sisters understood this in the fourth century and, driven by the Holy Spirit, rose up to carry out their baptismal vows, and thus they saved the Church.

What did Venerable Fulton Sheen say in 1972, echoing the words of St.John Henry Newman some 140 years earlier? He said, “Who is going to save the Church? Not our bishops, not our priests and religious! It is up to you, the lay people! You have the minds, the eyes, the ears to save the Church! Your mission is to see that your priests act like priests, bishops like bishops and your religious act like religious!”(24)

Father Bill Casey said in his talk, “Called to Battle”: “Maybe we can’t change this culture, but we can go down on record as at least trying.” Then he quotes St. Teresa of Calcutta: “God doesn’t ask us to be successful, just faithful!” St. Athanasius, the other saints and the faithful Catholic laity put everything on the line to protect the Deposit of the Faith!