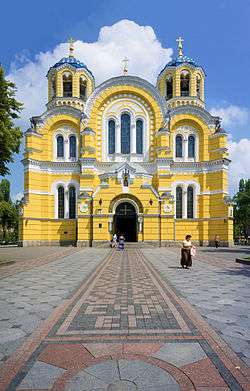 The beautiful St. Vladimir’s Cathedral in Kiev, Ukraine, now the seat of the Ukrainian Orthodox Church, a Church which was granted autocephaly on October 11, 2018, a bit more than three years ago, by Patriarch Bartholomew of Constantinople, the “first among equals” of the Orthodox Patriarchs, despite the objections of the Russian Orthodox in Moscow. This has led to an unfortunate split in world Orthodoxy, a split which, after three years, continues to have many ramifications, as discussed in the article below by an expert on Orthodoxy, Peter Anderson

Events in the Orthodox world continue to unfold in a complex way — one might almost say, in a “Byzantine” way(!) — suggesting the difficulty of the present challenges to the unity of the more than one dozen Orthodox Churches in the world.

These Churches (the Russians, the Greeks, the Serbs, etc.) have been unable to come to unanimous agreement on the October 11, 2018 decision (a little more than three years ago) of Greek Orthodox EcumenicalPatriarch Bartholomew to approve the autocephaly (autonomy) of the Ukrainian Orthodox Church, which had traditionally — since 1686 — been linked to the Russian Orthodox Church in Moscow (link).

The Russians are the ones who most strenuously opposed, and oppose, the declaration of the autocephaly of the Ukrainians.

They argue that there was spiritual unity between the Russian and Ukrainian members of the Church, despite the presence of national boundaries.

Many Ukrainians have supported the creation of a separate Ukrainian Orthodox Church no longer linked to Moscow, which reinforces Ukrainian national identity — something which the United States government has also supported as a matter of geopolitical policy in the region.

But, precisely because there is so much at stake in this matter that is not just religious, but political, there are some, even in Ukraine, who hesitate to give full support to this autocephaly of the Ukrainians, or at least in the way it was granted, because it took place without first achieving the consent of the Russians, something that ordinarily, according to Orthodox canon law, should have occurred first.

As a result, for three years now there have been condemnations from Russia of the action of Bartholomew in moving forward despite the opposition of the Russians, and the Russian Orthodox have even ceased to pray for Bartholomew, as Ecumenical Patriarch of Orthodoxy, in their weekly liturgy, something always done in the past.

In this sense, the Orthodox world is deeply and sadly divided as a result of what has happened in Ukraine.

It is not the place of a Catholic observer who wishes to support the ecclesial unity of the Orthodox, and eventual greater unity between the Orthodox and the Catholic Church, to judge what has happened.

It does seem important to take into account all the arguments made on both sides, in order to understand as fully as possible the reason for the disagreement, and, possibly, in this way to position oneself to be an impartial observer, with an unbiased voice, in what is clearly a very emotional, and important, ecclesial matter.

But certainly, in the perspective of a global process of secularization — meaning, the pointing of all humanity toward what is “de-sacralized” (secularized, worldly, material) rather than toward what is sacred (toward God, the holy, the divine — words which have no significance in a thoroughly secular worldview) — in the perspective of such a process, which seems clearly to be moving all of humanity swiftly toward a fully “post-Christian” world, the lack of unity among Christians, the inability of traditional Christian Churches to present a common, effective witness in favor of the Christian faith to the world, seems a tragic fact that must cause deep sadness.

A tragic fact which, seemingly, ought to be overcome through careful study, discussion, hearing of arguments from all sides, and then, if possible, recomposing unity.

In this context, it is important to follow the twists and turns of the latest developments in the Orthodox world, which are recounted with care, and great fairness, by the American Catholic writer Peter Anderson, who lives in Seattle, Washington — arguably the best and most balanced observer of these matters in the world today. (He is also a treasured contributor to Inside the Vatican magazine.)

And there does seem to be some possibly hopeful movement in this matter, as Anderson tells us below.

Here is Anderson’s latest report, which he emailed out earlier today. —RM

“Pray for the Church”

A very interesting article, entitled “Pray for the Church as it seeks new Archbishop — Orthodox told,” has appeared in the Uganda media. (link)

“Orthodox Christians have been asked to pray for the Church to conclude well the process of getting the new Archbishop of the Metropolis of Kampala and All Uganda. The prayer was made by the Dean of St. Nicholas Cathedral Namungoona, Fr. Dr. Nicholas Bayego, during the Holy Mass to celebrate the New Year which was the first time in so many years the Metropolis had no Shepherd. ‘Use this period to pray for the process the church is going through to get us a Bishop. On January 10, 2022 the Holy Synod of the Patriarchate of Africa will begin to convene up to January 13, 2022 to discuss several issues among them including electing the new Archbishop,’ said Fr. Bayego. The New Metropolitan will be in the footsteps of the late Archbishop Metropolitan Jonah Lwanga who died on September 5, 2021, in an Athens Hospital in Greece, leaving the Metropolis and the country in total shock.”

Although there has been no official announcement by the Patriarchate of Alexandria as to the dates of the next Holy Synod session, the dates of January 10-13 are most likely correct.

The dean of St. Nicholas Cathedral, the most important Orthodox church in Uganda, would appear to be a very reliable source of information.

A letter from Bishop Markos of Kisumu and Western Kenya (Patriarchate of Alexandria), dated January 3 and discussed in my last report, stated that the Synod would begin “in the next few days.”

However, the decision as to the successor of Metropolitan Jonah will also be extremely important.

Prior to the death of Metropolitan Jonah, there were three Black metropolitans and two Black bishops on the Holy Synod.

The three metropolitans were Jonah of Kampala and All Uganda, Ieronymos of Mwanza (Tanzania), and Innokentios of Burundi and Rwanda. The two bishops were Neophytos of Nieri and Mount Kenya and Silvester of Gulu and Eastern Uganda.

Of the five, Metropolitan Jonah was the most prominent and influential.

Metropolitan Jonah, who died at the age of 76, had been truly a remarkable person.

He had been a bishop of the Patriarchate of Alexandria for 29 years and Metropolitan of Uganda for 24 years.

He was one of three metropolitans who held the title “Elder” and sat next to the Patriarch at meetings of the Holy Synod. He had performed wonders in Uganda.

Metropolitan Jonah oversaw the establishment of 18 medical clinics and one hospital. He was fearless in defending human rights at the time of authoritarian governments in Uganda. He was the protégé of Archbishop Anastasios, primate of the Orthodox Church of Albania, when Anastasioswas an acting archbishop of East Africa.

The following article contains some wonderful eulogies about the Metropolitan [Jonah]. (link)

He [Jonah] lived a monastic life of self-denial. It is said that he had two pairs of shoes, a few clothes, and a few cassocks. If people donated some money to him, he would give it to the needy. He did not own any personal property, bank account, car or house. The following is a short video of his life. (link)

After the death of Metropolitan Jonah, Patriarch Theodoros said with emotion that the Metropolitan left a “great spiritual legacy” and made “a great contribution to our Patriarchate.” (link)

In my opinion, the death of Metropolitan Jonah has left the Patriarchate of Alexandria, at least for a period of time, in a weakened position with respect to its native African clergy.

With his presence, native African clergy could believe that one of their numbers had great importance in the governance of the Patriarchate.

From the perspective of the Patriarchate, Metropolitan Jonah was a person who could possibly use his influence and prestige to persuade native African clergy to remain faithful to the Patriarchate of Alexandria.

However, now he is gone. Can someone be found at the next Synod meeting to fill his shoes? This will be an important decision.

There is also the question of whether the Moscow Patriarchate is now seeking to take advantage of the weakness caused by the death of Metropolitan Jonah.

However, the Holy Synod of the Moscow Patriarchate took no action with respect to the priests in the Patriarchate of Alexandria until its session on September 23-24, 2021, which was less than three weeks after the September 5 death of Metropolitan Jonah and almost two years after the open letter. (link)

Was this close timing with respect to the death of Metropolitan Jonahsimply a coincidence? I do not have an answer to this question.

The oath is on one page and is in English. It makes interesting reading.

In the oath, the priest asserts that he is signing it “for the sole purpose of saving my soul from spiritual danger of associating with the schism in Ukraine, with which the Patriarch of Alexandria entered into communion.”

The signer also makes six different “pledges,” including being faithful to the Patriarch of Moscow and to a bishop appointed by him “to my dying day.”

The signer asserts that if he breaks his “oath of loyalty to the canonical Church and lapse into communion with a schism, may the Lord punish me.”

The oath is apparently designed to demand complete loyalty from the priest and to prevent the priest from subsequently changing his mind.

The popular Greek website Romfea.gr has prominently posted a commentary by Metropolitan Isaiah of Tamassos (Church of Cyprus). (link)

Metropolitan Isaiah has been very critical of the decision by Archbishop Chrysostomos, primate of the Church of Cyprus, to recognize the OCU. He has also been critical of the Ecumenical Patriarch having any primacy of authority as opposed to simply a primacy of honor. See, for example, link.

The Romfea.gr website on which the commentary is posted has been sympathetic to Moscow’s position in the Ukrainian religious dispute, and the head of the website is a friend of Metropolitan Hilarion.

In the commentary, Metropolitan Isaiah refers to the creation of an African exarchate by the Moscow Patriarchate and concludes: “In the face of this danger, it is urgent to convene the Synaxis of our Primates, presided, of course, by the First among our Orthodox equals, Ecumenical Patriarch Bartholomew, who is also responsible for convening such an Assembly, as he has done before 2018, where many problems were solved there, even with difficulty.”

Less than a week earlier, Metropolitan Hilarion had stated that “the conciliar wisdom of the Church can heal the schism in the world Orthodox community.” (link)

The commentary by Metropolitan Isaiah may possibly be a further step to marshal support for a meeting of the primates.

The Moscow Patriarchate has consistently argued for a second Amman-type meeting of the primates.

As stated in my last report, it is possible that a motive, in part, for the Moscow Patriarchate’s actions in Africa was to create a situation where the primates would agree to a second meeting.

At the first Amman meeting, Patriarch Kirill envisioned that a second meeting would address six topics — all of which relate to the powers claimed by the Ecumenical Patriarch. (link)