Letter #25: A Beautiful Day in Rome

Letter #25: A Beautiful Day in Rome

Walking along the Tiber this afternoon, near the Ponte Sant’Angelo, I noticed a sign by a church announcing a concert of chamber music — a piano and cello duo — to begin at 6:30 p.m. I glanced at my cellphone. It was 6:33.

There was no crowd there at all; in fact, not a soul. So I knocked on the massive wooden door, and, after a minute, somewhat to my surprise, it creaked open.

Inside, under a high ceiling, were several rows of pews, and, in the front, a splendid, black Alfonsi grand piano had been rolled out.

There, a thin, dynamic, 31-year-old Italian by the name of Michelangelo Carbonara, his hands moving with astonishing lightness and precision, was playing Beethoven’s Sonata No. 5. His wife, Kyungmi Lee, was accompanying him on the cello. I was the 15th person in the audience.

As Michelangelo played, I closed my eyes and drifted in my mind through the things I had just seen in the streets of Rome during the afternoon:

a) crowds from many countries — Americans, Germans, French, Japanese — filling the streets and squares of the city, walking peacefully under the Roman sun

b) a young Italian couple (actually, she was born in Paris, one of her friends told me) with dozens of family and friends, all the women wearing the finest dresses and shoes, all the men wearing the finest suits — along with a little boy and little girl dressed completely in white, one carrying a basket of flowers, the other carrying a white pillow with two gold rings on it — were married in a Mass at San Luigi dei Francesi 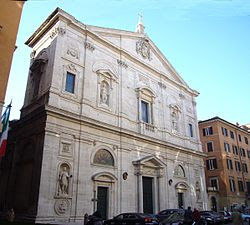 c) inside the church of San Luigi dei Francesi (above), which is just a few steps from Pazza Navona, six musicians were playing, and a bass in the balcony above the entrance way was practicing “Panis Angelicus,” his voice majestically filling the church with the words “bread of angels” 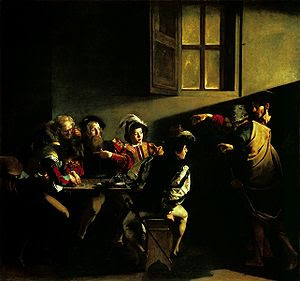 d) there, in the back of the church, is the marvelous painting of Caravaggio, The Calling of St. Matthew (above) where Christ, his hand outstretched like Adam’s hand in Michelangelo’s Creation on the ceiling of the Sistine Chapel (Christ is the second Adam — in him, the human race received a second chance) calls Levi to come follow him

And it suddenly came to me that the figure in that painting that I always thought was Levi (Matthew) — the old man — was not Levi at all.

I realized that Christ was calling to the young man at the end of the table, the one with his head bent down, looking at his money, and not to the old man who seems to be pointing his finger at himself as if to say, “Do you mean me?”

The old man, I concluded, is actually pointing, not to himself, but to the younger man next to him at the end of the table, as if to say, “Do you mean him?”

(I don’t know if I am wrong to conclude that Matthew is the young man at the end of the table, but the painting makes no sense to me now any other way.)

Then, in the little church, the piano-playing virtuoso and his cello-playing wife were done, and the 15 of us applauded them for about 45 seconds, and they walked out, waited a moment, then came back for an encore.

And the piece they played for the encore, Sergei Rachmaninoff’s “Sonata in G Minor for Cello and Piano Op 19 No. 3 Andante (1901)” was… splendid. Moving. Glorious. The music soared, bringing those of us who heard it along for the ride.

Which led me to think: how wonderful is Rome! How beautiful is a city where the food — still grown (for the most part) from traditional seeds in traditional ways — tastes right, and good; where people walk by the hundreds and thousands from place to place; where the citizens of many nations mingle in peace; where churches containing Caravaggio’s paintings can be entered freely, and used for weddings; where people still observe some of the tradition’s of our forefathers, wearing long white gowns and exchanging rings to promise themselves; and where young musicians, struggling to make careers, can play divinely for 15 people on a sunny July evening, and create music which can cause the soul to awaken, and soar, and live.

Here is a link to a version of the Rachmaninoff piece; I urge you to take a moment to listen to it: http://www.youtube.com/watch?v=U6YhqbgUEKQ

The day could not come to an end without a conversation with an old friend, who, naturally, offered some speculations on curial and ecclesial matters which are not yet fully decided. Thus, what he told me is not certain, and has no scientific value, except this — this is the type of thing some people in Rome are now saying. Nothing more.

As some of you may have realized by now, I am far more interested in Christo-centric questions, in the question of the Logos, the meaning, of our existence, than I am in ecclesial musical chairs. But some are interested in such matters.

It is said that a couple of rather effective, experienced nuncios may soon be rewarded with higher posts, one in the Curia, another in Venice, which was just left vacant by the decision to move Cardinal Angelo Scola to Milan. (And it should be noted that, just as Milan is a see from which past Popes have emerged, so also is Venice.)

At the same time, the excellent work of Archbishop Claudio Maria Celli, who organized the excellent new Vatican news website, may soon be rewarded by a promotion to a cardinalatial post.

Finally, as Nostradamus wrote in regard to the 4th of July:

“In the city of eagles, getting stronger,
smoke, fire, scandals; far in the west
as in Rome, time for a cappucino.”