“After this, our exile…”

A reflection on an evening prayer

By Robert Moynihan, reporting from America

Sometimes you can takes a wrong turn… and end up in the right place.

And this is one deep reason, perhaps, that we should not entrust our entire lives to Global Tracking Devices, and similar technologies, existing or under development, which aim to ensure that we always know where we are, and reach the exact place we set out to reach.

For it is in going off course, and even getting lost, that we sometimes encounter an unexpected destiny, which otherwise we might never have found at all.

When I was a boy, my father’s brother, whose name was the same as mine, would visit our home every so often. He wore the brown robe and white cord of the Franciscan friar, a follower of St. Francis of Assisi. He died almost 30 years ago, at the friary on 31st Street in New York City. And the memory of that robed friar, whose name I also bore, lodged in my mind and formed part of my identity. And so I always felt, as if by adoption, one of the sons of St. Francis, the “little poor man,” the “troubador of God.” 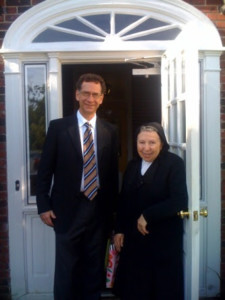 Yesterday, I visited the “fighting nun,” Sister Margherita Marchione (photo left), at her convent in Morristown, New Jersey. She described her life to me: entering her order, the Religious Teachers Filippini, at the age of 13, in 1935, and we discussed her commitment to revealing the historical truth about the life and work of Pope Pius XII. She has written 61 books. She is 87 and a half years old. And she has the spirit of a nun of 20.

And then I made my way to New York City, and I was surprised when I turned a corner in Yonkers, to find myself in… Assisi.

I had expected to stay with a family in Brooklyn. But an illness made that problematic, so, after a last-minute phone call, I found unexpected hospitality with the Franciscan Friars of the Renewal, also known as CFRs, a new order of Franciscans founded by several Capuchin friars in the late 1980s under the guidance of Cardinal John O’Connor of New York, which has since grown more than 1,000% and now numbers about 130 friars in about 16 houses in America, England, Ireland, Honduras, Nicaragua, and Sudan.

One of the founders was Father Benedict Groeschel, who several years ago was in a car accident near the Orlando, Florida, airport, which left him, according to all external signs, clinically dead for 15 minutes. The doctors took off their gloves and were leaving the operating room as the vital signs flatlined, when Father John Lynch called out to them, “Don’t leave! You need to keep trying! I know he will survive!” The doctors returned reluctantly to the bedside. After 12 more minutes, Father Groeschel’s heart began to beat again. This year he is celebrating the 50th year of his priestly ordination.

This evening, the friars at St. Leopold’s Friary in Yonkers, New York, prayed their usual evening prayer in their small, wood-paneled chapel. 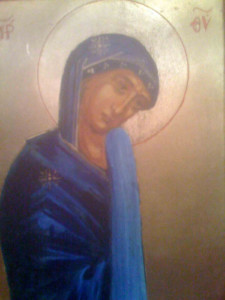 The prayer for Tuesday, September 15, the Feast of Our Lady of Sorrows (photo of icon in the Friary chapel, left), was prayed by 12 friars, but it was shared by hundreds and thousands of others across this city, and this country. and this world.

Sometimes we forget how powerful prayer can be.

In a time when, in America, the sole topic of conversation is the president’s health care plan, it is astonishing how little mention is made of prayer.

Yet, in the silence of chapels and churches, of convents and monasteries, of college Newman centers and FOCUS gatherings, in homes and hospitals, a common evening prayer rises.

This prayer is like a murmur, an appeal, a cry.

Its purpose is to “connect” this world, which presses upon us, and surrounds us, with another world, which is available to us only if we collect ourselves, and turn ourselves toward it — an eternal world.

A retreat to silence is a tactical decision in the battle for our souls.

And this is the spiritual wisdom of the Church.

Tonight’s prayer was called a “Prayer in Distress,” and it was drawn from Psalm 143 — a psalm of King David. I must emphasize this: the Christians who pray the Breviary pray most often the words of King David, imbibe the poetry of King David, are fascinated and enfolded by the passion for God of King David.

“Lord, listen to my prayer,” it began.

Half the friars prayed, while the others waited. “Turn your ear to my appeal. You are faithful, you are just; give answer.”

I was struck by how familiar David is with God — and how this familiarity is inherited by the friars, by all who pray this office.

“Do not call your servant to judgment,” they continued, “for no one is just in your sight.”

This is the characteristic sentiment of the prayer: humility.

One who prays this Breviary evening prayer cannot imagine he is perfectly “righteous.”

The other friars respond:

“The enemy pursues my soul.” Their voices are solemn, compelling. there is drama in their words. “He has crushed my life to the ground; he has made me dwell in darkness like the dead, long forgotten. Therefore my spirit fails; my heart is numb within me,” 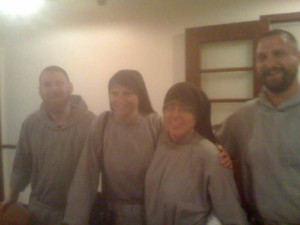 The words are David’s. The words are also those of Brother Tobias Joseph, age 30 (formerly Bryan Holtz, of Jacksonville, Florida, once a high school quarterback) and Father Jacob Marie, ordained on May 9, 2009, by New York’s Archbishop Timothy Dolan (formerly Kevin Hausman, of Cleveland, Ohio, and St. Petersburg, Florida).

(In the photo, Father Jacob Marie is on the left, Sister Frances Teresa of the Annunciation, from Las Vegas, next to him, then Sister Monica Maria Faustina of Mercy, from Holbrook, Long Island, then Brother Tobias Joseph on the right.)

And, by the strange destiny which has brought me here tonight, the words are also mine.

“Rescue me, Lord, from my enemies; I have fled to you for refuge. Teach me to do your will for you, O Lord, are my God… For your name’s sake, Lord, save my life; in your justice save my soul from distress.”

Then comes the reading, from the First Letter of St. Peter: “Stay sober and alert. your opponent the devil is prowling like a roaring lion looking for someone to devour. Resist him, solid in your faith.” 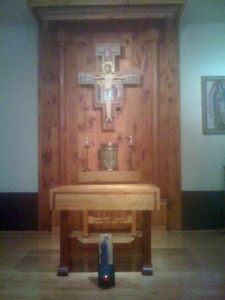 After the night prayer, the friars sing the “Salve Regina” and turned out all the lights in the chapel, leaving only one candle to illuminate the icon of Our Lady of Sorrows (photo, in front of the altar), and one light to shine on an image of Our Lady of Guadalupe, the patroness of this community.

The friars then pray the rosary — the sorrowful mysteries.

The repeated Hail Marys (which are scriptural, echoing the words of the angel Gabriel at the Annunciation) ripple like lake waves across the room, together with others in other rooms throughout the world. But the major networks are not reporting this, though millions are engaged tonight in this prayer.

The friars pray the closing prayer of the rosary, “Hail, Holy Queen.” The words that rang in my ear were at the end, where the prayer says, “Turn then, most gracious advocate, your eyes of mercy towards us, and after this our exile…”

“After this our exile.”

If we think we are at home in this world, and not in exile, we are mistaken, at least in part. Yes, the Incarnation signifies that this creation has been embraced, and saved, by God. But we are in exile here, not at home.

“O clement, O loving, O sweet virgin Mary… Pray for us that we may be made worthy of the promises of Christ.”

And then, the final prayer, the “Memorare”: “Remember, O most gracious Virgin Mary, that never was it known, that anyone who fled to your protection, implored your help, or sought your intercession, was left unaided…”

After the prayers, Father Jacob told me had just been ordained.

He then reminded me that the first blessings of a priest, during the first year after his ordination, are graced with a plenary indulgence — the remission of the temporal punishment attached to sins one has committed and repented of.

He then prayed and blessed me.

He prayed that the words I write in these messages in the future bring deeper faith and greater hope to many.

And after this, the friars studied, and slept, and the writer wrote.