The “foreign minister” of the Russian Orthodox Church, Metropolitan Hilarion Alfeyev, has been traveling — from Moscow, to Serbia, to Greece, to Mt. Athos, to Rome — and yesterday he met with Pope Benedict XVI

“The crisis which the Western society is undergoing has primarily spiritual roots.” —Metropolitan Hilarion, Russian Orthodox archbishop, speaking yesterday to the Catholic Bishops’ Synod in Rome

A Russian in Rome… 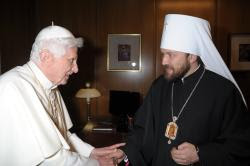 A Russian is in Rome.

And in this case, he is a high-ranking official of the Russian Orthodox Church.

When that happens, one has to pay attention, and keep a watch especially for any sign of “warming” in the relations between the Holy See and the Orthodox of Russia, for such a “warming” could potentially have global significance. And, in this case, since the present Pope is a German, the meeting of two leaders, one from Moscow, one from Rome, also, in a certain way, includes Berlin. Rome-Berlin-Moscow…

Are there signs of “warming”?

When Pope Benedict XVI, 85, met yesterday with Metropolitan Hilarion Alfeyev, 46, head of the Russian Orthodox Church’s Department for External Church Relations, the meeting (as one can see from the photo above) was cordial.

The two discussed common challenges: the growing secularization of the “post-Christian” West; ecumenical initiatives (possibly connected with a commemoration of the 1,700th anniversary of the Emperor Constantine’s Edict of Milan in 313 A.D., next year in 2013, a subject Hilarion has had much to say about recently); and a recent landmark agreement between the Russian Orthodox Church and the Catholic Church in Poland — old antagonists who are now, tentatively, seeking new ways to work together.

The Pope’s meeting with Hilarion came just after the Russian Orthodox archbishop delivered an address to the Synod of Bishops meeting in the Vatican to discuss the “new evangelization” needed to preach Gospel again to a part of the world that seems to have abandoned a faith it once cherished: the West.

Below we have the text of Hilarion’s address to the Catholic bishops, and, at the end, his recent address on Constantine’s edict, as well as some small reports on his travels.

Speaking with Vatican Radio’s Philippa Hitchen (who in the past wrote for Inside the Vatican magazine), Metropolitan Hilarion, also himself an old friend of the magazine (we helped him to organize concerts of music he composed in Rome in March 2007, and in Washington D.C., New York, and Boston, in December 2007) shared details of his conversation with the Pope.

“His Holiness was curious about what is happening in Russia,” Hilarion said. “He posed many questions about the teaching of religion in schools and the opening of theology faculties in some secular universities. I shared with him information about the life of the Russian Orthodox Church and the new evangelization we are practicing in the Russian Federation.

“We also spoke about the persecution of Christians in the Middle East and other parts of the world,” Hilarion continued. “And we also talked about the development of relations between Catholics and Orthodox, in particular the development of theological exchanges, because, since my last meeting with the Pope, I have also been appointed chairman of the (Russian Orthodox Church) Synod’s Biblical and Theological Commission.”

One “take-away” from these remarks is that “Rome” and “Moscow” (the “third Rome”) may be ready to act jointly to defend Christians suffering from persecution in the Middle East.

Since Russia has a long-time, deep-rooted interest in Syria, and in other parts of the Middle East where there are large Orthodox populations, this is a signal that bears watching.

Note how, in the text below, Hilarion speaks to the Catholics about “combining our efforts.”

And note that he says: “We are deeply concerned about the humanitarian catastrophe which is unfolding in Syria”…

(I have added the italics in the texts below to highlight these passages.)