And some reflections on Pope Paul VI and the liturgical reform…

By Robert Moynihan, reporting from Rome

The excommunicated African archbishop, Emmanuel Milingo, was in Rome this morning.

I met him and spoke with him for about half an hour.

Years ago, Milingo (photo) became known in Africa and Italy for his dramatic exorcisms (he performed them though he was never an official Church exorcist, he told me today).

He also conducted very emotional faith healing services (I attended one in Rome a decade or so ago; some 4,000 people were present, and there was much singing, some uncanny screaming, and dozens of people falling limply to the floor.)

In 2001, despite being a Catholic archbishop, Milingo, then 71, married a 43-year-old Korean woman named Maria Sung in a group marriage ceremony organized by Sun Myung Moon, the founder of the Unification Church, in New York City. (photo below)

Milingo was summoned immediately to the Vatican. 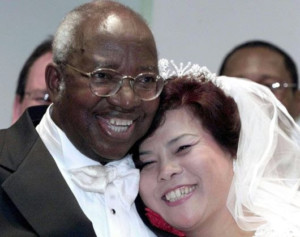 Under protest, he agreed to separate from Maria Sung. She went on a public hunger strike.

Milingo then spent a year in a Capuchin monastery in Argentina in penitential prayer.

After that, there was relative silence for several years.

Milingo emerged publicly again in 2006 as an advocate of allowing Latin rite priests to marry.

On September 24, 2006, came a fateful act: he consecrated four married Catholic men as bishops without the approval of the Pope, and was excommunicated latae sententiae. (The Church does not recognize the consecrations as valid.)

Milingo then took back Maria Sung, and she now lives with him, he told me.

The trajectory of Milingo’s life seems to mirror the confusions of our age.

In 1969, when Milingo was only 39, Pope Paul VI consecrated him as the bishop of the archdiocese of Lusaka, capital of Zambia.

He was one of the first and youngest native African bishops, one of the bright hopes for the future of the Church in Africa.

By 1983, he was asked to step down because he was performing exorcisms and faith healings unapproved by Church authorities. He came to Rome — and continued to attract thousands to his faith-healing gatherings.

In 2001 came his marriage, and in 2006 the consecrations and consequent excommunication.

It has been estimated that, since the Second Vatican Council, some 110,000 Roman Catholic priests worldwide have left the priesthood and been married.

In October 2007, Milingo’s Vatican passport was revoked, ending his status as a person with diplomatic protection from the Vatican City State.

Milingo is still seemingly in good health, and still claims to be fully Catholic in his beliefs (“I celebrate Mass daily,” he told me), but he seemed a sad a lonely figure as I left him.

A young Korean man told me he was traveling with Milingo and that they were flying today to Korea.

I also had an interesting meeting today with one of the most learned Vatican officials I have known, Father Peter Gumpel, S.J. (He once told me that that is not his real name).

Gumpel, now 86, has been for many years the head of the Vatican’s investigation into the life of Pope Pius XII in support of his cause of sainthood. (The photo shows his as he looked a few years ago.)

We had a long discussion about the Second World War, and the role of Pope Pius XII during that war, including a detailed discussion of Pius’ attitude toward Hitler.

In fact, he met him when he was just six years old, in 1929, when Pacelli was the Vatican Nuncio in Germany. (The photo shows Pacelli as he looked in about 1930.)

“Whenever other people came to the house, and saw me, they always said to my parents, in order to flatter them and make them feel good, ‘Oh what a beautiful child!'” Gumpel told me. “But I could look in the mirror, and I knew it wasn’t really true. Pius XII was different. There was no flattery from him. When he visited our house, just before he left Germany, he spoke with me directly, even though I was a little child, and asked me serious questions. I appreciated that difference in him very much. It struck me at the time, and I’ve never forgotten it.”

Letter from a Reader about the Liturgy

I just received this letter from a reader:

These newsflashes are really informative and important for many of us to help us understand what is going on in Roma.

Given some of the past (and somewhat unfinished) newsflashes, I was wondering if you had seen this, from Fr. Anthony Chadwick (TAC priest in France) on his Civitas Dei web site http://pagesperso-orange.fr/civitas.dei/reflections10.09.htm, translating from a French traditionalist email group:

(Note: here follows the text from the web site; the incident occurred in about 1974.)

Father Louis Bouyer (photo): I wrote to the Holy Father, Pope Paul VI, to tender my resignation as member of the Commission charged with the Liturgical Reform. The Holy Father sent for me at once (and the following conversation ensued):

Paul VI: Father, you are an unquestionable and unquestioned authority by your deep knowledge of the Church’s liturgy and Tradition, and a specialist in this field. I do not understand why you have sent me your resignation, whilst your presence, is more than precious, it is indispensable!

Father Bouyer: Most Holy Father, if I am a specialist in this field, I tell you very simply that I resign because I do not agree with the reforms you are imposing! Why do you take no notice of the remarks we send you, and why do you do the opposite?

Paul VI: But I don’t understand: I’m not imposing anything. I have never imposed anything in this field. I have complete trust in your competence and your propositions. It is you who are sending me proposals. When Fr. Bugnini comes to see me, he says: “Here is what the experts are asking for.” And as you are an expert in this matter, I accept your judgement.

Father Bouyer: And meanwhile, when we have studied a question, and have chosen what we can propose to you, in conscience, Father Bugnini took our text, and, then said to us that, having consulted you: “The Holy Father wants you to introduce these changes into the liturgy.” And since I don’t agree with your propositions, because they break with the Tradition of the Church, then I tender my resignation.

Paul VI: But not at all, Father, believe me, Father Bugnini tells me exactly the contrary: I have never refused a single one of your proposals. Father Bugnini came to find me and said: “The experts of the Commission charged with the Liturgical Reform asked for this and that”. And since I am not a liturgical specialist, I tell you again, I have always accepted your judgement. I never said that to Monsignor Bugnini. I was deceived. Father Bugnini deceived me and deceived you.

Father Bouyer: That is, my dear friends, how the liturgical reform was done!

(The letter to me then continues):

Of course, this plays into the I think unfinished story you were recounting about Cardinal Gagnon’s investigation, and the aftermath. I must add that I saw on another traditionalist list group a few years back the comment from Prof. Luc Perrin (Strasbourg) that he himself had a typescript copy of Fr. Bouyer’s memoirs, which could not then be published due to family opposition or something of the sort, but that they contained bombshells…

Keep up the good work and all the best,

Here is the original French version of this early 1970s conversation between Father Bouyer and Pope Paul VI, which the English translator, Father Anthony Chadwick, says he found here:

However, the original source seems to be the following: http://www.hermas.info/article-36681786.html.

This is a web site and article authored by Monsignor Jacques Masson (photo), a traditional Catholic French priest.

Monsignor Masson writes that Father Louiss Bouyer, a priest of the Oratory, was a consultor at the Second Vatican Council, and a prominent figure in the litrugical movement prior to the Council.

After the Council, however, Masson says, Bouyer “denounced violently” the “deviations” in the implementation of the Church’s liturgical reform.

Masson then says the seminarians of Archbishop Marcel Lefebvre’s Society of St. Pius X, studying at Econe in Switzerland, once had a long conversation with Father Bouyer.

During that conversation, Bouyer recounted how he gave Pope Paul VI his resignation from the commission charged with implementing the liturgical reform, Masson tells us.

That is the source of the account he has given here, he says.

Here are Masson’s words in the original French:

Is this interesting conversation between Father Bouyer and Paul VI, which Father Bouyer related to the seminarians, really authentic?

In other words, did Paul VI actually say these words about Monsignor Annibale Bugnini, the principle author of the new Mass, to Father Bouyer?

Monsignor Masson says yes, that this is precisely what Father Bouyer told him and the other Econe seminarians.

But, of course, this is still second-hand evidence.

Still, it does at least suggest that it might be important to seek out Father Bouyer’s notes and diaries, if he left any.

Today, 40 and more years after the fact, it is not easy to know the truth about the events during the Council and shortly after, whether in regard to the liturgy, or in regard to other matters, and as time goes on, it seems likely to become ever more difficult.

But before more time passes, we will make an effort to speak to those who lived through those times, and record their testimony for posterity.