Pope at All Souls’ Mass: The Christian’s place is in the wounded hands of God

Pope at All Souls’ Mass: The Christian’s place is in the wounded hands of God 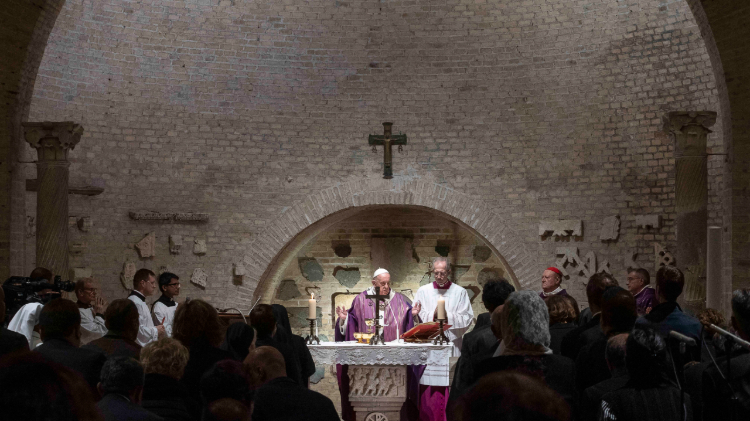 For All Souls’ Day, Pope Francis offered the Holy Sacrifice of the Mass in the Catacombs of Priscilla in Rome.

Visiting a catacomb for the first time, Pope Francis offered the Mass for the souls of all the faithful departed On All Souls’ Day.

“The celebration of the feast of all the dead in a catacomb”, the Pope said, “tells us many things”. In particular, it reminds us of those who are persecuted for the faith – not only the ancient Christians, but Christians today, who have to pretend to have a party or celebrate a birthday in order to participate in the liturgy. The Holy Father recalled once again that there are many places, even today, where that is true; indeed there are even more Christians persecuted today than in the ages of persecution.

In his homily, Pope Francis focused on three words: identity, place, and hope.

The Beatitudes: the identity of the Christian

The identity of a Christian, he said, is the same now as it was in ages past. “The identity of the Christian is this: the Beatitudes. There is no other”, he said. And to better understand this, he pointed to another Gospel passage, the twenty-fifth chapter of St Matthew, where Jesus says that we will be judged based on how we treat “the least of these My brethren”. “With these two passages”, the Pope said, “the Beatitudes and the great protocol [of Matthew 25], we will show, by living them, our identity of as Christians”.

In the hands of God

The setting of the catacombs call to mind the second word, “place”. What is the “place” of Christians? the Pope asked. Referring to Wisdom 3:1, Pope Francis said “the place of the Christian is in the hands of God, where God wants [them]”. The hands of God, he said, are the “wounded” hands of Jesus, the only Son of the Father, Who “wanted to take the wounds with Him so that they could be seen by the Father and intercede for us”.

Our hope is in heaven

Christians, with their identity cards, and safe in the hands of God, “are men and women of hope”, the Pope continued. This third word can be found in the readings for the day, which share the “final vision where everything is re-made, where everything is re-created, that homeland where we will all go”. Using the analogy of an anchor, Pope Francis said “our hope is in heaven, our hope is anchored there, and we, with the rope in our hand, support ourselves by looking at the bank of the river we have to cross”.