Pope at Angelus: ‘Be Peacemakers, Witnesses of Hope’

Pope at Angelus: ‘Be Peacemakers, Witnesses of Hope’ 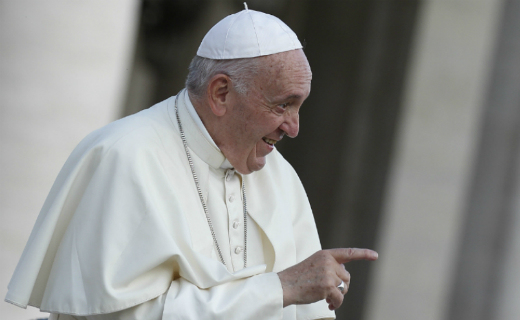 Pope Francis invites the faithful to live their lives responding to hatred with love, to offence with forgiveness, and to always be attentive and loving towards the poor.

November 17, 2019
Pope Francis on Sunday reflected on the Gospel reading on this penultimate Sunday of the liturgical year and invited believers to collaborate with the Lord in the construction of history, becoming, together with Him, peacemakers and witnesses of hope in a future of salvation and resurrection.

He was addressing the pilgrims gathered in St. Peter’s Square for the Angelus prayer shortly having celebrated Holy Mass in the Basilica on the World Day of the Poor.

Gospel of the Day

Referring to the Gospel of Luke which tells of Jesus’ discourse on the end of time, the Pope said he uses two apparently contrasting images: the first is a series of frightening events like catastrophes, wars, famines, riots and persecutions, while the other is reassuring as he says: “not a hair on your head will be destroyed.”

Pope Francis explained that on the one hand Jesus offers a realistic view of history, marked by calamities,  violence, and traumas, and on the other he indicates the attitude of hope in Lord that Christians must adopt within this history.

“It is an attitude of hope in God that makes it possible not to let oneself be overwhelmed by tragic events,” he said.

And stressing that Christ’s disciples cannot be slaves to fear and anxieties, the Pope said they are called to live history stemming the destructive force of evil with the certainty of God’s loving action and reassuring tenderness.

Sure of the fact that notwithstanding the uncertain unfolding of the events of history, the Pope said Christians know that their lives cannot be lost because they are in His hands.

And he called on all believers to collaborate with the Lord in the construction of history, “becoming, together with Him, peacemakers and witnesses of hope in a future of salvation and resurrection”.

Faith, he said, “makes us walk with Jesus along the winding paths of this world, in the certainty that the power of his Spirit will bend the forces of evil, subjecting them to the power of God’s love.”

The Example of the Martyrs of Our Times

The Pope concluded his reflection upholding the example of the Christian martyrs of our times whom, he said, despite persecution, are men and women of peace.

“They give us a legacy to safeguard and imitate: the Gospel of love and mercy. This is the most precious treasure that has been given to us and the most effective testimony that we can give to our contemporaries, responding to hatred with love, to offense with forgiveness,” he said.

World Day of the Poor

After praying the Angelus, Pope Francis reminded those present that Sunday, 17 November, marks the 3rd World Day of the Poor and he expressed his thanks to all those, in dioceses and parishes throughout the world, who have promoted initiatives of solidarity for those most in need. He also reminded everyone to always “bear witness to the attention that must never be lacking towards these brothers and sisters or ours”.

“I have just seen, a few minutes ago, some statistics regarding poverty”, he said, and he noted that “society’s indifference towards the poor” causes pain.

Finally, Pope Francis said that on Tuesday he is scheduled to set off on an apostolic visit to Thailand and Japan, and he asked those present for prayers.