Pope at Mass: worldliness, a slow slide into sin

Pope at Mass: worldliness, a slow slide into sin 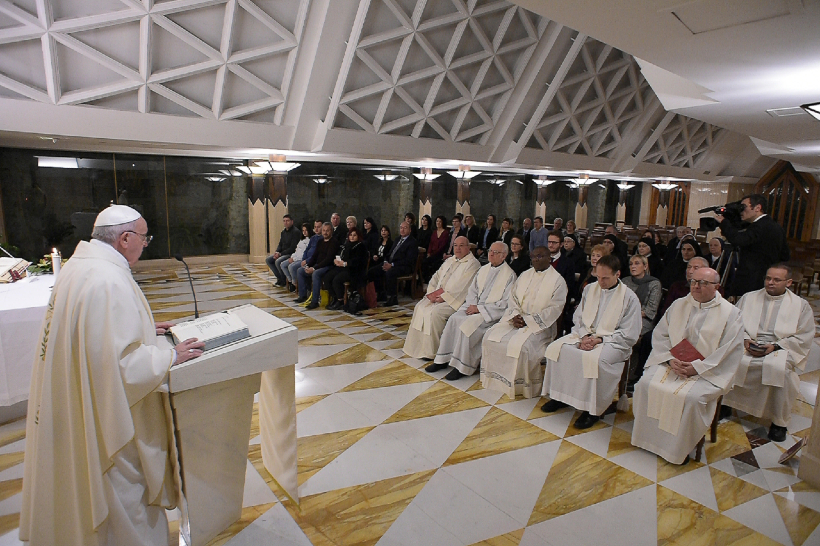 One of the evils of our time is to slip into a state where one loses the sense of sin. Pope Francis made the point in his homily at Mass Friday morning at the Casa Santa Marta, noting that even a holy king like David had fallen into this temptation. Worldliness, he said, is at the root of this.

Reflecting on King David in the First Reading, Pope Francis, in his homily, noted that the King of Israel had slipped into a comfortable life, forgetting he was elected by God.  He spoke about a normal, quiet life where a heart that remains unperturbed even in the face of the most serious sins, saying, it is a worldliness that robs us of the sense of sin and evil.

Pope Francis mentioned the sins of David such as the census of the people and the story of Uriah whom he got killed after making his wife, Bathsheba, pregnant.  He chose murder because his plan to put things right, after adultery, failed miserably. David continued his normal life quietly and his heart did not move.

Pope Francis wondered how the great David, who was holy, who had done so many good things and who was so united with God, could have done that. This did not happen overnight, the Pope said, adding, David slipped slowly.  He noted that there are sins of the moment, such as anger or insult that one cannot control, but there are also sins into which one slips slowly, with the spirit of worldliness.  It’s the spirit of the world, the Pope said, that leads you to do these things as if they were normal. “An assassination…!”

“Slowly” is an adverb that the Pope often uses to explain the way sin slowly takes hold of a person taking advantage of his or her comfort.  He admitted that all are all sinners, but sometimes we sin on the spur of the moment, such as getting angry or insulting, but then we repent.   Sometimes, instead, “we let ourselves slip into a state where life seems normal”, such as not paying the maid as you should or paying half what one should pay workers in the field.

The Holy Father said they seem to be good people who go to Mass every Sunday and who call themselves Christians. He explained they do all this and other sins because they have slipped into a state where they have lost the awareness of sin, which,  according to Pope Pius XII, is one of the evils of our time.  One can do anything…and, in the end, one spends a lifetime solving a problem.

The slap of life

The Pope pointed out that these are not ancient things.  He recalled a recent incident in Argentina in which some young rugby players killed a comrade in a nightlife fight.   The boys, he said, became “a pack of wolves”, which raises questions about the education of young people and about society.  The Pope said, we often need a “slap of life” to stop this slow slide into sin. It takes someone like the prophet Nathan, sent by God to David, to show him his mistake.

Pope Francis urged Christians to think a little about the spiritual atmosphere of one’s life? “I am careful and  always need someone to tell me the truth, the reproach of some friend, the confessor, the husband, the wife or children, who help me a little?”  The story of the fall of a Holy King like David, the Pope said, should make us realize that it can also happen to us and we should be careful.  We should also be aware of the atmosphere we live in.  Pope Francis concluded urging that the Lord send us a prophet, such a neighbor, a son, a mother or a father, who slaps us a little when we are slipping into this atmosphere where everything seems to be lawful.