An interview with Robert Siefker, engineer and Shroud of Turin expert

By James Bertrand for Inside the Vatican 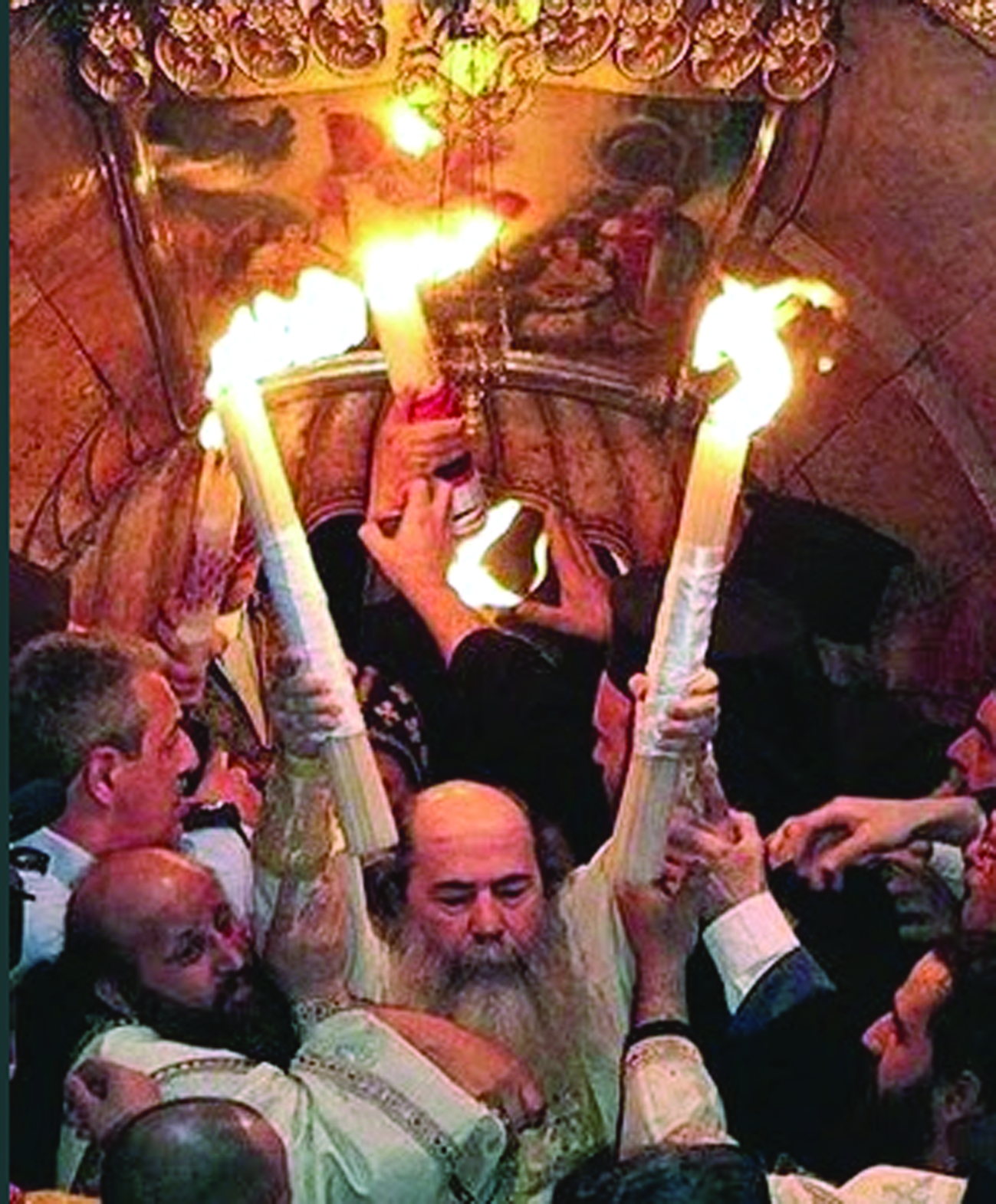 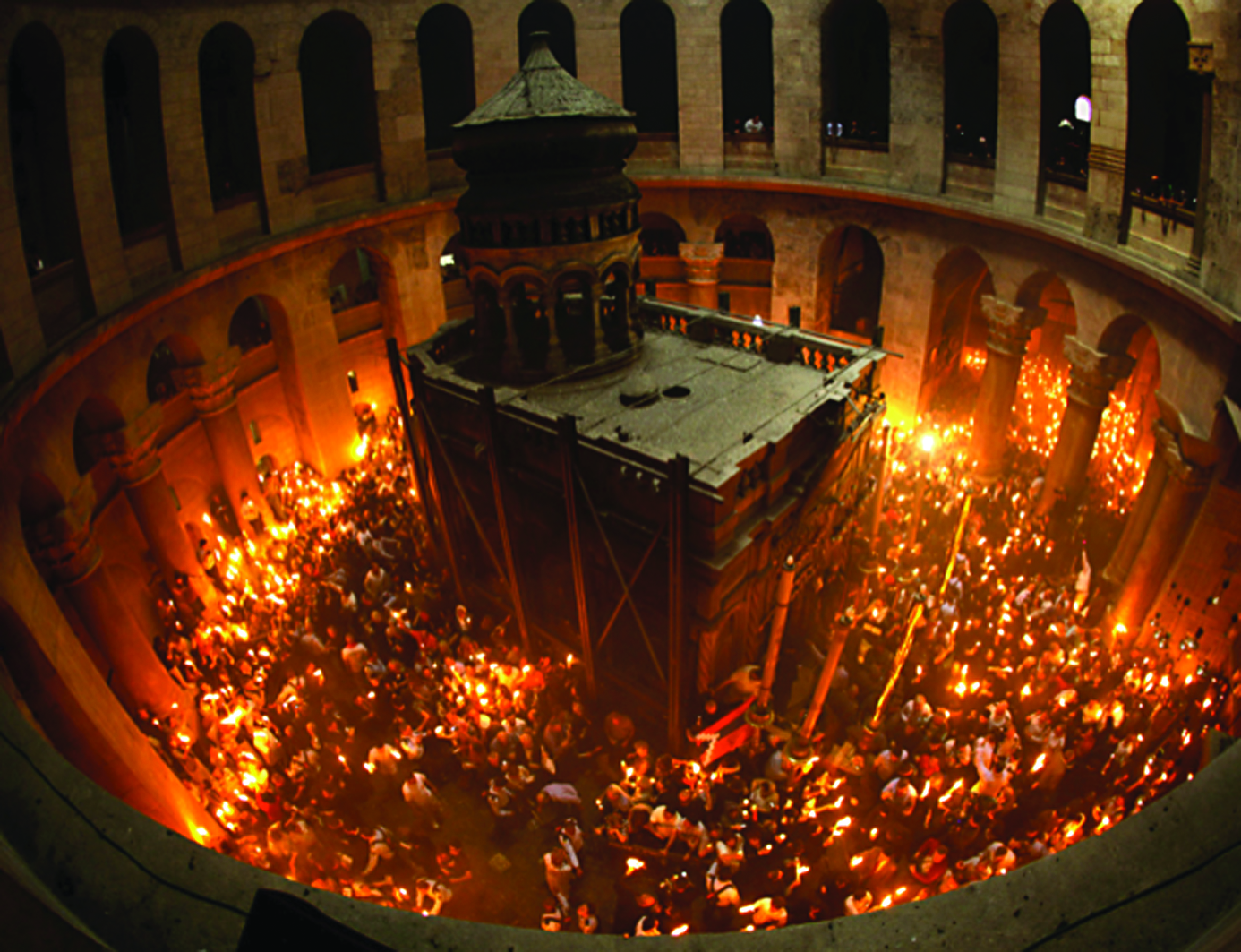 Images of the Holy Fire from the tomb of Jesus in Jerusalem, and the candles lit from it

James Bertrand, an expert on the Shroud of Turin in his own right – he has made over 200 presentations about the Shroud in 12 US states and New Zealand – interviewed engineer and veteran Shroud researcher Robert Siefker on the startling relationship that is being uncovered between the Shroud of Turin and the “Holy Fire” phenomenon of Orthodox Holy Saturday in Jerusalem.

For more than 1,000 years, since before the Great Schism separating Eastern and Western Christianity in 1054, the Eastern Orthodox have celebrated a yearly Paschal ceremony at the Tomb of Christ in Jerusalem, in which a mysterious, non-consuming fire appears, emanating from the Tomb, and from which one of the Patriarchs lights candles and lanterns which carry the Holy Fire to many countries.

The Holy Fire phenomenon has, up to now, not been well known in the West, but it may become a more familiar object of inquiry now that recent research suggests a similarity between it and the origin of the Shroud. Mr. Bertrand recently interviewed Mr. Siefker on the topic, exclusively for Inside the Vatican. 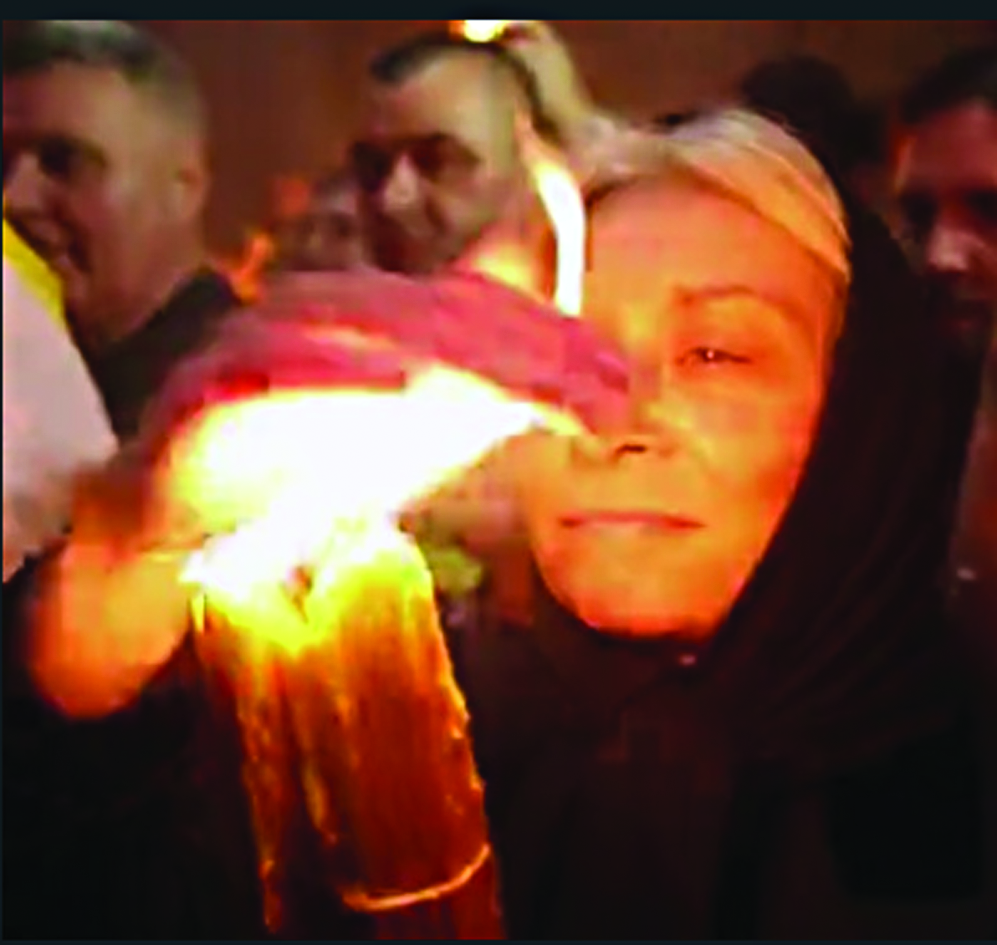 Inside the Vatican: I understand that you were an engineer by profession. Could you elaborate on that? And what was it that led you to your decade-plus study on the Holy Shroud, and now your focus on studies of the Miracle of the Holy Fire?

ROBERT SIEFKER: Yes, I graduated from college with an engineering degree on a U.S. Navy scholarship, then served in the Navy Civil Engineer Corps for five years. I finished my Navy years at Moffett Field Naval Air Station located in California as the Public Works Engineering Officer. Subsequently, I pursued a civilian career in software development, eventually serving as vice president of software development for two different software companies, the first located in California and the second in Colorado where I was able to retire at the age of 55 after the company went public.

It was in Colorado that I was introduced to the Turin Shroud Center of Colorado (TSC), headed by Dr. John Jackson, PhD in physics. Dr. Jackson was the leader of the 1978 Shroud of Turin Research Project (STURP) that conducted the most extensive scientific handson examination of the Shroud that has ever been conducted. I became essentially a full-time volunteer for TSC for well over a decade and a half. I read every word of every scientific paper published by the STURP team, every Shroud book and technical paper I could put my hands on, and pestered Dr. Jackson with uncountable questions, which he always worked to answer. I built a website for TSC and was co-author and editor of the TSC book on the Shroud entitled The Shroud of Turin: A Critical Summary of Observations, Data and Hypotheses.

My years of Shroud studies have planted in me a firm judgment that the Shroud is indeed the actual burial cloth of Jesus of Nazareth. However, there always remained one lingering and nagging question. In spite of a strong scientific consensus that the image on the Shroud is related to the action of radiation or light, there has, until now, never been a fully satisfying explanation for the nature of that source of light. On July 10, 2019, everything changed. A new paper by the well-known and highly-respected Italian Shroud scientist Giulio Fanti was published. (Fanti and co-author Pierandrea Malfi had previously published one of the most complete and authoritative books on the Shroud, The Shroud of Turin: First Century After Christ!) The paper was entitled Is the “Holy Fire” Related to the Turin Shroud? In his paper Fanti provides compelling evidence that the “Holy Fire” phenomenon that occurs on Orthodox Holy Saturday every year in the tomb of Jesus in Jerusalem reveals the source of the image on the Shroud. (Find Giulio Fanti’s paper online here: https://juniperpublishers.com/gjaa/pdf/GJAA.MS.ID. 555782.pdf). 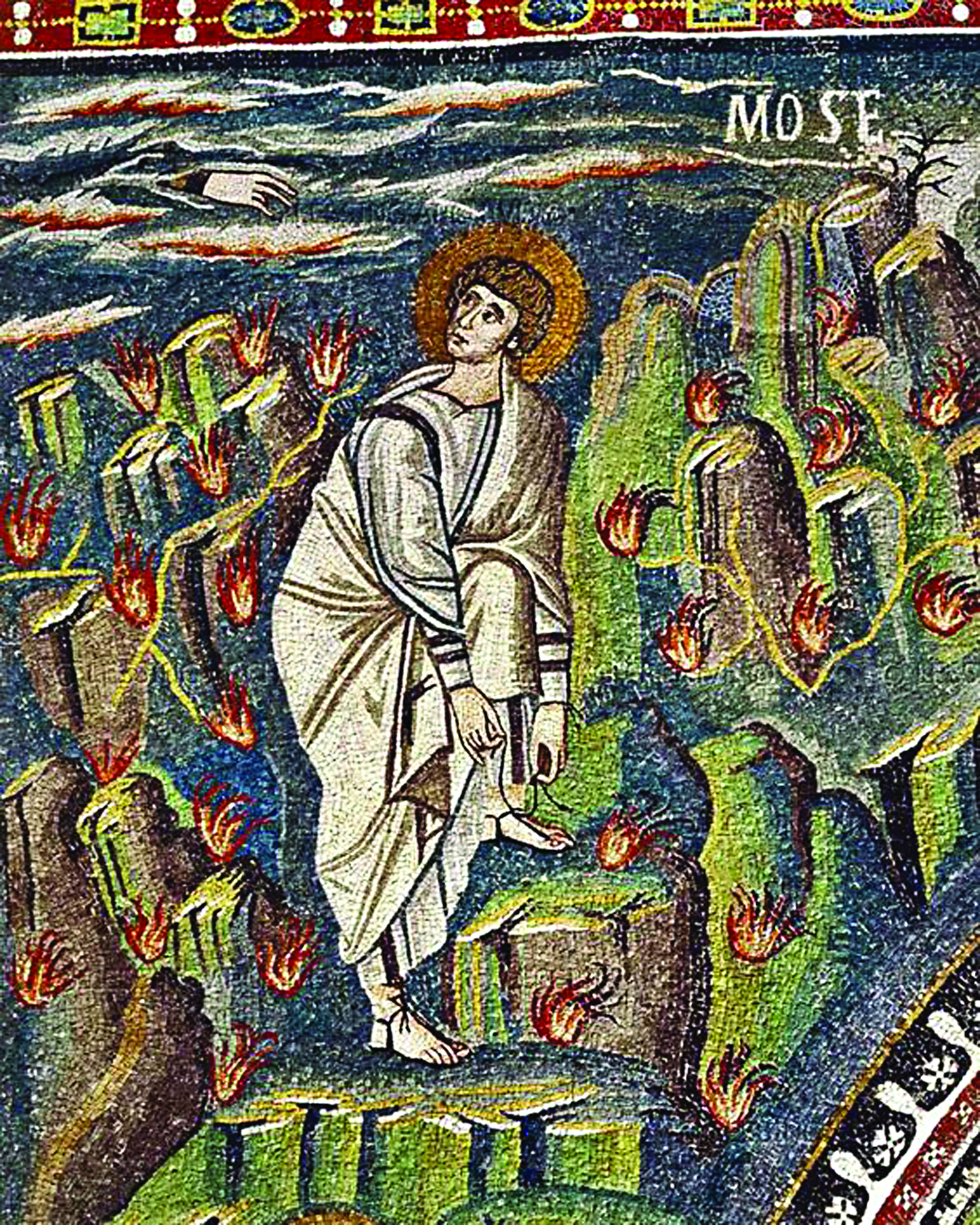 Moses and the burning bush in a mosaic in the Basilica of San Vitale in Ravenna, Italy.

“And the angel of the Lord appeared to him (Moses) in a flame of fire out of the midst of a bush… the bush was burning, yet not consumed.” (Exodus 3:2)

I was shocked by Fanti’s paper. Until I read Fanti’s paper I had not in my life ever heard of the Miracle of the Holy Fire. I emailed Giulio congratulations on his extraordinary paper. He responded asking if I would be interested in helping to schedule tasks associated with research he planned on the phenomenon. Of course, I answered yes. Subsequently, I helped schedule further research on the Miracle of the Holy Fire in 2020 and 2021. However, both years the world-wide coronavirus pandemic forced cancellation of plans for the Fanti Research Team to travel to Jerusalem.

To what do you attribute the fact that you, as a life-long Catholic living in the United States, had never even heard of the Miracle of the Holy Fire?

SIEFKER: I was familiar with Biblical stories that alluded to what might be called “Holy Fire” — fire that does not consume. Even as a child I knew the story in the Book of Exodus where it is reported, “And the angel of the Lord appeared to him (Moses) in a flame of fire out of the midst of a bush. He looked, and behold, the bush was burning, yet it was not consumed.” (Exodus 3:2) Another familiar “story” I heard was from the Book of Daniel where Babylonian King Nebuchadnezzar sought to execute the young Jewish men Shadrach, Meshach, and Abednego who would not worship the Babylonian golden image that Nebuchadnezzar had constructed and thus, “Shadrach, Meshach, and Abednego were thrown into a super-hot-burning furnace to be burned alive — but the fire did not consume them.” (Daniel 3:91-94).

An icon showing the faithful young Jewish men who would not worship the Babylonian golden image Nebuchadnezzar had constructed.

Nevertheless, I had never heard of the Ceremony of the Holy Fire on Orthodox Holy Saturday until I read about it in Fanti’s paper. The Ceremony of the Holy Fire is associated with the Eastern Orthodox Church. It is simply not well known in the West to Catholics, like myself, and Protestant Christians. Church politics that separate believing Christians, Eastern from Western, is the unfortunate cause.

What were some of the more significant findings enumerated in Fanti’s 2019 paper based on his experimental measurements taken on Orthodox Holy Saturday, April 27, 2019, in the Holy Sepulcher in Jerusalem?

Fanti, most significantly, reported that his measurements show that the flame of a candle in his possession that was ignited by the distributed Holy Fire and the flame of a separate control candle, ignited by a normal lighter, were spectrally indistinguishable. However, Fanti found the effects of the separate candles to be radically different on objects directly exposed to their separate individual flames. The Holy Fire was much cooler. The Holy Fire flame was found to be “non-consuming” of objects exposed to it. Fanti found the phenomenon to persist for a period of approximately 20 – 25 minutes after the first emergence of the Holy Fire flame in the hands of the Orthodox Patriarch. There is no naturalistic explanation for this difference! Fanti’s results are in agreement with previous measurements conducted by Russian physicist Andrey Volkov in 2008, and Archpriest Gennady Zaridze of the Russian Association of Orthodox scientists in 2016.

Fanti exposed his face and beard to the flame of the candle ignited by the Holy Fire. The flame did not burn his beard and there was no burning or pain on his face associated with the areas exposed to the flame.

It has been suggested by Fanti that the mechanism for the image on the Holy Shroud may be linked to the phenomenon of the Miracle of the Holy Fire. Can you put this into words for us?

SIEFKER: Fanti has shown that Shroud-like linen samples exposed to the flame of the Holy Fire candle were only very lightly and superficially singed, similar to the actual image-bearing cloth fibers on the Shroud. The “hot” flame of the control candle on the other hand heavily scorched the same Shroud-like linen fabric.

In summary, Fanti’s empirical findings show that the Shroud and the LIGHT from the Holy Fire lock up in a relationship neither the Shroud alone, nor the LIGHT alone, can ever approach in power! As this relationship becomes more generally known, the world will be changed. When Jesus of Nazareth said to Jewish scribes and Pharisees that he would give them just one sign, the sign of Jonah, he clearly wasn’t speaking only to that specific first-century audience. He was speaking to all generations. Fanti’s linking of the Holy Fire to the image on the Shroud of Turin is profound—nothing but a worldchanging sign, forcefully pointing to one event in history, the resurrection of Jesus of Nazareth.

Your ardor in recognizing the potential world-changing connection between the Holy Fire and the Shroud makes us look forward to hearing more about this in the future. What should we especially be paying attention to as time goes by?

People can read a book about the Shroud and, because of its complexity, come away without a judgment of authenticity. So, I now strongly recommend to people that they take another careful look at the Shroud in “light” of the Holy Fire.

The phenomenon of the Holy Fire is simple — it is not complex. It is a phenomenon that is binary — it is either a miracle of a non-consuming fire, or it is not. If it is a miracle, as Fanti’s work suggests, then the image on the Shroud has an empirically based explanation — God’s Miraculous Light.

So, please read Fanti’s paper and work to pass along what you have learned and urge people to pay attention as new measurements are made and reported over the next year or two.

We are in for a very interesting moment in history. You can be sure proponents of Naturalism and secularism will fight it tooth and nail. All Christians need to become familiar with the relationship between the Shroud and the Holy Fire — and to help spread the knowledge of that relationship. Become involved!