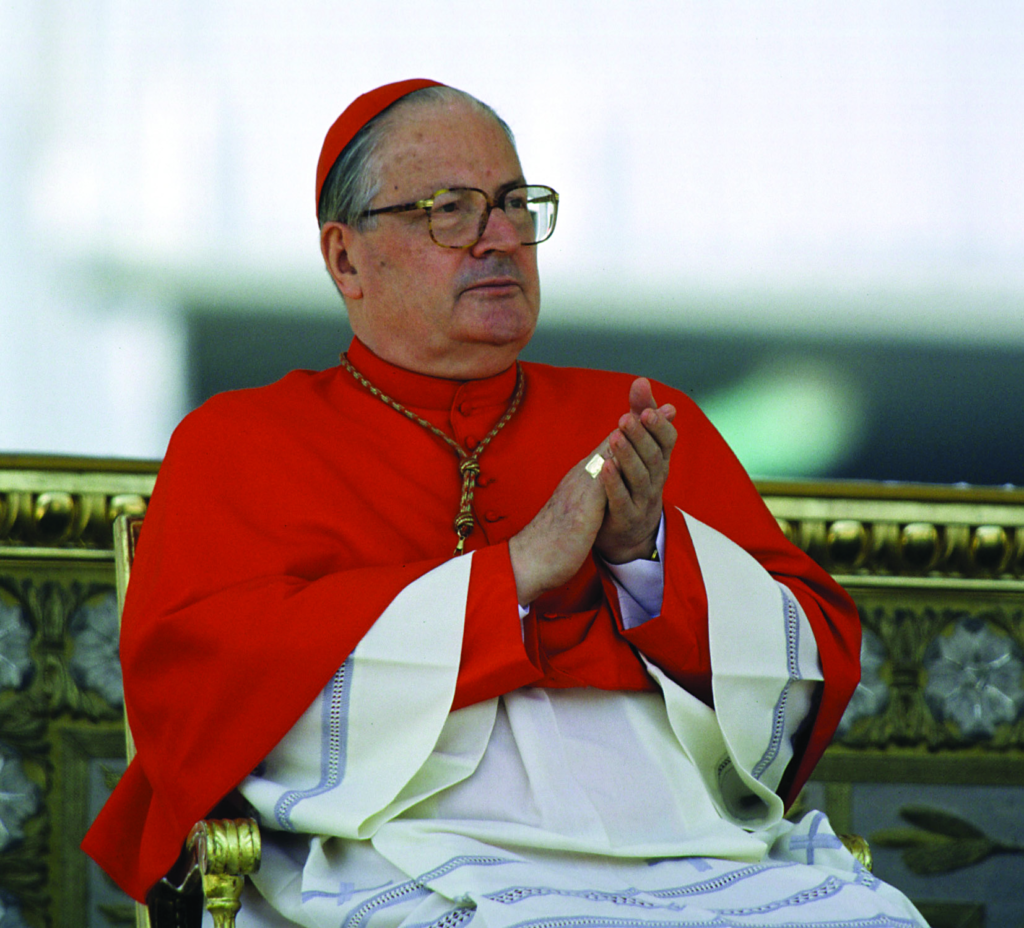 Cardinal Angelo Sodano, former Vatican Secretary of State and former Dean of the College of Cardinals, died in Rome May 27 at the age of 94.

According to Vatican News, Cardinal Sodano had been hospitalized since early May for treatment of pneumonia after testing positive for COVID-19.

Pope Francis attended the funeral Mass for Cardinal Sodano in St. Peter’s Basilica on May 31. Cardinal Giovanni Battista Re, the dean of the College of Cardinals, was the main celebrant.

The 85-year-old Pope, who led the Rites of Final Commendation, was seated in a wheelchair as the Mass was celebrated at the Altar of the Chair.

Pope John Paul named Cardinal Sodano Secretary of State in late 1990. He had been the Vatican’s “foreign minister,” heading the Secretariat of State’s Section for Relations with States. He had already spent three decades in the Vatican’s diplomatic service, mainly in Latin America.

He remained in office for the first 17 months of the pontificate of Pope Benedict XVI and served as dean of the College of Cardinals from 2005 to 2019. After he stepped down, Pope Francis issued a law giving the office of dean a five-year term.

Many observers saw him as a key player in the Vatican’s slow response to the clerical sexual abuse scandal, particularly in the case of the late Father Marcial Maciel Degollado, founder of the Legionaries of Christ.

In a message of condolence May 28 to the cardinal’s family, Pope Francis said the cardinal had “lived his priesthood with generosity” briefly in his home diocese of Asti, Italy, and “then, for the rest of his long life, in the service of the Holy See.”

While Cardinal Sodano was criticized for his apparent closeness to Chilean dictator Augusto Pinochet, Pope Francis said that, in his service as a Vatican diplomat in Ecuador, Uruguay and Chile, “he zealously dedicated himself to the good of those peoples, promoting dialogue and reconciliation.”

Born on November 23, 1927, the second of six children, in Isola d’Asti, Italy, he studied at the local seminary before moving to Rome. He was ordained a priest in 1950 and taught at the Asti seminary.

With a doctorate in theology from Rome’s Pontifical Gregorian University and a doctorate in canon law from the Pontifical Lateran University, he joined the Vatican diplomatic corps in 1959. St. Paul VI named him an archbishop and nuncio to Chile, and he was ordained a bishop January 15, 1978. St. John Paul II called him back to the Vatican in 1988 and in 1989 named him Secretary for Relations with States, in effect, the Vatican foreign minister.

The cardinal’s final years were overshadowed by allegations that he covered up sexual abuse by Legionaries of Christ founder Marcial Maciel, former U.S. Cardinal Theodore McCarrick, and others. Sodano’s name was mentioned 30 times in the McCarrick Report, published in 2020.

At the funeral, Cardinal Re said: “In the nearly 16 years that he was the Pope’s first collaborator, he worked with competence and dedication on behalf of peace.”

Following Pope Benedict XVI’s election in 2005, Sodano was elected dean of the College of Cardinals. In that role, he preached at the Mass in 2013 before the conclave that elected Pope Francis.

Addressing his fellow cardinals, he said: “My brothers, let us pray that the Lord will grant us a pontiff who will embrace this noble mission [of charity] with a generous heart.”

“May the angels lead you into paradise” 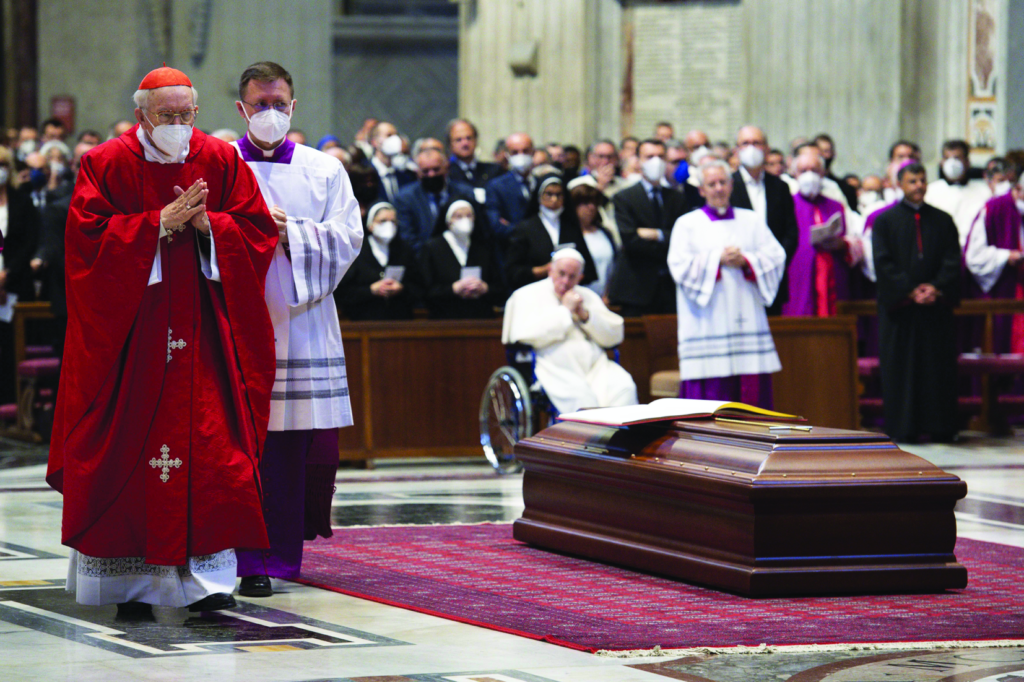 The Church bid farewell to former Secretary of State Cardinal Angelo Sodano, at a Requiem Mass celebrated May 31 by Cardinal Giovanni Battista Re. In his homily, Cardinal Re recalled Sodano’s 71 years of priesthood and more than 60 years of service to the Holy See.

“In his long years of service to the Holy See, Cardinal Sodano firmly believed in Christ and followed Him faithfully, serving Him with love and dedication to the Church and His Vicar,” Cardinal Re said.

Cardinal Re noted that after being ordained in 1950, Sodano began his priestly service by teaching theology in the diocesan seminary and engaging in youth ministry.

“In the nearly 16 years that he was the Pope’s first collaborator, he worked with competence and dedication on behalf of peace,” said Cardinal Re. “Many of us were able to appreciate Cardinal Sodano up close,” he said, highlighting the late cardinal’s “gifts of intellect and heart, his sensitivity to the pastoral aims of the Church’s action in the world, his wisdom in assessing events and situations and his readiness to help, seeking appropriate solutions in every case.”

Commending Angelo Sodano’s soul to the mercy of Almighty God, Cardinal Re concluded his homily by inviting the faithful to make their own the Church’s prayer In Paradisum:

“May the angels lead you into paradise,

may the martyrs greet you at your arrival,

and lead you into the holy city of Jerusalem.” (CNA)

The Rise to Power of Cardinal Sodano

On May 28, 1988, John Paul II, who wanted to attribute — in a rather questionable way—the great success of his visit to Chile (1983) to Nuncio Sodano, called him to the Vatican to appoint him Secretary of the then-Council for Church Affairs. On March 1, 1989, with the entry into force of the Apostolic Constitution Pastor Bonus, Sodano then assumed the title of Secretary for Relations with States. The official biography of Sodano on the Vatican.va site at this point states: “On December 1, 1990, he was called by the confidence of the Holy Father to take on the Office of Pro-Secretary of State, becoming Secretary of State on June 29, 1991, once created Cardinal.”

From this moment on, the power of Cardinal Sodano became total, absolute, incontrovertible, and often more incisive than that of Pope John Paul II, who was very busy in his pastoral ministry, and subsequently very limited by his illnesses. The real, concrete, everyday government of the many, delicate, and tangled mechanisms of the life of the Church all passed into the hands of the Piedmontese cardinal born in Isola d’Asti.

In this long period there are painful events in the life of the Church, some even gruesome, which have up to now hurt the soul of the whole ecclesial community and for which Cardinal Sodano bears heavy responsibility.

Such is the coverage and protection of the serial pedophile Marcial Maciel, founder of the Legionaries of Christ, even when the then-Cardinal Prefect Joseph Ratzinger asked the Secretary of State in vain for different conduct towards the Mexican priest, then revered at the Vatican as a “saint” even if it was known that he was a great corruptor.

Or, there is the case of the never-clarified pedophilia affair involving the archbishop of Vienna, Cardinal Hans Wilhelm Groër (1995), which the current archbishop, Cardinal Christoph Schönborn, denounced years ago, accusing Sodano of blocking the creation of an investigative commission and therefore of sandbagging the matter. It will also be remembered that in public remarks to Pope Benedict XVI, Cardinal Sodano, then-Secretary of State, called the complaints on cases of clerical pedophilia “chatter” and never expressed a single word of solidarity toward the victims. Schönborn protested because, in his view, it was a real offense against abused people.

The life of the universal Church between 1991 and 2006 had an iron-gripped helmsman in Cardinal Angelo Sodano, who managed to shape most of the world’s episcopates according to his ideas, beliefs, interests, and projects. The cardinal, even after his retirement in 2006, continued as Dean to exercise important influence and surely when the history of this period is written, it will be possible to fully understand the different phases of the true role of Sodano in the Vatican in the time since he arrived at the Apostolic See 60 years ago.