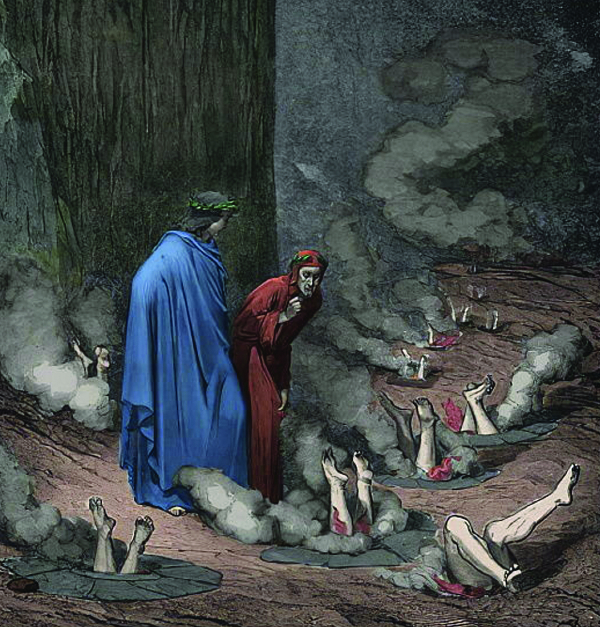 Dante Rebukes Pope Nicholas III, by Gustave Dorè, from the Inferno, Canto XIX, the circle of simoniacs. Simony is the act of selling Church offices and roles or sacred things

It is all too easy in these troublous times to become discouraged and disheartened. What preserves us from such despondency is the ability to see the bigger picture. We must see things as God sees them, as far as this is possible. We must see all of time, all of history, from the omnipresent perspective of eternity. There is no past or future with God. All is present to him. Since this is so, each of us is always present to him as is all of history.

A knowledge of history illustrates that the Church Militant, the Church at war within the devil’s domain, is always being besieged from without and betrayed from within. The pattern was established during the life of Christ and has woven its way through history for the past two thousand years. The secular powers, from Pilate and Herod onwards, have always had much more political power than the Church and have always been at war with Her. As for the soldiers of Christ, the pattern was established by the Apostles at the time of the Passion. Of the twelve men selected by Christ to be His inner sanctum, one was a traitor, ten were cowards, and only one had the courage to accompany Christ’s Mother to Golgotha, standing with her at the foot of the cross.

This same pattern is present throughout the whole history of the Church. For every single saint there are always ten cowards who run for cover as soon as times get hard or perilous; for every saint, there is always the traitor who is ready to betray Christ and His followers. This perennial pattern, woven through history, was present in the so-called good times, as well as in the bad.

It was present in the history of the middle ages, as is evident to all who have studied the medieval world and to all who have read the works of Dante and Chaucer. Even as the great cathedrals were being built, there were corrupt Popes and sometimes two or three different people claiming to be Pope at the same time. Even as the power of Christian Rome seemed triumphant, Popes were being exiled from Rome itself. Even as the great saints walked the earth, great sinners walked beside them. Even as the Church defined orthodoxy, the world was being ripped apart with heresy. For every saint in Dante’s depiction of the so-called “golden age” of Christendom, there is a sinner wallowing in his self-made hell. For every good and holy parson on Chaucer’s pilgrimage, there are drunk and avaricious friars and monks; for every noble and pious ploughman, there is an ignoble and uncouth miller.

The world is always at war with Christ and His Church, and the worldly within the Church are always in an unholy alliance with the world. The world, as the Salve Regina reminds us, is a vale (and veil) of tears and a land of exile. Nothing essential has changed, from the time of Christ to the present day, which means that everything essentially remains the same. 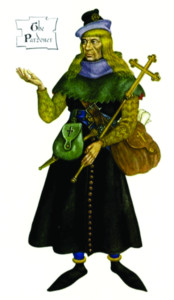 In Chaucer’s Canterbury Tales we see essentially the same unchanging humanity struggling with essentially the same unchanging problems. We see the same struggle between holiness and hedonism, sanctity and sin, virtue and vice. The seven deadly sins are as deadly now as they were in Chaucer’s time. They kill human society as surely as they kill the human soul. They destroy the sinner’s love of God and neighbor as surely as they destroy the wholeness or holiness of the self-centered self. Pride is still pride, and it still precedes a fall; lust is still lust, and it is as destructive to life and to marriage as it always was; avarice is still avarice, gluttony is still gluttony, sloth is still sloth, envy is still envy, wrath is still wrath, ad nauseam, ad infinitum. In Chaucer, as in Dante, we see Everyman, which is to say all of us, struggling with the perennial problems that have beset every generation of men throughout the countless centuries of human history.

Nothing has changed, everything remains the same. It is the same perennial pattern weaving its way through the centuries, timeless in design and woven with three distinct threads. The first thread is good; the strand of virtue or holiness. The second is bad; the strand of pride and viciousness. The third is beautiful; the strand that shines forth the glory of Creation.

Each of these three strands, representing the three dimensions of history, is a human thread, manifesting who we are: homo viator (the good man), homo superbus (the wicked man), and anthropos (the poet or sub-creator).

Homo viator is pilgrim man, or man on the quest for heaven, who struggles with the demons and dragons of life, assisted by the grace he needs. He knows that if he serves the Church Militant faithfully and courageously during his active service in this mortal life, he will be received into the Church Triumphant forever.

Homo superbus is proud man, the man who refuses the self-sacrifice necessary to follow the quest and who does his own thing, pursuing his own appetites. He holds sway outside the Church, and is present within the ranks of the Church Militant. (He is not destined for the Church Triumphant until or unless he repents.)

Anthropos, according to Plato, is he who looks up in wonder at the goodness, truth and beauty of Creation, seeing the Creator’s presence in His creatures. Such people are the poets who see the beauty and, if they have been given the gifts, show the beauty to others in sub-creative ways (music, literature, art, architecture). 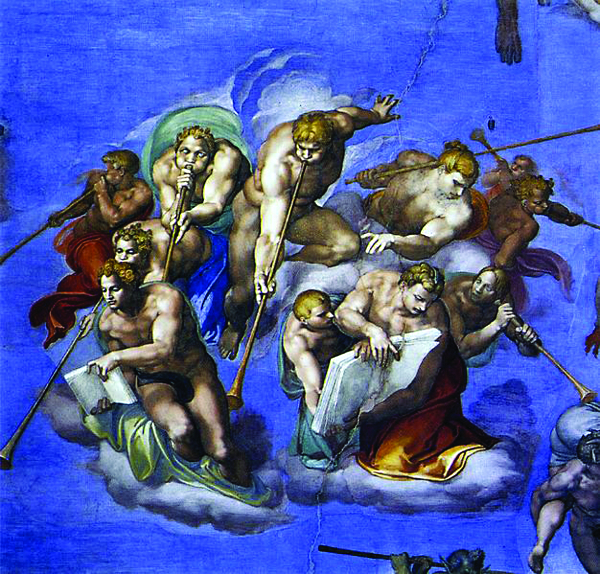 Close-up of the angels in the Last Judgment of Michelangelo in the Vatican’s Sistine Chapel. The angels call souls to judgment. The larger of the two books they hold contains the names of those whose unrepented sins lead to their damnation

This “three-dimensional” understanding of history animated Pope Benedict’s insistence that the only argument for the Church is the saints she has nurtured and the great works of art that she has inspired: “Next to the saints, the art which the Church has produced is the only real ‘apologia’ for her history. It is this glory which witnesses to the Lord, not theology’s clever explanations for all the terrible things which, lamentably, fill the pages of her history. The Church is to transform, improve, ‘humanize’ the world — but how can she do that if at the same time she turns her back on beauty, which is so closely allied to love? For together, beauty and love form the true consolation in this world, bringing it as near as possible to the world of the resurrection. The Church must maintain high standards; she must be a place where beauty can be at home; she must lead the struggle for that ‘spiritualization’ without which the world becomes the ‘first circle of hell.’”

It is, therefore, the twin threads of beauty and love which witness to God’s presence, in contrast to that third dark and twisted thread of pride. All three threads are interwoven in the history of man because they are all interwoven in the heart of man.

As for each of us, as individuals, answering the call of homo-viator, we are soldiers of Christ in the Church Militant (the Church at War) who must pray for the grace to defeat our own dragons, our own interior homo superbus, and also for the grace to keep looking up in wonder at the heavens, seeing Heaven itself reflected in its beauty. If we do this, we will become lights in the darkness.

The end of the world for each of us is when we die. The only purpose of life is to get to heaven. It is not easy. It is a war. Heaven is the victory. The Church Triumphant is the victor. The war is already won. We, as combatants, will either rise with Christ in His victory, or fall from His presence by choosing to fight for the Enemy. “The issue is quite clear,” G. K. Chesterton said on his deathbed. “It is between light and darkness and every one must choose his side.”