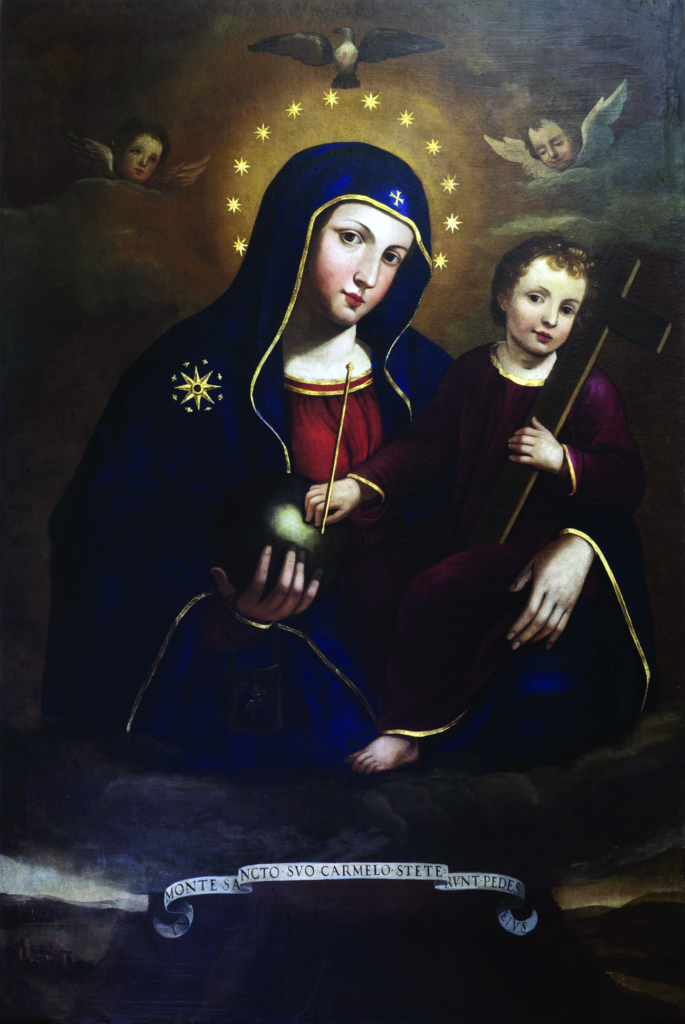 Plautilla’s Madonna and Child that caused her to take a vow of chastity. 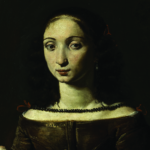 Melania G. Mazzucco, born in Rome on October 6, 1966, is one of Italy’s most distinguished authors. She writes fiction, scholarly tomes, art historical essays, and historical novels. Her first international success was Vita (2003) about a brother, Diamante (based on Mazzucco’s paternal grandfather), and his sister Vita, who, at only ages 12 and 9, in 1930 immigrated alone to New York. That same year, 2003, Vita won the prestigious Strega literary prize and was translated into English but still with the same Italian title. Mazzucco’s scholarly art history tomes are also multi-prize-winning: Jacomo Tintoretto & I suoi figli. Storia di una famiglia veneziana (2009) about the painter Tintoretto and his family, and Il Museo del Mondo (2014), the stories of 52 masterpiece paintings (for a complete list of the painters and the titles of their works, click on www.abellarte.com) and then on il museo del mondo. Mazzucco’s two art historical novels are biographies of the 16th and 17th century female artists: La lunga attesa dell’angelo (2008) about Marietta Robusti, Tintoretto’s daughter, and Architettrice (2019) about Plautilla Bricci, a painter as well as Italy’s first woman architect (1616-1705). An immediate bestseller and also winner of Mazzucco’s second Strega Prize, Architettrice was certainly the inspiration for the first monographic exhibition ever about Plautilla: A Silent Revolution. Plautilla Bricci, Painter and “Architectress,” on until April 19 in Trastevere’s newly-restored Renaissance Palazzo Corsini. Mazzucco wrote the essay Una certa donna che vive ancora for its splendid catalog (34.50 euros).

The some 40 works-of-art on display, with the exception of an “idealized” possible portrait of Plautilla on loan from a private collection in Los Angeles, all come from museums, private collections, libraries, and archives in Italy, the majority being in Rome: the Galleria Corsini, Galleria Spada, Palazzo Barberini, Biblioteca Nazionale, Archivio di Stato, The Vatican Library and Museums, Gabinetto delle Stampe, Istituto Centrale per la Grafica, and the Collezione Fagiolo dell’Arco.

The exhibition is divided into nine sections: The Baroque en Rose about Plautilla’s early training from her father Giovanni (1579-1645), a versatile artist himself: painter, musician, amateur composer, engraver, poet, and comedian; Bricci’s partnership with Abbot Elpidio Benedetti (1610-1690), the factotum and confidante of Cardinal Giulio Mazarin and an agent of the King of France, who became Plautilla’s strongest supporter and then colleague; Defying Death: Bricci’s relationship with Cardinal Mazarin (1602-1661) who commissioned foremostly Benedetti but also Plautilla to design his tomb; Very Beautiful Banner about her masterpiece for the Compagnia della Misericordia in Poggio Mirteto, a village not far from Rome, where Elpidio had been born; Trinità dei Monti and celebrations about her and Benedetti’s architectural plans, never executed, for central Rome; Plautilla’s Freedom: The Miraculous Icon of Santa Maria in Montesanto; Plautilla, the Painter; The Altarpiece of St. Louis in Rome’s Church of San Luigi dei Francesi; and Plautilla the Architect: Villa del Vascello. 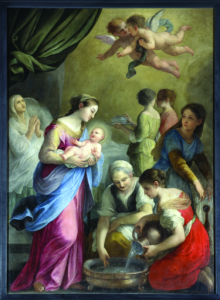 Martyrdom of St. John the Baptist

Of particular interest in The Baroque en Rose are the portrait by an unknown artist, possibly of Plautilla, on loan from a private collection in Los Angeles, and Allegoria dell’architettura, again by an unknown artist but used by Mazzucco as the cover of her book. On display in Bricci’s Partnership with Elpidio Benedetti are magnificent embroideries stitched by Elpidio’s father, Andrea, who was also an art dealer. They include a lavish chasuble and corporal burse from the liturgical vestments donated to the Bologna Cathedral by Pope Gregory XV. For Plautilla began her artistic career as an embroiderer in Andreas’s Roman workshop. Elpidio also learned his trade as an art dealer and intermediary from his father.

After Cardinal Mazarin left Rome in 1639 never to return, Elpidio nevertheless provided him with special Italian wines, clothing, fine horses, furniture, and art. Probably Elpidio was the negotiator of the Cardinal’s portrait by Pietro da Cortona, painted remotely in December 1641 at the behest of Pope Urban VIII. Loaned by a private collection in Rome, it’s on display in Defying Death: Bricci’s Relationship with Cardinal Mazarin for the first time ever. From then on, for the next 20 years Plautilla continued to collaborate with Cortona and with Elpidio. On display here are also some preparatory drawings by Elpidio and Plautilla for Mazarin’s tomb in Paris.

In the next section, The Very Beautiful Banner, again thanks to the mediation of Elpidio, is Plautilla’s masterpiece. It is the only canvas, painted on both sides by her, for which we have a definite date (the 1675 Jubilee). It illustrates the birth and martyrdom of the Compagnia della Miseracordia’s protector saint: St. John the Baptist.

By now Plautilla’s and Elpidio’s partnership was solidified and they worked together on plans to transform the monumental stairway on the slopes of the Pincio Hill and more, but for political reasons none of their projects, shown in Trinità dei Monti: Plans and Celebrations, were ever executed. According to the press kit, the reason was that Pope “Alexander VII [Don’t miss Bernini’s terracotta bust] could not bear the idea of there being a large–scale architectural project in the center of Rome that fatally resembled a celebration of Louis XIV.” 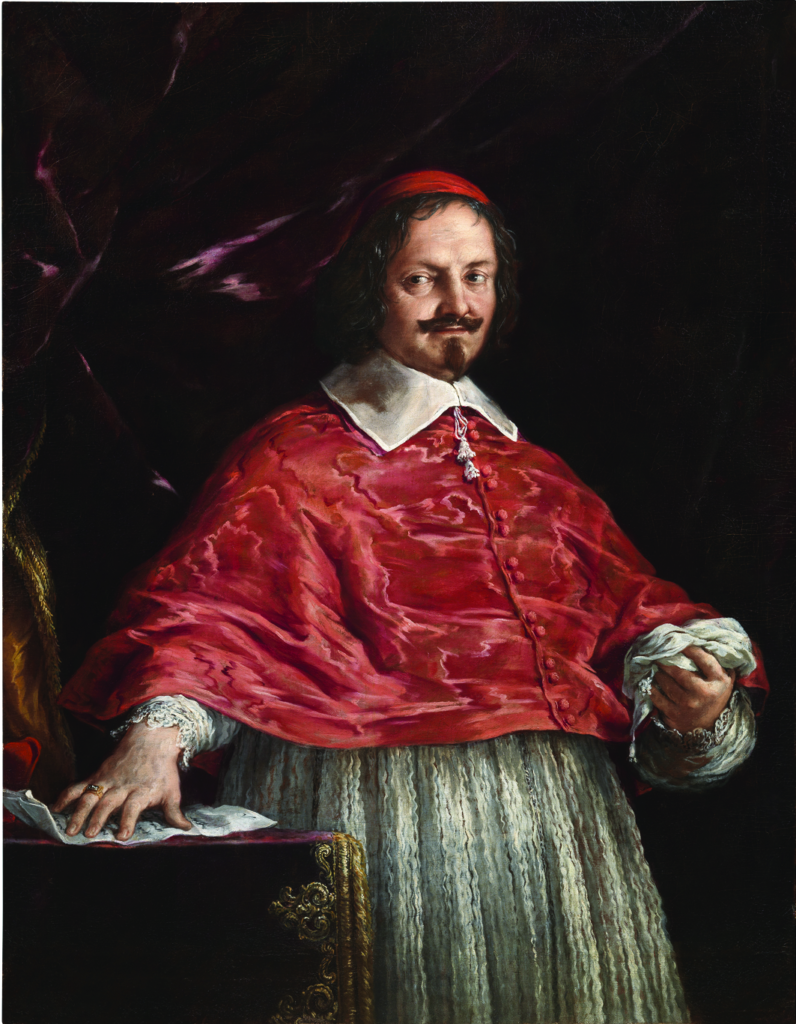 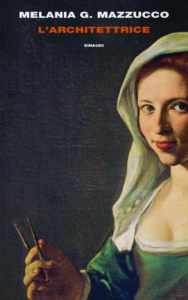 The cover of Mazzucco’s book

The next section, Plautilla’s Freedom: The Miraculous Icon of Santa Maria in Montesanto is a flashback to 1640 and can be considered an introductory section to the next section, Plautilla as a Painter. On display here is one of her earliest paintings (1640), The Icon of Santa Maria in Montesanto, which brought her to public attention, but which also changed her life. For, as the press kit tells us: “Meant to be displayed in a small chapel that no longer exists, this Carmelite icon bears young Plautilla’s signature on the back, along with the enlightening handwritten note also stuck onto the back to convey the memory of this prodigy: ‘This image was painted in 1640 by Plautilla Bricci, a spinster, who, as she herself often told our fathers, having erroneously shaded some parts of the Madonna’s face because she had never painted it on a large scale, found it miraculously perfected.’” Thus Plautilla took a vow of chastity, perhaps to avoid an arranged marriage or more likely to have the freedom to paint.

Plautilla’s life-changing canvas is on display in Plautilla: The Painter. Again the press kit tells us that Plautilla “was publicly consecrated as a painter in the 1660s, when by then in her fifties, she received two important commissions for the complex of San Giovanni in Laterano: a large tempera lunette, The Presentation of the Sacred Heart of Jesus to the Eternal Father (1669-74)” on loan from the Vatican Museums and displayed here for the first time, and the lost canvasses with Saint Francis and St. Dominic for a series of grisaille in the complex’s Oratorio del Santissimo Sacramento. Also on display here is the altarpiece depicting St. Louis, in Rome’s French Church of San Luigi dei Francesi (16761680) at the center of the chapel that she’d designed for Elpidio.

Also on display here and again thanks to Elpidio’s support, is Plautilla’s Madonna of the Rosary on loan from the Cathedral in Poggio Mirteto. It is her last currently known painting (1683-1687).

Plautilla, the Architect: Villa del Vascello is the exhibition’s last section. We know that again thanks to Elpidio, Plautilla established herself as an architect, a field reserved up to then only for men, and was known as “Architettrice” (like the title of Mazzucco’s volume). She worked on Villa Benedetti aka Villa Vascello, or the “Ship” Villa, outside Porta San Pancrazio, at the top of the Janiculum Hill beginning in 1662-1663. 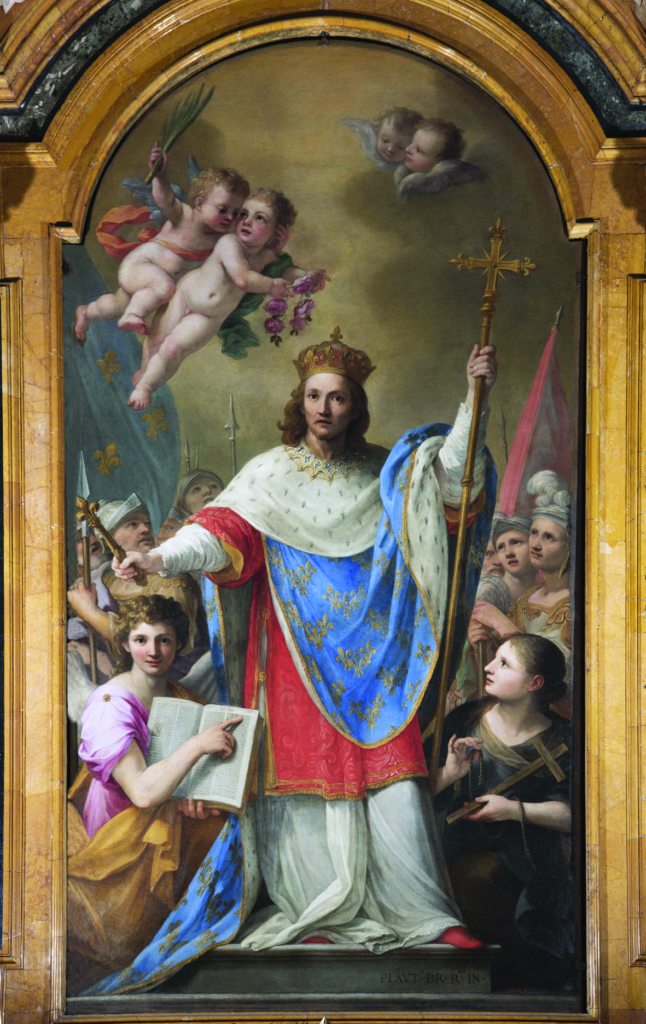 This bizarre edifice, which resembled a ship on the top of a cliff, was Plautilla’s most notable achievement. Sadly, it was almost completely destroyed in 1849 by the canon fire of the French army defending Pope Pius IX against Garibaldi’s freedom fighters seeking to unify Italy, this campaign was not successful. On display here are a few of Plautilla’s surviving preparatory drawings and works by later artists showing what was to have been her masterpiece but in ruins.

The exhibition owes part of its title, “A Silent Revolution” to the meeting of Plautilla’s rare artistic talent with her enlightened sponsor, Elpidio Benedetti, who was willing to offer constant encouragement and protection to the woman, who, at least from 1655 on, had become his “resident artist.” 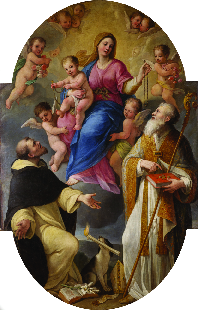 The Madonna of the Rosary with Sts. Dominic and Liborio, Plautilla’s last painting

In 1677 Plautilla and her brother Basilio, also a painter and architect, who’d worked with Plautilla on the Villa Vascello, moved to Borgo Nuovo di San Francesco a Ripa in Trastevere to a house which belonged to Elpidio. To make sure she’d be cared for should he predecease her, in his will Elipidio had left the dwelling to Plautilla for her lifetime.