Though major deficits projected, Vatican says Holy See not at risk of default

The new head of the Holy See’s financial office said the Vatican is not at risk of fiscal default, even while reports in the Italian media indicate dire deficit projections for the Holy See.

Speaking to Vatican Media May 13, Jesuit Fr. Juan Antonio Guerrero Alves said the Holy See is sure to see its deficit grow due to the coronavirus pandemic, but is not in danger of default.

“That doesn’t mean that we are not naming the crisis for what it is. We’re certainly facing difficult years,” the priest said.

In fact, the Vatican had been facing difficult financial prospects before the coronavirus pandemic. In 2018, the Holy See had a budget deficit of 70 million euros in its 300 million euro budget.

The Holy See is concerned about an Israeli plan to unilaterally annex a large portion of land in the West Bank, said a May 20 Vatican statement.

Erekat, it said, wanted “to inform the Holy See about recent developments in the Palestinian territories and of the possibility of Israeli applying its sovereignty unilaterally to part of those territories, further jeopardizing the peace process.”

Israeli Prime Minister Benjamin Netanyahu had promised to bring a proposal to the full government to annex the land on which some 130 Jewish settlements are built in the West Bank, settlements the U.N. Security Council has declared a “flagrant violation” of international law.

The Vatican statement said, “The Holy See reiterates that respect for international law and the relevant United Nations resolutions is an indispensable element for the two peoples to live side by side in two states, within the borders internationally recognized before 1967.”

“Today is a way that we can in some way share [beauty] with the entire world … thanks to Raphael,” Vatican Museums Director Barbara Jatta told CNA June 1.

After being closed for three months due to Italy’s coronavirus outbreak, the Vatican Museums opened their doors June 1 allowing only 1,600 visitors — under 10% of its usual tourist traffic — to enter the museums, with additional safety measures.

These visitors to the museums were some of the first to see the restoration of two paintings that art historians believe to be the last works of Raphael, the Renaissance painter responsible for The School of Athens and The Transfiguration.

Pope Francis donates an ambulance to aid the homeless

Pope Francis has donated an ambulance that will be set apart to serve Rome’s poor and homeless population in need of emergency medical care.

“It is a new gift from the Holy Father, entrusted to the Office of Papal Charities, in favor of the poorest, in particular of the homeless who face the difficulties of the streets,” a Vatican communiqué stated June 1.

The Pope blessed the ambulance before Mass on Pentecost Sunday. The Vatican City ambulance will be used in coordination with the Vatican’s medical aid initiatives for service to the poor who arrive sick at the Vatican’s homeless shelter and medical clinic. 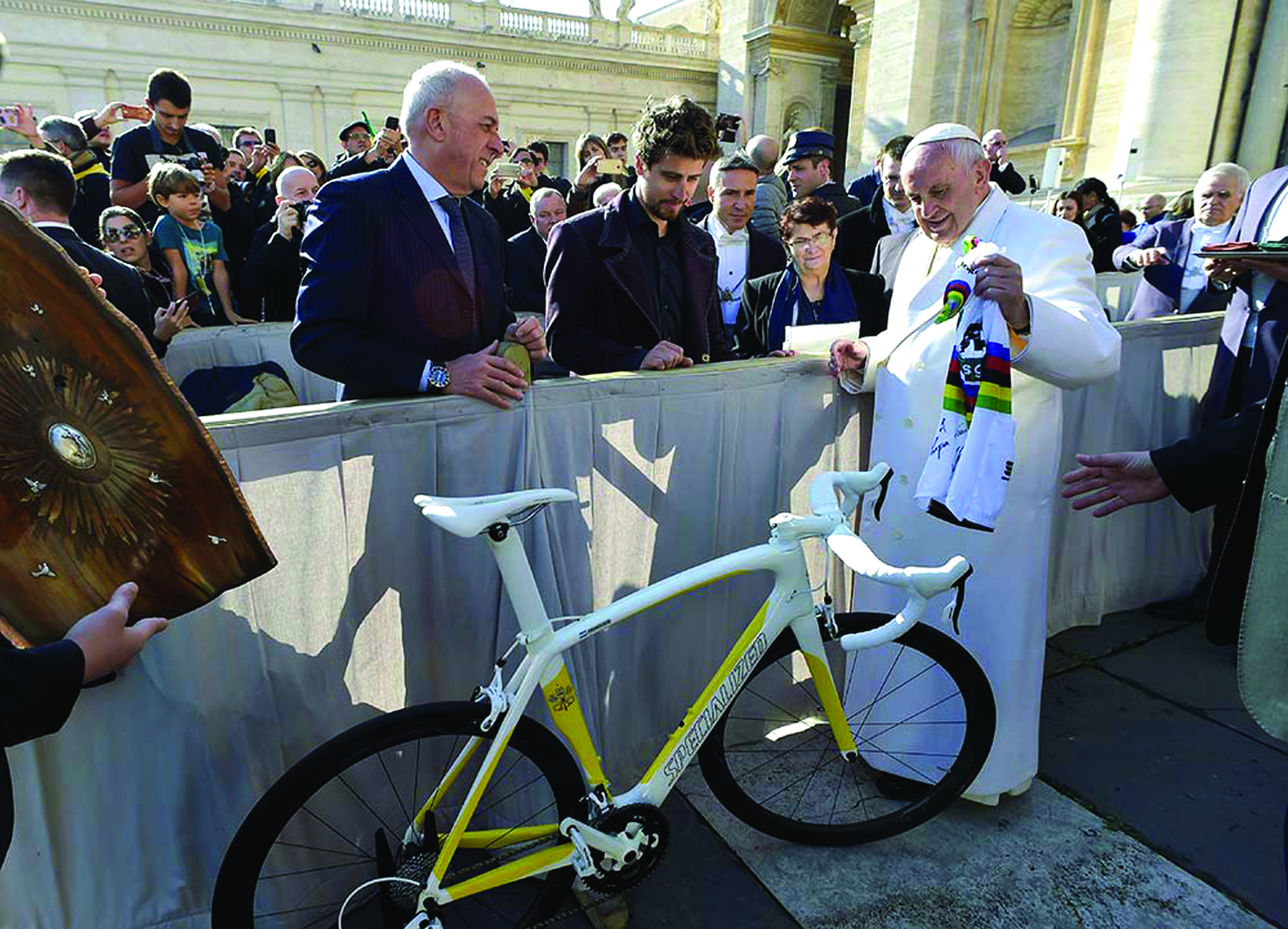 Pope Francis teamed up with Olympic athletes for a charity auction in June to support hospitals in the regions of Italy hardest hit by the coronavirus.

Other athletes, such as Italian runner and record holder Filippo Tortu, are offering the opportunity for a day of training, followed by dinner. The Olympic rowing duo Giuseppe and Carmine Abbagnale are auctioning off a dinner for two together with them near Sorrento. 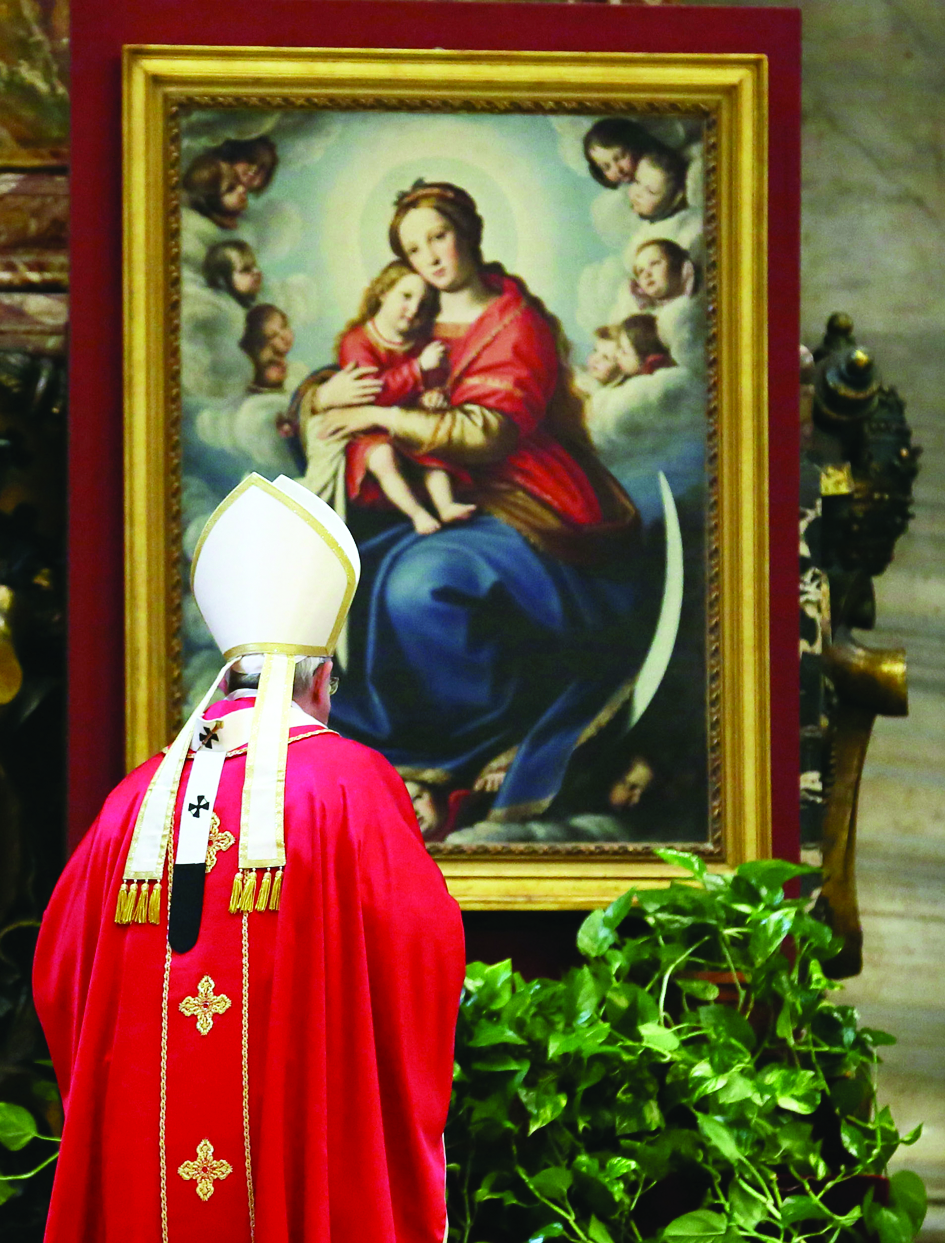 In the circle below, Cardinal Robert Sarah, prefect of the Congregation for the Divine Liturgy and the Discipline of the Sacraments

Pope Francis has approved the inclusion of three additional invocations in the Litany of the Blessed Virgin Mary, also called the Litany of Loreto.

In a June 20 letter to the presidents of bishops’ conferences, Cardinal Robert Sarah, prefect of the Congregation for the Divine Liturgy and the Discipline of the Sacraments, said the invocations “Mater misericordiae,” “Mater spei,” and “Solacium migrantium” should be inserted in the Marian litany. The Latin titles in English are “Mother of Mercy,” “Mother of Hope,” and “Comfort of Migrants,” respectively.

“The titles and invocations which Christian piety has reserved for the Virgin Mary over the course of the centuries, as the privileged and sure way to an encounter with Christ, are innumerable,” Sarah wrote.

“Even in this present moment which is marked by feelings of uncertainty and trepidation, devout recourse to her, which is full of affection and trust, is deeply felt by the People of God,” the cardinal continued.

The Vatican announced that Pope Francis has donated 35 ventilators to overwhelmed hospitals in developing countries as the number of coronavirus cases worldwide nears 10 million.

The Pope donated four ventilators each to Haiti, Venezuela, and Brazil, a country which has suffered more than 50,000 deaths from COVID-19.

Pope Francis extended a special greeting to Patriarch Bartholomew, the Ecumenical Patriarch of Constantinople and head of the Orthodox Churches, on the feast of Saints Peter and Paul. Speaking to the crowd in St. Peter’s Square, Pope Francis noted that it is tradition for a delegation from the Patriarchate of Constantinople to visit Rome on the feast of Sts. Peter and Paul, but that the visit could not happen this year due to the ongoing COVID-19 pandemic.

“I spiritually embrace my dear brother, the Patriarch Bartholomew, in the hope that our reciprocal visits may resume as soon as possible,” said Pope Francis.

Pope Francis also mentioned his sadness that the annual visit with the delegation from the Ecumenical Patriarch could not take place. He said that he felt a connection “in his heart” to Patriarch Bartholomew when the latter visited the tomb of St. Peter.

“[The Orthodox Christian delegation] are here with us,” he said, even though they were not able to be present in person in Rome.

The Vatican announced July 11 that Pope Francis has recognized the heroic virtues of a 14-year-old Italian boy who died in 1963.

The Pope advanced the cause of Angiolino Bonetta, born on Sept. 18, 1948, in Cigole, northern Italy. A lively but virtuous boy, he excelled at school as well as at sports.

He was diagnosed with bone cancer at the age of 12; he underwent chemotherapy and his leg was amputated.

According to an account of his life in “Saints for the Sick,” a 2010 book by Joan Carroll Cruz, Bonetta remained cheerful and his acceptance of his illness inspired conversions. When a nun suggested that he should offer up his sufferings, he replied: “I have already offered all to Jesus for the conversion of sinners. I am not afraid; Jesus always comes to help me.”

To a woman who expressed sympathy on seeing him walking painfully on crutches, he said: “But don’t you know that at every step I could save a soul?”

Pope Francis made a surprise visit to a childrens’ summer camp at the Vatican, walking there alone from his residence, the Domus Sanctae Marthae. “The kids were so stunned they stayed completely silent,” Salesian Father Franco Fontana, a chaplain at the Vatican overseeing the program said. The Pope greeted the children, who were finishing their breakfast, and asked them how they spent their day and if they were happy. Fontana said he was struck by the way the children interacted with the Pope, sensing his “simplicity and paternal nature.”