I received today a little note written in connection with the death on April 9 at the age of 100 of Prince Philip, husband of Queen Elizabeth II of Great Britain.

The note contains a recollection written by Metropolitan Hilarion Alfeyev, the head of the External Relations Department of the Russian Orthodox Church centered in Moscow, Russia.

I have known and collaborated on various cultural projects with Hilarion since 1999, when we first met on a cold December day in Moscow in connection with the re-consecration of the main Catholic church there, which had been closed by the Soviets in the 1920s.

(Note: If you would like to support such Catholic-Orthodox, American-Russian collaboration, which aims at improving our relations by “building bridges” of mutual understanding between the Catholic and Orthodox churches, click here.)

(Related note: Our InsidetheVatican website was “hacked” over this past weekend by unknown persons. Many of my “Moynihan Letters” were “taken down” (the links were broken). Among the files no longer accessible are many of the writings of Archbishop Viganò posted over the past two years. We actually are uncertain about what to do, as we at the magazine are writers, and not competent as computer programmers. We are concerned our website may be “under attack” and so might eventually even be “taken down.” If some reader of this letter would like to offer counsel or help in this regard, please write back to me by return email, with my thanks in advance. The email continues to work for the moment. —RM)

Hilarion is essentially the “foreign minister” of the Russian Orthodox Church, and in this capacity he is required to visit many countries, and meet with many leading political and cultural figures… among them, the late Prince Philip.

Hilarion’s recollection does not extend to a complete evaluation of the life and work of Prince Philip.

It focuses on only one meeting, and recounts words exchanged privately.

For this reason, I thought it worth bringing to your attention. —RM

The photo below shows Hilarion with Prince Philip. Hilarion is giving the prince a gift: an icon of a Holy Martyr of the Russian Orthodox Church, the Grand Duchess Elisaveta Feodorovna, who was the grand-daughter of Queen Victoria and who spoke perfect English. The German-born princess became a nun after her Russian husband was assassinated in 1905 and devoted her life to the poor of Moscow, especially children. St. Elizabeth was executed by the Bolsheviks in 1918 on the day after the July 17, 1918 execution of the Russian royal family (the Tsarina, Alexandra, was St. Elizabeth’s sister) in Ekaterinburg, on the eastern slopes of the Ural mountains. Through St. Elizabeth’s connection with Queen Viktoria, her grandmother, she was the great-aunt of Prince Philip… 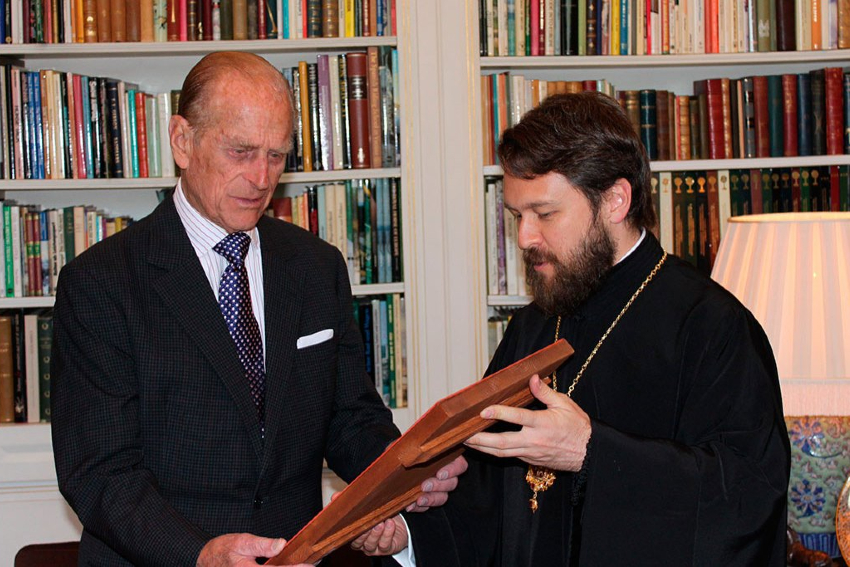 Here is the report of Hilarion’s reflection on the death of Prince Philip:

Metropolitan Hilarion: Philip, Duke of Edinburgh, has kept his love for Orthodoxy for the rest of his life (link)

On April 9, 2021, the husband of Queen Elizabeth II of Great Britain, Prince Philip, Duke of Edinburgh, died at the age of 100. In a comment to RIA Novosti, Metropolitan Hilarion of Volokolamsk, Chairman of the Moscow Patriarchate’s Department for External Church Relations, spoke about the deceased’s attitude to the Orthodox faith and shared his memories of meeting with Duke Philip.

Philip, the Duke of Edinburgh, the son of Prince Andrew of Greece and Denmark, who died today, was baptized in the Orthodox faith.

After the forced departure of his parents from Greece, he ended up in the UK, where he took the British surname Mountbatten and converted to Anglicanism.

However, he retained his love for Orthodoxy for the rest of his life.

When I met him at his Buckingham Palace apartment on May 25, 2011, he told me literally the following: “I became an Anglican, but I remained Orthodox.”

In total, we talked for about an hour.

He was keenly interested in the revival of the Church in Russia and other countries of the canonical presence of the Russian Orthodox Church, and asked about the life of Orthodox monasteries, parishes, and religious educational institutions.

With great warmth, he recalled his visits to the Holy Mount Athos.

He told me about his Orthodox roots and about his family ties with the Russian royal house.

In memory of the meeting, I gave him an icon of the Holy Martyr Grand Duchess Elisaveta Feodorovna, whose great-nephew he was.

I sincerely express my condolences to Her Majesty Queen Elizabeth on the loss of a loved one with whom she has lived together for almost three quarters of a century.

Eternal memory to him.

“From there Jesus arose and went away to the region of Tyre and Sidon. And he entered a house and did not want anyone to know, yet he could not be hidden.” —Gospel of Mark 7:24

The people of Beirut and all of Lebanon are in need of our assistance.

We have spoken with our friends, the Lebanese Maronite Monks, about how we can help. They have suggested that a group of young Lebanese Maronites, led by Georges Assaf, can receive funds and visit people on the ground in Beirut whose homes have been turned to rubble, and so provide real, urgently needed help at the “grass roots.”

We contacted Georges (brother of our long-time friend Tony Assaf, a Lebanese-born writer who has collaborated with Inside the Vatican for almost 20 years and who has helped us on many of our pilgrimages to Rome, as our pilgrims will remember). Georges agreed to head up the effort. Georges and his associates, including Aya Niameh, a young Lebanese woman, are real people whom we have come to know personally. They are doing much-needed work on the ground in Beirut.

You can make a tax-deductible donation here.

These donations are restricted to our “Friends of Lebanon“ project.

These funds are used to carry out two goals:

1) Short Term Help: to assist those who need immediate assistance — daily needs like food and water, electricity and other essential household items.

2) Long Term Hope: to support those most in need to become stable, to become self-reliant, to receive education, and to stay in Lebanon. Many Lebanese young people are thinking they may need to leave the country to find a better life… Your help can give them hope…

As a donor, you will have an opportunity to join the conversation on a monthly virtual video call with those who are on the ground in Lebanon, helping those in need.

Note: Jesus did travel to Tyre and Sidon, as the Gospel of Mark relates. His feet walked on the soil of Lebanon. In this sense, the land of Lebanon was blessed and sanctified by the presence of Jesus. Helping the Christians of Lebanon is helping a community of Christians which dates back to the very earliest days of the Church. Please give generously, the need is great.