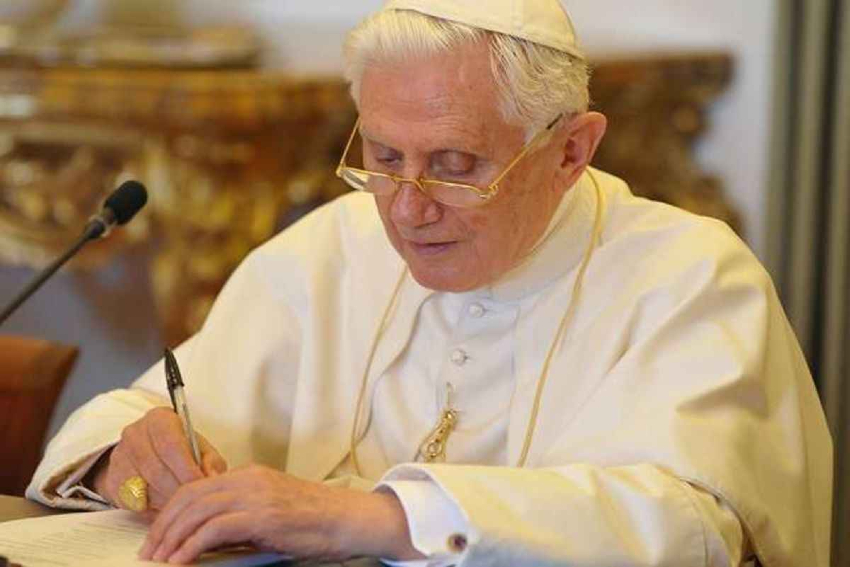 Pope Emeritus Benedict XVI, now 94, pictured in 2010 at age 83 (Vatican Media). On October 11, Benedict wrote a letter remembering an old friend, Greek Orthodox Metropolitan Damaskinos Papandreou, who died 10 years ago (the occasion for this letter was the 10th anniversary of his death). Benedict came to know the Metropolitan in 1959, when Damaskinos was just 23 and Benedict only 32 and a new professor at the University of Bonn, Germany. Their friendship lasted for more than half a century.

Below, two screenshots of the text of the letter in German, showing the beginning and the end of the letter, with the actual signature of the Emeritus Pope. 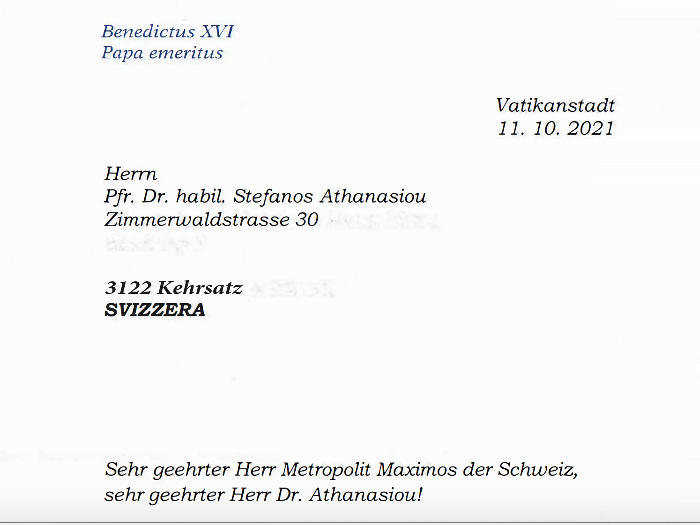 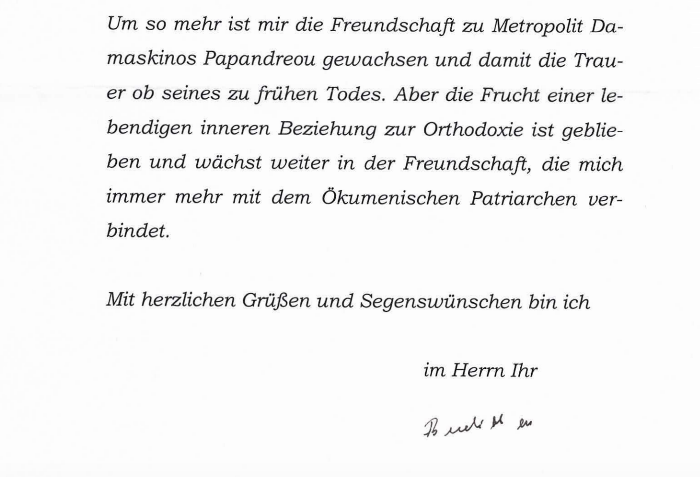 “The friendship with Metropolitan Damaskinos Papandreou grew all the more for me, and thus the sadness over his all-too-early death [10 years ago]. But the fruit of a lively inner relationship with Orthodoxy has remained and continues to grow in the friendship that unites me more and more with the Ecumenical Patriarch.” —Pope Emeritus Benedict XVI, 94 (he will turn 95 in April), in a note written on October 11,  five weeks ago, which was read on November 5, 14 days ago, to a conference in Switzerland, in which he recalls his friendship with Metropolitan Damaskinos Papandreou, who died 10 years ago

A letter written by Emeritus Pope Benedict is not any longer common, since the Emeritus Pope is now 94 years old, but he wrote a letter dated October 11 which shows well the clarity of his mind and memory.

Also worth noting is the closeness of the friendship Benedict feels with the present Greek Orthodox Ecumenical Patriarch, Bartholomew.

Here is a November 8 Catholic News Agency report on the brief letter:

Pope emeritus Benedict XVI has paid tribute to an Orthodox leader on the 10th anniversary of his death.

In a letter dated Oct. 11, the retired German pope said it seemed “inconceivable” that a decade had passed since the death of Metropolitan Damaskinos Papandreou, the first Greek Orthodox metropolitan of Switzerland, in 2011.

CNA Deutsch, CNA’s German-language news partner, reported that Benedict XVI made the comment in a message to a conference held in the metropolitan’s honor on Nov. 5 at the University of Fribourg, Switzerland.

Metropolitan Damaskinos, a bishop of the Ecumenical Patriarchate of Constantinople, was born in Thermo, Greece, on Feb. 23, 1936. He was elected as the first metropolitan of Switzerland in 1982.

The author of numerous works on ecumenism, he served as the metropolitan bishop of Adrianople from 2003 until his death on Nov. 5, 2011, at the age of 75.

“That 10 years have already passed since the death of Metropolitan Damaskinos Papandreou of Switzerland is quite inconceivable to me,” the pope emeritus wrote in his message, addressed to Metropolitan Maximos of Switzerland and Professor Stefanos Athanasiou.

The letter was read out in a video message to the conference by Cardinal Kurt Koch, the Swiss president of the Pontifical Council for Promoting Christian Unity.

Benedict, who served as Pope from 2005 to 2013, said it was “a very special gift of Providence” that shortly after he was appointed a professor at the University of Bonn, Germany, in 1959, two Orthodox archimandrites began studying at the university’s Catholic and Protestant theological faculties.

“This was something new and unexpected, because until then Orthodox students never studied at Catholic faculties, but exclusively at the Protestant and the so-called Christian Catholic (= Old Catholic) faculty in Bern [Switzerland],” he explained.

“Both archimandrites became friends of mine. Unfortunately, my friend Stylianos Harkianakis, who later became Metropolitan of Australia, subsequently took a rigorous position that cooled our friendship,” the 94-year-old wrote.

“The friendship with Metropolitan Damaskinos Papandreou grew all the more for me, and thus the sadness over his all-too-early death.”

“But the fruit of a lively inner relationship with Orthodoxy has remained and continues to grow in the friendship that unites me more and more with the Ecumenical Patriarch,” Benedict concluded.

[End, CNA report on this letter] 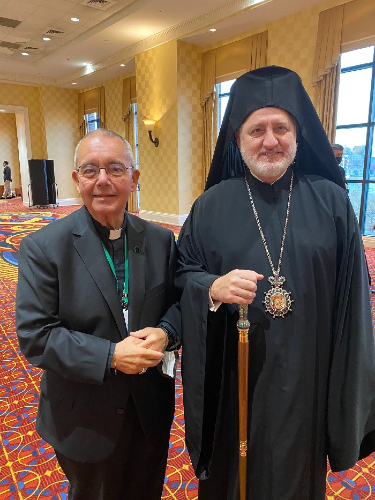 American Bishop David Talley, chairman of the US Bishops’ Committee on Ecumenical and Interreligious Affairs, with His Eminence, Archbishop Elpidophoros yesterday morning, November 17, for a breakfast workshop on Christian unity during the annual meeting of the US bishops in Baltimore, Maryland (link)

Here is a Catholic News Agency report by Christine Rousselle on a meeting two days ago, November 16, between an Orthodox bishop and the American bishops meeting in Baltimore, Maryland.

It was the first time in history that an Orthodox leader had been present at an assembly of the US bishops:

Elpidophoros said he had “heartfelt joy” being with his “brother bishops of the USCCB,” and that Tuesday, Nov. 16, marked the first time in the history of the United States that Orthodox leadership had been present at the USCCB’s general assembly. He was joined by several other Orthodox bishops who were present as observers.

Archbishop Jose Gomez, the president of the USCCB, and Bishop David Talley, chairman of the committee on ecumenical and interreligious affairs, arranged for the Orthodox delegation to join the assembly. Gomez invited Elpidophoros to address the assembly.

“As you are well aware, a few weeks ago we had the honor and blessing to welcome His All-Holiness Ecumenical Patriarch Bartholomew for a historic visit to this country during which he met some of you either in Washington, DC, or in New York City,” said Elphidoros. He thanked the bishops for their “warm and ecumenical presence” with the patriarch.

Elphidoros quoted Patriarch Bartholomew’s address to the Ecumenical Reception at the National Council of Churches, where the patriarch stated that a “dialogue of love” between the faiths was the future for the two Churches, and that the 21st century “should become the century of the restoration of unity.”

“Today, I am convinced, as I present myself in front of my brother hierarchs, that this dialogue of love, initiated by Pope Paul VI and Ecumenical Patriarch Athenagoras in 1964 in Jerusalem, continues with a particular density in this blessed country,” said Elphidoros.

This “dialogue of love” should be modeled by the relationship of Pope Francis and Patriarch Bartholomew, explained the archbishop. In 2013, Bartholomew became the first Archbishop of Constantinople to attend a papal enthronement, and the two have worked together, along with other faith leaders, to discuss the best approaches on societal issues.

This dialogue between Catholicism and Orthodoxy “is a clear manifestation of our common desire for unity and communion on both a global and local level,” said Elphidoros, and he said that the North American Orthodox-Catholic Theological Consultation “should not be shy” about what it has accomplished in its existence.

“Since 1965 — at the happy coincidence of the reestablishment of Catholic-Orthodox relations and the Second Vatican Council — this Consultation has produced thirty-two documents, reports, and statements,” he said. “Some of them became real references for theologians, and for our Churches to walk together towards unity.”

These writings, he said, are the “real fruits” of the collaboration between Orthodoxy and Catholicism, fruits that serve to “nourish both our communities.”

In addition to the publications, Elphidoros said that the improving relationships between the two faiths produce spiritual fruits as well.

Looking ahead, Elphidoros said that the Orthodox Christians are “very interested” in the synodal process, particularly the October 2023 Catholic Synod of Bishops, and would be interested in providing input as the preparations for the synod begin.

“I am convinced that the future and mission of Catholic-Orthodox relations in the USA is to continue to bear witness to God’s presence in the world, faithful to the Spirit of Jerusalem that we received as a legacy,” he said.

“Ecumenical dialogue bears in itself a synodal dimension that explores the meaning and praxis of the very nature of the Church structure and mission,” said Elphidoros, adding that while international dialogue is studying the interdependence between synodality and primacy, “perhaps, in our American context, as we dedicate our energy and time to sharing this important issue and reflecting together, it will bear fruit in due course.”

Elphidoros closed his speech by thanking the bishops, saying he hopes that “there will be many more opportunities to come together as brothers.”

He then gave Archbishop Gomez a silver pectoral cross from the Hagia Sophia, “the universal cathedral of Christianity,” as a symbol of his “love and appreciation.”

—Christine Rousselle is a DC Correspondent for Catholic News Agency. Prior to working at CNA, she was the managing web editor of Townhall.com; she has a BA in political science from Providence College.

And here below is another CNA report, also by Rousselle, on the issue of the Eucharist, and the reception of communion, which was discussed by the bishops at their meeting.

The bishops approved a document that does not make explicit mention of denying the sacrament to certain high-profile Catholics.

Here is her report:

The United States Conference of Catholic Bishops voted overwhelmingly to accept the document “The Mystery of the Eucharist in the Life of the Church” during the morning session of the fall USCCB meeting on Nov. 17, 2021.

The vote, which is held in a secret electronic ballot, was 222 in favor to eight against, with three abstentions.

To pass, two-thirds of the bishops had to vote in favor of the document.

Initially, it was speculated that the document would provide explicit directives on who and who is not eligible to receive the Eucharist.

Particularly, it was feared that the bishops would use the document to rebuke Catholic politicians who are in favor of abortion rights.

President Joe Biden (D), the second Catholic president of the United States, has publicly supported a right to legal abortion throughout the entirety of a pregnancy. During his presidential campaign, he broke from several decades of his past beliefs and announced that he was now opposed to the Hyde Amendment.

The final draft of the document does not make explicit mention of denying the sacrament from certain high-profile Catholics, and instead focuses on the importance of teaching the Real Presence of the Eucharist and the Eucharist as a tool for evangelization.

[End, CNA report on the bishops’ document on the Eucharist]