“In order to be convinced that we in no way live in a post-Christian age, it is sufficient to visit one of the Orthodox countries, in which a large-scale revival of religious life continues that began more than a quarter of a century ago.” —Russian Orthodox Metropolitan Hilarion Alfeyev, homily, St. Vladimir’s Seminary just outside of New York City, November 13, 2021

“For nearly two thousand years already now the call has resounded on earth: ‘I am the door. If anyone enters by Me, he will be saved.’” —Ibid.

Below is the text of a homily delivered in St. Vladimir’s Seminary just outside of New York City by Metropolitan Hilarion Alfeyev five days ago, on November 13, 2021.

In his remarks, Hilarion sets Christ at the center of all human history, and does so having himself experienced how, during his boyhood in the Soviet Union, Christ was officially removed from the center of the life of the Russian people and relegated to the margins of society.

In the photo below, Hilarion (in the center) at the November 13 Divine Liturgy at St. Vladimir’s Seminary near New York City 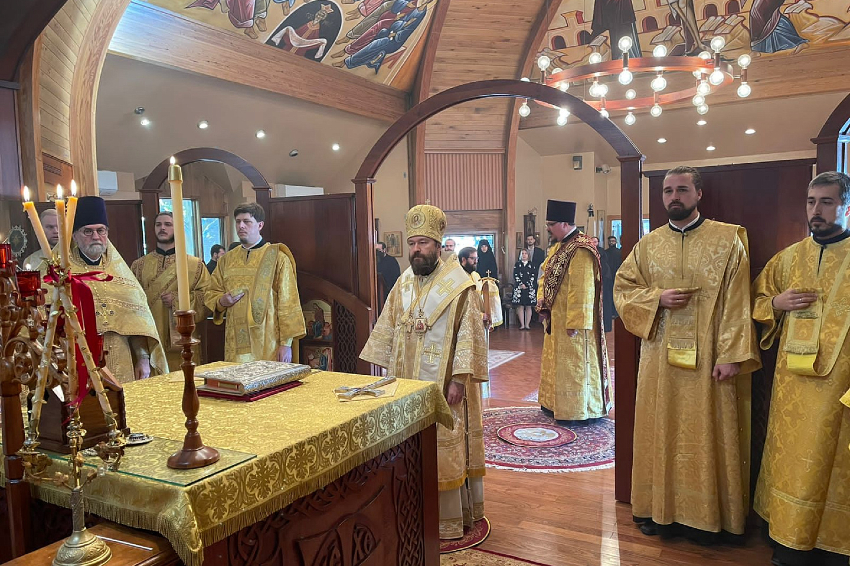 Department of External Church Relations (DECR) Chairman celebrates the Divine Liturgy at the church in honor of the Three Hierarchs at St. Vladimir’s Seminary in New York (link)

On November 13, 2021, on the feast day of St. John Chrysostom(according to the New Julian calendar), with the blessing of the Primate of the Orthodox Church in America, His Beatitude Metropolitan Tikhon, the Chairman of the Moscow Patriarchate’s Department for External Church Relations, Metropolitan Hilarion of Volokolamsk, celebrated the Divine Liturgy at the church in honor of the Three Hierarchs at St. Vladimir Seminary in New York.

Concelebrating with the Archpastor were the President of the seminary, Archpriest Chad Hatfield, clergymen from among the teachers and students, as well as clerics of the St. Nicholas Patriarchal Cathedral in New York.

Praying at the divine service were the teachers, staff and students of the seminary, as well as the participants of the “Searching the Scriptures” academic theological conference, which had ended the day before and was dedicated to the publication of four of the six volumes of Metropolitan Hilarion’s book Jesus Christ: His Life and Teaching in English.

After reading the Gospel, Metropolitan Hilarion addressed the congregation with the following sermon.

Yesterday we attended the conference “Searching the Scriptures,” and today we are celebrating the memory of one of the greatest interpreters of Scripture of all times, Saint John Chrysostom.

We commemorate him in a chapel which is dedicated to his memory, alongside with two other great hierarchs and ecumenical teachers, Basil the Great and Gregory the Theologian.

In today’s Gospel we heard the words of Jesus Christ from the Gospel of John: “I am the door. If anyone enters by Me, he will be saved.” (John 10:9)

These words are very appropriately chosen by the Church to illustrate the life and work of one its greatest teachers, who in his homilies and writings directed attention of his contemporaries to Jesus Christ.

He (St. John Chrysostom) wanted them to become a “Jesus Generation.”

Now, this phrase “Jesus Generation” doesn’t belong to John Chrysostom. It was first coined fifty years ago, when Billy Graham preached before an audience of several thousands in Chicago. The musical Godspell, based on the parables of Jesus, had only just been composed: it played in theaters all across America. A year earlier, the rock opera Jesus Christ Superstar was performed for the first time, which quickly gained popularity.

With characteristic passion, Billy Graham exclaimed: “It’s interesting to me that, in 1971, the plays, the books, the operas, the movies about Jesus—our generation cannot escape Jesus. And when Good News for Modern Man came out, a new translation of the New Testament by the American Bible Society, they sold 25 million copies. We cannot escape Jesus! I’ve never heard of an opera or a play being about Buddha, or Mohammed, or Gandhi. But our generation has become hung up on Jesus. Young people are talking about Jesus. He’s the subject of conversation today on the campus, in the high schools, everywhere. Young people are discussing Jesus Christ, and they’re asking the question, ‘Who is He?’”

Jesus himself answered this question very clearly. “I am the door,” He said, “If anyone enters by Me, he will be saved.”

Interestingly enough, He doesn’t point to any teaching or commandment as a way to salvation. He points to himself, to His own person. He says: “I am the way, and the life and the truth.”

Not my teaching, but I.

It is not by mere chance that the followers of Jesus at a very early stage of the Church’s development called themselves Christians, not after any particular teaching but after the person of Jesus Christ.

And it is not by chance that the preachers of our times want us to be a “Jesus Generation” rather than just simply followers of a particular teaching.

We are called to live with Jesus, to put Him in the very heart of our spiritual life, to learn who He was by “searching the Scriptures,” but participating in the Divine Liturgy, by receiving His body and blood, by practicing the Jesus prayer.

And indeed, by following His commandments.

I belong to a generation that was not the Jesus generation.

In the 1960s and 1970s, few in the Soviet Union knew or spoke of Jesus Christ: his name was mentioned only in specialized literature on “scientific atheism.”

Believers of various Church communities lived isolated lives; the theme of religion practically did not exist in the public sphere; the name of Jesus was not mentioned in magazines or on television or in history textbooks. People knew about the Bible and the Gospels mainly from atheist literature.

For nearly two thousand years already now the call has resounded on earth: “I am the door. If anyone enters by Me, he will be saved.”

Millions of people entered and continue to enter through this door. Currently more than two billion inhabitants of our planet consider themselves followers of Jesus, belonging to various Christian confessions, and each day the global community of Jesus’ disciples increases by tens of thousands of new members.

Christianity began from something that by human standards can be called a complete failure. The tragic death of Jesus, as it appeared then to many, erased all hope for the success of the movement that he started. And nevertheless, it was this movement that became the most successful missionary project in the entire history of humankind.

Over the course of two thousand years, the persistent growth in the number of Christians continues, even if today Christianity is facing the competition of other large-scale missionary projects.

In the West, many call our age “post-Christian.”

In order to be convinced that we in no way live in a post-Christian age, it is sufficient to visit one of the Orthodox countries, in which a large-scale revival of religious life continues that began more than a quarter of a century ago.

In the Russian Orthodox Church alone, within 30 years, there have been more than 30,000 churches either built or reconstructed from ruins: this means that a thousand churches were opened each year, or three churches a day.

More than 800 monasteries were opened, which have been filled with monks and nuns, mostly young ones.

More than 50 seminaries and religious schools have been established or resumed activity; theological institutes and universities have appeared; in secular universities, schools and departments of theology have been opened.

This upsurge in religious life in the territory of a former atheist empire, unexpected by many and unprecedented in scale, cannot be explained by natural or sociopolitical factors alone.

It has uncovered a powerful source of spiritual energy, which bears Christianity in itself and which is of a supernatural nature.

This source stems not from Christian moral or social teaching, and not from divine services or theological studies.

It has a single origin—the person of the God-Man Jesus Christ, who continues to act in historical space and time, which he unexpectedly invaded 2000 years ago.

Like a spring, which can be compressed and decompressed, historical Christianity in different ages and in different places has experienced periods of persecution and periods of external prosperity; it has become, correspondingly, a “little flock” (Lk 12.32) at times—a small community of those persecuted and rejected—and, at other times, has become an army of many millions of good soldiers for Christ (2 Tim 2.3).

But external success must never lead to triumphalism, just as an apparent lack of success must not become a cause for discouragement or despair.

Beginning from complete failure, Christianity, in the person of its Divine Founder, has in the final reckoning prevailed in such a victory over the evil and falsehood of this world that there is no other analogue to it in history.

It has compelled millions of people to reexamine their ideas about God, the world, and themselves.

By His intrusion into history, the incarnate God has changed its trajectory once and for all.

Even if the victory that he has achieved is recognized and acknowledged not by all and not in all places, even if many do not notice it—just as 2000 years ago many did not notice that God had come into the world—this victory has absolute and lasting value.

The unflagging interest in Christianity and in the person of its Founder testifies to this.

The strength of Christianity stems from the fact that, having once come to earth, Christ has not left it to go anywhere: in the body He ascended to heaven, to the Father, but in spirit He remained with His followers on earth (Mt 28.20).

The Church that He founded continues to be the place of His living presence, and millions of people are convinced of this in their personal experience.

The post-Christian age will come only after the second coming of Jesus Christ.

As long as the history of humankind continues on earth, Christ will continue to act in this history.

His divine countenance will always attract people, and generation after generation will enter through this door, becoming nothing else than “Jesus generations.”

At the end of the Liturgy, Metropolitan Hilarion was cordially greeted by the President of St. Vladimir’s Seminary, Archpriest Chad Hatfield.

On behalf of the teachers and students of the seminary, he expressed sincere gratitude to the DECR Chairman for the interesting and fruitful communication within the framework of the “Searching the Scriptures” conference, which ended with a common prayer on the feast day of St. John Chrysostom.