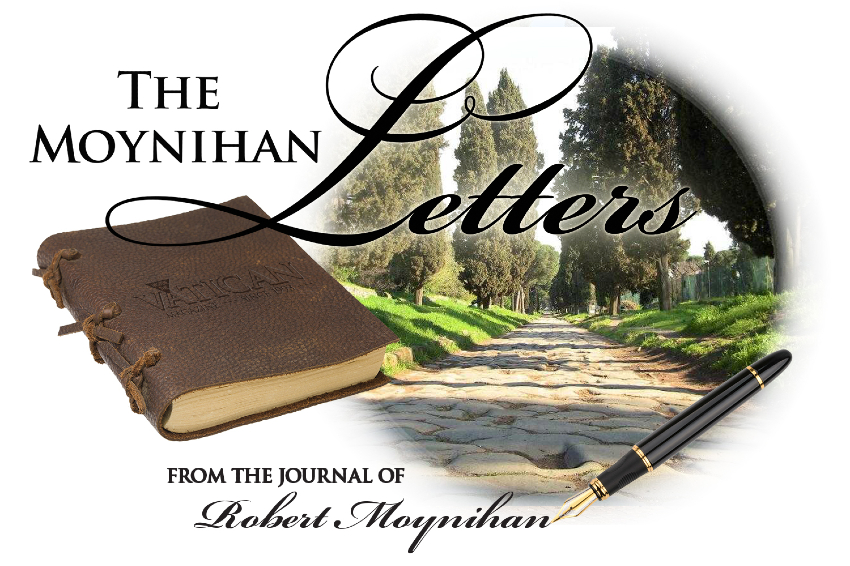 I receive many letters every day, of course, from readers of these emails (which go, for free, to about 20,000 people around the world).

Some are highly critical, some are very supportive; all are appreciated.

My goal in these Letters is… to bring to the attention of readers some concerns of importance to me. My aim is, fundamentally… to make a contribution to that faith, hope and charity, that Christian faith, that Christian hope, that Christian love, which, in my own understanding, has been handed down to us, entrusted to us, by a “cloud of witnesses” over the centuries, so that we in turn may hand it on to those who come after us.

In essence, I conceive of my mission, and of other writers like me, to be one of being “one more link in a long chain” which stretches from the Apostle to our own day, and which must be handed on to all who come after us.

A link in a chain — just that. And hopefully, not to break the chain, not to become a broken link, preventing, or impeding, the chain from being carried on…

In all of this, my concern is “for the children,” for all children, all souls, who should have the opportunity to hear truth, to live in freedom, and in good health, and to grow in grace and wisdom in the prospect of eternity, of eternal life. For the children, then; for them, not against them…

I thought that by including some of these letters (below), readers may have a sense of the crosscurrents that I and, all of us, face in this present time.

A blessed Advent to all. —RM

I don’t know if you are aware of the comments made by the Garabandal visionary Conchita about the Holy Father visiting Russia.

This is what she said: “The Pope will go to Russia, to Moscow. As soon as he returns to the Vatican, hostilities will break out in different parts of Europe. Russia will march upon all nations of Europe particularly Italy and will raise her flag over the dome of St. Peters. The flock is about to be dispersed and the Pope will suffer greatly.”

Looking at the world situation, with Russia amassing it’s military at its border with Ukraine, a weak president in the White House and a weakened US military, this could happen soon. I think we can expect China to invade Taiwan before this president leaves office.

There is a lot to pray about!

[Responding to the first of our “Dr. Nathanson Files”]:

Great feature. Reminds me of Edward Bernays’ techniques. Cigarettes were named torches of freedom to link smoking with women’s rights. You do great work.

[Responding to the letter just sent about the Pope possibly meeting with Kirill again.]

Bob, you’re such a gift to the Church! Praise be to Jesus Christ!

Several weeks ago, you agreed with my idea of asking Metropolitan Hilarion to write and publish his thoughts on the traditional Latin Mass in the wake of Traditionis custodes. I presumed it would be a long shot for him to express any kind of opinion on an internal papal decision, but I still hoped he would write or publicly say something about the Mass itself.

I won’t presume to ask you if he responded one way or the other, but I would like to add that Bishop Schneider’s last interview about the consecration of Russia was interesting for his mention of friendships with Orthodox. I still hope he could become acquainted with Metropolitan Onuphry of Kiev, and one or two other bishops of the UOC (Ukrainian Orthodox Church) as well.

There is some thinking here at Our Lady of Guadalupe Seminary now that if Orthodox clergy, bishops, theologians or writers would express their deep respect and preference for the traditional Roman rite, it could have some positive effect by way of the ecumenical spirit in Rome.

Cardinal Koch would probably be sensitive to Orthodox voices on the issue.

Pope Francis’s words about bygone “decisions” in the Catholic Church that provoked division eminently apply to him, including his stated conviction that ending Summorum Pontificum was necessary for the unity of the Church.

I learned over the summer in my reading that one or two late 14th century Popes actually ordered the Greeks to adopt the Roman rite, by way of an emperor who had returned to unity. And when a Pope told the tenuously (or only theoretically) united Greeks, a few years after the union Council of Lyons, that they had to add Filioque to the Creed, he said that one faith requires one profession of faith. A decision that presumably only provoked or strengthened division, but in the name of unity.

I think this barring of the unvaccinated “unclean” from the Church is just disgusting. I have seen Episcopalian churches in my area doing this, and it shocked me as un-Christian. To see a Catholic diocese doing this makes me boiling mad.

Jesus Christ never ejected anyone from coming to listen to Him or follow Him. He accepted the poor, the sick, the so-called unclean, everyone, so how can a bishop who claims to follow Christ practice such discrimination?

I think we need to ask Bishop Heiner Koch that proverbial question of what would Jesus do?

The cowardice of prelates and Church leaders in accepting lockdowns and refusing to give the sacraments was extremely shocking and scandalous, and this discrimination against the unvaccinated seems to be another manifestation of the same cowardice and selfishness.

[Responding to the same letter]

Our condo association immediately changed their rules and made all measures (like wearing masks) apply to all persons, regardless of vaccination status. This new science seems to make vaccine passports generally useless.

Add to the fact that both the virus and the vaccines can injure and kill people, it would seem to be best left to each person as to which way to gamble.

Here in Germany where I am an organist I would not attend or play in a church building where people were unvaccinated and not wearing masks. Even our beloved Pope Benedict the Great has been vaccinated.

[Responding to “in Berlin the unvaccinated are barred from attending Mass”]

As right they should be, Bob. I would not allow anyone who is not vaccinated to enter my home to potentially kill me and my family. Why should I let them into my Church to do the same thing? Let them go to a church for the unvaccinated idiots, who think Viganò and Cordileone went to medical school. You are on the wrong side of history Bob.

[responding to the same letter]

Germany appears to have gone from bad to worse.

So far not a “peep” from Bergoglio on Germany.

The Catholic Church worldwide is dysfunctional and becoming worse.

The corruption especially within the Hierarchy is enormous. Unfortunately, praying the Rosary or whatever is not going to change anything. There is not even a “ glimmer of light” in the tunnel of this ongoing disaster by Bergoglio and his apostates.

I hope that you are well and the Blessings of Christmas to you and your family.

As you appreciate the authentic gift of prophecy in the Church, I recommend to you the French-Canadian priest Fr. Michel Rodrigue who, much like St. Pio, has been visited by Almighty God since he was a young child. It appears that God catechized him and told him at this early age that he would become a priest. He is humble and obedient to his bishop and he has a joyful sense of humor as well as many spiritual gifts, including deliverance and healing.

In January 2019 the Heavenly Father told him (through St. Michael the Archangel, his patron saint), “The blasphemies of mankind against God and against life in all its forms have become so great that purification is now required.” (This was the first time in his experiences that “purification” was spoken of in the present tense.)

Almost certainly, that was in reference to the SARS CoV-2 virus, the pandemic and the resulting government and globalist actions taking place all over the world.

Then, in March of 2020, Fr. Michel wrote in a letter to some of his donors (he is building a monastery for his new apostolic fraternity), “The great events of the purification will begin this fall.”

I believe this refers to the disastrous election or selection of Joe Biden and Kamala Harris with their very bad cabinet members and their destructive policies, together with the U.S. House and Senate: our domestic safety is in shambles due to both the border situation and the rejection of law and order; many retired military are openly saying that a large kinetic war with China is inevitable; and the globalists, Communists and Freemasons all over the world are in jubilation over all of this.

Now in September of this year, he sent a letter to Daniel O’Connor (MA in Theology, devout Catholic and a disseminator of some of Michel’s information) about a vision of Archangel Gabriel he had on the eve of the Feast of St. Joseph, March 18, 2021.

But, he, Joseph will now “withdraw discreetly” on December 8 [Editor’s note: today], the end of the Year of St. Joseph.

Gabriel begins to relate this to 2 Thessalonians, Chapter 2 — the one who restrains the man of lawlessness. Now, Gabriel says, with Joseph’s “departure,” a New World Order built on division and confusion will come out into the open, scandals will erupt again in the Church, etc.

But the Immaculate Heart of Mary will begin the start of the triumph of her Immaculate Heart for her children and for the Church. “The Church will go through the pains of a purification where the Virgin Mary will accompany her as Mother of sorrows.”

I’ve been in the charismatic renewal for many decades now and am reading Ralph Martin’s A Church in Crisis. I like to follow Archbishop Viganò, Cardinal Mueller and other good shepherds, all of whom strongly suggest these same things, intellectually, as real possibilities. With Fr. Michel, it is prophetic, not intellectual.

A link to Fr. Michel’s apostolic fraternity, approved by Pope Benedict in 2009 is here: http://benoitlabre.org/

And the link to O’Connor’s article is here, with the message itself beginning about half-way down the page: https://dsdoconnor.com/2021/09/27/new-prophecy-from-father-michel/

God bless you, brother, in your steadfastness for the truth of the Gospel of the Lord Jesus Christ!