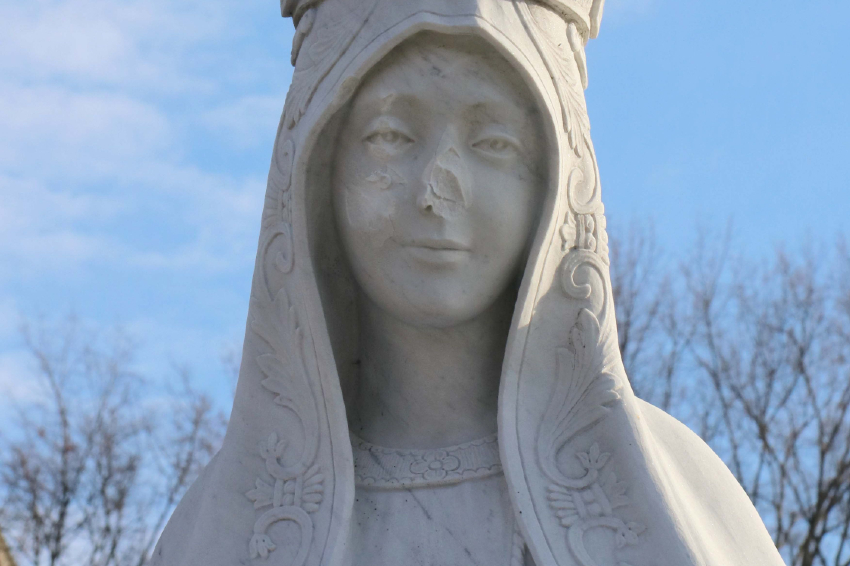 A photo of the vandalized face and nose of the statue of Our Lady near to the National Shrine of the Immaculate Conception in Washington, D.C. The vandal also knocked off the statue’s hands.

A video camera on the evening of December 5 captured images of a man wielding a hammer and slamming it repeatedly against the Virgin’s face.

The videos of the attack were published by the capital city’s police department yesterday evening — the evening of December 8, the Feast of the Immaculate Conception of Mary.

Here below is a link to the video, and to a story by a Washington D.C. radio station, —RM

Note to all readers: We are now beginning our Christmas fund-raising drive. We hope to raise $30,000 between now and December 31 to support these letters, interviews, videos, and analyses during 2022. Please go to this link to make your donation.

D.C. police are investigating vandalism in a religious garden in Northeast, in which a man wielding a hammer knocked off a statue’s hands and pummeled its face before leaving with the hands.

It happened in the Rosary Walk and Garden of the Basilica of the National Shrine of the Immaculate Conception late Sunday night.

Surveillance video of the attack on the Our Lady of Fatima statue shows a man knocking off the statue’s hands, stepping back, pausing to examine the effect, hopping back onto the statue’s pedestal to pound the statue’s face and then calmly walking away with the hands. [video below]

“Though we are deeply pained by this incident, we pray for the perpetrator through the intercession of the Blessed Virgin Mary under her title of Our Lady of Fatima,” Monsignor Walter Rossi, rector of the Basilica said in a statement.

Video of the attack naming the vandal as a “person of interest” for destruction of property was posted by police on Wednesday — which happens to be the Catholic holy day of the Feast of the Immaculate Conception. The feast day honors the Church doctrine belief that Mary was born and lived without sin before becoming the mother of Jesus Christ.

“Today is a holy day for her — it’s the Immaculate Conception,” a visitor to the garden told NBC Washington. Asked about the vandalism the woman said, “It’s not your belief, don’t come. It’s my belief. I come.”

She believes the man who damaged the statue is hateful.