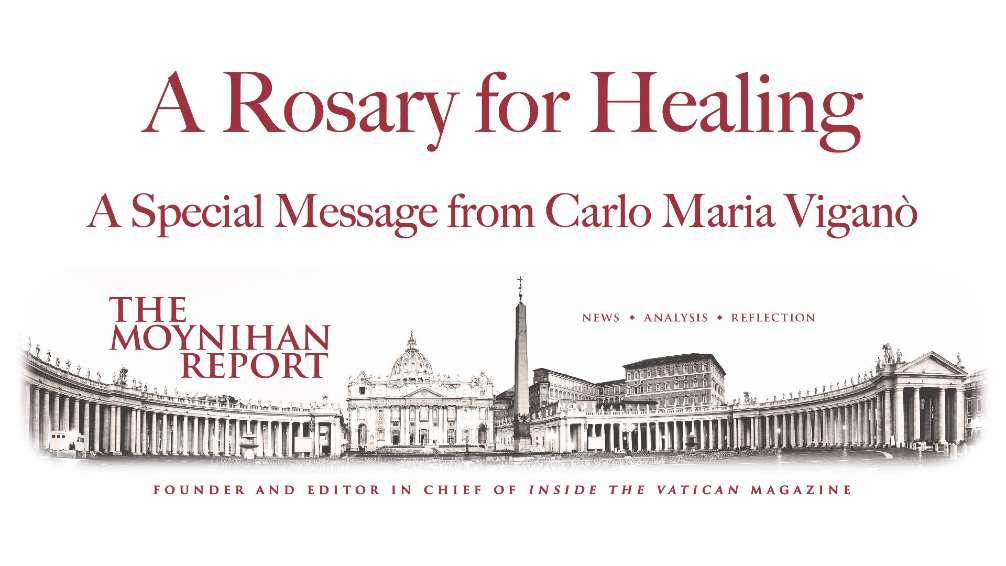 “In a few days we will celebrate the Birth of the Savior, the true Greatest Reset with which the Holy Trinity redeemed the children of Adam and Eve from the slavery of the devil, through the Incarnation, Passion, Death and Resurrection of Our Lord.” —Archbishop Carlo Maria Viganò in a message sent today in support of a Rosary for Healing prayed in the United States at 1:00 p.m. today.

About 100 people prayed a Rosary today in the Church of St. John the Baptist in Front Royal, Virginia. The initiative is inspired in part by national Rosary Campaigns in past decades in times of great national crisis, as in Austria in 1955 and in Brazil in 1964. The current crisis is global and seems to require a global effort repentance and prayer if humanity is not to sink into even more serious problems and sorrows in the months ahead. The campaign therefore is part of an effort to respond to the call for a “Global Reset” which has no clear reference to Jesus Christ or the spiritual nature of man but rather proposes a world where Christ is set to one side, along with the spiritual aspect of man’s nature. The “Greatest Reset” — which Archbishop Viganò refers to in the quote cited above is the coming into the world of Christ, providing humanity with the hope of eternal life.

The Archbishop heard of our initiative and offered this brief reflection on the meaning of such prayer in times such as ours. The video is available on Rumble (link) and YouTube (link).

Here is the transcript:

Faced with the global coup d’état that we have been witnessing for the past two years, many Catholics are unable to understand how the globalist elite has managed to avail itself of the collaboration of the Catholic Hierarchy, and how the Bishops and priests have not grasped the subversive matrix of the so-called pandemic emergency.

Those who are not contaminated by conciliar ideology, however, know well that we are facing an epochal battle against the powers of hell, after decades of doctrinal, moral and spiritual crisis. Let’s acknowledge it: dialogue with the world, openness to the demands of secularized society and ceasing to oppose, with the courage and conviction of past centuries the errors of modern thought, have proved to be a failed experiment, if not a deliberate attempt by her own Shepherds to destroy the Church of Christ. And if today the civil and ecclesiastical authority proves to have betrayed its mandate, the citizen and the faithful are left with only resistance, in the persuasion that obedience to God comes before obedience to men (Acts 4:19).

This resistance materializes in two ways.

The first way, with prayer and recourse to God, in the confident certainty that He will neither allow the Church to be overwhelmed by the gates of hell, nor that individual faithful be abandoned to themselves. This prayer, and especially the Holy Rosary, are an invincible weapon that moves the heavenly hosts to our aid, led by our Leader Mary Most Holy, Queen of Victories. And that’s what you are doing today.

The second way to oppose the tyranny that is establishing itself is action: an action of contrast and resistance to the Great Reset, to the ideology of the New World Order, to the global plan desired by the anti-human and anti-Christian elite that interferes in political, social, economic and health care decisions of the States. A real coup d’état, perpetrated with the complicity of the rulers, the media and the Hierarchy of the Catholic Church itself. For this I have launched my appeal to an Anti-globalist Alliance, whose principles – based on the Catholic Teaching and on the Social Doctrine of the Church – can inspire the birth of movements that refute the globalist agenda point by point and oppose it with a program of true moral and spiritual rebirth of nations.

In a few days we will celebrate the Birth of the Savior, the true Greatest Reset with which the Holy Trinity redeemed the children of Adam and Eve from the slavery of the devil, through the Incarnation, Passion, Death and Resurrection of Our Lord.

Let us ask the divine Majesty to put an end to this hell on earth, because we have understood that this infernal tyranny of the New World Order is the bitter and poisoned fruit of our having conformed to the world – nolite conformari huic sæculo (Rm 12, 1-2) – and having believed we could descend to pacts with Satan. Let us restore the ordo Christianus – the Christian order – by starting with ourselves, with a true reform of morals, a sincere spiritual conversion, a solid doctrinal formation and a true holiness of life. If we make Christ the King reign in our hearts and in our families – the Child King before whom the shepherds and the Magi have prostrated – we can hope that that Kingdom will also extend to our societies, to Nations, to the whole world. Regnum veritatis et vitæ: regnum sanctitatis et gratiæ: regnum justitiæ, amoris et pacis. “The kingdom of truth and of life; the kingdom of holiness and of grace; the kingdom of justice, of love, and of peace.”

To all of you, and to all those who with prayer and action are zealous for the glory of God and the salvation of souls, go my most sincere wishes for a Holy Christmas, together with my paternal Blessing.