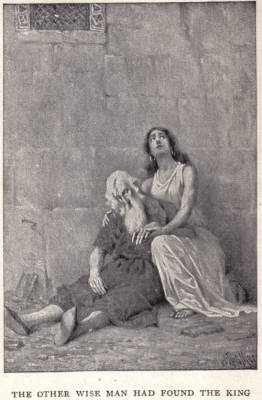 An image from 1895 edition of The Other Wise Man, written by Henry van Dyke, published by Harper and Brothers. The words quoted — “The other wise man had found the king” — are the very last words of the little book in which Van Dyke tells the story of Artaban, a wise man from Persia who, 2,000 years ago, planned to set out with the other three wise men — Caspar, Melchior and Balthasar (link and link) — to find the Christ Child, but Artaban was delayed along the way…

As the year comes to an end, some of you may be wondering why in the world I am publishing daily parts of a little-known fictional story about… a fourth “wise man”(!) from the East named Artaban.

I will try to explain.

Artaban does reach Bethlehem, after doing many good deeds along the way, which delayed him, and he witnesses the terrible slaughter of the innocents — and saves one baby, using one of the jewels he had intended to give to the newborn King to bribe the soldiers not to kill the infant.

Artaban then traces the path that the Holy Family had taken into Egypt, and Artaban spends many years in Egypt, but is unable ever to find Jesus.

Toward the end of his life, after 33 years of seeking and seemingly not finding the Christ Child, Artaban comes out of Egypt and arrives at last in Jerusalem.

There, he uses the last of the gifts he had intended to give to the newborn King, a pearl of great price, to ransom a young girl who has been seized to be made into a slave in order to pay off the debts her dead father had been unable to pay.

As the skies darken, and the ground shakes — it is clearly the day of the crucifixion of Our Lord — a tile from a rooftop slides off and strikes Artaban on the head, mortally wounding him. (This is the scene depicted in the image above.)

And this is how Artaban‘s story ends:

“One more lingering pulsation of the earthquake quivered through the ground. A heavy tile, shaken from the roof, fell and struck the old man on the temple. He lay breathless and pale, with his gray head resting on the young girl’s shoulder, and the blood trickling from the wound.

“As she bent over him, fearing that he was dead, there came a voice through the twilight, very small and still, like music sounding from a distance, in which the notes are clear but the words are lost.

“The girl turned to see if some one had spoken from the window above them, but she saw no one.

“Then the old man’s lips began to move, as if in answer, and she heard him say in the Parthian tongue: ‘Not so, my Lord: For when saw I thee an hungered and fed thee? Or thirsty, and gave thee drink? When saw I thee a stranger, and took thee in? Or naked, and clothed thee? When saw I thee sick or in prison, and came unto thee? Three-and-thirty years have I looked for thee; but I have never seen thy face, nor ministered to thee, my King.‘

“He ceased, and the sweet voice came again.

“And again the maid heard it, very faintly and far away.

“A calm radiance of wonder and joy lighted the pale face of Artaban like the first ray of dawn on a snowy mountain-peak. One long, last breath of relief exhaled gently from his lips.

“His journey was ended. His treasures were accepted. The Other Wise Man had found the King.”

So this is the reason we are sending out this story at the end of this year, the 2021st year since the birth of the Lord… a long time in human terms, but a brief time, barely an instant, in the perspective of eternity…

…a point all of our fathers and mothers (both in the flesh, and in the Church), tried so often, in so many ways, and with such great emphasis, to tell us, as if this were the most important thing:

That whatsoever any one of us does, whatever act of justice and fairness and respect and devotion and love, which any of us does for any other human being, whether from our own family, or from any family in this world…

…that action, that deed, that gesture of love, is done, in truth, for Christ Jesus, for the King himself.

A blessed New Year to all. —RM

P.S. I had thought I might make 200 letters this year, but I fell a little short, as this is only Letter #197. I hope you have enjoyed the letters. They are intended to provide a glimpse into some of the things I see on my own pilgrimage in these times, and I hope they may be the source of some understanding or insight, and also of some hope, for all who read them.

We have now posted the 4th in a 10-part series of a reading of the classic Christmas story “The Other Wise Man.” It is available here on YouTube (or by clicking the video below) or on Rumble.

Note to all readers: We are concluding today our Christmas fund-raising drive. We had hoped to raise $30,000 before December 31 to support these letters, interviews, videos, and analyses during the upcoming year. We have raised $2,955 thus far. Thanks to all who have supported us. Please go to this link to make your donation

A Video Interview Wrapping Up 2021

Here is a link to an hour-long interview I did last week with Jim Hale of Lifesitenews, in which Jim asks me to discuss some of the events of 2021 in a kind of year-end wrap-up. Some of you may find the interview of interest. Lifesitenews writes:

“Unite the clans”: Viganò biographer says “evils” of Great Reset must be met with penance, prayer

Author of Finding Viganò, Robert Moynihan, sits down with LSN TV’s Jim Hale to discuss the latest efforts taking place to combat the Great Reset. Moynihan also shares his vision for the future of the fight and his next book on Archbishop Viganò, explaining that resistance to the “cage” being constructed for mankind must be met with prayer and penance.