Catherine cried out to the Popes of her time, a time of many troubles, who were residing in Avignon, in France, to return to their rightful place, in Rome, the See of Peter.

She was not timid.

She did not allow a sense of false piety to distract her from her high calling, which was to admonish the Popes until she accomplished her task: the return of the holder of the See of Peter to his rightful place, in Rome.

A great saint, a saint who served God with all her heart and all her life. 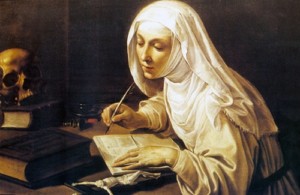 And today is her feast day.

One of the great biographies of St. Catherine was completed in 1949, a few months before her death, by Sigrid Undset, a wonderful writer born in Denmark in 1882. She had earlier written the great trilogy entitled Kristin Lavransdatter. (When I was young, my mother handed the volumes to me, telling me I needed to read Undset to understand medieval Europe.)

“Naked power had taken the place of justice, there was no respect for the law, no protection for personal possessions… Pilgrims who came to pray at the tombs of the apostles were robbed, peasants attacked outside the city walls, women were raped, injustice sat on the throne of justice, debauchery dwelt in the holy places, and want in the bosom of the family. The churches of that sacred land were in ruins; in St. Peter’s and the Lateran, cattle grazed at the foot of the altars… The Egyptian obelisks were thrown down and smashed; fragments of them were buried among the remains of walls and rubble. As a result of the absence of the Popes, factional war and enmity between small groups flourished unchecked. General confusion and depopulation followed, and the great poets of once-proud Rome hung their harps on the willows and broke into the lament of the prophets: ‘How deserted is the town which was once so full of people, the mistress of the peoples is become a widow.”

Then Unset writes of a mysterious mystical experience that marked Catherine’s life.

Something happened to Catherine while she was in Pisa — yes, the beautiful city of the Leaning Tower! — in 1375 A.D, when she was 28 (she would die five years later).

“On Laetare Sunday —mid-Lent Sunday — her secretary, the Dominican friar from Capua, Raimondo delle Vigne (born in about 1330), celebrated Mass in the church of St. Christina and gave Catherine Holy Communion.

“She lay on her face for a long while afterwards without moving.

“Raimondo and her friends waited patiently — they hoped that when she awoke from her ecstasy she would have a message for them from the lips of her Bridegroom.

“Suddenly it was as though the outstretched figure was lifted up; she knelt with closed eyes and her face shining with supernatural bliss.

“She stretched out her arms, with the palms of her hands outwards, stiff and still: then she fell suddenly to the ground as though mortally wounded. A little while after she recovered consciousness.

“Some time later she called Raimondo to her and whispered: ‘Father, know that by the grace of Our Lord Jesus I now bear His stigmata on my body.’

“Raimondo had guessed by her movements what had happened, but he asked her to describe the manner in which the gift of grace had been given to her.

“‘I saw Our Savior on the cross lean down toward me in a bright light. And when my soul tried to hasten to meet its Creator, it forced my body to rise. Then I saw how five jets of blood came from the five wounds and streamed toward my miserable body. I cried out, “Oh my Lord and Savior, I beg You, do not let the wounds on my body be visible outwardly” — and while I spoke the jets of blood changed to shining light, and as rays of light they struck my hands, feet and heart.’

“In answer to Raimondo’s question Catherine said the pains from the wounds, especially the wound in the heart, were so violent that it seemed impossible for her to suffer such agony and live, unless God worked another miracle.”

On November 24, 2010, Pope Benedict XVI gave a talk on St. Catherine of Siena at his General Audience as part of a long series of talks on saints. (link)

Benedict on that occasion said:

“Another trait of Catherine’s spirituality is linked to the gift of tears.

“They express an exquisite, profound sensitivity, a capacity for being moved and for tenderness.

“Many Saints have had the gift of tears, renewing the emotion of Jesus himself who did not hold back or hide his tears at the tomb of his friend Lazarus and at the grief of Mary and Martha or at the sight of Jerusalem during his last days on this earth.

“Here we can understand why, despite her awareness of the human shortcomings of priests, Catherine always felt very great reverence for them: through the sacraments and the word they dispense the saving power of Christ’s Blood.

“The Sienese Saint always invited the sacred ministers, including the Pope whom she called ‘sweet Christ on earth,’ to be faithful to their responsibilities, motivated always and only by her profound and constant love of the Church.

“She said before she died: ‘in leaving my body, truly I have consumed and given my life in the Church and for the Holy Church, which is for me a most unique grace’ (Raimondo da Capua, S. Caterina da Siena, Legenda maior, n. 363).

“Hence we learn from St Catherine the most sublime science: to know and love Jesus Christ and his Church.” 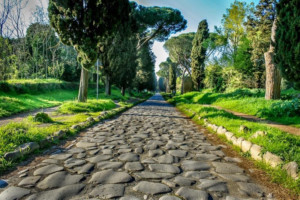