“Ah, let me cross over and see this good land beyond the Jordan, this fine hill country, and the Lebanon!” – Deuteronomy 3:25

I am writing to invite you to join with several dozen other readers of this letter who have become “friends of Lebanon” by donating even a small amount — a widow’s mite — to support relief efforts in Beirut, which was struck by a terrible explosion and shock wave on the evening of August 4, nine days ago now.

Tomorrow at 11 a.m. Eastern Standard Time (6 p.m. in Lebanon, 11 a.m. in New York, and 8 a.m. in California), we will be hosting a Zoom session with several Lebanese Catholics who are leading relief efforts in the city of Beirut. We will be able to talk with them directly and learn about the actual situation on the ground in Beirut.

More than 150 people died from the shock wave, several thousand people were injured, and some 300,000 people have been left homeless. Aid is being given to assist the people of Beirut from many countries, but the people we are working with are people we know personally, and they, along with Catholic university students in Beirut, are going house to house and helping in the most direct way possible.

The Zoom session will open a few minutes before 11 a.m., Eastern Standard Time, and last an hour. Everyone who makes even the smallest donation will automatically receive an email invitation to attend the session containing the Room Number and the Password to enter our meeting room. (If you have already donated you will be receiving an email with the meeting information.) Please note that if you are unable to attend this first Zoom meeting on Friday, August 14 at 11:00 a.m. Eastern, we will share the recording with you and you will be invited to attend each upcoming Zoom meeting with our friends in Lebanon who are leading relief efforts in Beirut.

Each person who contributes will become enrolled in a group called “Friends of Lebanon.” Please join us, by clicking on the link below to make a donation. —Robert Moynihan

Click to Donate and Become a “Friend of Lebanon” 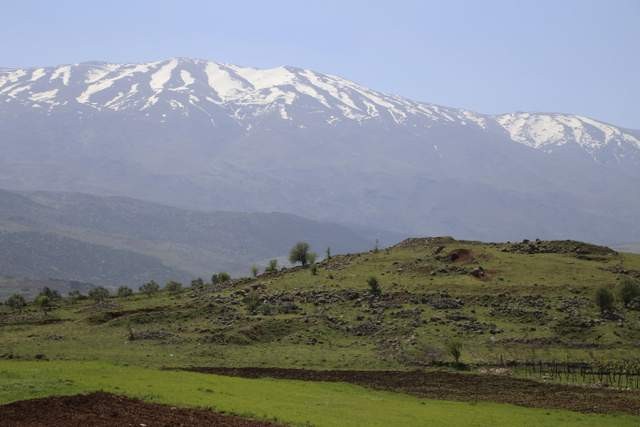 (Photo above: Looking across the southern Bekaa toward Jebel al-Sheik (Mt. Hermon), on the border of Lebanon, Syria and Israel. (photo by Béatrice Le Bon)

Lebanon’s name was mentioned 71 times in the Old Testament, its regions are referred to several times in the New Testament, and extra-canonical literature speaks about it in ten cases. The Old Testament is full of praise for Lebanon’s natural beauty and resources. The cedars of Lebanon were the most precious and costly wood desired by rulers of the surrounding countries. In images of Lebanon’s imposing heights, the wealth and variety of plants, and the sweet odor of its perfumes and fragrances, God’s love for men and women is celebrated. Lebanon’s role in the history of salvation becomes even more evident in the writings of New Testament authors. Jesus Christ, the Son of God, visited the Phoenician cities along Lebanon’s coast, preached to the people there, and healed the sick.

Lebanon is regarded by some as part of the Promised Land. This can best be understood in a spiritual sense. Lebanon’s mountains offered choice woods to build the sanctuary — the Temple — where the glory of God dwelt and was venerated: no other wood was precious enough for that purpose. Jesus Christ, the Son of God, traveled through Phoenician cities, nowadays part of Lebanon. The soil on which he walked is “holy ground.” Inasmuch as Christians see themselves as the people of God and as true followers of the Son of God, any place or material chosen by the Lord and set aside for His worship is sacred and any place that received the footprints of the Word Incarnate is sacred land, the sign of God’s ongoing presence with His people.

Click to Donate and Become a “Friend of Lebanon”