We draw near to the end of Pope Benedict’s pontificate. He will leave his papal throne at 8 p.m. on Thursday, in three days. After that hour, there will be no Pope. The see of Peter will be vacant. 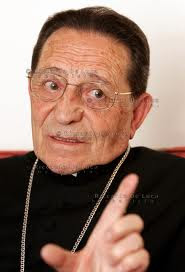 The first thing that happened today was that Benedict received in audience at 11 a.m. the three cardinals who had carried out the investigation into the “Vatileaks” scandal, starting in April and continuing up until a fee days ago. (According to Ignazio Ingrao, Cardinal Herranz (left) was still meeting in recent days with witnesses and doing final additions and revisions to the corpus of testimony, even after the two-volume secret report, bound in red, totaling 300 pages, was handed over to Pope Benedict XVI on December 17.)

The Pope received Cardinals Julian Herranz, Jozef Tomko, and Salvatore De Giorgi (shown here, top to bottom, Herranz, Tomko, De Giorgi), the commission he appointed in April “to investigate the leaks of private information,” as the Vatican put it in a communique released today.

They were accompanied by the commission’s secretary, Fr. Luigi Martignani, O.F.M., Cap.

Here is what the Vatican said today after the meeting in a statement: 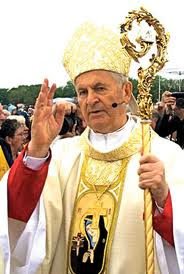 “At the conclusion of their mission, the Holy Father thanked them for the helpful work they did, and expressed satisfaction for the results of the investigation.

“Their work made it possible to detect, given the limitations and imperfections of the human factor of every institution, the generosity and dedication of those who work with uprightness and generosity in the Holy See at the service of the mission entrusted by Christ to the Roman Pontiff.

“The Holy Father has decided that the acts of this investigation, known only to himself, remain solely at the disposition of the new Pope.”

Now, this is an interesting statement. 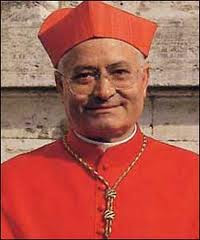 But this communique says the exact opposite! It says “their work made it possible to detect… the generosity and dedication of those who work with uprightness and generosity in the Holy See at the service of the mission entrusted by Christ to the Roman Pontiff.”

The investigation was thought, by everyone, to be aimed at ferreting out the “bad apples.” But this official statement says, more or less, “we identified the good apples.”

And then, what does it say about these “good apples,” the men in the Curia who can be trusted?

It says “the Holy Father has decided that the acts of this investigation, known only to himself, remain solely at the disposition of the new Pope.”

In short, one might paraphrase it this way: “Your work has identified those within the College of Cardinals and the Curia who can be trusted, but this list of trustworthy men is for the eyes of the next Pope only.”

One blogger put it eloquently in a Rorate Coeli web-posting: “The Pope can play the Roman game too. The guilty ones won’t know if they’ve been fingered or not, and will be on best behavior until the next Pope (one can only hope) sweeps the lot of them out of Rome altogether.”

This Vatican communique would seem to exclude any reading of the entire dossier by the whole College of Cardinals prior to the election of a new Pope, now expected to take place sometime between March 10 and 20 (we should have more clarity on the date by week’s end).

It has been reported that the three cardinals, Herranz, Tomko, and De Giorgi, during the first days of March, will be present with all the voting cardinals, to talk to them. During those first days of March, the approximately 100 older-than-80 (non-voting) and the approximately 115 younger-than-80 (voting) cardinals will all meet together. On can assume information will be shared, as the Holy Spirit leads those who must vote toward the truth they need to know.

Those first days of March may very well be the days when discussions will be held that will set the stage for the actual vote itself, which will only come after those meetings, when the over-80 cardinals are excluded and the Conclave of the approximately 115 younger cardinals begins.

So, all the cardinals will be advised of the general contents of the report, but it appears that they will not be able to read the entire 300-page dossier, which will be kept for the new Pope’s eyes only.