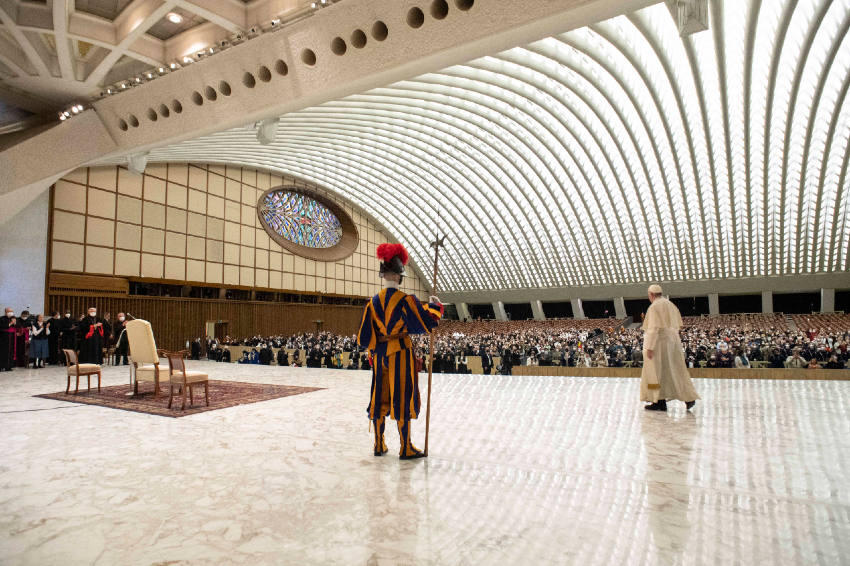 Pope Francis made a remark today, apparently off the cuff (he seems to look up from his prepared remarks and speak extemporaneously), in the middle of his catechetical talk to those attending his General Audience in Rome which has sparked considerable comment, some favorable and much outraged.

In the passage, he speaks of the ontological character of one’s Christian identity after baptism.

What he means is that the grace of baptism, as the Church has always taught, changes the very being of a person so that all baptized are incorporated mystically but really — in actual being — into the body of Christ, that is, into the Church. He is stressing this point.

Francis said this incorporation is so profound and so real that nothing a person can do can eradicate it. That is, that all sinners (and of course we are all, according to Christian doctrine, sinners) are part of the body of Christ, part of the Church even as sinners. The Pope stressed this in his brief extemporaneous comment, saying (he is citing a hypothetical Christian who asks a priest or the Pope whether certain people can really be part of the Church; that is why the first part of this quotation is in quotes, citing this question): “‘Let’s think about those who have denied the faith, who are apostates, who are the persecutors of the Church, who have denied their baptism: Are these also at home?’ Yes, these too. The blasphemers, all of them. We are brothers. This is the Communion of Saints.” Here is a link to the precise moment when he speaks these words, which lasts about a minute. (link) Below we have a video of the entire Audience.

These words of the Pope have now been circulated widely on the internet.

I have three comments.

First, it is Catholic teaching that sinners are still members of the Church despite their sins. As Humble Catholic (@HumbleCath) commented here: “Quick reminder that everyone who is baptized is a member of the Church. This is the same way Paul and John used the term saints.” As The Catechism of Trent on the Communion of Saints teaches: “Those who are bound in the thraldom of sin and estranged from the grace of God, they are not so deprived of these advantages as to cease to be members of this body” (Thanks to Nathan Bird @NathanBirdCHA for pointing this out here).

Second, this comment, though it expresses traditional teaching, does seem open to misinterpretation and confusion, as many have noted on the internet including Danny Toma (@Danny_Toma) notes here: “The problem is not that it is heretical per se (there is a perfectly orthodox interpretation, as the baptized who deny the faith can always repent and return to full communion). The problem is that it is ambiguous and subject to different interpretations.” This possible confusion or ambiguity is expressed by the commenter Korbinian (@KorbinianOpn) here: “If apostates and blasphemers are in the Communion of Saints, what is the point of trying to be in the Communion of Saints? If this is true and one could engage in any apostasy or blasphemy and still remain in the Communion of Saints, what’s the point of trying?”

Third, regarding those who are attached to the Traditional Latin Mass these words would certainly seem to give them comfort, emphasizing that, even if they have doctrinal concerns about certain interpretations of the Second Vatican Council, they must still be considered, as baptized Catholics, to be members of the Church. Yes, I am saying this a bit “tongue in cheek,” trying to bring a certain sense of calm to those Catholics who feel that the Pope is treating them harshly by limiting their access to the old liturgy. I speak a bit humorously, but with good intention… to use these very challenging words of the Pope in favor of those toward whom he has seemingly been so severe. —RM

P.S. We have included below the video of the Pope’s General Audience from today, February 2, 2022, with English translation. The part that has become controversial begins at minute 17 and goes for a minute or so. 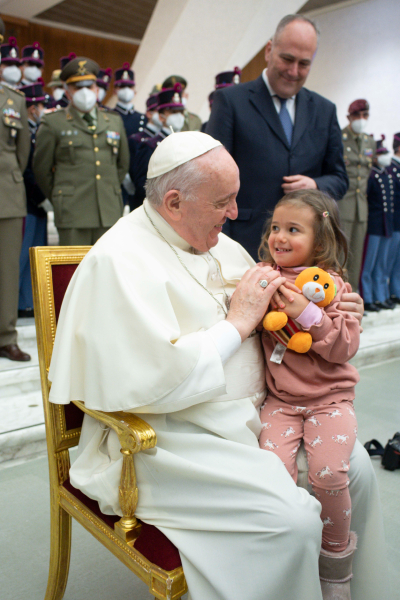 Pope Francis at his Audience in Rome today

Below is the video of the entire Audience of today, February 2, 2022.