All of Chile’s Bishops Resign, Pope Will Decide Whether to Accept or Not

(Below, Pope Francis with all of Chile’s bishops in Rome yesterday) 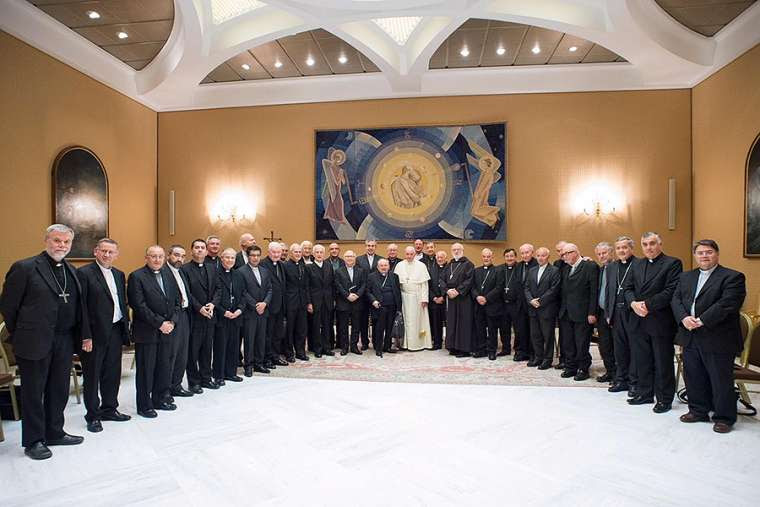 The big “news” today is the decision of the entire episcopal hierarchy of Chile — every one of the country’s 34 bishops — to offer letters of resignation to the Pope in the wake of years of a clerical sexual abuse scandal in which the bishops did not effectively end the abuse.

The decision to hand in these letters of resignation came after three days of meetings in Rome with Pope Francis.

Here is a report by Argentine journalist Inés San Martín of Crux (link). The essence, referring to events today in Rome:

She writes: “Chilean bishops speaking at a Vatican news conference on Friday announced that all the country’s active bishops have submitted a written resignation to Pope Francis, in the wake of a three-day summit in Rome to discuss their Church’s massive crisis over sexual abuse and abuse of power.

“The decision about the bishops’ fate is now in the hands of Pope Francis, who can either accept the resignations or reject them.

“The bishops presented the resignations on Thursday, and the Pope will make a decision in the weeks to come.”

The resignations come a day after Pope Francis spoke to the bishops after three days of meetings with them in Rome.

Elise Harris, writing for Catholic News Agency (link), summarizes what the Pope wrote: “Pope Francis thanked Chile’s bishops for their ‘frank’ dialogue during a 3-day Vatican meeting on the Chilean abuse scandals, and asked them to focus on serving abuse victims as they return to their dioceses and prepare to implement short and long term resolutions. “After these days of prayer and reflection I invite you to continue building a prophetic Church, which knows how to put what is important at the center: service to the Lord in the hungry, the prisoner, the migrant and the abused,” the Pope said in a letter to Chilean bishops. Published May 17, the letter was given to each of the bishops by Pope Francis during their final meeting earlier that evening.”

So there will soon be more developments in this story, as the Pope makes his decision on what to do about these resignations… 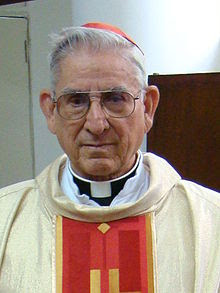 On Saturday, 19 May 2018, at 2:30 pm, at the Altar of the Chair of the Vatican Basilica, there will be a Mass for Emeritus Card. Darío Castrillón Hoyos (photo).

The funeral liturgy will be celebrated tomorrow by His Eminence Card. Angelo Sodano, Dean of the College of Cardinals.

At the end of the Eucharistic celebration, the Holy Father Francis will preside over the rite of the Last Commendatio and the Valedictio.

Born in Medellín, Colombia, Castrillón Hoyos attended the seminaries in Antioquia and Santa Rosa de Osos before going to Rome to study at the Pontifical Gregorian University. He was ordained to the priesthood by Archbishop Alfonso Carinci on 26 October 1952, in the basilica of Ss. XII Apostoli. He finished his studies at the Gregorian, from where he obtained a doctorate in canon law and specialization in religious sociology, political economics, and ethical economics. Castrillón Hoyos also studied at the Sociology Faculty of the University of Louvain in Belgium.

During his time as Bishop of Pereira, Castrillón Hoyos was reported to have walked the streets at night to help feed abandoned children.

While many Latin American bishops refused to accept contributions from suspected drug lords, Castrillón Hoyos accepted donations for his diocese’s charities, arguing that by accepting the funds, they would be diverted from funding crime and instead used to help the poor and needy. He said that when accepting such donations, he had warned the donors personally that their donations “would not save their souls”.

Castrillón Hoyos once disguised himself as a milkman to gain access to the home of drug lord Pablo Escobar, and after revealing himself, the bishop successfully persuaded Escobar to confess his sins.

Castrillón Hoyos also served as Secretary General (1983–1987) and then president (1987–1991) of the Latin American Episcopal Conference, where he took a hard line stance opposing liberation theology, which was popular among leftist Latin American bishops at that time.

I knew Cardinal Castrillón Hoyos, and once placed his photo on the cover of Inside the Vatican magazine, honoring his decision to celebrate publicly in Rome a Mass according to the Tridentine rite.

He was a man of great human courage, great integrity, and deep faith.

May eternal light shine upon him, and may he rest in peace.

Telegram of condolences today from the Holy Father for the death of His Eminence Card. Darío Castrillón Hoyos

Press Office of the Holy See

We publish below the telegram of condolence for the death, which took place tonight, of the Most Eminent Card. Darío Castrillón Hoyos, of the Titular See of Maria al Foro Traiano, Prefect Emeritus of the Congregation for the Clergy, sent by the Holy Father Francis to the Dean of the College of Cardinals, the Eminent Cardinal Angelo Sodano:

I HAVE LEARNED OF THE NEWS OF THE DEATH OF THE DEAR CARDINAL DARÍO CASTRILLON HOYOS AND I WISH TO EXPRESS FEELINGS OF CONDOLENCE TO THE CARDINAL COLLEGE, TO FAMILIES AND TO THE FRIENDS OF THE LATE LAMENTED CARDINAL, REMEMBERING WITH GREAT AFFECTION HIS GENERAL SERVICE TO THE CHURCH, ESPECIALLY THE PRECIOUS COLLABORATION HE GAVE TO THE HOLY SEE IN A PARTICULAR WAY AS THE PREFECT OF THE CONGREGATION FOR THE CLERGY AND AS PRESIDENT OF THE PONTIFICAL COMMISSION ECCLESIA DEI. I LIFT UP FERVENT PRAYERS OF SUFFRAGE THAT THE LORD, THROUGH THE INTERCESSION OF THE VIRGIN MARY, MAY RECEIVE HIM IN JOY AND ETERNAL PEACE AND I SEND THE APOSTOLIC BLESSING TO THOSE WHO SHARE IN THE SORROW FOR THE DEPARTURE OF SUCH A WORTHY SERVANT OF THE GOSPEL.

The Greek Orthodox Ecumenical Patriarch Bartholomew will visit Rome on Wednesday, 23 May.

At 6:30 in the evening, he will visit the Church of Holy Apostles to venerate the relics of Saints Philip and James.

Patriarch Bartholomew will preside a moment of prayer in the Basilica of the Holy XII Apostles at 6:30 pm, during which the relics of the Apostles Philip and James will be venerated and, at the end, he will greet the community of Friars Minor Conventual, present with the Minister General, Friar Marco Tasca, the members of the General Curia and of the Roman communities, and to all the faithful present.

“We welcome with great joy the news of the visit of His Holiness Bartholomew,” explains Brother Agia Stoia, “who has thus accepted our invitation, addressed on several occasions, to visit our Basilica where the relics of the two Apostles and martyrs are kept and venerated. A sign of great openness on the path of dialogue and ongoing brotherhood between the Catholic and Orthodox Churches, which sees Pope Francis and Patriarch Bartholomew as two untiring architects of this path.”

Moscow: The Saint with Two Names

On May 6, in the Catholic Cathedral of the Mother of God in Moscow, the diocesan process was closed for the beatification of Friedrich Josef Haass, a Catholic doctor who worked throughout his life in Russia (1780-1853). Started in 1998, the process was concluded in these days, under the presidency of Msgr. Tadeusz Kondrusiewicz before and by Msgr. Paolo Pezzi later.

His story is very suggestive for the strength of his service to the poor Muscovites, for a spirituality that united the Catholic dimension with that of Eastern spirituality, for the memory of sanctity that he left in the Orthodox Church, another piece of that ecumenism of the saints that, in spite of all resistance, marks the history of our Churches.

Born in 1780 in a middle-class family of Bad Munstereifel, near Cologne, he received from his family (five brothers and three sisters) a robust Catholic faith.

He studied literature, natural sciences and medicine in Cologne, then in Jena (where he studied Schelling), in Göttingen (he graduated in 1803) and finally in Vienna (specialization in ophthalmology).

By chance (due to a medical visit to a senior Russian dignitary) he arrived in Moscow in 1806 and built a professional career of great importance.

Honored with the cross of St. Vladimir, he worked for the care of the soldiers in the Napoleonic wars and, in 1825, he was named Stadt-Fizik, chief physician of the city of Moscow.

To be consistent with his faith (the spirituality of St. Francis de Sales) he moved ever more from service to the nobility to that of the poor and took on the Russian name of Fedor Petrovic Gaaz.

Appointed principal physician of the prisons of Moscow, he took care of many convicts being sent to Siberia.

His prisoner “chains” have remained famous. Compared to the common ones that forced the prisoners to walk all with the same step, he introduced a model that allowed individuals to walk according to an individual rhythm.

His was a strongly Catholic spirituality, inspired by the priority of mercy and love of St. Francis de Sales. Living in Moscow allowed him a vital contact with the monastic tradition and spirituality of Orthodoxy. He mentions in his writings Tichon Zadonskij, he cultivated a personal prayer in the Orthodox churches, and affirmed — against many Catholic voices — the compatibility of the two confessions. He lived his Catholicism, which protected him from every nationalism. (…)

He donated his goods to the poor and uses the funds to improve the city’s hospitals. It develops a kind of doxology that rises from praise and thanksgiving to the miseries of life and the poor. It nourishes the ethos of the people with the constant indication “rush to do good.”

Despite being German, not Russian, and Catholic, not Orthodox, on his deathbed Metropolitan Filaret referred to him as a “man of the beatitudes.”

Cause of Cardinal Beran

Prague, May 17 (CTK) – The diocesan phase of the process of beatification of Czech Cardinal Josef Beran, which started in 1998, will be completed and the documents sent to the Vatican on his death anniversary on Thursday.

Beran (1888-1969), who spent many years in internment under the communist regime, became a symbol of suppression of people over their religion, and reminded the democratic world of the hard fate of Czechoslovakia.

Cardinal Josef Beran was Prague archbishop and Czech Catholic Primate from 1946 to 1969.

He resisted the National Socialist and the Communist regimes and encouraged movements promoting civic rights and freedom of religion.

Last month, Beran’s remains were transferred to the Czech Republic in accordance with his last wish, and buried in Prague’s St Vitus Cathedral.

The process of his beatification has been underway for 20 years, which, nevertheless, is nothing unusual, as similar processes may take dozens or even hundreds of years.

Beran was appointed cardinal in 1965. He attended the Second Vatican Council of the Roman Catholic Church (1962-1965), where he demanded religious freedom for all faiths and promoted rehabilitation of John Huss, a Czech priest, thinker and church reformer who was burnt at the stake for heresy in 1415.

A well-known speech of Beran is one he gave on the Radio Vatican in January 1969 in the wake of the death of Czech student Jan Palach, who immolated himself to encourage people’s resistance against the Soviet occupation of the country.