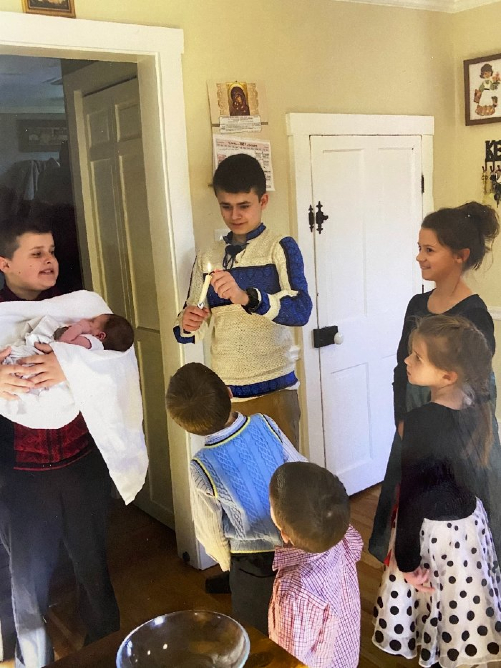 The late Max Germain is holding a lit candle for the arrival of the newest member of the Germain family, who is in this photo being held by Max’s younger brother, Christopher. Max, an altar boy at Sts. Joachim and Anna Ukrainian Greek Catholic Church in Front Royal, Virginia (link), since the founding of the parish six years ago, died on June 11, one week ago, at the age of 16 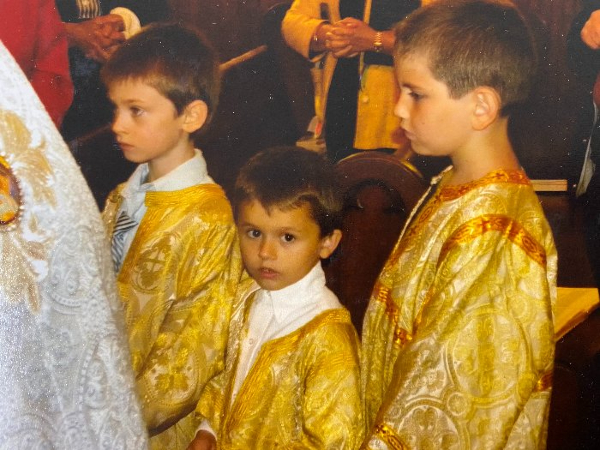 Above, Max (in the center) as a very young altar boy

“Now, O Lord, to the soul of Your servant, Max, who has fallen asleep, grant rest in a place of light, a place of verdure, and a place of tranquility, from which pain, sorrow and mourning have fled. As the good and loving God, forgive every sin of thought, word or deed he has committed.” —from the Panakhyda, or Brief Service for the Deceased, in the Byzantine (Eastern) liturgy of the Ukrainian Greek Catholic Church, sung yesterday by Metropolitan Boris Gudziak, head of the Archeparchy of Philadelphia in the United States, making him the leader of the Ukrainian Greek Catholics in the US. Gudziak spoke in Front Royal, Virginia, as part of a remembrance service for Maximilian Kolbe Germain, 16, of Stephens City, Virginia. Max had served as an altar boy since the parish’s founding six years ago. In this brief time, the parish has become, many say, the most vibrant parish in the entire Archeparchy…

I think today of the mystery of life and death, following the funeral this morning, June 18, of a young altar boy who died unexpectedly a week ago.

Max’s parents, Jonathan and Mary Germain, said to me today that they would appreciate it if, in a letter, I would mention the death of their son so that others might pray for the repose of his soul. Jonathan and Mary believe deeply in the communion of all believers, the communion of all members of the Church, all members of the body of Christ, and so they believe prayers for their son will be efficacious and helpful as Max departs this world and enters into eternity.

So please, if you can, take a moment and pray for the soul of young Max Germain.

Max lay in his simple casket in the golden vestments of an altar boy, and will be buried in those vestments, because the Christian faith and the life of the Church was central to his life and identity.

Max’s parents have brought 10 beautiful children into the world, and their family became a pillar of the new Ukrainian Greek Catholic parish of Sts. Joachim and Anna (Joachim and Anna were, of course, the parents of Mary, mother of Jesus, so the grandparents of Jesus, “the holy and righteous ancestors of God,” as the liturgy’s final blessing says).

Today, for Max’s funeral, more than 250 were present, standing room only, and the church groaned, seemingly about to burst its seams.

Thus, in the unlikely Shenandoah Valley town of Front Royal, Virginia — for in some ways the area is the beginning of the Protestant “Bible Belt” — a vibrant blossoming of Byzantine Catholic liturgical life has occurred.

And it has occurred in a place where there is also a very active Latin-rite Roman Catholic parish (St. John the Baptist, which in recent years has produced many priestly vocations), as well as active Latin-rite Catholic chapels at Christendom College, and at the world headquarters of Human Life International, and where there is also now a plan by the Society of St. Pius X (SSPX) to build a chapel dedicated solely to the Tridentine-rite Mass, the “old Mass.”

This multiplication of chapels and liturgies prompts a question: is there something in the atmosphere of this region of Virginia, where the north and south forks of the Shenandoah River intersect and become one, that sparks a certain hunger for the transcendent, a longing for “that which is above”?

It brings to mind the prediction of the American Catholic convert, Walker Percy (1916-1990, link): that the 100-mile-long Shenandoah Valley in Virginia, along with rural eastern Tennessee, would become a place of sanctuary for people of faith in a time of social turmoil and societal breakdown that Percy sensed was soon to come.

One key to this flourishing, clearly, was the fervor of the original group of parish founders — among them, David Hilt, Robert Wiesner, Ivanna Richardson, Damian Fedoryka, Jr., and Carol Little.

But a third key to this flourishing was the Germain family: Jonathan, Mary, and their 10 children, including Max.

Just by themselves, the Germains filled the entire first pew on the left hand side at the church.

Jonathan, who is a U.S. Marine, built the church’s main altar and the other two liturgical altars, the tetrapod (the table in front holding the icon of the day) and the altar of preparation, where the bread and wine are prepared before being taken to the main altar for consecration. And in his quiet leadership of his family, he has given all an example of fatherhood in this year dedicated to St. Joseph.

And Mary, with her beautiful singing voice, became the mother of all the non-singing members of the parish, teaching them how to sing the eight tones of the liturgical cycle by her example (the tones change each week). In this, her oldest child, Magdalyn, was soon her strongest assistant, adding her alto voice to the celebration of the liturgy.

Mary would sing throughout the entire liturgy, acting as cantor, her thin, clear voice ringing out fearlessly even when no one else knew what to sing, or how…

Slowly her fellow parishioners, listening to her voice, following her lead, began to sing along with her.

Eventually, the entire congregation began to sing the liturgy in a marvelous way, until observers began to say: “What is happening in Front Royal? There is no other parish in the entire Ukrainian Archeparchy where there is such active participation of lay people in the liturgy.”

So the new parish of Sts. Joachim and Anna has begun to have a certain fame throughout the United States — due in considerable part to the singing of Mary Germain. And her son Max became the head altar server, feeling, sensing, living the liturgy, assisted by his brother Christopher, handling the incense, leading the processions, carrying the cross.

A visitor from Pennsylvania came to the parish and asked about the choir. Hearing that there was no choir, his face fell, expecting only a spoken liturgy. After the liturgy, he emerged from the chapel with a glowing face and exclaimed, “Your whole parish is the choir!”

Now Mary is devastated by the loss of her oldest son, overwhelmed by a mother’s sorrow. And Jonathan, “semper fidelis,” is holding his family together while grappling with his own grief.

Please pray for her, and her husband Jonathan, and their entire family.

“We will never be able to comprehend fully the meaning of such sorrow and loss,” said Metropolitan Boris Gudziak, the Archbishop of Philadelphia for the Ukrainian Greek Catholic Church, who came to Front Royal yesterday to preside over the Panakhyda, the Brief Service for the Deceased. “But we know that Our Lord, who passed through death out of love for us, for every one of us, will never abandon us.” 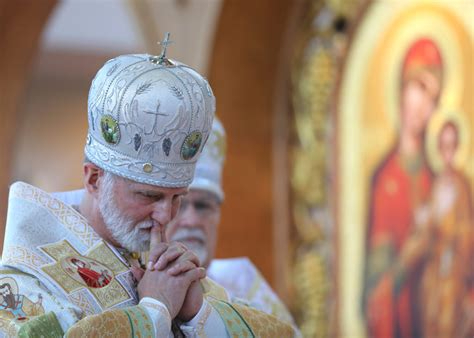 Metropolitan Boris Gudziak of Philadelphia: “Jesus came to be with us.” Gudziak sat down in the front row of the chapel next to the two grieving parents. “We will never be able to have answers to all of our ‘whys,'” he said. “But we know one thing: that He came to be near to us in such times. Here is here with us now as I sit in this pew.” 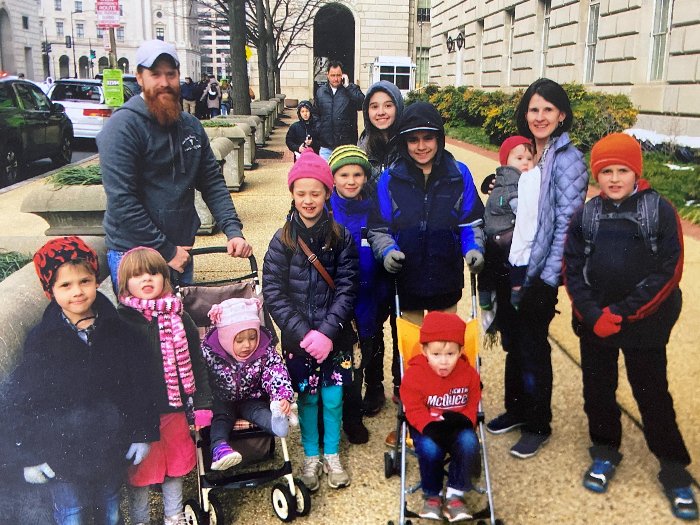 The Germain family on an outing. Max is pushing the stroller.

“May eternal light shine upon him, and may he rest in peace.” 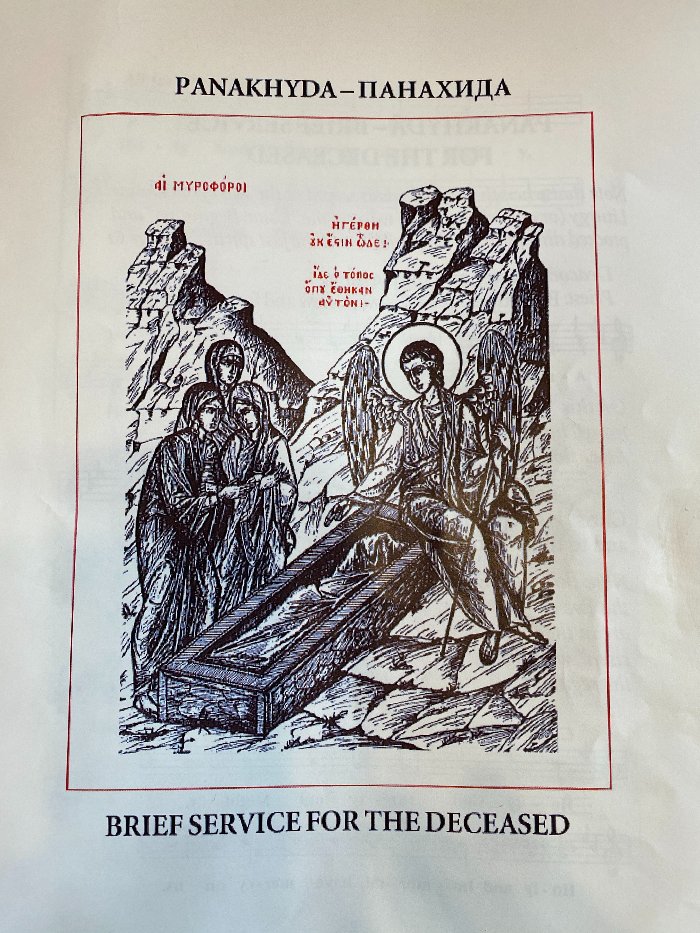