Note: Please consider taking out a gift subscription to our print magazine, Inside the Vatican, this Christmas. It is a gift that “keeps on giving” all year long… Send an email to us, and we will bill you, or call 1-800-789-9494 in the US to order immediately. Right now through Christmas, we have a special offer: 1 subscription for $30, 2 for $50 and 3 for $65.

The appointment had been rumored for weeks, but now it has been confirmed.

Gänswein (shown below with Pope Benedict) will replace American Cardinal James Harvey, who had been Prefect for 14 years, since February, 1998, and has just been named the Archpriest of St. Paul’s Outside the Walls, one of the principal basilicas of Rome. 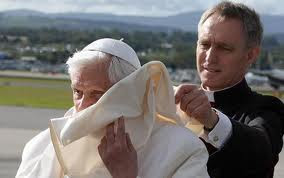 At the same time, Gänswein will continue to be the Pope’s personal secretary.

This appointment is unprecedented in recent Vatican history. 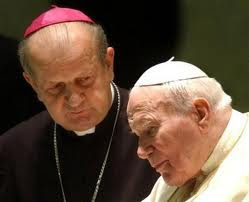 Pope John Paul II did something similar in the late 1990s, naming his personal secretary at that time, Father (now Cardinal Archbishop of Cracow, Poland) Stanislaw Dziwisz, a bishop and, on February 7, 1998, making him at the same time the “adjunct Prefect” of the Papal Household alongside the new Prefect at the time, Harvey.

But Gänswein will not be an “adjunct Prefect,” he will be the actual Prefect.

This means that the Pope is entrusting Gänswein with complete control of the Prefecture of the Papal Household, the office which oversees access to papal audiences, and all meetings with the Pope himself.

One leading Vaticanist, Andrea Tornielli, described on Friday the significance of this decision in this way: “At the beginning of Benedict XVI’s pontificate, very few would have expected Benedict XVI to make such a choice given the criticisms against his predecessor,” Tornielli wrote. “But today’s appointment should be seen in the context of the Vatileaks scandal — the theft and publication of confidential documents from the Pope’s desk. By appointing his secretary an archbishop and giving him a tough task within the Curia’s organizational chart, the Pope has created a protective shield around his collaborator for the future. He has also strengthened him significantly by making him the main interface in Pope-Curia relations and with the outside world.”

There are several little mysteries concealed in this paragraph. What were the criticisms against Benedict’s “predecessor” (Pope John Paul II) when he decided to make Dziwisz the adjunct Prefect? And what is the “protective shield” that the Pope is building around Gänswein? And why is it thought necessary to build such a “shield”?

The criticisms against John Paul’s decision were mainly two: (1) that Dziwisz had been give too much power, and (2) that his exercise of that power was sometimes “idiosyncratic” (“idiosyncratic” means “a structural or behavioral characteristic peculiar to an individual or group”; so, in this case, that Dziwisz had a very personal vision of how to carry out his duties). How so? It was said that Dziwisz’s personal worldview, shaped by his experience in Communist Poland, caused him (as is normal, of course) to look at things from his own, Polish perspective. This caused friction when it did not coincide with the perspective of others in the Roman Curia, and throughout the Universal Church.

Then, what does Tornielli mean by saying that the Pope, in doing this, has created a “protective shield around his collaborator for the future”?

He means, it would seem (and this is a deduction based on simple logic, not on any special knowledge of, or insight into, the situation in the Curia) that Gänswein has critics, even enemies, in the Curia, and in the Church hierarchy. If there were no such critics or enemies, there would be no need for the Pope to think of “protecting” or “shielding” him, as Tornielli says he is doing. 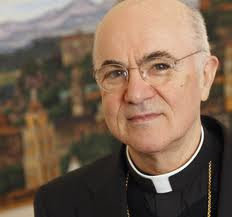 It is said in Rome that Gänswein, in staunchly protecting the time and energy of the Pope — which is, after all, his duty — has irritated many important cardinals and bishops, both in the Curia and around the world.

It is also alleged that this has prevented the Pope from being informed about certain important matters, especially financial and administrative matters — like the cases of corruption alleged by Archbishop Carlo Maria Viganò (photo), who was then posted to the United States where he is now the nuncio.

However, in keeping Gänswein by his side, the Pope seems clearly to be saying that he does not accept this interpretation of events.

Why is it necessary to construct such a “shield”? Well, evidently, for two principal reasons: (1) to make attacks against Gänswein’s authority less effective; and (2) to ensure Gänswein’s future, even in the absence of the Pope he now serves.

In this sense, this decision has just a hint of being an “end of pontificate” decision. Not that Pope Benedict’s departure is imminent; that would clearly be an exaggeration. But that Pope Benedict has acted now, decisively, in 2012, before his departure becomes imminent, to place Gänswein in a position of relative safety, no matter who succeeds him.

There is another peculiarity about this decision.

In a Church in which the hierarchical order has been, and remains, of central theological significance, a simple priest or monsignor has a lower place than a bishop, or a cardinal (unless the cardinal is not a bishop). In matters of worship, of decision-making, of day-to-day tasks, a bishop has greater authority than a monsignor — even a monsignor who is the Pope’s secretary.

To resolve that lack of authority, it might seem to make sense to raise the monsignor secretary to a higher dignity, that of bishop secretary.

But something in that epithet offends Catholic sensibilities.

The peculiarity of this situation is that a secretary to a bishop — in this case, as in the case of Dziwisz under John Paul II, the secretary to the Bishop of Rome, the papal secretary — ought not, usually, himself be a bishop.

That did not happen in this case. Gänswein will be raised the dignity of the episcopate, but he will remain the Pope’s secretary.

However, it can be argued (I suppose), that if anyone in the Church ought to have a bishop as his secretary, it is the Bishop of Rome — the Pope.

The present situation seems to be one of transition: the Pope has decided that he does in fact wish to promote Gänswein now to the episcopacy (in order to reward him, and also in order to protect him) while at the same time he wishes to keep him by his side for some time yet, so he has decided to give him a truly episcopal post — Prefect of the Pontifical Househald — while at the same time keeping him very close to him as his personal secretary.

In this, the esteem of the Pope for Gänswein, and his concern for the man who has been at his side for more than 15 years, could not be clearer.

Gänswein was born in Waldshut, in the Black Forest, on July 30, 1956, making him 56 year old. He is the eldest of five siblings (two brothers and two sisters).

He was ordained a priest of the diocese of Freiburg im Breisgau on May 31, 1984. He graduated with a degree in Canon Law in 1993 from the Faculty of Theology at the Ludwig-Maximilians-Universität in Munich. After working as a judge in the Diocesan Court, in 1995 he came to Rome to work in the Congregation for Divine Worship. (In those years, I would occasionally encounter him as he walked back and forth from the Vatican on the via delle Mura Aurelie, where we have our editorial offices and where he had his residence in the German Mater Dei building.)

He was transferred to the Congregation for the Doctrine of the Faith in 1996, first working as an official in the Congregation, then, in 2003, becoming personal secretary to the then-Prefect Joseph Ratzinger, replacing Monsignor (now Bishop) Josef Clemens, who had been Ratzinger’s secretary since the early 1980s.

Gänswein is passionate about sport, an excellent skier and a strong tennis player.

Recently, when presented with an award in the Vatican, Gänswein explained his own understanding of role this way:

“I need to let the sunlight in, and the less the pane of glass is visible the better; if it cannot be seen at all it means it is fulfilling its task,” Gänswein added. “The less I am deliberately on show the better.”

When asked about tensions in the life of the Roman Curia, Gänswein said: “Hostilities do exist, and if they affect the Holy Father, then they sometimes affect his secretary too. Suffering is part of the Via Crucis, but we do not choose it.”

Gänswein will be given the titular see of Urbisaglia (a city which once existed in the Marches in central Italy) and will be consecrated an archbishop on January 6 by Pope Benedict XVI himself, in a celebration that may also include Monsignor Fortunatus Nwachukwu, Chief of Protocol of the Secretary of State and recently named the new Apostolic Nuncio to Nicaragua. 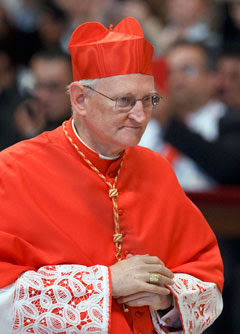 During the recent “courtesy visits” to greet the new cardinals named by Pope Benedict on November 24, Gänswein and Nwachukwu walked together to greet the newly-created Cardinal Harvey (photo above), predecessor of Gänswein as Prefect of the Pontifical Household, now Archpriest of the Basilica of St. Paul Outside the Walls. 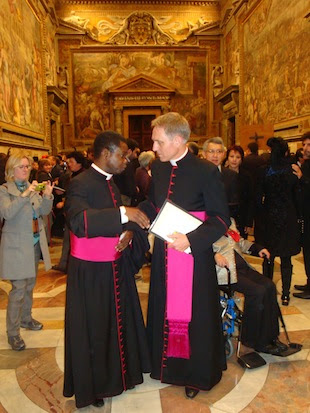 The appointment in August of Father Leonardo Sapienza (shown below with Pope Benedict) to be Regent of the Pontifical Household — a type of “Number 2” after the Prefect — means that Sapienza has experience in the day-to-day activities of the Household, and it is expected that he will carry out many of the day-to-day operations beneath the new Prefect, Gänswein. Sapienza has not been promoted to become a bishop. (It is Sapienza, now under the direction of Gänswein, who will decide who will be able to be near the Pope, or greeted by the Pope, at papal audiences.) 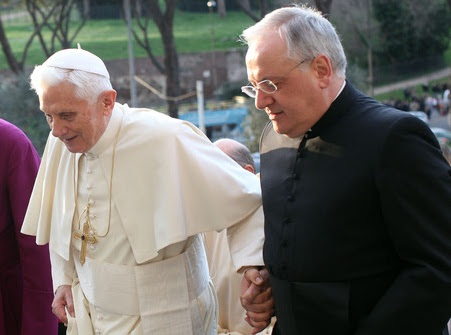 In addition to his native German, Gänswein speaks excellent Italian, French, English, Spanish and is an accomplished Latinist.