“Attempting, as one inevitably does on contemplating the lilies of Ganina Yama, to imagine the true events of that violent and chaotic night in July 1918, it is those inescapably romantic, evocative images of the Imperial Family that inevitably twist and turn into view. No matter how hard one tries to resist, they nag at one’s consciousness… a boy in a sailor suit… girls in white dresses… untainted, murdered children… a devoted family destroyed… all of them forever young, forever innocent and, as they all so fervently wished for in the many prayers, ‘At Rest with the Saints.’”—The concluding lines of Helen Rappaport’s The Last Days of the Romanovs: Tragedy at Ekaterinburg (2009) (link) 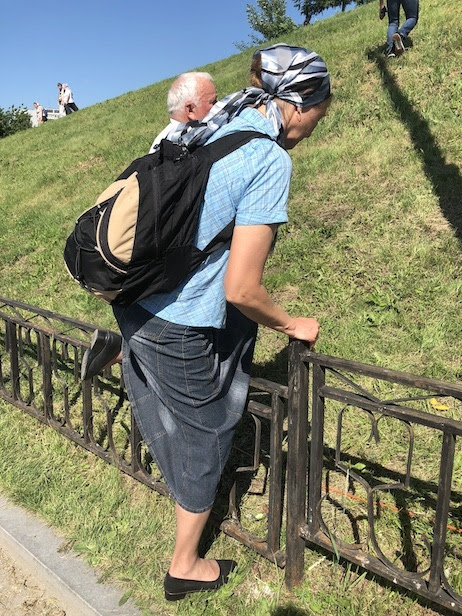 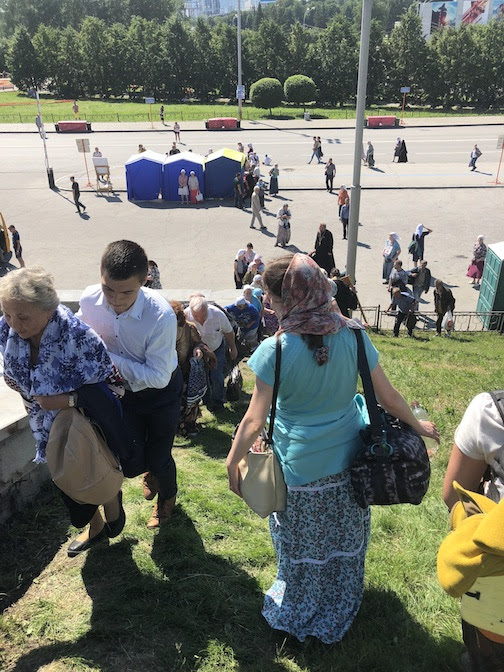 Last night more that 75,000 people gathered in the street below the Church on the Blood in Ekaterinburg, Russia, to attend a divine liturgy in commemoration of the 100th anniversary of the death of the Romanovs, which occurred just after 2 a.m. on July 17, 1918.

The “Church on the Blood” is so-called because it is built on the site of the house where the Romanovs were held as prisoners during the last weeks of their lives, and it includes the area of the very basement room where they were executed at about 2 a.m. on July 17, 1918, hence “on the blood.”

(Here is a view of the crowd at about midnight at the start of the liturgy; the church is to the right, out of the photo) 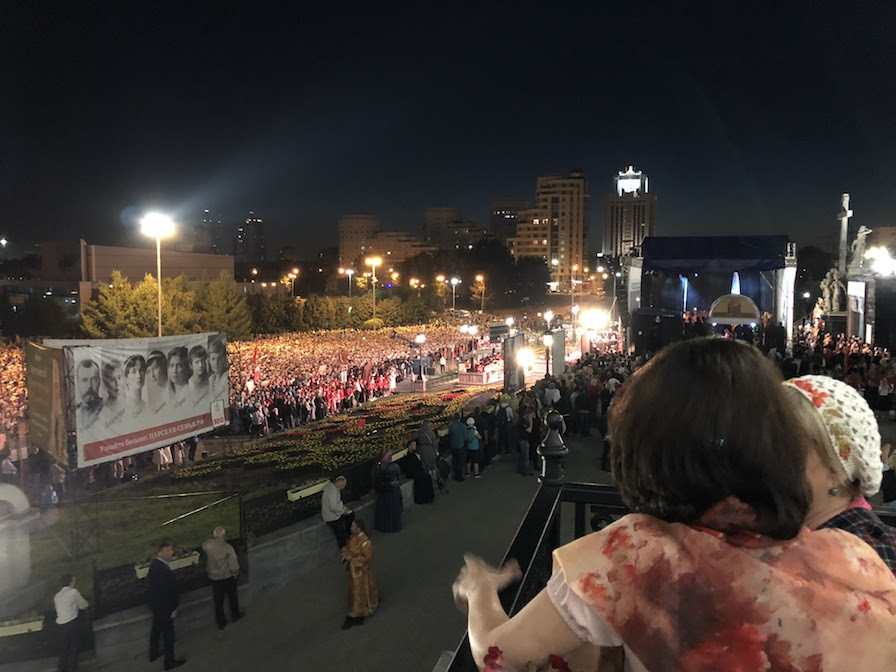 The liturgy began at midnight and ended at about 2:30 a.m.

The bells of the church tolled when the liturgy ended, at almost the exact moment in the night when the shots that killed the family rang out 100 years ago.

The principal celebrant was the Patriarch of Moscow, the head of the Russian Orthodox Church, Kirill.

With him were many of his bishops, as the the Holy Synod, the highest authority of the Church, had been meeting in Ekaterinburg over the weekend.

The night air was cool, the sky clear, and there was an occasional light breeze — a perfect evening.

The vast crowd stood, rank upon rank, 75,000 strong, for the entire two and a half hours.

(Another view of the crowd) 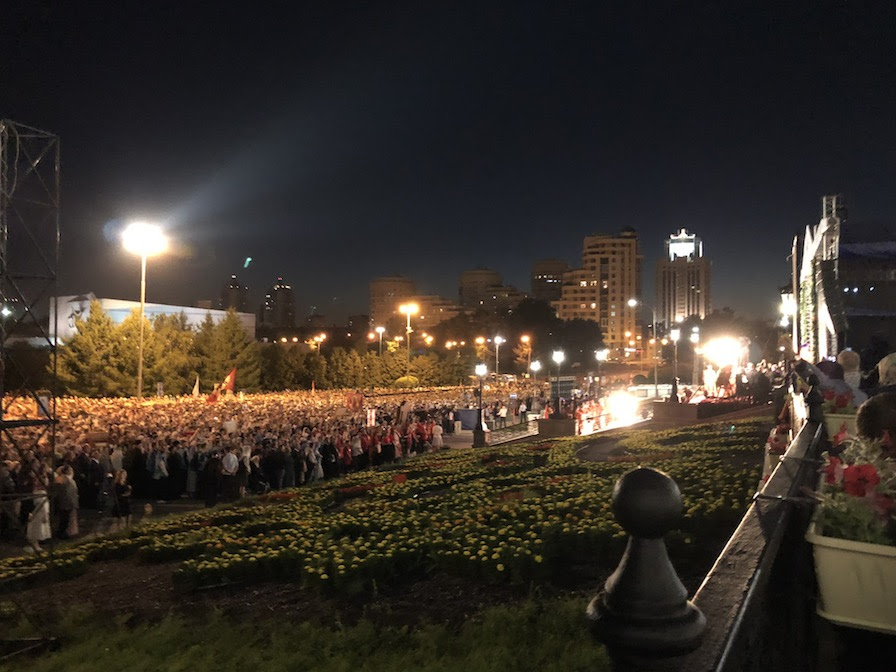 And then, when the liturgy was finished, following Kirill himself, who took the lead with many of his fellow bishops, all of striding vigorously, at a rapid pace, the crowd, singing hymns to Christ, began to walk.

It was an extraordinary sight. 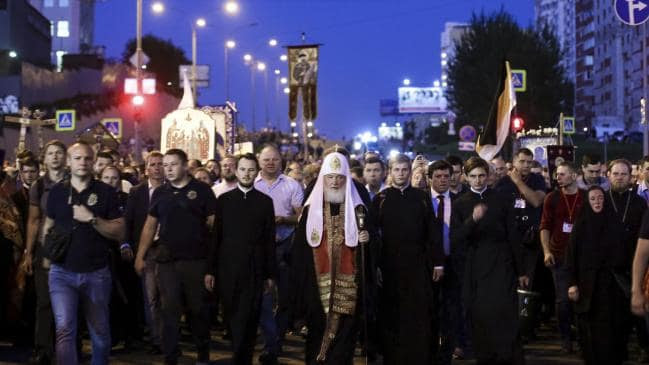 The people filled the entire width of the large street, perhaps 30 abreast, maybe more, and they all walked briskly, like a vast river of humanity.

(Here is a photo from Getty Images) 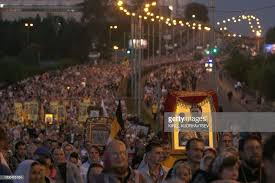 It took more than half an hour for all the walkers to pass by, followed by police cars and ambulances to offer help to any who could not continue.

But it was the singing that was most striking.

Even though walking at a very fast pace, perhaps at 13 or 14 minutes per mile, or so it seemed to me, the walkers sang.

Their voices floated over the air without loudspeakers, one group singing a hymn, another a prayer, or snippets from a prayer, then another group, and another, and another.

It was a singing river of humanity, moving swiftly just as the first shimmering light of dawn began to soften the blackness of the horizon.

For nearly four hours they walked, until they had completed their 13-mile pilgrimage.

The route they followed was the exact route that the dead bodies of the Czar and his wife and children, lying dead in a cart, followed on the morning of July 17, 1918, until the cart stopped and they were thrown into a mine shaft, their first burial place. Later, the bodies were moved a couple of kilometers away to what the executioners thought might be a more hidden burial place.

The first walkers arrived at the place of the mine shaft, Ganina Yama, 13 miles from Ekaterinburg, at about 6:30 a.m.

The Patriarch walked the entire way, as did many of his bishops, including Metropolitan Hilarion Alfeyev.

When he reached Ganina Yama, where the bodies of the Romanovs were tossed onto the ground, the Patriarch spoke a few words, echoing what he had said during the day on July 16, before the liturgy and walk.

This is what Kirill had to say to the press in Ekaterinburg on the 16th, Interfax reported:

Yekaterinburg, July 16, Interfax — Patriarch Kirill of Moscow and All Russia said he hopes that the memory of the tragic death of the imperial family will help rethink history and unite the people.

“I would like to express hopes that the memories of these tragic events will help those who have not been able to rethink history yet do it. So that this rethinking leads to an increase of our common accord, national accord and reconciliation,” Patriarch Kirill told reporters in Yekaterinburg.

He also said he hopes that the historical tragedies “we have inherited from the past will not divide our people.”

“It is with a special feeling that I step on the Yekaterinburg land on the 150th anniversary of the birth of Emperor Nicholas II and the anniversary of his martyrdom. Because this is where his life on this earth ended…”

And Agence France-Presse reported on the walk in these words:

Russian Orthodox Patriarch Kirill led some 100,000 people in a nighttime procession Tuesday to mark 100 years since the Bolsheviks murdered tsar Nicholas II and his family, amid a simmering conflict between the state and the Church over their remains.

The procession began in the early hours of Tuesday from the murder site in the Urals city of Yekaterinburg to a monastery commemorating the slain Tsar, his German-born wife and five children, regional authorities said.

Many of the fervent believers came from across Russia and abroad to take part in the colourful ceremony during which many carried icons.

Another 20,000 people joined the commemorations when the procession arrived at the monastery in Ganina Yama after covering the distance of 21 kilometres (13 miles), regional authorities said.

The monastery was built at one of the sites where the burnt bodies of the last Russian tsar and his family were taken after their execution in the aftermath of the 1917 Bolshevik Revolution, although they were later moved.

The Bolsheviks shot the abdicated tsar, his wife and their five children along with their servants and doctor on the night of July 16 to 17, 1918 as they were living under guard in the Urals city of Sverdlovsk, now Yekaterinburg.

Addressing the pilgrims, Patriarch Kirill said Russia should draw lessons “from this difficult and bitter experience.”

“We truly should have lasting immunity against any ideas and any leaders who call on us to embrace some new, unknown happy future through the destruction of our life, our traditions and our faith,” the 71-year-old powerful Church leader said…

And so in these hours the Romanovs have been remembered — by a solemn liturgy, and by a solemn procession of 13 miles by nearly 100,000 people, all walking for hours in the night until dawn, and after dawn, many singing.

The place of the execution of the Romanovs is thus, a bit surprisingly, being transformed into a place of rebirth and renewal, of gathering, of study, of worship, of culture, of art, of faith.

Was what happened to the Romanov family just senseless cruelty?

Was it without any meaning?

In these days and hours, their suffering seems to have acquired a certain new meaning.

Their sorrow and tragedy are now bringing forth a deeper Logos-centric, Christ-centric spirituality in their country and in the world, through which there may be a healing of wounds lingering from the past…

P.S. If you have any interest in joining one of our upcoming pilgrimages, we have information packets on pilgrimages later this year, and in 2019 and 2020. The pilgrimages visit:

(2) The Italy of St. Benedict, St. Francis, St. Clare, St. Rita of Cascia, St. Catherine of Siena, and other saints

(4) Germany in the Footsteps of Emeritus Pope Benedict XVI

(5) Russia: In Search of the Spiritual Renewal of Post-Soviet Russia

(6) Ireland: In Search of the Emerald Isle’s Past, and Future

(Write to us by return email, or via this email. Please note any particular interest; please include your phone number if you would like us to call you to discuss various pilgrimage packages.)