Update on Burke-Bannon: The Article that Disappeared

Yesterday American Cardinal Raymond Burke issued a tough statement (full text below) announcing he was severing immediately his relationship with the Dignitatis Humanae Institute (of which he was the honorary president).

He did so, he said, because American political activist Steve Bannon — a supporter of the Dignitatis Humanae Institute — had indicated in a LifeSiteNews report that quickly disappeared from the web (here is a linkto the original report, but it now leads nowhere) that Bannon was in negotiations to make a film about homosexuality in the Vatican in collaboration with the openly homosexual French writer Frederic Martel, who had published a book in February entitled In the Closet of the Vatican. In that book, Martel alleges that a majority of the officials in the Vatican are homosexuals. Bannon, in the missing report, said he had met with Martel to discuss purchasing the rights to a screen version of the book.

I have now found a preserved copy of that “disappeared” report, on another website (link). For the sake of documentation, I reprint it here below. 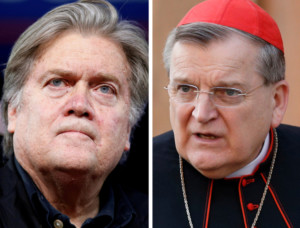 Above, American political activist Steve Bannon (left) and American Cardinal Raymond Burke (right), and a screen shot of the now “disappeared” June 24 article which led to their abrupt split yesterday….

Here above is a screen shot and here below is the complete text of the now disappeared report, originally posted Monday, June 24, at 2:42 p.m., Eastern Standard Time, on the LifeSiteNews website, and taken down not long after, which caused the split between Cardinal Burke and Bannon (link):

June 24, 2019 (LifeSiteNews) — Steve Bannon, former adviser to President Trump and an award-winning documentary filmmaker, said that people will only understand the scale of the problem of the infiltration of homosexuality into the Vatican if they see it on the big screen.

Bannon, the former White House Chief Strategist to President Trump and CEO of his 2016 presidential election campaign, met last month with French sociologist and homosexual activist Dr. Frédéric Martel, author of In the Closet of the Vatican, where they discussed teaming up to make such a film.

During the May 19 meeting, which took place in Paris, Bannon praised Martel’s recently published book which offers evidence for the widescale presence of active homosexuals among the hierarchy.

“It is the book of the year,” Bannon related to LifeSiteNews about the conversation he had with Martel. Bannon said that he has read the book twice and finds it both extremely powerful and completely damning of the Church hierarchy. Bannon said that his own independent sources in the Vatican verified many of Martel’s claims, including that the vast majority of clergy in the Vatican are homosexual, even adding, “I was told it is not 80 percent, it is closer to 90 percent.”

“In the Closet of the Vatican must be read to understand the magnitude and the depth of the problem,” said Bannon. The documentary filmmaker said that he stressed during the meeting the importance of making the book into a film.

“People will only understand the scale of this problem if they actually see it,” he told LifeSiteNews. There was talk about buying film rights to the book.

According to Martel, Bannon also agrees with the author’s “main hypothesis and conclusions, knowing already that the gay issue is the key element of understanding of the Vatican,” in Martel’s words. Although Bannon disagrees, Martel thinks the Church should de-emphasize her teachings on chastity, marriage, and homosexuality.

They do agree, however, on the fact that the Church has bigger priorities right now. “The Church lost all credibility on moral teachings on sexuality because of the sexual abuse crisis. It has to move on to more important issues,” according to Martel.

For Bannon, that focus is on a strictly enforced zero tolerance policy and the importance of holding the clergy accountable. “The Church must commit to zero tolerance, total transparency, and total accountability — in that order,” he told LifeSiteNews.

After several lengthy telephone conversations, Bannon and Martel met in person on May 19 in Paris, at the five-star Bristol Paris Hotel, upon Mr. Bannon’s initiative. The meeting was organized with the help of Benjamin Harnwell, who works with both Bannon and Raymond Cardinal Burke, according to a small May 30, 2019 report on this meeting in the French magazine Valeurs Actuelles. The magazine also reported that “according to the author of Sodoma [Martel], the man behind the victory of Trump shared his diagnosis: for the sake of the survival of the Church, the Church should consider heterosexual marriage for priests.”

“The Church is, we agree on that also, at an existential crisis,” Martel told LifeSiteNews. He thinks “if the majority of bishops are either homophile or gay, there are no solutions to change the Church without changing profoundly her doctrine on celibacy, chastity and marriage.” While Bannon and Martel disagree on homosexuality issues, they agree that “the double life, scandals, abuses will go on and on forever if they are not addressed now.”

Bannon told LifeSite that “you can’t have the parishioners, the little guys who are barely scraping by, donating to support this lifestyle, which, according to Martel’s book, is completely out of control.”

Both Steve Bannon and Dr. Martel verified the accuracy of this report prior to publication.

[end text of the “disappeared” article]

I have been made aware of a June 24th LifeSiteNews online article — now removed — entitled “Steve Bannon hints at making film exposing homosexuality in Vatican,” in which the insinuation is made that somehow, though my association with Mr. Benjamin Harnwell of the Dignitatis Humanae Institute, I was involved in a meeting between Mr. Bannon and Mr. Frederic Martel, author of the book, In the Closet of the Vatican, to promote a film version of Mr. Martel’s book. LifeSiteNews made no contact with me to verify my possible involvement. Given the overall content of the article and given several statements made by Mr. Bannon in the article, I must make the following clear:

I do not, in any way, agree with Mr. Bannon’s assessment of the book in question. Furthermore, I am not at all of the mind that the book should be made into a film. I disagree completely with a number of Mr. Bannon’s statements regarding the doctrine and discipline of the Roman Catholic Church [note: Burke here is referring to statements about priestly celibacy]. Above all, I find objectionable his statement calling into question the Church’s discipline of perpetual continence for the clergy, in accord with the example and desire of Christ, Head and Shepherd of the Church.

I have never worked with Mr. Bannon in his organization and am not presently doing so. I have met with him on occasion to discuss Catholic social teaching regarding certain political questions, but I have no part in his organization. In meeting with him, as in meeting with other political leaders, I have tried to fulfill my mission as a priest to teach the faith and morals for the common good.

I have been involved with the Dignitatis Humanae Institute for some years because of its work to support Christians in public life who act with respect for the moral law and, therefore, promote the common good. Some weeks ago, I was named the Honorary President of the Institute. In recent time, the Institute has become more and more identified with the political program of Mr. Bannon. While I have urged the Institute to return to its original purpose, it has not done so, as is evident in its involvement with this latest initiative of Mr. Bannon. I have, therefore, effective immediately, terminated any relationship with the Dignitatis Humanae Institute.”

I wrote to Bannon to ask if there was an error in the article, and received a response from his assistant, Alexandra Preate who told me that Bannon asked for the LifeSiteNews article to be taken down.

Here is her statement:

“While the book is controversial and Mr. Bannon does not agree with all parts, he believes there is an overwhelming argument in the book of homosexual infiltration of Vatican hierarchy. Mr. Bannon and Dr. Martel diverge on the solutions. Mr. Bannon believes this needs to be brought out into the open and confronted. The laity need to have a role in holding the clergy accountable, especially in light of the current abuse crisis the Church is facing. Mr. Bannon does not believe his allies in the Vatican are gay. The focus of the meetings was going through aspects of the book and discussing Steve’s buying the film rights.”

So that is where this story stands for now…

Below (after an advertisement for a new book I have published — please consider ordering a copy), I include once again an image of Cardinal Burke’s statement on the matter. Also, at the very end of this letter is a little note with a link for those who might wish to support the writing of these letters. 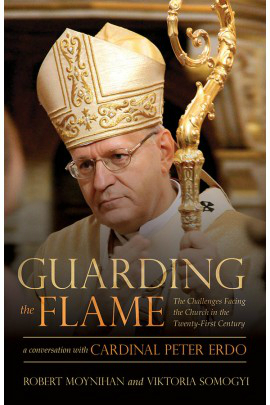 Guarding the Flame: A Conversation with Cardinal Peter Erdo

A book containing several days of interviews I conducted with Cardinal Peter Erdo of Hungary has just been published by TAN (Thomas A. Nelson) Books, which specializes in the important work of reprinting traditional Catholic works now out of print. To purchase a copy of my new book with Cardinal Erdo, you may do one of three things:

(3) Write back to me by return email, including a complete mailing address and phone number, tell me how many copies you would like, and I will send you one or more signed copies at the cover price of $27.95, plus shipping and handling (about $5 inside the US, but considerably more, up to $26 or more, outside of the US).—RM 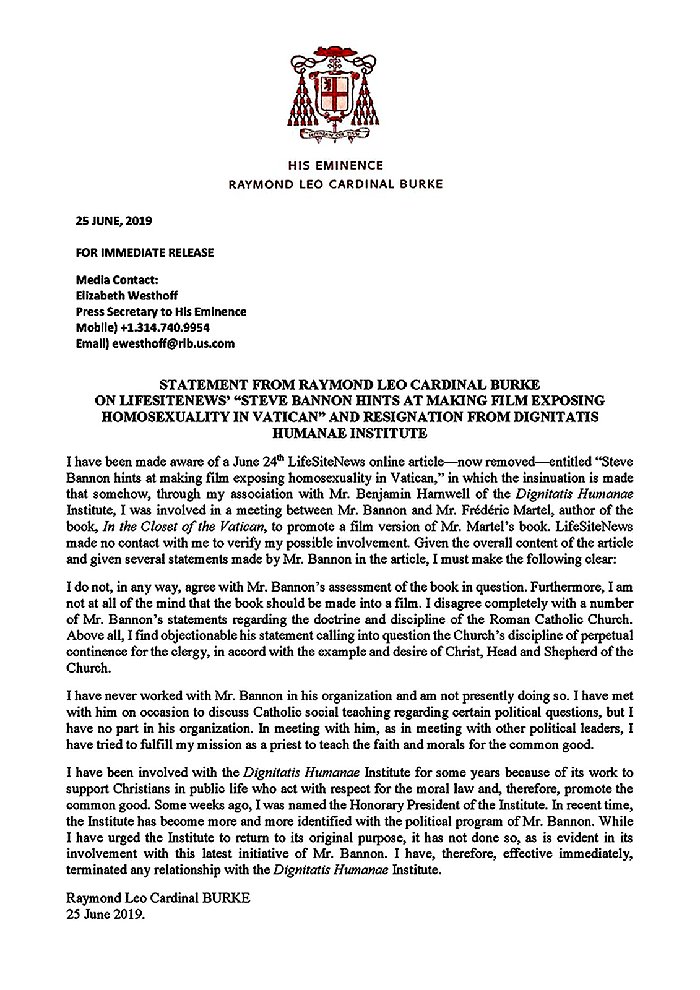