As rain fell in St Peter’s Square, a solemn High Mass according to the old rite was celebrated this morning in Latin in St. Peter’s Basilica by American Archbishop Raymond Burke. After Mass, the sun came out over the Square, in a blue sky. Photos…

By Robert Moynihan, reporting from Rome

The Mass in St. Peter’s 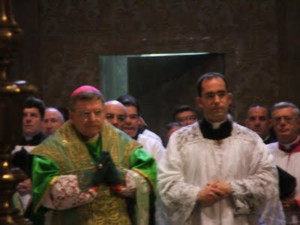 Archbishop Raymond Burke (photo above) made history in Rome this morning. 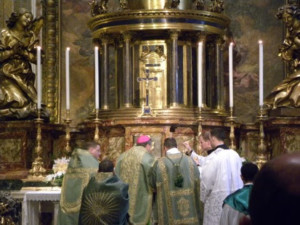 Burke, formerly Bishop of La Crosse, Wisconsin, and Archbishop of St. Louis, Missouri, now the head of the Apostolic Signature of the Holy See, celebrated a solemn High Mass according to the old rite at 9:45 this morning in the Chapel of the Most Holy Sacrament in St. Peter’s Basilica (photo by Angela Ambrogetti, who writes for Inside the Vatican and who attended the Mass).

The Apostolic Signature is an office more or less comparable to the “Supreme Court” of the Catholic Church. The head of this office is, according to Church custom, a cardinal. This means that, barring some change, Burke should relatively soon be made a cardinal. The decision of a probable future cardinal to celebrate this Mass gives the event a certain weight and seriousness it might not otherwise have had. 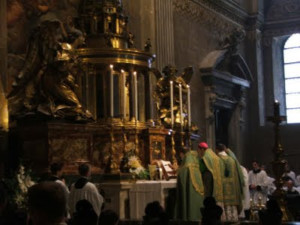 It was the first time a solemn High Mass according to the old rite has been celebrated in St. Peter’s Basilica since 1969, 40 years ago.

Many low old rite Masses have been celebrated in different chapels of the basilica over the years, especially in the past two years since the promulgation on July 7, 2007, of Summorum Pontificum, Pope Benedict’s motu proprio calling for wider celebration of the old Mass.

But this was the first High Mass in the old rite.

Monsignor Guido Pozzo, recently appointed by Pope Benedict to head the Ecclesia Dei Commission within the Congregation for the Doctrine of the Faith — the commission in charge of dialogue with the Society of St. Pius X, which wishes to celebrate the Mass only in the old rite — was also present.

Burke, dressed in green vestments with gold braid, was flanked by about 70 priests who joined him in procession across the main nave of the Basilica before and after the Mass. 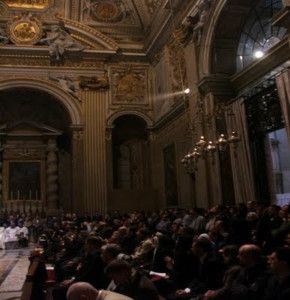 The chapel was filled to overflowing. I estimated about 400 people in attendance, packed like sardines into the chapel until there was standing room only (I stood in the back on the right side, a little to the right of the center of this photo).

This led some present to express a certain frustration that the chapel chosen for the Mass was so small.

An organ on the balcony above and a male and female choir accompanied the ceremony. (See photo of the choir of sisters below.)

After the Mass, when Pope Benedict prayed his noon Angelus from his window above St. Peter’s Square, he did not make any direct mention of the Mass.

However, he did greet warmly those in the Square “after attending a conference in Rome on Summorum Pontificum” — a reference to the people who had just marked the close of their conference by the celebration of the Mass in the old rite. 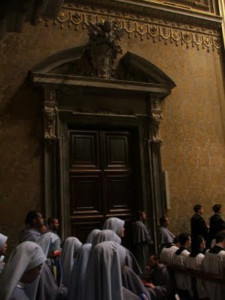 This might be considered a “glancing reference” to the Mass, but there was no direct reference whatsoever.

I will reflect further on the Mass itself, and on Archbishop Burke’s homily, in an upcoming newsflash.

For now, I think these photos from today’s historic Mass give a good general idea of what occurred. (Some of these photos are drawn from the intersting Italian website, http://blog.messainlatino.it/2009/10/solenne-pontificale-san-pietro-con.html)