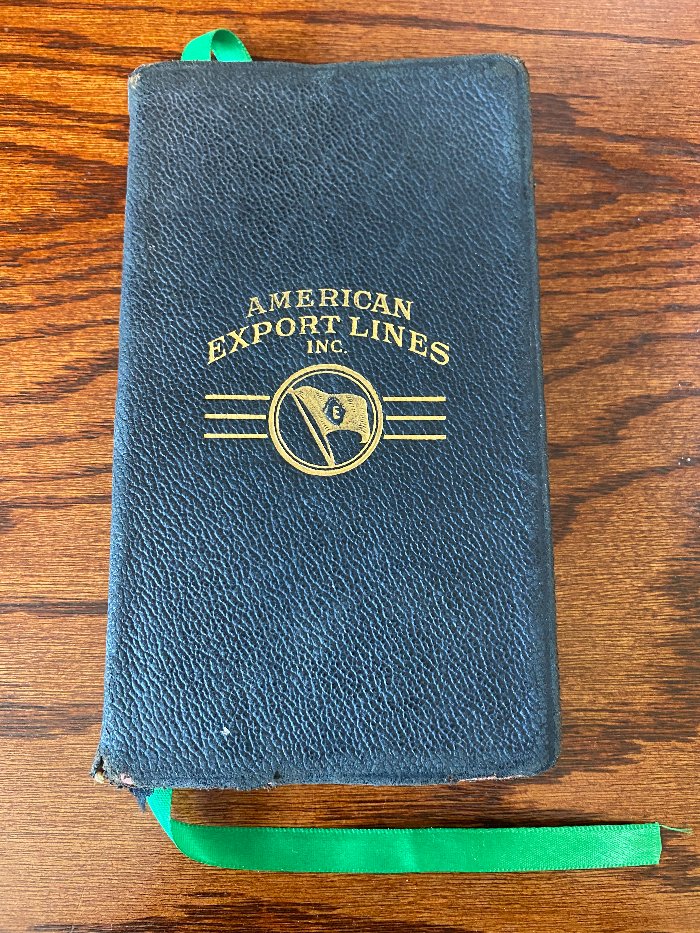 Above, the cover of my late father’s journal from 1943, when he entered the Franciscan seminary at Callicoon, New York, at the age of 17. My sister found the journal and gave it to me this past weekend 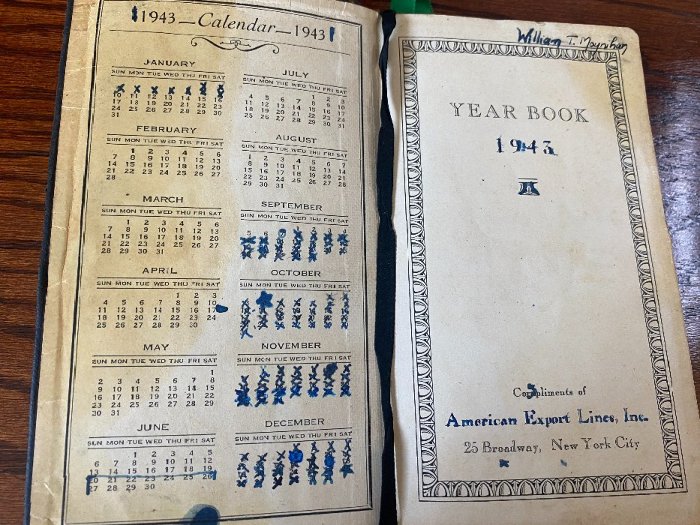 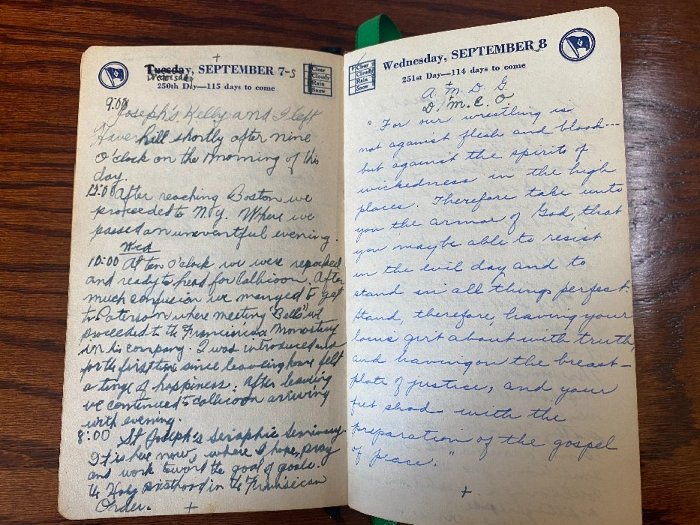 Above left, the contents page of my father’s 1943 journal.  Above right, the page of the journal from September 7 and 8, 1943, when my father was traveling from his home in Haverhill, Massachusetts, to the Franciscan minor seminary in Callicoon, New York, near St. Bonaventure University on the shores of Lake Erie in western New York state.

There the winters are bitterly cold. A constant in the journal is how the blankets on the cots in the seminarians’ dormitory were too thin to keep them warm. “How cold it was,” he writes, when the young men each morning were all awakened by a bell to rise and attend morning Mass in what we now call the “old rite,” but which in those days was simply the ordinary rite of the Church.

Below, a view of the seminary 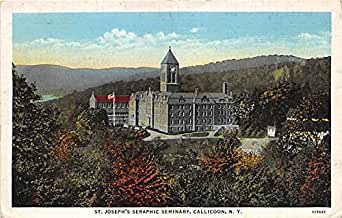 “He who was the Son of God became the Son of man, that man… might become the son of God.” —St. Irenaeus of Lyons, writing in about 180 A.D. in Lyons, France, toward the end of the “silver age” of the Roman Empire, which would utterly collapse 200 years later, in the late 400s

“The glory of God is man alive. But the life of man is the vision of God.” —St. Irenaeus of Lyons

“I belong to God”

What is a vocation?

What is a calling? Who is the caller, and who hears the call?

And how does this relate to the various deep crises of our time?

Sometimes we think we know our parents, but often we do not really know them well at all.

I had known my father, William Moynihan, all my life, and had heard from him the stories of his youth.

But only this past weekend, more than a year after his death at the age of 93 on March 28, 2020, did I come into possession of his seminary diary (photos above).

It was written by hand when he was 17, in the autumn of 1943, when he went to discern his vocation at the St. Joseph Seraphic Seminary of the Franciscans in Callicoon, New York, just as his older and closest brother, Robert, age 19, was entering the U.S. Marine Corps and shipping out to the Pacific to see two years of combat as a gunner on the U.S.S. Hornet.

Through this diary, as through a glass darkly, I caught a glimpse of a man I had never known — a young man in search of his life’s mission and meaning who spoke in a young man’s voice and with a young man’s heart.

So the diary allowed me a new insight into my father’s mind and soul, and therefore, into my own.

I thought it might be of interest to some of the “old-timers” among my readers, to reproduce just a few lines from this journal, which do not invade my father’s privacy, but which nevertheless provide a glimpse into the soul of a young man who began the journey that many thousands began in those years, and to offer some reflections of my own.

My father’s journal entries begin with an account of his departure from his family home in Massachusetts and his journey by train to the Franciscan minor seminary in western New York, near Lake Erie:

9:00 — Joseph Kelly and I left Haverhill shortly after nine o’clock on the morning of this day.

12:00 — After reaching Boston we proceeded to New York where we passed an uneventful evening.

10:00 — At ten o’clock we were repacked and ready to head for Callicoon. After much confusion we managed to get to Paterson where, meeting “Bells,” we proceeded to the Franciscan Monastery in his company. I was introduced, and for the first time since leaving home felt a tinge of happiness. After leaving we continued to Callicoon arriving with evening.

8:00 — St. Joseph’s Seraphic Seminary. It is here now where I hope, pray and work toward the goal of goals: the Holy Priesthood in the Franciscan Order.

I don’t know of anything special that happened today except in my mind, which is always trying to decide which course I should take, good or bad.

I am now working on a new theory to combat the evil tendencies of my sinful nature: “I belong to God.” That’s all there is to it. My mind, body, thoughts and my all should be at His disposal day or night… My God and My All.

Today I am really in a quandary about everything. I don’t know how to take life but I am sure of one thing, I am going to stay here. I reasoned that anyone can go but only a lover of Christ can stay… I pray every night from now on that by my love of Almighty God I will be able to die a Franciscan.

Today is Tuesday, another day added to my life, another day of struggle against all evil inclinations of my flesh, a day on the hardest road with the heaviest sack I have ever carried. God willing, this is my road to heaven.

Religious are the most happy in the world… but I am not a religious, because I am not happy. I am not sad because I hope to become a priest of God. Once and forever I hope I will have enough courage to back out like a man if I have not been called.

Today I received three letters, the high point of my mail, boy they make you feel swell, but a little homesick.

I went to confession tonight… I am so early thinking about going home for Christmas. Benediction came just before night prayers. All the cares and hopes of my life were exposed to the Blessed Sacrament. Never before did I feel a sense of consolation. Left in wonder and joy, I retired to bed, knowing the power God gives to the faithful. “O, what more can I give to the Lord,” was my last reply tonight. I am restored.

Before many days had passed, my father’s friend, Joseph Kelly, with whom he traveled to the seminary, left the seminary.

And after two years, my father also left the seminary. He joined the U.S. Marines. He did not continue to the Catholic priesthood. In the 1950s, he married my mother, Ruth, and I was born.

Yet his seminary diary remains: the account of a soul wrestling with the questions of identity, purpose, direction, vocation.

This is the thing that strikes me, and, it seems to me, this raises the question of vocation in general.

And a call is normally expressed in words, and so has something to do with the Logos, with the Word which is both within, immanent in space and time, and yet above, transcending this world.

The point is that human beings are astonishing beings, “persons,” and have at their core a sense, a type of inner ear open to the hearing of a “call” from both “within” and “above” that will orient their life and identity forever.

Human beings have a logocentric nature, a nature oriented toward encountering and receiving a word, a reason, a meaning.

And this word, reason, meaning, is, as St. John tells us, Christ Himself, the Logos.

But what happens if a human society “progresses” (or is it “regresses”?) and forgets that there may be such a thing as a “call” that draws a person to a path in life which has a purpose, a meaning, a goal, a destiny?

What if a society comes to believe that there is no such call, no such purpose or meaning to human life, that it is an illusion, not real at all?

Such a society would abandon the search for an ultimate, transcendent meaning, judging such a search to be futile.

Such a society would focus all the power and energy of the human mind on the things of time, and neglect eternity as a myth.

And so the great dilemma: is there or is there not a “caller,” a meaning or reason unconditioned by time?

The central question we face is the anthropological one: What is man?

Is man a being in time without an eternal horizon?

Are human persons “in the image and likeness of God,” or casual, inconsequential, meaningless?

The central answer Christianity proposes is that man — every man, each man and each woman, each human person — is in the image and likeness of God, and in existing is meant, as St. Irenaeus tells us, to give glory to God — the ultimate reality — by becoming fully alive through the vision of God, through seeking after and finally seeing God, through the vision of the ultimate, “than which there is nothing greater.”

What does this mean? It means that any humanism, any de facto deification of man… any worship of man, not God… will not lead the human person to true happiness or true life but, on the contrary, will lead to a dead end and misery.

That is the essence of the matter, for the Christian faith, for the Catholic faith.

We have a calling, a vocation, each one of us, every one of us.

We are called to undertake a pilgrimage in this life, to set our sights on our true destiny, our true home, and journey toward that destiny, that home, in the face of every temptation, every proposed alternative destiny, focusing on that final goal alone.

The goal is to encounter the Logos, Christ, our brother, first-born of many, and by meeting Him, knowing Him, following Him, to journey home.

And by making this journey, to fulfill ourselves.

To fulfill the deepest longings of our hearts, to become ourselves, by becoming like Him.

And the way he has indicated to us is… the way of the Cross.

This is the essential message of Christianity, and it is the message that is behind all of the Church’s elaborate structures, all of the teachings, doctrines, commandments, counsels, laws, sacraments, rituals and charitable initiatives.

This is the true heart of the Church, and the true purpose of the Holy See, the true center of the Vatican — Inside the Vatican, to use the title of the magazine we have published for almost 30 years — even if all the insufficiencies and failings of men have made it difficult to see that true center.

These are the reflections prompted by a reading of my late father’s diary, written almost 80 years ago, when he was discerning his own spiritual journey and destiny and seeking to chart the course of his life. 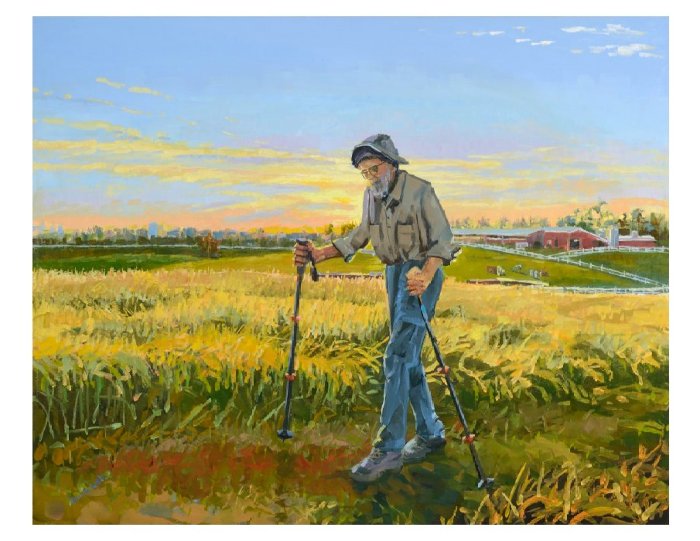 My father, Bill Moynihan, at the age of 92 walking up Horsebarn Hill near the University of Connecticut. Painting by my sister, Elaine Lisle.