“A righteous man falling down before the wicked [is as] a troubled fountain, and a corrupt spring.” —Proverbs 25:26

“By concentrating our relationship with the Eucharistic Christ only on Mass we run the risk that the rest of time and space is emptied of His presence. Thus our perception of Jesus’ constant, real and close presence among us and with us is diminished… Christ did not abolish the sacred but brought it to fulfillment, inaugurating a new worship which is entirely spiritual but which nonetheless, as long as our journey in time continues, still uses signs and rites. These will only fall into disuse at the end, in the celestial Jerusalem where there will be no temple.”—Pope Benedict XVI, June 8, 2012, Feast of Corpus Christi

“Tu es Petrus.” (“You are Peter.”) —Jesus to Peter, the words the Catholic Church considers the basis for the Petrine office (Matthew 16:18)

The days seem strange. They have since February 11, when Pope Benedict announced abruptly, without warning, that he would resign his office on February 28.

February 28 was one week ago. Only seven days have passed.

The days seem strange because it’s hard to know what’s going on. The cardinals are gathering, and have gathered, and are meeting, and are about to vote to set a date for a Conclave, where they intend to elect a new Pope, and 5,000 journalists have come to the city, to report on the election of a new Pope, and around the world, people are watching, praying, and yet, a few miles away… Pope Benedict yet lives.

But my thoughts still turn to Benedict.

And then I think of the telegram sent to Benedict by the cardinals the other day: a brief text, not cold, not offensive, but formal, lukewarm.

As if Benedict were already history. No invitation to ask him for his wisdom at this moment in time.

Of course, he has expressed his will to live “hidden from the world,” and his wish should be respected. But perhaps he would be able and might be willing to offer some insight, after his years as the head of the Church. Perhaps he is so modest and humble that he would only consider such a thing if he were asked. Yes, he will be there, it appears, for the next Pope. But it seems almost as if the cardinals are “flopping around” like fish out of water, in need of guidance. It might be that Benedict would reject any such request, but there are no rules for this situation; together, the cardinals with Benedict could make whatever rules they wish, in a situation with no precedent.

And then I play through the whole sequence of events again in my mind, going back a few years: the death of Pope John Paul II on April 2, 2005; the funeral, with lines of pilgrims moving through the streets of Rome around the clock for several days to view his casket; the quick conclave, the white smoke; the election of Joseph Ratzinger; the angry opposition to the choice; the unfolding of his papacy; his stunning homilies; his extraordinarily profound addresses, usually in September; the year-long stalemate over whether to release Summorum Pontificum, the document allowing wider use of the old liturgy; the Williamson affair; the “Vatileaks” affair; his three books on Jesus, in his own name… And then the images move more quickly: the announcement that he would renounce the papacy; the address to the priests of Rome on the Second Vatican Council; the next-to-last General Audience; the last Sunday Angelus; the last General Audience, where he drove off in his Popemobile, and Cardinal Mahony was the last cardinal to go out to the edge of the sagrato and watch him as he drove away; the last meeting with the cardinals the next morning, Cardinal Sodano’s remarks, citing the Apocalypse, and then Benedict’s reply, “among you is also the future Pope”… and then the white helicopter, lifting off from the Vatican gardens, sweeping toward the Janiculum, then back over the basilica, then out over the city toward Castel Gandolfo; the last words to the crowd from the balcony of the palace there: “I am a simple pilgrim who begins the last stage of his pilgrimage on this earth.”

And now, one week later, as they say, “out of sight, out of mind” — the cardinals gather, the media chatters, and Benedict, day by day, slips into the past, almost forgotten in just seven days’ time. And yet, he is not out of my mind.

Just a few miles away, in Castel Gandolfo, he yet lives.

Am I serious? Look, I am just a writer, sitting in a room in Rome, well after midnight, writing a letter about a situation, and a man, and a time, of importance to me. I have no standing to propose anything. But I am a writer, and a writer writes what he thinks, and what he feels. And I think and feel that the theological implications of Benedict’s resignation, and of the election of a new Pope while he yet lives, and of carrying forward an election under the glaring floodlights of the media, which have a different agenda than the Church’s agenda, all cry out for further reflection, and clarification.

For what is the role of Peter, except to be in union with Christ, in prayer, in the liturgy, in the praise and worship of God? Does the Pope need to do anything more?

Where is the Church? Is it in the buildings of cement, and stone, and wood, where we gather? Or, is it in our hearts?

In recent days, journalists have spoken of the logic of a Pope from Asia, or Africa, where “the Church is young” and where a man from that region might “bring into the Church” perhaps “hundreds of millions” of Catholics.

But this is far from the logic of the Church.

Peter must do only one thing: he must walk out on the water.

In an age when the idea of man is being dissolved into a spoonful of chemicals and a nexus of biological urges and drives, in a time when the new financial and technological powers are recklessly disintegrating the last remnants of traditional human society, building a brave new “utilitarian” world, quicker, more powerful, more plastic and malleable than ever even imaginable up until now, what humanity needs is God.

What the Pope offers is God.

He who Is, and who ever will be, unto ages of ages.

Connected to this divine, man finds his meaning.

Severed from this divine, man loses his meaning, his logos, and descends into meaninglessness.

Man — and this is what Benedict taught us, and continues to teach us even in his silence — “does not live by bread alone, but by every word that proceeds from the mouth of God.”

Cardinal Sodano said, in his February 28 farewell remarks to the Pope, citing Luke’s account of the two disciples who walked with Jesus on the road to Emmaus after his resurrection, but did not recognize him, “Did not our hearts burn within us as we walked with Him?”

Sodano said: “Holy Father, with deep love we have tried to accompany you on your journey, reliving the experience of the disciples of Emmaus who, after walking with Jesus for a good stretch of road, said to one another: ‘Were not our hearts burning within us, while he spoke to us along the way?’ (Luke 24:32). Yes, Holy Father, know that our hearts, too, burned while we walked with you these past eight years.”

He spoke in the past tense, “burned.”

And this reminded me of a story I have now decided to recount.

In the spring of 1994, I had dinner in Rome with two tradition-minded Catholics, Eric de Saventhem and Michel Davies, both now deceased. It was April 11, 1994, a Monday. They told me they had had meetings that day with Cardinal Re and Cardinal Sodano, and had been informed that the Church had decided to approve the use of altar girls at Mass, and that the announcement was imminent. By chance, I had an interview scheduled for the next morning, April 12, with Cardinal Ratzinger. During the interview, I told the cardinal what the two men had told me. “That’s not possible,” he said to me. “The matter has not yet come across my desk, and it cannot be decided until it does.”

The next day, April 13, Dr. Joaquin Navarro-Valls issued a communique saying that the Holy See had approved the use of altar girls. (The actual letter announcing the approval had been signed by the Prefect of the Congregation for Divine Worship several weeks before.) Seven years later, another letter from the same Congregation said the approval could not “require that priests of the diocese would make use of female altar servers, since ‘it will always be very appropriate to follow the noble tradition of having boys serve at the altar’ (Circular Letter to the Presidents of the Episcopal Conferences, March 15, 1994, no. 2). Indeed, the obligation to support groups of altar boys will always remain, not least of all due to the well known assistance that such programs have provided since time immemorial in encouraging future priestly vocations (cf. ibid.).”

A few miles away, Benedict yet lives.

The road to Emmaus is a road we can walk on even now, together with Benedict. 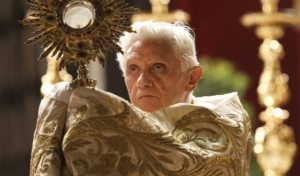