The 115 voting cardinals will begin to vote in about 48 hours from now, Sunday afternoon in Rome.

The Osservatore Romano issued a special supplement yesterday with all the photos of the 115 cardinals who will enter into Conclave. Here they are in two photos: 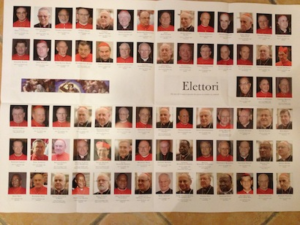 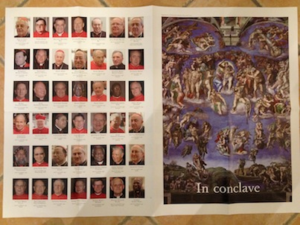 The Italian and world press are full of prognostications. Nearly all are wrong, although they may be useful to understand some of the “dynamics” of the election process. Only one will be right.

La Repubblica — which I turn to because it is Italy’s largest paper, not because everything written there is objective, or reliable; the paper “influences” the opinion of people in Italy, and, by osmosis, opinion worldwide — this morning suggested seven cardinals were the leading “papabili.”

The paper also headlines “It will be a brief conclave,” echoing the words of the Vatican Press Director, Father Federico Lombardi, S.J., who said yesterday that he presumed the cardinals would not have voted to enter into Conclave on Tuesday afternoon unless they felt they were ready to elect a Pope in a relatively brief time.

During the 20th century, the length of papal Conclaves has never exceeded 5 days. On the basis of this precedent, one would imagine that a Pope will be elected by Saturday, March 16. (However, precedents are being broken regularly in Rome in these recent weeks.)

Here is the history of the length of the last Conclaves:

Here are the names of the cardinals La Repubblica puts “in the lead” right now — again, just their opinion, and possibly, in a way, their preference:

Under the heading “Curial Cardinals” (though Malcolm Ranjith is not a Curial cardinal, being in Sri Lanka — although he was in the Curia, in the early years of Pope Benedict’s pontificate)

Each of these three is “teamed” with one of two Italians as the proposed new Secretary of State:

Then, under the heading “Reformers” are listed:

with those two “teamed” again with one of two Italians, neither of them cardinals, both from the Vatican diplomatic service (Ventura, a very capable man, is nuncio in Paris, and was for many years the personal secretary of Cardinal Agostino Casaroli, Secretary of State in the early years of Pope John Paul II) to be Secretary of State:

And then, under the heading of “Third Way” (whatever that means), is listed:

while alongside Erdo is listed a highly respected French Vatican diplomat to be Secretary of State:

What one can glean from this is that the election is now wide open, but that there is some serious “horse-trading” going on to build a consensus around a candidate who will undertake to provide continuity on the diplomatic front, while launching his papacy (again, in this schema) under either a “curial” or a “reforming” or a “third way” umbrella.

So what will likely happen?

A considerable importance must be attributed to the very first ballot. If one candidate surpasses about 40 votes, there is a strong chance that, immediately, the other cardinals will be compelled to make a decision: either to say “no” to that candidacy, and strive to form a “veto” block of 39 cardinals, so that the candidate cannot reach the 2/3s majority of 77, or to, over the next two, three or four votes, say “yes” to that candidacy, and send it over the top.

The candidate most likely to have about 40 votes is Angelo Scola, who is in many ways very close to Pope Benedict, and a student of Pope Benedict’s thought. But, if Scola seems to be impeded by the time he reaches 50 or 60 votes, the Conclave would open up to allow a number of other hypotheses, like the ones above — Sandri, Scherer, Ranjith, Ouellet, Erdo — but also many others, including the Americans, led by Dolan of New York, and then by O’Malley of Boston, but not counting out Wuerhl of Washington (who is respected in the Roman Curia) or even George of Chicago, who is regarded as a profound thinker and a man of moral courage. And there are others. At this point, it is harder to exclude a cardinal than to mention his name, as the “race” becomes wide open, and unpredictable. Something will have to happen to coalesce sentiment, and what that “something” will be is unable to be known today.

It is in this area of mystery, and the freedom of the human will, that the action of the Holy Spirit has and will have its place, imperceptible to human sense, and perhaps even to human reason, as the Spirit speaks to the mind, but even more, to the soul, where the final decision will have to be taken. 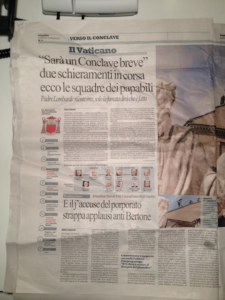 Then, here is a little something that I wrote yesterday, and did not send, but I decided, under the circumstances, to simply send it, without either supporting or condemning the thoughts expressed.

“All I can pray for and ask of the cardinal electors is: ‘Re-elect Ratzinger.'” —email from a reader

The other day, in my Letter #37, “A Living Stone,” I spoke of the fact that Benedict yet lives a few miles outside of Rome.

I ventured to wonder if some of the 115 cardinal electors who will enter into conclave on Tuesday afternoon might feel it was not right, perhaps for theological reasons, perhaps for practical reasons, to give their vote to any other man to become Pope, while Benedict XVI yet lives.

I did not propose that the cardinals vote to re-elect him.

I simply wondered what would happen if some cardinals abstained from voting, in this unprecedented situation.

However, I have since received a number of emails, like the one above, saying what I did not say: that the cardinals should vote to elect Benedict again.

Here is another of those emails:

“I have been reading your reports with thanks and a grateful heart. I too have wondered since Feb 11th about whether our leaving Benedict’s side while he yet lives is doable…. I refer you to the last sentence of # 83 of Universi Dominici Gregis. You should re-read it. Were the electors to take completely seriously this instruction I read this as a possibility, perhaps even a necessity, a compulsion, a duty, that the Bishop Emeritus of Rome could be/should be re-elected as Pope, being, in the electors’ eyes, the most qualified, most suited to govern the Universal Church even if he is currently outside the College.”

Here is Paragraph 83 of Universi Dominici Gregis, On the Vacancy of the Apostolic See and the Election of the Roman Pontiff, the letter promulgated on February 22, 1996, by Pope John Paul II, which regulates papal conclaves, with two phrases italicized:

“With the same insistence shown by my Predecessors, I earnestly exhort the Cardinal electors not to allow themselves to be guided, in choosing the Pope, by friendship or aversion, or to be influenced by favour or personal relationships towards anyone, or to be constrained by the interference of persons in authority or by pressure groups, by the suggestions of the mass media, or by force, fear or the pursuit of popularity. Rather, having before their eyes solely the glory of God and the good of the Church, and having prayed for divine assistance, they shall give their vote to the person, even outside the College of Cardinals, who in their judgment is most suited to govern the universal Church in a fruitful and beneficial way.” (Paragraph #83)

“I also ask the one who is elected not to refuse, for fear of its weight, the office to which he has been called, but to submit humbly to the design of the divine will. God who imposes the burden will sustain him with his hand, so that he will be able to bear it. In conferring the heavy task upon him, God will also help him to accomplish it and, in giving him the dignity, he will grant him the strength not to be overwhelmed by the weight of his office.” (Paragraph #86)

Now, I too would have thought all of this a bit “far out”– yes, I am not completely out of touch with reality — as I was really expressing a deep feeling of solidarity with Benedict, and not proposing anything with regard to his re-election.

But this evening, I was reading a round-up of Vatican news reports, and I noticed one by the German journalist Paul Badde, who writes from Rome for the German newspaper Die Welt.

The title was: Konklave ab 12. März und der Traum einer Wiederwahl Benedikts XVI. (“Conclave from March 12 and the Dream of a Re-Election of Benedict XVI”).

It startled me because the author of the piece, Paul Badde, has known Joseph Ratzinger personally for decades, from the 1970s in Munich. It startled me because Badde is a long-time friend of the Emeritus Pope’s personal secretary, Archbishop Georg Gaenswein. It startled me because Badde was the one who published a memorable article on the “Vatileaks” case last July which claimed that several people close to the Pope had been involved in the “Vatileaks” affair — an article which, a week later, after it was picked up in Italy by La Repubblica, was categorically denied by Father Federico Lombardi, the director of the Vatican Press Office, but an article which Badde says he stands by. And it startled me because Badde received communion from Benedict at the Ash Wednesday Mass, just after the Emeritus Pope announced that he would renounce the throne of Peter, which I mentioned at the time in my letter on that Mass.

The first part of the story was all about the cardinals’ decision to proceed to the conclave on Tuesday, March 12.

But the final paragraph read as follows:

“A high prelate from Lebanon has suggested in these days, that the best solution for the cardinals to vote for in this conclave would be simply to re-elect Benedict XVI one more time. Then the Church would immediately have a couple of fewer problems. This election Benedict just couldn’t refuse. He would have to return from Castel Gandolfo right away – (returning to Rome) like Peter, who in his flight out of a burning city of Rome met Jesus, who only asked him ‘Quo vadis?’ ‘Where are you going?’ Upon his return Benedict could rule as never before. With such a strong mandate as a re-election, the frail old man would become the most powerful Pope in the entire history of the Church.”

I emailed Badde to ask him about his story.

“Paul,” I wrote. “The Pope resigned. If he were re-elected, would he return? Or would he say ‘no, you didn’t understand me, I really am out of it all, I’m done’?”

Of course, it still seems far-fetched to imagine that the cardinals might re-elect Benedict.

But is there really someone better suited than Benedict to govern the universal Church, if the criterion is the one set forth above: that the cardinals have before their eyes “solely the glory of God and the good of the Church?”

And what is the situation now of the Roman Curia? Every single head of every curial office has now been deposed, due to the see of Peter being vacant. So, if Benedict were recalled, he could appoint to posts in the Curia anyone he wished. He could effectively carry out the reform of the Curia which everyone is saying is so urgently needed.