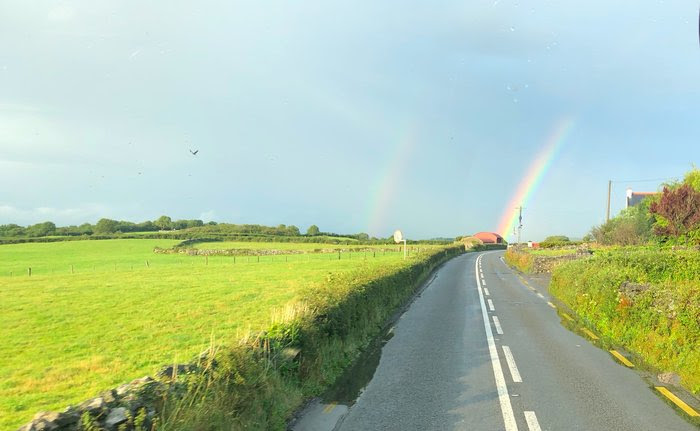 Above, the image of a double rainbow in Ireland this August, as I traveled through the country with a group of pilgrims. The rainbow appeared not long before we reached Silverstream Priory in County Meath. There we found the book: In Sinu Jesu (“In the Heart of Jesus” — the book Archbishop Carlo Maria Vigano had told me he has been reading over the past year, and which he had warmly recommended to me). The photograph was taken from the front window of the bus as we drove across Ireland

“I have looked forward to this moment; I have prayed that I may touch your hearts with the words of Jesus…

“When I look at you assembled around this altar and listen to your praying voices, your singing voices, I see the future of the Church…

“Although you still live in an atmosphere where true religious and moral principles are held in honour, you have to realize that your fidelity to these principles will be tested…

“The lure of pleasure, to be had whenever and wherever it can be found, will be strong and it may be presented to you as part of progress towards greater autonomy and freedom from rules. The desire to be free from external restraints may manifest itself very strongly in the sexual domain, since this is an area that is so closely tied to a human personality. The moral standards that the Church and society have held up to you for so long a time, will be presented as obsolete and a hindrance to the full development of your own personality…

“You will hear people tell you that your religious practices are hopelessly out of date, that they hamper your style and your future, that with everything that social and scientific progress has to offer, you will be able to organize your own lives, and that God has played out his role. Even many religious persons will adopt such attitudes…

“A society that, in this way, has lost its higher religious and moral principles will become an easy prey for manipulation and for domination by the forces which, under the pretext of greater freedom, will enslave it ever more.” —Pope John Paul II, on September 30, 1979, in Galway, Ireland, speaking to the young people of the country on the first-ever visit of a Pope to Ireland (link). Some say the Pope was eerily accurate in his prophesy of what might happen to Ireland in the future…

From Knock to Silverstream

Ireland with its rain and green and encompassing seas seems a sort of island womb, a protected circle out of which millions of Irish have gone forth to every corner of the world.

A great-grandfather of mine, also named Moynihan, left from Schull in County Cork in the 1870s to go to America, arriving first in Boston, then settling in Haverhill, Massachusetts. So some of my own family roots are in Ireland, and perhaps this is why the sea, sky and rain of Ireland seem familiar to me.

Our goal was to circle Ireland, and to see as much as we could in a week or so.

Our little group of pilgrims — Bill and Jan, Raoul and Luz, Irma (age 80!) and Patrice from Texas, Matt and Kelly from Tennessee, Rick and Molly from Vermont, Ann and Mary Lou from Australia, Maria from Serbia — wished to see Ireland as it is, and was, hoping to learn what it will be, while knowing that the most important realities are invisible to the eye.

We began at the Hill of Slane, where St. Patrick lit the Paschal fire in the year 433 A.D.

He did so against the wishes of Ireland’s High King of the time, who could see the fire from the Hill of Tara, a few miles away, where the High Kings were crowned. The king sent a messenger to tell Patrick to put out the flame. But Patrick converted the messenger, a leading Druid priest, and the flame stayed lit. In this way the light of Christ came to Ireland some 1,600 years ago.

Since then, the light has been lit again and again, in so many places, in Ireland and abroad.

Thus scholars have rightly said that the Church and the world owe an immense debt to Ireland, for the courage and loving-kindness of all those Irish faithful who have lived out their faith over these many centuries.

We began at the Shrine of Knock where Our Lady appeared on August 21, 1879 (120 years ago in two days) for two hours to about 15 people. All of them saw her, and signed affidavits attesting that they had seen the same thing. Quite astonishing. Knock is a beautiful shrine, simple, quiet, filled with a sense of peace.

Irish monks were critically important in preserving the Scriptures by copying them, all down the centuries between 500 and 1453, the year printing was invented by Gutenberg.

Through these monks, the Bible, the writings of the Fathers, and the learning of the ancient world were preserved for us.

The monks lived at monasteries like Clonmacnoise, at the very heart of Ireland, and on various western promontories and islands, including the astonishing Skellig Michael, where more than 600 steps rise from the crashing sea to a tiny monastery perched on the hillside on what is arguably the most isolated monastery in the world. (The film Star Wars contains a scene showing these hundreds of steps.)

As we traveled on, we reflected on the accomplishments and sufferings of the Irish people — especially the Great Famine in the 1840s, when more than 1 million died and some 2 million emigrated to find better life.

We spoke about the subjection of the Irish to the English, of the breaking of virtually every stained-glass window in Ireland by the troops of Oliver Cromwell in the mid-1600s, of the Easter 1916 uprising, which failed dismally when the leaders were arrested and executed (“a terrible beauty is born,” Yeats wrote), and of how, because of those executions, in reaction to that harsh action, the sentiment of the people shifted, and within a few years Britain accepted Irish Home Rule — the independence of Ireland.

And we also reflected on the “Troubles” over the past decades, since 1968, between Ireland and Northern Ireland.

And we reflected on the abuse scandals that have been uncovered in recent years, prompting many Irish to lose trust in the institution of the Church.

On the next to last day of our journey, we drove to Silverstream Priory, a tiny Benedictine abbey founded just a couple of years ago not far from Dublin in County Meath.

The weather that day alternated between rain and sun, and once, there were rainbows.

We stayed for Vespers, chanted in the traditional Latin. We stayed also for the Veneration of the Most Holy Sacrament.

Then two of the monks met with us to explain their life at Silverstream.

On the table in the gift shop, where we were speaking, I saw perhaps 20 copies of a book, in four piles of five each. I saw that it was the same book that Archbishop Vigano had recommended to me a few days earlier: In Sinu Jesu: When Heart Speaks to Heart, The Journal of a Priest at Prayer.

“Wait a minute,” I said to Father Hildebrand, an American monk living at Silverstream who had studied for several years in Rome and who spoke with great eloquence and clarity. “I have just been reading that very book. It was recently recommended to me by an Italian archbishop who told me he has been reading it. Why do you have so many copies of it?”

“Well,” Father Hildebrand said to me, “that is a rather long story. Let me simply say that the book is connected with this monastery. We cannot reveal the identity of the author, but we are able to say that the book had its origin among the monks of this community…”

He paused. Suddenly I had the strong impression that I might be standing in front of the book’s author.

“Are you the author?” I asked.

I nodded, a bit disappointed.

“I can say that the book arose from within this community,” he continued, “but I am not the author.”

“You would not be wrong to say that,” he said.

At that moment, another monk walked in.

I wanted to understand more about the mysticism of the book In Sinu Jesu — the monk-author’s sense of hearing the words of Christ in his heart.

“Could you explain something to me?” I said. “I would like to understand the essential point of Eucharistic adoration, the meaning of all those many hours spent in silence — in the eyes of the world doing nothing useful at all…”

that Vigano had recommended to me to read the book In Sinu Jesu, telling me he had been reading it and had found it important…

that I had left for Ireland, and had traveled around the island until, on the next to last day, we had reached Silverstream monastery…

that we had attended Vespers, and Eucharistic adoration, and had come out to the gift shop to talk, and that I had found there that same book, In Sinu Jesu…

and that I was now in the presence of one of the monks who was in the community in which one of the monk’s has written down the words that he had heard in deep prayer.

“What are the chances that all this was a coincidence?” I said to myself.

“What happens in adoration may be likened to what happens when someone receives a transfusion. It is as if God places a very tiny needle into the soul of the adorer, and by means of an attached tube, transfers his very life into the soul of the adorer. As in a hospital, the tube brings medicine and liquid and helps to heal whatever disease the person is suffering from. This is happening on the spiritual level, bringing spiritual healing.

“When we go into adoration, we are disposing ourselves to become nodes, conduits, for the purification of the entire Church, and through the Church, of the entire world.

“So it is not a meaningless action, or even an action aimed at one’s own personal purification. It is the essential action to bring Christ’s eucharistic purification into the entire body of the Church, to do reparation for all sins and abuses, and to begin to heal them.”

I said: “So you feel that the monks are helping to heal the abuse crisis by your hours of eucharistic adoration?”