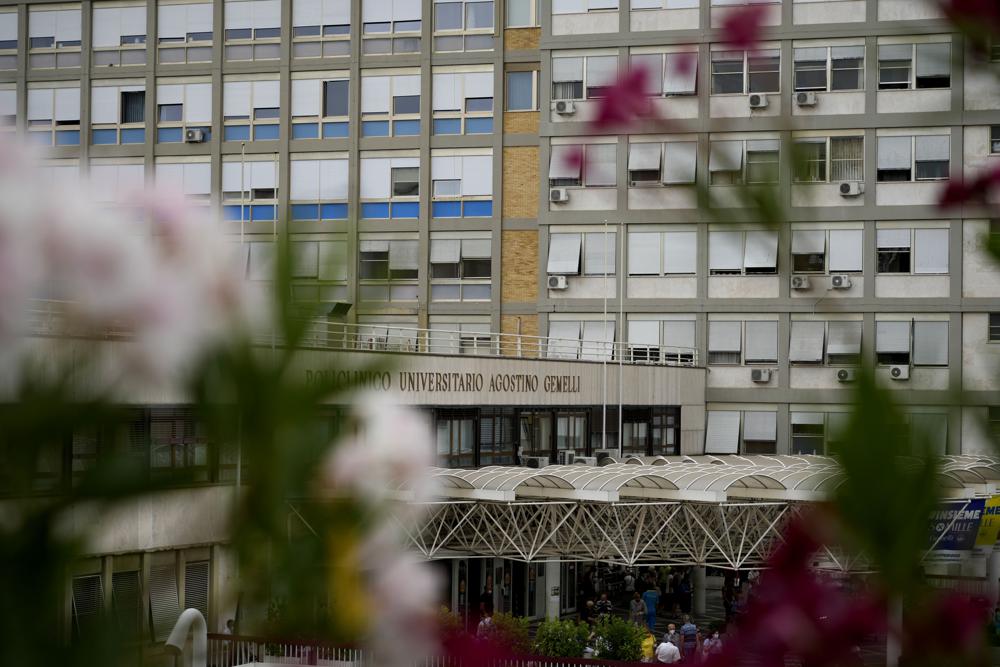 A view today of the Agostino Gemelli Polyclinic, where Pope Francis was hospitalized Sunday, in Rome. The Vatican says Pope Francis temporarily ran a temperature three days after intestinal surgery, but routine tests found no serious problem. The Vatican’s daily update on Thursday said Francis was continuing to eat and move around unassisted, and had even sent his greetings to young cancer patients at Rome’s Gemelli hospital. (AP Photo/Alessandra Tarantino)

Below, the window of the room in the hospital where the Pope is recovering 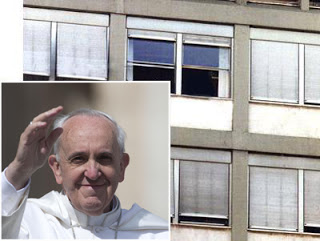 The Pope did experience a brief flare-up of fever yesterday, the Vatican said.

But then a series of tests all showed no serious problem.

There is one concern that has not been mentioned in the press, a concern I have had because my own father had surgery, under general anesthesia, at the age of 87, and for many months thereafter complained that his mind was foggy and he was “not thinking clearly.”

And just as I was recalling these things, I received an email from a friend, the Catholic writer and researcher Steve O’Reilly, raising this same concern:

“I saw your report on the Pope,” Steve wrote. “While the focus of all seems to be on his physical condition, there is something else I haven’t seen anyone else mention.

“I know in the case of my now departed parents… they each had hip-related surgeries in their 80s. My mother was never the same after it, apparently as a result of the anesthesia. Due to what happened to her, when my father had surgery… we requested as light an anesthetic as possible… so they only sedated him. Yet, even so, he was not quite the same after it. I’ve heard similar reports from others.

“My concern would be the effect this might have on the governance of the Church. If Francis is cognitively impaired even for a matter of months… would they tell us? Might someone take advantage of that impairment behind the scenes for their own purposes?”

“Seems to me a delegation of cardinals should evaluate Francis with some independent doctors once he leaves the hospital.

Here is today’s Vatican’s official statement from just a few hours ago (link):

Declaration of the Director of the Vatican Press Office, Matteo Bruni, July 8, 2021

In the afternoon, he wished to express his paternal closeness to the young patients in the nearby paediatric oncology and children’s neurosurgery wards, sending them his affectionate greetings.

In the evening he temporarily ran a temperature.

This morning he underwent routine and microbiological examinations, and a chest and abdomen scan, which proved negative.

The Holy Father is continuing with his planned treatment and eating by mouth.

At this particular moment, he looks toward all those who suffer, expressing his closeness to the sick, especially those most in need of care.

Here are excerpts from a summary report by Nicole Winfield of AP (link):

The Vatican’s daily update said Francis was continuing to eat and move around unassisted, and had even sent his greetings to young cancer patients at Rome’s Gemelli Polyclinic hospital.

“This morning he underwent routine and microbiological examinations, and a chest and abdomen scan, which proved negative,” the statement said.

Francis, 84, had half of his colon removed Sunday because of what the Vatican says was a “severe” narrowing of the large intestine. He is expected to stay at Gemelli, which has a special suite reserved for popes, through the week assuming there are no complications.

Doctors have said a fever could indicate evidence of an infection or other post-operative complications, though the Vatican statement stressed that the episode was temporary and that Francis’ treatment was progressing as planned.

The statement said Francis’ recovery is continuing as planned and that “at this particular moment, he looks toward all those who suffer, expressing his closeness to the sick, especially those most in need of care.”

Francis has enjoyed relatively robust health, though he lost the upper part of one lung in his youth because of an infection. He also suffers from sciatica, or nerve pain, that makes him walk with a pronounced limp.

Please consider subscribing to Inside the Vatican magazine. To do so, simply click on the banner below….