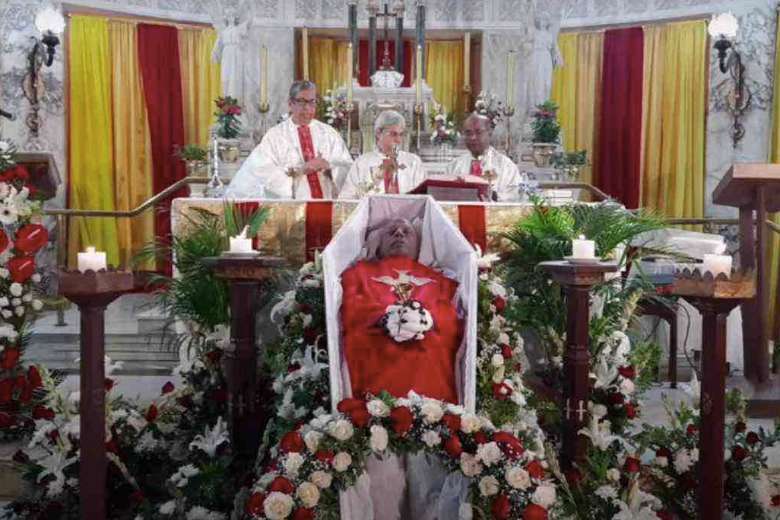 A screengrab of the funeral service for Father Stan Swamy, the Jesuit social activist who died on July 5 in a Mumbai hospital while he was still under detention accused of collaborating with terrorist activities. (He always denied the accusation.)

Below, a Jesuit priest visits Father Swamy in Mumbai’s Holy Family Hospital at the end of May. Fr. Swamy became so sick that prison authorities agreed to transfer him to the hospital. 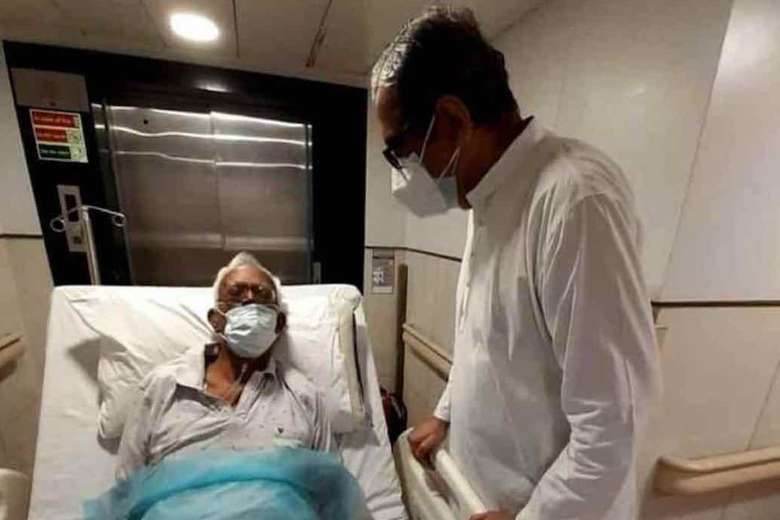 The map below shows the location of Jharkhand State, where Fr. Stan lived and worked.

The bottom photograph is a screenshot from a video. Fr. Stan is wearing dark glasses, sitting among the people he spent his entire life defending. 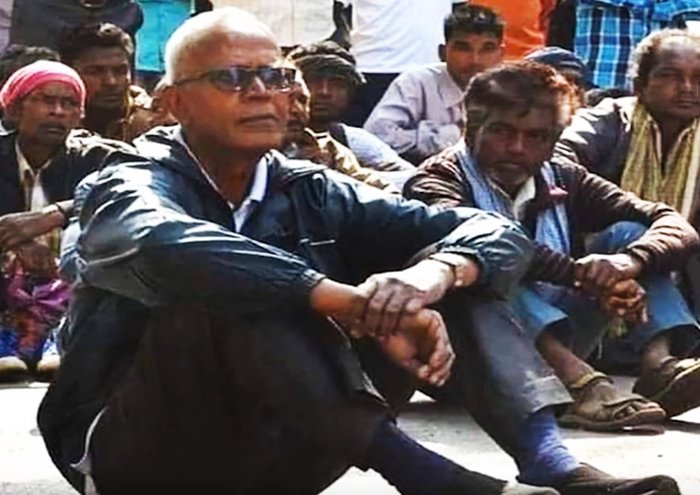 An elderly Indian Jesuit priest who spent his entire life working on behalf of the poorest of India’s poor has died after being confined for nine months in prison without bail on charges he always said were false.

The death has prompted a wave of sorrow throughout India, where the priest was regarded by millions as a good and holy man, and where many have likened him in his courage and commitment to non-violence to Mahatma Gandhi.

Fr. Stan was arrested nine months ago, on October 9, by Indian authorities on a charge of collaborating with “Maoist rebels” seeking to “destabilize the government.”

Fr. Stan denied the charges. He said his detention was part of a plan to silence all criticism of the government.

After months in prison — all of his requests to be freed on bail were denied — the priest became so ill that he was transferred by court order to Holy Family Hospital on May 28.

“With a deep sense of pain, anguish and hope, we have surrendered Fr. Stanislaus Lourduswami, S.J., aged 84, to his eternal abode on 5 July 2020,” read a statement issued by Jerry Cutinha, S.J., the provincial of the Jamshedpur Jesuit Province to which Father Swamy belonged. (link)

“He was a Jesuit for 64 years and a priest for 51 years,” the provincial wrote. “The Society of Jesus recommits itself to take forward the legacy of Fr. Stan in its mission of Justice and Reconciliation.” (link)

“The celebration of the life of this frail man, his limbs quivering with the impact of Parkinson’s disease, will hold up a mirror to the government, its policies towards its own people, particularly tribal people and the poor, and how, in violation of the statutes, it is stealing the nation’s resources, which are also the very life of tribal people, and gifting them to crony capitalism,” wrote John Dayal in a July 6 UCA News report (link).

“In the process, it [the Indian government] is also bartering away the future, with its robbery of forests, water and minerals impacting the environment and the climate. For that is why Stan Swamy had to die.

“And the state used all its might to ensure that he would die a prisoner of the state. That he died after a few days in hospital while on a ventilator was because Mumbai High Court took mercy. But he was not out on bail.”

A leading Catholic cardinal also spoke out on the priest’s death.

“With deep anguish and sorrow, we mourn the death of the martyr of the marginalized people, Father Stan Swamy, S.J.,” wrote Cardinal Charles Maung Bo, Archbishop of Yangon, Myanmar (formerly Burma) as President of the Federation of Asian Bishops’ Conferences (FABC), in a message sent to the Catholic news agency Fides, expressing condolences and solidarity on behalf of all the Asian Bishops, after the death of Indian Jesuit Father Stan Swamy (link).

“His last month in custody on a hospital bed till the last moments is the most heart-wrenching tragedy of an innocent man persecuted for doing good,” Cardinal Bo wrote.

“The custodial hospitalization restrained his movements, but in his death, his legacy is set free now, inspiring thousands in every part of India and the globe. His mission will continue and will never succumb to evil.”

Cardinal Bo added: “India has a glorious history, as the cradle of many world religions, but she also nurses a wounded history. Even the great Mahatma Gandhi, the saint who lived for the poor, was arrested and incarcerated under sedition laws by British officials. The same Gandhi is the pivot of Indian history today.

“We take solace in the thought that Father Stan Swamy, too, followed Gandhi’s nonviolent path, with a great love for those in the margins. He is the latest saint of the modern India’s poor.”

According to the cardinal, Stan Swamy understood and lived his priesthood, “extending his altar to the streets and hills of those obnoxious corners of injustice, breaking the bread of good news of human dignity and justice especially among the indigenous (tribal-Adivasi) people.”

Cardinal Bo concluded: “For too long the innocent tribals trudged a merciless way of the Cross inflicted on them by corporate greed and unjust laws. His tireless struggle to liberate these marginalized communities brought him to the peak of Calvary, of incarceration, deprivation and ultimate death. He died as a true disciple of Christ.”

Fr. Stan, a Jesuit priest, a friend of the poor, a prisoner for the last nine months of his life, has passed away.

He often said: “If you cannot be in solidarity with those who suffer or who are denied the fundamental rights to life, your life as a religious or human being is only superficial.”

May eternal light shine upon him, and may he rest in peace.

Here is an account of his death and his cremation — under prison rules — published by UCA News (Union of Catholic Asian News), a distinguished Catholic news service that covers all of Asia (link):

The body of 84-year-old Indian Jesuit priest Stan Swamy, who died under detention, was cremated on July 6 after a court asked Jesuit officials to follow prison rules.

The body of Father Swamy, who died of post-Covid-19 complications on July 5 in church-run Holy Family Hospital in Mumbai, was taken to a government crematorium after a requiem Mass.

“Although he was free from Covid-19, we have been asked by the court to follow prison rules,” Jesuit Father Joseph Xavier said at the end of the July 6 funeral service after announcing the decision to cremate the priest’s body.

Father Swamy’s body was cremated in an electric crematorium at around 6.30 p.m. after the funeral Mass, Father Joseph told UCA Newson July 7.

Father Joseph, director of the Jesuit-run Indian Social Institute based in Bengaluru city, was an associate of the deceased social activist priest.

He joined the funeral service and Mass led by Father Arun De Souza, Jesuit provincial of Mumbai, along with Father Frazer Mascarenhas, parish priest of St. Peter’s Church in Bandra, a Mumbai suburb, where the service was held.

The priest suffered a cardiac arrest early on July 4. He was put on a ventilator and never regained consciousness

Only some 20 people attended the service because of Covid-19 restrictions.

Jesuits said the ashes will be carried to Ranchi town in eastern India where the missionary priest was based and to Jamshedpur town, the base of his Jesuit province.

Father Stanislaus Arulswamy, known popularly as Stan Swamy, was admitted to Holy Family Hospital on May 28 following a court order after his health deteriorated in jail.

Father Swamy, who had Parkinson’s disease, developed a pulmonary infection, post-Covid-19 complications in the lungs and pneumonia, according to the hospital’s medical director Ian D’Souza.

“Because of the specific nature of charges against him, his bail applications were rejected by the courts … All such actions are strictly in accordance with the law,” the statement said.

The NIA accused the priest, who worked among the tribal people of Jharkhand state, of a political conspiracy with outlawed Maoist rebels to destabilize the federal government.

The priest had denied the charges and said in a message soon after his arrest that his detention was part of a plan to silence criticism of the government.

“What is happening to me is not something unique, happening to me alone. It is a broader process that is taking place all over the country. We are all aware of how prominent intellectuals, lawyers, writers, poets, activists, student leaders — they are all put in jail just because they have expressed their dissent … I am ready to pay the price, whatever it may be,” he said.

The government statement came after the media sought an official response to the death of Father Swamy in view of political leaders blaming government lapses including denial of bail and delaying medical care to the priest, who was arrested nine months ago.

The statement said that the court allowed medical treatment for Father Swamy at a private hospital “where he was receiving all possible medical attention since May 28.”

The statement also denied any violation of human rights in the case, saying India has an independent judiciary, a range of national bodies monitoring rights violations, a free media and a vibrant and vocal civil society.

“India remains committed to the promotion and protection of the human rights of all its citizens,” it said, indirectly dismissing all allegations of rights violations against the deceased priest.

Here is a link to an article in America magazine about the death of Fr. Stan (link).

Please consider taking out a subscription to Inside the Vatican magazine, which I edit. All subscriptions are deeply appreciated, and help us greatly. To subscribe, click on the panel just below.—RM