An ancient Russian icon of the Virgin Mary and the Child Jesus. Pope Francis has announced (link) that he will consecrate Russia and Ukraine to the Immaculate Heart of Mary in a ceremony of consecration on March 25 in Rome.

“I shall come to ask for the Consecration of Russia to My Immaculate Heart… If people attend to My requests, Russia will be converted and the world will have peace.” —The Virgin Mary, speaking in an apparition to the three shepherd children of Fatima on July 13, 1917, just three months prior to the Bolshevik Revolution in October of 1917. Pope Francis said yesterday that he will consecrate Russia and Ukraine on March 25. The matter has been a matter of some controversy in the Church

“The Blessed Virgin’s request for the Consecration of Russia remains one of the most controversial aspects of the entire Fatima Message. While several popes have undertaken consecrations of the world since the request was made public (including Pope John Paul II in 1982 and 1984), sadly, none of these have fulfilled the specific requirements of Our Lord and Our Lady’s requests… Our Lady… indicated that the Holy Father is to be joined in the act of consecration by all the Catholic bishops of the world on the same day and at the same time in their respective dioceses.” —Explanation of the Fatima Consecration by the Fatima Center (link)

I received dozens of emails after my letter yesterday containing the announcement that Pope Francis intends to consecrate Russia and Ukraine to the Immaculate Heart of Mary on March 25 in Rome.

that the Pope should invite all the bishops of the world to join him in the Act of Consecration of Russia and Ukraine on March 25.

“What about the part it is supposed to be in union with all the bishops?”

“Peace of Christ, I am pleading with you to please ask the Holy Father to order all of the Bishops throughout the world to unite in the Prayer Of Consecration of Russia to the Immaculate Heart of Mary on March 25, 2022 @ Rome Time 5:00 pm! We cannot miss this very Holy opportunity for Grace from Heaven! What are we as a community going to do? Please help — let us set the world on fire! I also sent an email to the Holy Father! Please respond, God bless, A mother in the pew

Deborah Burton wrote: “Robert… Our Lady made two requests that need to be fulfilled… not just the consecration of Russia… she said “and” … 1st Saturday Devotion… that is not a suggestion… both are required. Even after the Pope does this consecration… Our Lady is still waiting for our response to her request for us to stop the spread of errors and enjoy peace. Thank you!”

Christian Chojnowski wrote: “Dear Dr. Moynihan, May this perchance signify the possibility of working together and having all the bishops participate in the Consecration? I whole-heartedly pray this will happen! Yours truly in Christ.”

So, this is the voice of the ordinary faithful, the “little people” who have faith and who pray daily that there be peace in our world.

They are asking that Pope Francis invite all the Catholic bishops of the world to join him in this consecration of Russia and Ukraine on March 25.

Perhaps the most important message I received was from Bishop Athanasius Schneider.

Bishop Schneider wrote a message at the request of the Faith and Reason Fraternity, a group of two dozen or more Catholic scholars, authors and journalists, of which I am a member.

Bishop Schneider is the Auxiliary Bishop of Astana in Kazakhstan, formerly a part of the Soviet Union (Schneider is from a family German origin that left Germany for Kazakhstan generations ago.)

A Message from Bishop Schneider

The Holy See has announced that Pope Francis will consecrate Russia and Ukraine to the Immaculate Heart of Mary on Friday, March 25, the Feast of the Annunciation, during a 5pm penance service in St. Peter’s Basilica.

This news ought to fill all Catholics with deep joy, consolation and encouragement, and we hope that it will also bring joy and solace to our dear Orthodox brothers and sisters in Russia and Ukraine.

As we know from Our Lady’s request to Sister Lucia, the Pope should invite all bishops to unite themselves with him in making this consecration.

We hope, that even in the absence of a formal invitation from the Pope, many bishops will unite themselves to this act of consecration.

Bishop Schneider also enclosed this prayer to be said every day for the next nine days, in preparation for the consecration of Russia and Ukraine:

O Immaculate Heart of Mary, Holy Mother of God and our most tender Mother. Look down upon the distress in which the Church and all humanity finds itself due to the spread of godlessness, materialism and the persecution of the Catholic Faith, errors of which you warned in Fatima.

You are the Mediatrix of all graces. Obtain for us the grace that all the bishops of the world, in union with the Pope, may consecrate Russia and Ukraine to Your Immaculate Heart on March 25, 2022. By this consecration we hope — as you told us in Fatima — that, at a time appointed by God, Russia will be converted, and mankind will be granted an era of peace.

We hope that by this consecration, the triumph of Your Immaculate Heart will soon draw near and the Church will be authentically renewed in the splendor of the purity of the Catholic Faith, the sacredness of the liturgy and the holiness of the Christian life.

O Queen of the Holy Rosary and our most tender Mother, turn Your merciful eyes toward the Pope, the bishops and each of us, and graciously hear our fervent and trusting prayer. Amen.

The Latin phrase Vox populi, vox Dei (“The voice of the people [is] the voice of God,” is an old proverb.

An early reference to the expression is in a letter from the theologian Alcuin to Charlemagne in 798 A.D.

The full quotation from Alcuin actually criticizes this maxim, and reads: “Nec audiendi qui solent dicere, Vox populi, vox Dei, quum tumultuositas vulgi semper insaniae proxima sit” (“And those people should not be listened to who keep saying the voice of the people is the voice of God, since the riotousness of the crowd is always very close to madness.”)

Yet, this passage from Alcuin indicates that already by the end of the 700s the phrase had become an aphorism of political common wisdom.

And that wisdom is that, when the people, the common people, express a deep belief or feeling on a matter of some importance, they are expressing… the mind of God…

In this case, concerning the announcement of Pope Francis that he will consecrate Russia and Ukraine to the Immaculate Heart of Mary on March 25, the “vox populi” — the “voice of the people,” the common judgment of the simple Catholic faithful — is that the consecration ought to be made by all the bishops of the Catholic Church, invited by Pope Francis to join with him in making the consecration.

The photos below, released today by the Moscow Patriarchate, show the Russian Orthodox officials (Patriarch Kirill, Metropolitan Hilarion, and a translator) in a room in Moscow, speaking today, March 16, via video link-IP with Pope Francis and Cardinal Kurt Koch in Rome. 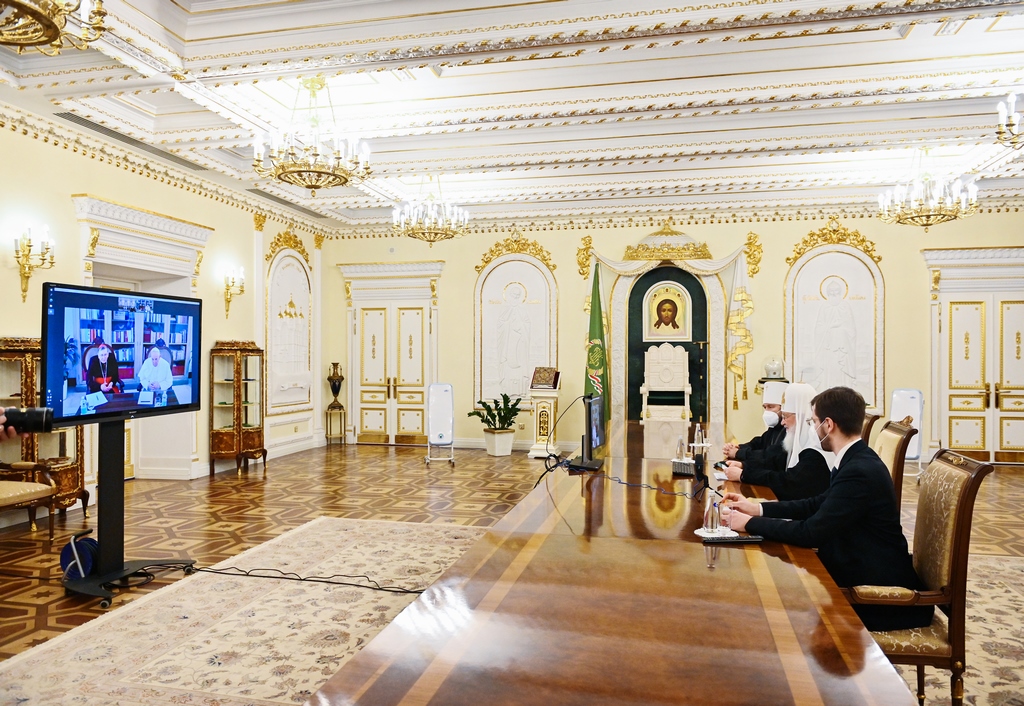 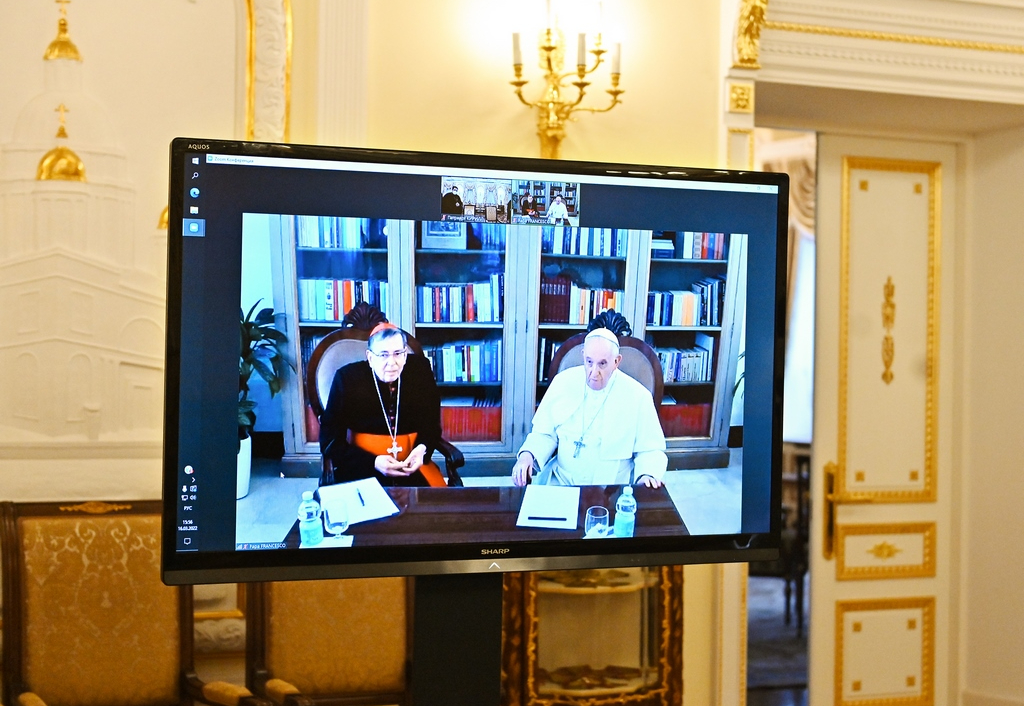 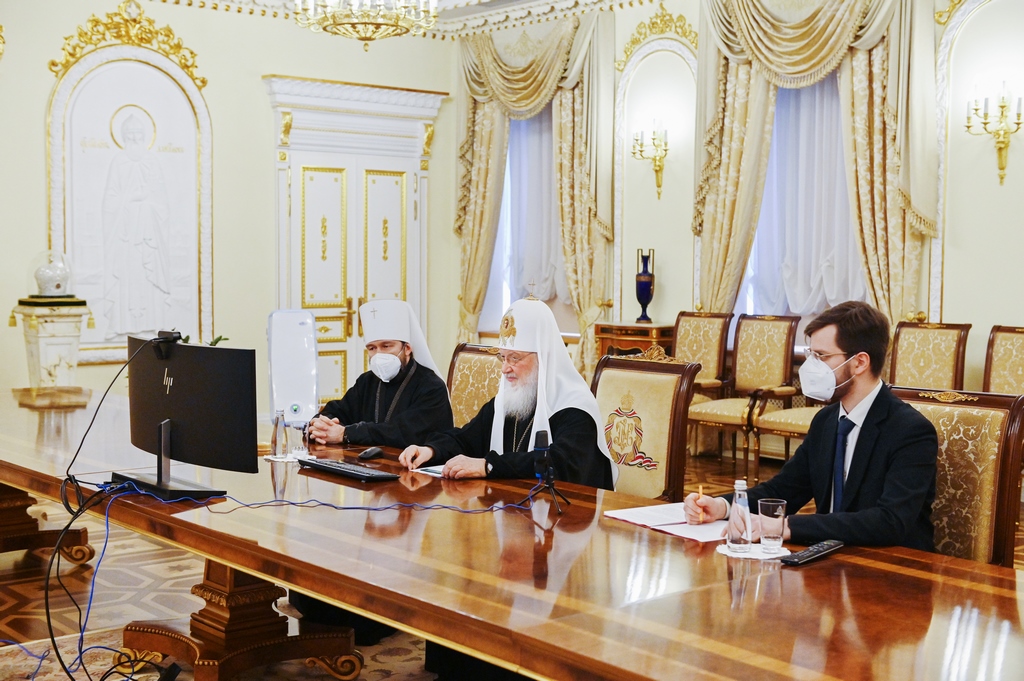 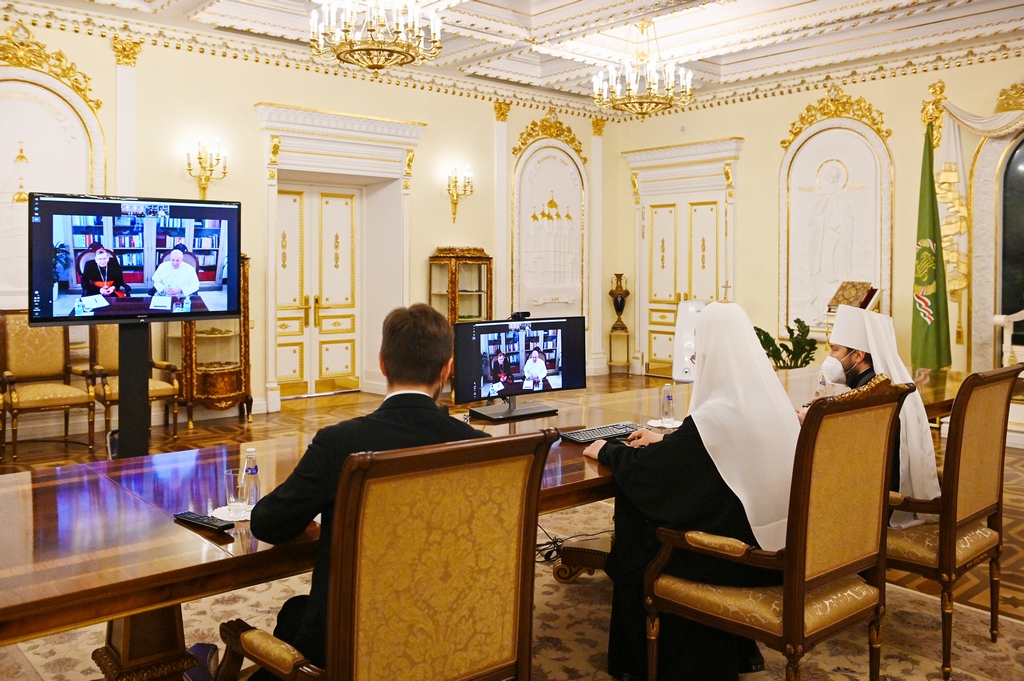