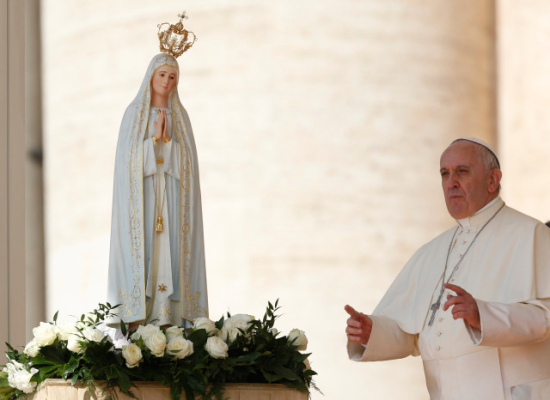 A report that Pope Francis will ask all the Catholic bishops of the world to join him March 25 in consecrating Russia and Ukraine to the Immaculate Heart of Mary, as requested by the Virgin Mary at Fatima in 1917, has now been confirmed in a letter from the US Bishops’ Conference containing a March 17 letter on the matter marked “Urgent” from the Pope’s nuncio (representative) in America, Archbishop Christophe Pierre.

Matt Gaspers, in a special report for Catholic Family News, sent out the confirmation a few minutes ago, with links to the texts in question. See below. —RM

In a letter dated March 17 and addressed to USCCB President Archbishop José H. Gomez of Los Angeles, Archbishop Christophe Pierre, current Apostolic Nuncio to the United States, provides formal notice about the upcoming papal consecration of Russia and Ukraine and asks Archbishop Gomez “to inform the members of the USCCB and, through them, the priests of the various dioceses and eparchies of the country….”

“In the context of the tragic events unfolding in Ukraine,” writes Archbishop Pierre, “the Holy Father, Pope Francis will lead an Act of Consecration of Russia and Ukraine to the Immaculate Heart of Mary on the Feast of the Annunciation, March 25th next.”

The Nuncio goes on: “The Holy Father intends to invite each Bishop, or equivalent in law, together with his priests, to join in this act of consecration, if possible, at an hour corresponding to 5pm Rome time. In the coming days, the Holy Father will address a letter of invitation to the Bishops, enclosing the text of the Prayer of Consecration in the various languages. I write now, asking you to inform the members of the USCCB and, through them, the priests of the various dioceses and eparchies of the country, about the Holy Father’s invitation.”

“The same information,” Archbishop Pierre explains, “will be shared with the federal authorities in Washington, D.C. and with the Diplomatic Corps of this capital. An invitation is being extended to the members of the same Corps to attend a Mass offered by Cardinal Wilton Gregory, Archbishop of Washington, at the Basilica of the National Shrine of the Immaculate Conception at 12 noon on Friday, March 25th next.”

Your Eminence / Your Excellency,

I am pleased to share the attached copy of a letter from His Excellency Most Reverend Christophe Pierre, Apostolic Nuncio, regarding the Act of Consecration of Russia and Ukraine to the Immaculate Heart of Mary on the Feast of the Annunciation, March 25th.

While this “invitation” from Pope Francis to the bishops is obviously not the same as an “order”, which is what Our Lady specified, it is nonetheless a positive sign. Let us keep praying and fasting for the consecration to be done according to Heaven’s specific conditions!

Full text of the USCCB memorandum and letter from the Apostolic Nuncio available here.

Matt Gaspers is the Managing Editor of Catholic Family News. He was asked by John Vennari (1958-2017), longtime Editor of CFN and stalwart defender of the Faith, to carry on CFN’s important work shortly before Mr. Vennari’s passing. In addition to writing for CFN, Mr. Gaspers has also been published by The Fatima Crusader, OnePeterFive, and LifeSiteNews. His study and writing interests include theology, Church history, Fatima, Islam, and the spiritual life. He has spoken at conferences hosted by Catholic Family News and the Fatima Center. He and his wife, together with their children, reside in Colorado.