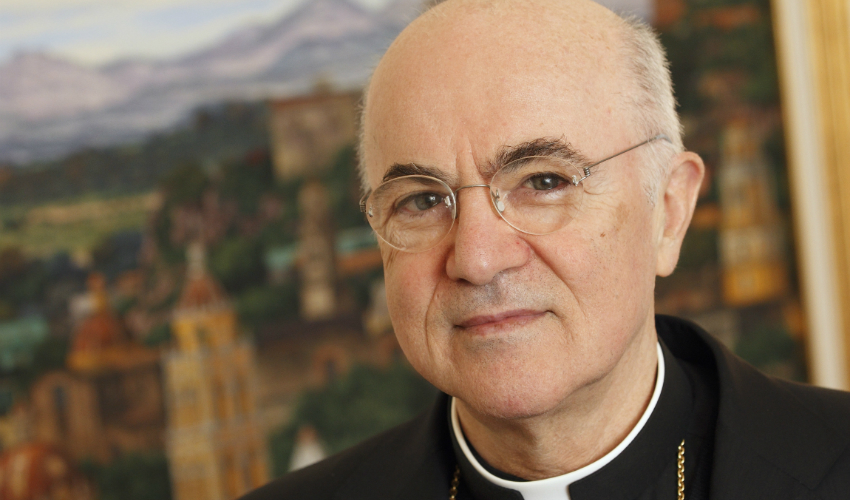 “Silence leaves in error those who might have been instructed.”—Archbishop Carlo Maria Viganò, 78, citing St. Gregory the Great (Pope from 590 to 604). St Gregory’s words are part of the Office of Readings for the Feast of St. Bruno. That feast fell on Sunday, October 6. Viganò entitled his brief reflection on St. Gregory’s appeal to all pastors to speak the truth “Fraternal Correction.” The text was released yesterday to an Italian journalist’s website and to LifeSiteNews

A brief “Fraternal Correction” was released on Sunday, October 6, by Archbishop Carlo Maria Viganò to two media outlets — one an Italian journalist’s blog (Aldo Maria Valli‘s Duc in altum), the other an English-language website (LifeSiteNews),

Viganò’s “Fraternal Correction” is made up almost entirely of a passage of St. Gregory the Great‘s “Pastoral Rule,” composed almost 1,500 years ago.

St. Gregory’s essential point is that all pastors must speak out when dangers threaten their flocks. St. Gregory says pastors must “oppose worldly powers with a free voice in the defense of the flock.”

The words are in the Office of Readings for October 6, the Feast of St. Bruno.

Viganò begins by noting that the words are offered to pastors by the Office of Readings “for their meditation.”

He closes by saying that “every priest must examine himself assiduously so as to conform his conduct to the supernatural light of this ‘Pastoral Rule’ of St. Gregory the Great,” and adds: “including cardinals and bishops and especially Pope Bergoglio, S.J.!”

This is how LifeSiteNews presented the piece:

ROME, October 7, 2019 (LifeSiteNews) — Archbishop Carlo Maria Viganò on Sunday issued a statement warning all pastors of the Church not to “hide in silence” but to speak out against the “wolves” and “worldly powers” that are threatening Christ’s flock.

The “fraternal correction,” written on the Oct. 6 liturgical memorial of St. Bruno, founder of the Carthusian Order, comes on the opening day of the Amazonian Synod, being held at the Vatican Oct. 6-27.

Taking a page from the “Pastoral Rule” of St. Gregory the Great, a sixth-century patristic text which carefully details the duties and obligations of the clergy concerning the spiritual formation of their flock, Archbishop Viganò invites priests, bishops, cardinals and “especially” the Pope to examine their hearts so as to conform them to its “supernatural light.”

Here below is the official English text of Archbishop Viganò’s statement, which was published in Italian on Duc in altum.

Today, October 6, the XXVII Sunday after Pentecost and the memorial of St. Bruno, the Office of Readings offers pastors for their meditation the following passage from the “Pastoral Rule” of St. Gregory the Great, Pope (Book 2, 4 PL77, 331):

“The pastor should be discreet in keeping silence and profitable in his speech, lest he either utter what ought to be suppressed or suppress what he ought to utter. For just as reckless speaking leads someone into error, so indiscreet silence leaves in error those who might have been instructed.

“For often reckless pastors, fearing to lose human favor, shrink timidly from speaking freely the things that are right; and, according to the voice of Christ who is the Truth (John 10:12), fail to attend to the care of their flock with the love of shepherds, and act instead as mercenaries. For when the wolf comes, they flee and hide themselves in silence. Thus, the Lord through the prophet upbraids them, saying: ‘Dumb dogs, that cannot bark’ (Isaiah 56:10). And, again He complains, saying: ‘You have not gone up against the enemy nor have you built a wall for the house of Israel to stand in battle on the day of the Lord’ (Ezekiel 13:5). Indeed, to ‘go up against the enemy’ is to oppose worldly powers with a free voice in the defense of the flock. And to ‘stand in battle on the day of the Lord’ is to resist, out of the love of justice, evil persons who oppose us.

“For if a shepherd fears to say what is right, what else is it but to turn his back in silence? But certainly, if he puts himself before the flock [so as to protect them], he ‘builds a wall for the house of Israel’ against its enemies… Whoever undertakes the priesthood assumes the office of a herald, so that wherever he goes he proclaims the coming of the dread Judge. Therefore, if the priest does not know how to preach, with what voice will such a mute herald proclaim? It is for this reason that the Holy Spirit sat upon the first shepherds in the form of tongues (Acts 2:3), because whomever he has filled, he gives the power of eloquent speaking.”

Every priest must examine himself assiduously so as to conform his conduct to the supernatural light of this “Pastoral Rule” of St. Gregory the Great, including the cardinals and bishops, and especially Pope Bergoglio, S.J.!

The text, in Italian, was released to Italian journalist Aldo Maria Valli for publication, on his website (link).