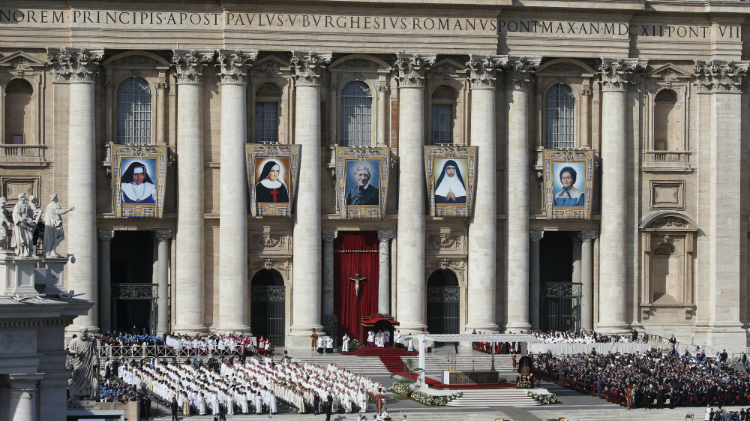 Today is the 102nd anniversary of the mysterious “Miracle of the Sun” which occurred in and near Fatima, Portugal, in 1917, as a conclusion to the six apparitions of Our Lady to the three shepherd children, Lucia, 10, Francisco, 9, and Jacinta, 7.

So much is happening in these days, in Rome and around the world, that it seems bewildering… almost inducing a sense of vertigo.

It is difficult to keep perspective and balance amid the flood of news about the Amazon Synod, financial raids in the Vatican, claims and counter-claims about what the Pope has said about profoundly important doctrinal matters. Rome is today filled with news, declarations, clarifications, spins, mystifications, semi-mystifications, much of it somewhat bizarre, as if all that is being said and reported is “full of sound and fury, signifying nothing.” (Shakespeare, Macbeth, Act 5, Scene 5, lines 17-28).

But there seem to be some very good things, too.

Today John Henry Cardinal Newman (1801-1890) was canonized in Rome, along with four others, all women, in a splendid, solemn ceremony.

(I note in passing that it seems that in St. Peter’s Basilica and Square, communion in the hand is no longer being practiced. Today many people held out their hands to take the host, but the priests placed the host on their lips. But I do not know if this is a general principle now being established.)

Here is the homily of Pope Francis, link.

Now we may call on St. John Newman for his intercession in prayer –this great soul, whose sanctity has been recognized by evident miracles of his intercession, after we all have benefited for more than a century from his intellect and scholarship.

Newman believed and was able to set forth and explain with great eloquence the central role of Christ in all reality — especially in the reality of the human soul.

Newman understood that man in this natural world (this “mother earth”) is not fully at home, that we are born for another, higher world which is beyond this biosphere — which yet must be tended, as a good steward tends his master’s vineyard.

Newman understood, with Walker Percy, that man in this world is “lost in the cosmos” (whether in cities, in endless suburbs, or in jungles) without a savior — a savior who is a person, not a principle, not an ideology, not a philosophy, to forgive him for his passions, excesses, weaknesses, sins, to be meaning (logos) to him, yesterday, today, forever.

Newman discovered Christ, or perhaps better, Christ led Newman to discover Him, and Newman was thenceforth faithful, to the end.

To our own lasting benefit. For which we thank him. St. John Henry Newman… pray for us. (Below, a reflection on Newman from another author.)

Also, yesterday, October 12, the Council of the Orthodox Church of Greece supported the decision of Ecumenical Patriarch Bartholomew to grant autocephaly to the Ukrainian Orthodox Church. (link) (link)

The move isolates further the Russian Orthodox Church, which has strongly opposed the decision of Bartholomew. (link)

But also today in Rome there were rumors of important changes in the Vatican police and security service — without any clarity about the real reason for these changes.

There is clearly something important happening, but what is it? Those who really know don’t talk, and those who talk… don’t know. 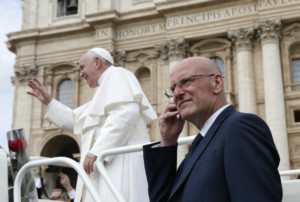 Domenico Giani, 57, born in Arezzo, Italy, Commandant of the Vatican Gendarmes (the Vatican police force, but also, the Vatican intelligence service) under Pope Benedict and for the entire 6.5-year pontificate of Pope Francis (so, someone who knows the details about who works in the Vatican, what they are doing, what in their background might be of concern or possible matter for blackmail, what trends or lobbies might be developing that could harm, or help, the Holy Father) is now expected, according to several news reports that seem reliable, to hand in his resignation tomorrow… at the Pope’s insistence. (link) (link)

This would arguably be (granted differences due to the size of the entities involved) like the forced resignation of the head of the American FBI, or of the US National Security Agency (NSA), or of the US Central Intelligence Agency (CIA), or of the head of MI-5 or the KGB — or, considering the overarching authority of Giani over the Vatican’s security, of several of such agencies at once.

Why has this come to pass?

Computers and documents were collected from several offices, and five relatively low-ranking people — as Archbishop Carlo Maria Viganò suggested to me at the time — were accused of having acted improperly, and were suspended from their jobs.

Then, on October 2, a kind of digital poster (link) was drawn up by the Vatican police (notionally under Giani’s direction) which showed the faces of all five suspended workers, stating that these five people (one a woman, the mother of young children) were not to be allowed into the Vatican except to visit the health services for medical care (one of the five, the only monsignor of the group, who has for years been highly respected for his serious and honest work, continues to live in the Domus Santa Marta, while suspended from his job).

This sort of “wanted poster” was sent out as a PDF by email to all Vatican police and all Swiss Guards, evidently so the police and guards could stop any of these five from visiting or moving around Vatican City.

But this PDF was also, somehow, sent out of the Vatican by someone anonymously to several press agencies, and photos of the PDF were published in several places on the internet.

This publication seemed to cast a “dark cloud” on the names and reputations of these five workers, though they had not ever been tried or convicted of anything.

The Osservatore Romano even wrote an article saying that the five were suffering from a “media lynching” (“gogna mediatica“).

So a type of raid occurred, but the handling of the news of who was raided and then suspended from their posts was immediately criticized within the Vatican itself.

When Pope Francis heard this “wanted poster” had been published, he said it was like a “mortal sin” to ruin the reputation of these individuals.

The fairly new director of the Holy See Press Office, Matteo Bruni, confirmed that, after the publication of the photos of the suspected people, “an investigation has begun, at the behest of the Holy Father, on the illicit distribution of a document for internal use of the forces of security of the Holy See, whose gravity, in the words of Pope Francis, is comparable to a mortal sin, since it is detrimental to the dignity of persons and the principle of the presumption of innocence.”

But it appears that Giani has not managed to discover who forwarded the PDF of the poster to the press outside the Vatican — and this failure is said to have irritated the Pope, to the point that, in a meeting with Giani, he has asked for his resignation. (Another post will be found for him elsewhere to ease the transition, the Italian press is reporting.) It is said that his likely replacement at the head of the Vatican’s security forces will be his vice-commander, Gianluca Gauzzi Broccoletti, who was named to the post in December by Pope Francis.

The former head of the “Second Section” of the Vatican’s Secretary of State, Cardinal Angelo Becciu, commented today that what was occurring is “a struggle for potere” and that, in the curia, the “sense of loyalty” is “growing less.” (link)

So, with regards to the Vatican’s efforts to end financial corruption, this case of the five low-level workers whose offices were “raided” two weeks ago seems to have widening repercussions…

And then there is the strangest case of all.

It is the now-famous case of a 95-year-old Italian journalist-editor, Eugenio Scalfari (founder of the La Repubblica newspaper) who last week wrote an editorial “out of the blue” (or was it?), claiming that, in his many interviews with Pope Francis over these recent years, Pope Francis told him clearly that he, Francis, did not believe in the divinity of Jesus while he lived as a man in Palestine 2,000 years ago. (But see this article for examples in past years where the Pope has spoken of the divinity of Jesus: link.)

This assertion immediately drew two rather weak denials from the Vatican press office. Both said the quotations of the Pope were not accurate, that the Pope had never said Jesus was not God.

And many of his “quotes” have been characterized by Vatican officials as inaccurate, not trustworthy, false.

Yet Francis continues to meet with Scalfari.

So it is a puzzling situation.

“As already stated on other occasions, the words that Dr Eugenio Scalfari attributes in quotation marks to the Holy Father during talks with him cannot be considered a faithful account of what was actually said but represent a personal and free interpretation of what he heard, as appears completely evident from what is written today regarding the divinity of Jesus Christ,” Matteo Bruni, the director of the Holy See’s press office, said in a statement on October 9.

But many Catholics (including Archbishop Viganò; here is an October 10 LifeSiteNews article by Diane Montagna containing his statement, which is important to read, link), quite outraged that this type of assertion should have been made at all, stated publicly that they think it is so important a point that Pope Francis himself should make at least a brief statement, affirming that he does believe Jesus was divine.

And this Francis has not done.

And here is an article by the conservative Italian Catholic scholar Dr. Roberto de Mattei that addresses some of these issues. (link)

One thing may be said with certainty: there seems to be an effort on the part of some person, or group, or groups of persons, inside of the Vatican, outside of the Vatican, to keep up a continuous stream of confusing rhetoric… not at all in keeping with the example of St. John Henry Newman, whose entire life was a search for clarity in charity.

And then there is the Synod on the Amazon region of South America. I have not written anything on the Synod, and it will continue for two more weeks. But what already seems clear is that there will be a strong push for, and perhaps synodal approval of, the ordination in the Amazon region of older married men as priests, and of women as deacons, and an appeal to add some sort of “sins against nature” or “sins against the environment” to the traditional list of sins which Catholics believe are evil acts to be repented of if committed.

There will be more to say on this in days to come.

Pope Benedict XVI told us on May 13, 2010, that we would be mistaken if we believed that the message of Fatima was somehow “finished,” or irrelevant to our time. (link)

“We would be mistaken to think that Fatima’s prophetic mission is complete,” the Pope said.

“God… has the power to come to us, particularly though our inner sense, so that the soul can receive the gentle touch of a reality which is beyond the senses,” he said. “For this to happen, we must cultivate an inner watchfulness of the heart, which most of the time we do not possess on account of the powerful pressure exerted by outside realities and the images and concerns which fill our soul.”

He concluded: “The Lord told us that the Church will always be suffering in various ways, up to the end of the world. The important point is that the message, the answer of Fatima, is not substantially addressed to particular devotions, but is the fundamental response: permanent conversion, penance, prayer, and the three cardinal virtues: faith, hope and charity.”