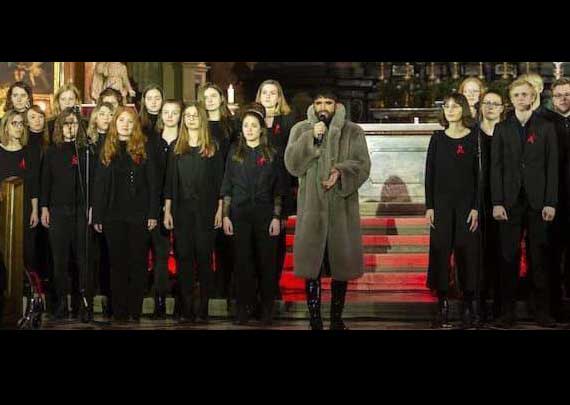 Top, a moment from the controversial fund-raising event in Vienna’s Cathedral of St. Stephen on Saturday, November 30. The figure in the center of the top photo, and in the lower photo, is Austrian singer Thomas Neuwirth, also known as Conchita Wurst.

Neuwirth is an Austrian recording artist and “drag queen” known for his stage persona Conchita Wurst. He uses masculine pronouns when referring to himself but feminine pronouns to describe Conchita. Born in Gmunden, Austria, Neuwirth began appearing in 2012 as Conchita — a female character noted for her beard — and came in second in the Austrian pre-selection for the Eurovision Song Contest 2012. Conchita represented Austria at the Eurovision Song Contest of 2014, winning the contest as the “best in Europe.” It brought Neuwirth international attention and established him as a “gay icon,” resulting in invitations to perform at various “pride parades,” the European Parliament, and the United Nations Office in Vienna.

Introductory note: Archbishop Carlo Maria Viganò, 78 (79 in January) is retired from a career as a Vatican diplomat and is living a quiet life of study and prayer. He is following closely the great issues facing the Church by reading articles, immersing himself, through the breviary (the daily official cycle of Church prayer) in the mind and spirit of the Church Fathers. He has decided to write brief reflections on the issues of the day from the perspective of a faithful son of the Church. He feels called to offer these reflections, he says, because the power of secular thought today is so great that it is creating confusion, opening the way to a loss of that faith which he, as a bishop, vowed to defend. He hopes his thoughts, offered as the fruit of his prayer and meditation, may help others to see more clearly the contours of the present battle, and the goodness of the Lord, who has called all Christians “out of darkness, into His marvelous light.”

I have been preparing a full-length report on a series of conversations I recently had with the archbishop, which will be released soon.

Here is an article about the November 30 event by Diane Montagna of LifeSiteNews (link), and the Archbishop’s latest reflection on the event.

ROME, December 1, 2019 (LifeSiteNews) — Archbishop Carlo Maria Viganò has denounced a pro-LGBT concert hosted last night in St. Stephen’s Cathedral in Vienna, calling it the “yet another homoerotic and blasphemous provocation.”

In a message to Austrian native Alexander Tschugguel, who organized a Rosary outside the cathedral while the concert was taking place, Archbishop Viganò said the event represents “the sinister vision of a Church that seems to want to rebuild itself against the faith and against the truth of the human person.”

Tschugguel, 26, gained worldwide attention last October during the Amazon Synod, after he seized several “Pachamama” statues from a church in Rome and threw them into the Tiber.

Archbishop Viganò said in his message: “Gay activists, transvestites and transsexuals perform on the Cathedra of St. Stephen, when instead they should receive from the Catholic Church the proclamation of Christ’s liberating Truth and the gift of his saving Love, freely offered to all those who, from the depths of their wounds and repentance, dare to acknowledge their need for salvation.”

Joining in spirit with those praying the Rosary in reparation for the event, the Italian archbishop reminded them that “the enormity of the scandals will never diminish the Lord’s power.”

“We have no reason to lose courage or confidence,” he added.

The November 30 benefit concert, called “Believe Together,” was hosted for the third consecutive year by an association called LIFE+ and marked World AIDS Day.

Among other performers, it featured Thomas Neuwirth, [aka drag queen ‘Conchita Wurst’], the singer who, bearded and dressed in an evening gown, represented Austria in 2014 Eurovision. Neuwirth performed in the sanctuary of the fourteenth century cathedral, with male and female adolescents used for back-up.

Homosexual activist Gery Keszler, who organized the November 30 concert, thanked Cardinal Schönborn for his presence and permission to use the cathedral, saying: “We are very grateful for the trust that the cardinal has placed in us.”

According to Kathpress, Cardinal Schönborn “thanked everyone for having a big heart and not forgetting the people who need our help.”

The Cardinal also stressed that he did not only want to welcome the participants and visitors of the charity evening as “guests,” saying, “you should know that we are all at home in this cathedral. It is the roof over the soul, which is expressed in these stones and which we need so much.”

The theme of the evening’s music was “longing for angels.”

Keszler said that in dealing with HIV/Aids, everyone can be an angel. He added that angels are also “door openers for all who are far away from Church, because angels have no fear of contact. They do not judge according to life situations or religion. They are a symbol of solidarity.”

Video of the 2019 concert suggests it was somewhat more subdued than last year’s event. This was not a difficult task, as the 2018 benefit concert featured an actor known for playing homosexual roles, standing shirtless on the altar rail, performing to loud rock and electronic music amid other actors dressed as demons.

Here below is the official English translation of Archbishop Viganò’s message on the occasion of the November 30, 2019 event, in support of the Rosary initiative outside the cathedral organized by Alexander Tschugguel.

Dear faithful gathered in prayer for the recitation of the Rosary outside the Cathedral of St. Stephan in Vienna,

May the Lord Jesus and the Virgin Mary be with you!

We have seen idolatry penetrate the Temple of God and lay claim to the worship due exclusively to the living and true God.

Several small statues, identified as the Pachamama idol, were carried in procession.

Dear Alexander remembered the warning of the jealous God — jealous because He is the “Friend of man,” who is jealous for his eternal truth and his glorious destiny.

This warning echoes in the pages of the revealed Scripture, which should fill us all with sacred trembling: “You shall break down their altars, and dash in pieces their pillars … and burn their graven images with fire!” (Deuteronomy 7:5). You shall drown them in the waters of the Tiber, “for it is an abomination to the Lord your God. And you shall not bring an abominable thing into your house” (Deuteronomy 7:25-26).

St. Paul teaches us that man falls into idolatry when, having become incredulous and apostate, he despises the knowledge of God and persists in his refusal to glorify him, “The God who made the world and everything in it, being Lord of heaven and earth … himself gives to all men life and breath and everything … ‘In him we live and move and have our being’” (Acts 17:24,28).

Idolatry stifles truth in injustice, it darkens the mind and perverts judgment. Then man, at the mercy of the tyranny of his vile passions and his wandering desires, abandons himself to every form of perversion and impurity, “to the dishonoring of their bodies among themselves, because they exchanged the truth about God for a lie and worshipped and served the creature rather than the Creator, who is blessed forever” (Rom 1:24).

Once again Vienna, the glorious capital that was able to resist the advance of the Ottoman Horde with the weapons of light and faith, suffers — dismayed and scandalized — yet another homoerotic and blasphemous provocation.

Gay activists, transvestites and transsexuals perform on the Cathedra of St. Stephen Cathedra, when instead they should receive from the Catholic Church the proclamation of Christ’s liberating Truth and the gift of his saving Love, freely offered to all those who, from the depths of their wounds and repentance, dare to acknowledge their need for salvation.

I join with all my heart the little flock, who are perhaps without a Shepherd but are called to gather in the Heart of the Immaculata to implore from her, through the reparative prayer of the Holy Rosary, God’s forgiveness for the offenses and outrages that have been perpetrated.

The enormity of the scandals will never diminish the Lord’s power: therefore, we have no reason to lose courage or confidence. Faced with the sinister vision of a Church that seems to want to rebuild itself against the faith and against the truth of the human person, that supports and promotes that which degrades life and causes the loss of souls, we wish to redouble our faith and tirelessly implore the Immaculate Mother of God and our true Mother: Vitam praesta puram, iter para tutum, ut videntes Iesum semper colletemur. Keep our life all spotless, make our way secure, till we find in Jesus, joy for evermore (Ave Maris Stella).

By teaching us to gaze on Jesus, the Virgin Mary enables us to persevere in the faith as an “Acies ordinata, a deployment of militant, suffering and triumphant souls, united to affirm the honor of the Church, the glory of God and the good of souls. Enlistment is open” (Roberto de Mattei).

As we prepare to cross the threshold of a new liturgical year, St. Bernard places in our hearts and on our lips the words of our unshakable hope, and our certain faith, as our hearts open to the ardor of Christ’s charity, the only remedies against the advance of iniquity: “Even now, let us celebrate with all our hearts the coming of Our Lord Jesus Christ… He came not only to us, but for us… The greatness of the grace he has given us shows us the poverty of our need. We judge the severity of our illness from how much it costs to heal it… The coming of the Savior is therefore necessary. The state of man makes His Presence indispensable. May the Savior come soon!”