“The ‘living man’ intended by Irenaeus is Christ himself, in whose life we believers contemplate the Father’s glory revealed in the Son.” —Fr. Patrick Henry Reardon, in an article about the phrase of St. Irenaeus published several years ago in Touchstone magazine (link). 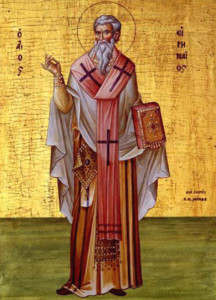 These words of St. Irenaeus are the words I put at the end of each of these Letters.

They form an endless spiral circle — from the highest reality (God) and the splendor of the highest (His glory), to humanity, men and women, what we are, to men and women living, then folds back again, by explaining that our living is not what we usually think it is, but ultimately, and only, the vision of the highest, that is, of God.

Man is that being who can see the highest, yes, the highest of all realities, and that fact is his greatest gift, and constitutes, in fact, his very life.

So, if we lose that vision, or close our eyes to it, or forget what we have seen, then, sadly, we die.

And the mission of the Church, the mission of Christ, is to maintain this vision, to offer it, to defend it, to be reminders to all of its reality, and from this come living men and woman, who heal the earth, and each other, and constitute the glory of God.

In a certain sense, I have grown weary of writing about certain Church and Vatican affairs — financial improprieties, abusive behaviors, institutional coverups. Such things reveal clearly the fallen state of man, his weakness, his tendency to choose the low road, the road that leads downward to frustration and death. But the Church is more than this.

So, as we approach Christmas 2019, and I finish an important project which has occupied me for some time, a project which may find some echo in the discussions about our Church during 2020 and beyond, I felt I should “shift gears” and try to probe the meaning of the words of St. Irenaeus: “The glory of God is man alive, but the life of man is the vision of God.”

The essence of it may be this: we have forgotten Him.

The whole meaning of the Church is to carry on the work of Christ, which was to save men and women from the frustration and misery of sin.

He healed people, and many were astonished and grateful.

But He also, and more importantly, forgave sins, earning the enmity of the scribes and Pharisees, who said it was blasphemy that a mere mortal pretended to have the authority, the holiness, to forgive sins.

And so He was arrested, and condemned to death, and crucified.

This happened because he did what only God, only a transcendent being, a holy being, can do: forgive sins — absolve sins, allow people to begin again without that intolerable weight that suffocates the soul and strips it of all joy… if the sin is repented of, and… if there is a desire to amend one’s life.

And so we remember Him, and celebrate His birth in this Christmas season, that is, we remember Christ, the man alive who was God’s glory, the true man whose whole life came from the vision of God, so that every word and action was informed by that vision, every step taken was taken in the light of that vision…

An editorial published by Touchstone magazine in 2012 (link) discusses some issues concerning the phrase of St. Irenaeus.

It is written by Father Patrick Henry Reardon, an Antiochian Orthodox priest.

It may provide some insight to the meaning of St. Irenaeus’s words, and for that reason I include the text below….

Irenaeus Did Not Teach Self-Fulfillment

Reviewing conversations with Christians over the past half-century or so, I am impressed by how often I have heard quoted a line from Irenaeus of Lyons: “the glory of God is man fully alive.”

Normally it would be encouraging to hear a wide variety of Christians quoting a second-century church father and martyr, especially so prolific and effective an opponent of every heresy that plagued the churches of his day. But in the case of this quotation, its popularity arises from a radical misreading, and this misreading explains a lot about what is wrong with American Christianity at present.

How did this come about? The greater part of Irenaeus’s largest work, A Treatise Against the Heresies, is devoted to the refutation of second-century Gnostic writers, whose philosophical and religious speculations may strike the modern reader as bizarre beyond consideration.

Yet, Irenaeus took those fellows seriously; he studied their writings in depth and refuted them in meticulous and painstaking detail.

Regarding Gnosticism as spiritually dangerous to the Christian souls for whom he was responsible, he fulfilled that task of refutation with self-sacrificing pastoral love.

Irenaeus is not easy to read straight through; at least, I have found this to be the case.

When I finished my first complete reading of the AdversusHaereses several decades ago, my chief sentiment was admiration for the author’s patience in studying, and then refuting, so much theological nonsense.

Because the lunacy of his opponents makes many pages of Irenaeus a bit tedious—especially in the first half of the work—it has occurred to me to wonder, from time to time, whether all those who quote Irenaeus have actually read him.

This impression comes with special force when I consider that the alleged quotation—”the glory of God is man fully alive”—doesn’t appear until fairly late in the Adversus Haereses; it is found in the middle of book 4, chapter 20.

Unfortunately, the original Greek text of that passage was not preserved, so we know it only in ancient translations, the most important being Latin. This is where we have to start.

The traditional Latin of the quotation cited above reads, “Gloria Dei est vivens homo.” The literal translation is, “the glory of God is a living man.”

And here arises a problem. The popular translation, “man fully alive,” seems to indicate that God is glorified in what today would be called “human fulfillment” or “self-fulfillment.”

Indeed, whenever I have heard these words cited, this has always been, I believe, the intended sense of the person citing them.

And such an understanding of Irenaeus—I am about to insist—is disingenuous and misleading at best.

Irenaeus is not talking about “human fulfillment.”

Nonetheless, this mistranslation is so prevalent that we find it in places where its use can only be regarded as deceptive, even mendacious.

I cite one example, the English translations of the Catechismus Catholicae Ecclesiae.

The original Latin of this Vatican document (#294) accurately quotes the traditional text of Irenaeus and then goes on to explain that it refers to the life of the Word Incarnate.

That is to say, the “living man” intended by Irenaeus is Christ himself, in whose life we believers contemplate the Father’s glory revealed in the Son.

“Vita hominis visio Dei,” Irenaeus goes on to say; “the life of a man is the vision of God.”

In the life of the man Jesus, believers behold the glory of God shining on the face of his Son.

The Vatican document has it right, but both English versions (1992 and 1997) reflect an unfortunate and skewed reading of Irenaeus.

The Cult of Self-Fulfillment

Is this an important matter?

The English expression “man fully alive” conveys an idea radically alien to the teaching of Irenaeus, who declared that “the revelation of the Father, which comes through the Word, conveys life to those who contemplate God.”

The vague “man fully alive,” which can mean almost anything, usually means a quest for human fulfillment or self-expression.

As commonly quoted, the words “man fully alive” have nothing to do with the life of Jesus Christ.

And that is the basis for my suspicion that the popularity of this quote is evidence of a capitulation of Christians to a cult of self-fulfillment and self-expression.

For many, indeed, our churches have become merely self-improvement societies, where the ancient creedal affirmations about Christ—those derived from the New Testament—have been decisively excised from worship and hymnography.

A subjective quest for emotional fulfillment subverts Christian worship by focusing on how worship makes a person feel, and by encouraging worship schemes that arise from individual self-expression rather than the lived history of the people of God down through the ages.

“Man fully alive” is at the heart of that most baneful of cultural deviations, the circus act known as “the contemporary worship service.”

This cult of self-fulfillment also preaches false notions of happiness.

It encourages an unwarranted autonomy among children, and thus lessens their dependence on the inherited cultural and moral standards available in traditional family life.

Among the clergy, whose sniveling acquiescence has been essential to this religious and cultural decline, the religion of Jesus Christ can be used for the exercise of power, the building of one’s ego and reputation, and the search for personal stroking that indicates narcissism.

The modern quest for self-fulfillment also means the loss of the founding dogma that places Jesus Christ at the heart of every believer’s adherence, worship, devotion, longing, and emulation.

It means the rise of self-improvement sermons and the declension of Christo-centric preaching that initiates believers ever more deeply into the Mystery of Christ.

The suggestion that God is glorified by a widespread human quest for self-fulfillment—the notion that God is actually pleased by cultural and societal expressions of radical selfishness—flies in the face of everything Irenaeus held dear.

He was ever attentive to the voice from heaven that proclaimed, “This is my beloved Son, in whom I am well pleased.”

It will be obvious to everyone who has read it, I think, that this is the substance of the Adversus Haereses.

The only “alive” Irenaeus would recognize is in the life of divine grace, incorporation in the living Christ, the sole Mediator of salvation.

According to Irenaeus and the other authentic fathers, the only true self-fulfillment—if we must use such a term—is to be sought in obedience to the lordship of, and communion with, the living Christ.

Genuine fulfillment of self is expressed in forgetfulness of self and in the love of others exemplified by the Savior of the world.

Finally, if Irenaeus were writing today, I have no doubt he would include the modern quest for self-fulfillment among the heresies he chose to refute.

Patrick Henry Reardon is pastor of All Saints Antiochian Orthodox Church in Chicago, Illinois. He is the author of Christ in the Psalms, Christ in His Saints, and The Trial of Job (all from Conciliar Press). He is a senior editor of Touchstone.