On November 2, Feast of All Souls, Pope Benedict XVI visited the tombs of several of his predecessors, including Benedict XV, who tried and failed to limit the First World War, in order to pray

VATICAN CITY, TUESDAY, November 2, 2010 (VIS) — As is traditional on All Souls Day, at 6 p.m. today Benedict XVI went down to the grottos of the Vatican Basilica to pray privately for the Popes buried there, and for all the deceased.

A silent video of the Pope praying is available from RomeReports. I find it moving. I recommend taking the 80 seconds to view it.

The silent video of the Pope in prayer at the tombs of his predecessors is available by clicking on the image above, or here: http://www.romereports.com/palio/Benedict-XVI-visits-tomb-of-John-Paul-II-and-other-Popes-english-2980.html

The Pope first visited the tomb of St. Peter, which is directly beneath the main altar in St. Peter’s Basilica.

The Church has every reason to believe that the actual bones of the disciple who denied Christ three times are preserved in an ancient stone box some 50 feet below the altar, where Peter was buried after his execution a few yards away under the Emperor Nero.

In the first moments of the video, Benedict is walking along a corridor beneath the main altar of the Basilica, followed by his Master of Ceremonies, Monsignor Guido Marini. He distributes holy water to  those nearest him, including Cardinal Angelo Comastri, archpriest of St. Peter’s Basilica (wearing his red cardinal’s cap). Archbishop James Harvey, the Prefect of the Pontifical Household, is visible under the archway. 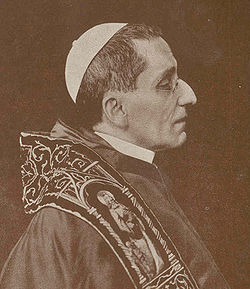 After praying before St. Peter’s tomb, the Pope prayed at the tomb of Pope Benedict XV — the tomb with a marble carving of the Pope lying in repose.

Benedict XV (photo) was the Pope who inspired Joseph Ratzinger to take the name Benedict.

For this reason, it is worth considering, for a moment, what Benedict XV did, since Benedict XV is in some way a “model” for this present Pope.

Benedict XV became Pope on September 3, 1914 — two days after the beginning of World War I, the greatest war the world had ever seen up to that time.

Giacomo Paolo Giovanni Battista Della Chiesa was at the time just 60 years old. The cardinals knew the war had just begun, and by choosing Della Chiesa, they made plain their desire for another long-lasting pontificate, well aware that the pontificates of Pius IX (1846-1878) and Leo XIII (1878-1903) had each lasted a quarter century or more.

But Benedict was to live for only eight years.

Benedict called World War I “the suicide of civilized Europe.” By consequence, if “civilized Europe” committed “suicide” during the years 1914-1918, what we have since is something different — uncivilized Europe, perhaps, or of something that is not Europe at all, since it died of self-inflicted wounds in those years, almost a century ago now.

And now, a question, a question which comes to my mind after praying and meditating about the attacks on the Syriac Catholic church in Baghdad on Sunday evening, and thinking of the so-called “clash of civilizations” which seems destined to mark the rest of the 21st century, unless we can escape this fate: will we in our time — the time of a new Pope Benedict — perhaps be witnesses to something just as tragic, but on an even larger scale: “the suicide of the civilized world”? And can this Benedict prevent what the other Benedict failed to prevent?

The war and its consequences were the main focus of Pope Benedict XV. Having declared the neutrality of the Holy See — the necessary presupposition for any party to act as an acceptable intermediary between two warring sides — Benedict XV attempted to mediate peace in 1916 and 1917.

Both sides rejected his initiatives.

The Pope then focused on humanitarian efforts to lessen the impacts of the war, such as assisting prisoners of war and the exchange of wounded soldiers.

I myself have seen, in the Vatican Secret Archives, hundreds of yards of shelves containing letters from mothers from all over Europe, writing to the Pope asking for assistance in finding out if their sons have been captured, wounded or killed.

And the Pope, and his staff, replied, giving what information they could.

Benedict did something else of note: in 1917, he issued the Code of Canon Law of the Catholic Church. He had worked to prepare this important work along with Pietro Gasparri and Eugenio Pacelli (the future Pope Pius XII) during the pontificate of Pius X.

Benedict named Gasparri to be his Cardinal Secretary of State and personally consecrated Nuncio Eugenio Pacelli on May 13, 1917 as archbishop — the very day of the first Marian apparition in Fatima, Portugal.

Benedict’s last concern was the emerging persecution of the Church in Soviet Russia — the communists had just taken power form the Czar — and the famine there after the revolution.

Benedict was an ardent mariologist, devoted to Marian veneration and open to new perspectives of Roman Catholic Mariology. He authorized the Feast of Mary Mediator of all Graces.

Pope Benedict XV died on January 22, 1922, after just over seven years in office, having failed to prevent Europe’s “suicide” due to war.

Benedict then went to the tomb of Pius XI, who was Pope when Joseph Ratzinger was a child.

Benedict also visited the tombs of Pius XII, Paul VI, John Paul I, and John Paul II. The tomb of John XXIII (1958-1963) is inside the basilica, but not in the crypt.


The Priests Who Help the Pope

At the following link, there is historical and up-to-date information about the office of papal ceremonies: http://www.vatican.va/news_services/liturgy/documents/ns_liturgy_20090924_profile_en.html

The head of the office is Mons. Guido Marini, Master of Apostolic Ceremonies.

The other Papal Masters of Ceremonies are (photo):

An Oddity about the Numbering of Popes Named “Benedict” 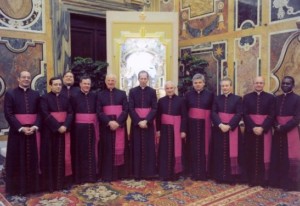 This is a bit of strange history, so take a deep breath…

Pope Benedict X, who reigned 1,000 years ago, is now considered an antipope.

In other words, there has never been a legitimate Pope Benedict X.

At the time, however, this was not recognized, so the Pope the Roman Catholic Church officially considers the 10th true Pope Benedict took the official number “XI,” rather than “X.”

This has advanced the numbering of all subsequent Popes Benedict by one.

(Here is the Wikipedia entry on the Antipope Benedict X:

Pope/Antipope Benedict X (reigned 1058–1059; died ca. 1073 or 1080), was born John Mincius, and later became Cardinal Bishop of Velletri. He was elected in 1058, his election having been arranged by the Count of Tusculum. However, a number of Cardinals alleged that the election was irregular, and that votes had been bought; these cardinals were forced to flee Rome. Hildebrand, later Pope Gregory VII (1073–85), had been sent by the late Pope Stephen IX (1057–58) to the court of Empress Agnes (mother and regent for Emperor Henry IV, then a minor), who had questioned the validity of Stephen IX’s election. When, on his return to Rome, he heard of Benedict X’s election, he decided to oppose it, and obtained the support of the Duke of Lorraine-Tuscany and Empress Agnes for the election of Gerhard of Burgundy, Bishop of Florence, as Pope instead. Those cardinals who had opposed Benedict X’s election met at Siena in December 1058, and elected Hildebrand’s candidate as Pope, who then took the name Nicholas II (1059–61).
Nicholas II proceeded towards Rome, along the way holding a synod at Sutri, where he pronounced Benedict X deposed and excommunicated. The supporters of Nicholas II then gained control of Rome, and forced Benedict X to flee to the castle of Gerard of Galeria. Having arrived in Rome, Nicholas II then proceeded to wage war against Benedict X and his supporters, with Norman assistance. An initial battle was fought in Campagna in early 1059, which was not wholly successful for Nicholas II; but later that same year, his forces conquered Praeneste, Tusculum and Numentanum, and then attacked Galeria, forcing Benedict X to surrender and renounce the Papacy.
Benedict X was then allowed to go free, and he retired to one of his family estates; but Hildebrand then had him imprisoned in 1060 in the hospice of St. Agnese, where he died, still a prisoner, sometime around 1073 or 1080.
The most important consequence of the affair of Benedict X was the adoption of new laws on papal elections, at a synod hosted by Nicholas II in the Lateran Palace at Easter 1059.)

A Visit to the Consistory

Inside the Vatican has organized a small pilgrimage to attend the November 20 consistory in Rome. We have two places still open. If you wish for more information about this visit, please email [email protected] or call 904-699-0960. If you have ever wished to visit the Vatican, consider joining us for the Consistory.

A Talk by Dr. Robert Moynihan about the “Old Mass”

This talk gives a 2,000-year history of the Mass in 60 minutes which is clear and easy to understand. The talk covers questions like:

— Does the motu proprio overcome some of the liturgical confusion since Vatican II?
— Who was Annibale Bugnini?

— The mind of Pope Benedict: How can the Church restore the sense of the presence of God in the liturgy?

The newsflash is free, but there are costs associated with producing it. To support this writing, you may call our toll-free number in the USA, 1-800-789-9494, or click here:

“Inside the Vatican is a magazine I read cover to cover. I find it balanced and informative. I especially appreciate its coverage of art and architecture. It is not only an important magazine, it is also a beautiful one.” —Prof. Mary Ann Glendon, Harvard University Law School, former United States Ambassador to the Holy See