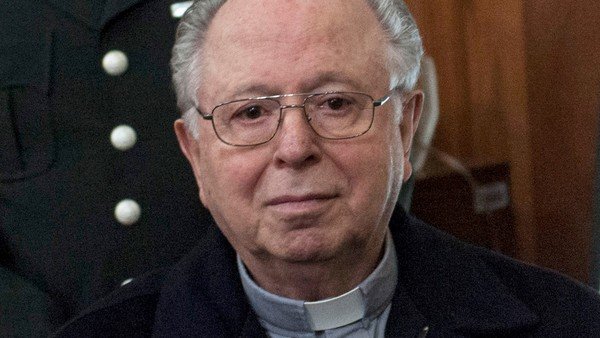 Fernando Karadima, the prominent Chilean priest who was defrocked in 2018 after a Church trial found he had abused young people sexually, has died.

Karadima was a highly influential Santiago-area priest who for decades led a vibrant lay Catholic movement from his parish in El Bosque.

He is said to have personally fostered some 40 (or more) vocations to the priesthood, and some of these men became bishops.

Karadima himself denied the allegations of sex abuse.

He never faced a trial under Chilean law for his alleged crimes because of the statutes of limitations. He was convicted in a Church court and was later laicized.

On a 2018 visit to Chile, Pope Francis publicly contended it was “calumny” to claim Karadima’s protégé Bishop Juan Barros had collaborated in abuse. The Pope said he had seen no evidence of this.

After drawing rebukes, Francis apologized to Karadima’s victims and ordered an investigation of the matter.

Francis then said he had been misinformed, sought a meeting with some victims, and demanded that scores of Chile’s bishops submit their resignations to him.

(link to a Catholic News Agency story on these matters)

Here below is a report on the death last night in Chile of one of the most influential, controversial and ultimately tragic figures in the Church in Chile in recent decades, Fernando Karadima.

And here is a link to an AP story on the man.

A key element in this story is that Father Karadima was so greatly admired by so many for so long that no accusations against him were taken seriously for decades.

By all accounts, he was an eloquent, inspiring priest, so, a man of great gifts who in his private life was judged to have been guilty of terrible sexual abuse of young people.

Fernando Karadima, the Chilean priest expelled from the Church for sexual abuse, died

Fernando Karadima, the Chilean priest convicted and expelled from the Catholic Church for sexual abuse, died on Sunday night, July 25, at the age of 90.

The priest died in the Hogar San Juan de Dios after suffering a bronchopneumonia, with kidney failure, diabetes and hypertension.

Karadima, an influential Jesuit who for decades sexually abused children and adolescents and was expelled from the Church in 2018, had been admitted to a Santiago hospital in early June for a heart condition.

The case of Karadima is one of the most emblematic in the trans-Andean country with respect to the denunciations of sexual abuse committed within the Catholic Church.

He was condemned by canonical means in 2011 to a life of reclusion and penance and, more than five years later, the Chilean Justice sentenced the Archdiocese of Santiago to pay millions in compensation to his victims.

Since the priest was denounced in 2010, the Chilean Church received dozens of complaints of abuse and recently the congregation of the Jesuits of Chile recognized that 64 people were victims of this type of crime.

According to data from the Prosecutor’s Office, in 2019 there were 166 cases opened for sexual crimes by the clergy to 248 victims, of whom 131 were minors.

With information from EFE

And here is another report from Chile Today.

Fernando Karadima died in a retirement home on Monday, July 26 [Note: this seems to be incorrect; other, reliable reports say he died on Sunday, July 25], in the same municipality where he committed his alleged crimes. The Chilean priest became the face of a massive sexual abuse scandal that rocked Chile. He was forced into retirement by the Church, but never spent a day behind bars.

The 90-year-old Karadima was spending his last days in a retirement home in the El Bosque municipality. Several weeks ago, he was admitted to the hospital with severe lung problems due to a coronavirus infection.

Karadima was the eye of the storm of a sexual abuse scandal that rocked the Chilean Catholic Church for several years, and that allegedly included cover-ups from the highest ranks of the Church.

The initial allegations of sexual abuse of minors by Karadima and others surged in the 1980s.

However, then-Archbishop Juan Francisco Fresno Larraín and several bishops did not take any steps to try to stop it or even to investigate.

However, no actions were ever taken against the priest until 2010, when four of his victims stepped forward and made their accusations public, causing the Chilean Public Ministry to launch its own investigation into the priest.

A parallel investigation, conducted by the Catholic Church, followed, after attorneys and public investigators denounced the problems they were facing in the higher courts of Santiago, due to what they called “entanglement of power,” with State sectors working with the Church to avoid criminal prosecution of the priest.

The investigation by the Church ultimately found the accusations credible and the Vatican convicted the priest and sentenced him to a life of “prayer and penance.”

In the aftermath of the conviction, several other priests, bishops, and even Archbishop Ricardo Ezzati, resigned or were withdrawn from their posts due to their role with respect to the sexual abuse by Karadima: they either knew about the abuse, participated in it, or helped cover it up.

The Karadima case became worldwide news due to the roles the State and the Church played in cover-ups and avoiding prosecution. After Karadima’s death on Monday, many pointed to the fact that the ex-priest spent his final years in a Santiago retirement home, not prison.

The four victims who started the criminal case in 2010 released a forward-looking statement: “Everything we have to say about Karadima has been said. He was one more link in this culture of perversion and cover-up in the Church. We are at peace and we are only moved to continue fighting so that these crimes do not happen again.”

Boris van der Spek: Editor-In-Chief Boris van der Spek is the founder of Chile Today. He worked in Colombia, Surinam and the Netherlands as reporter and works with international media during major events, like the social crisis, the elections and the Pope’s visit.

Here are two paragraphs from a Wikipedia biography on Karadima:

Fernando Karadima (born 6 August 1930) was a spiritual leader and father figure for young men from Santiago’s social elite. He was based in the “Parroquia El Bosque,” which serves some of Santiago’s wealthiest and most influential families.

His connections extended to officials in the military dictatorship of Augusto Pinochet and to the papal nuncio to Chile, Angelo Sodano, who became a cardinal and Vatican Secretary of State in 1991.

Karadima was a dynamic leader, described as “Impeccably dressed and with perfectly groomed nails and slicked-back hair,” who “cut an aristocratic figure, appealing to both young and old in Chile’s elite.”

He trained 50 priests and several bishops.

In 1984 a group of parishioners reported “improper conduct” on the part of Karadima to Juan Francisco Fresno, Archbishop of Santiago de Chile.

One of them later told a court that he learned that their letter was “torn up and thrown away.” Fresno’s secretary at the time was one of Karadima’s protégés, Juan Barros.