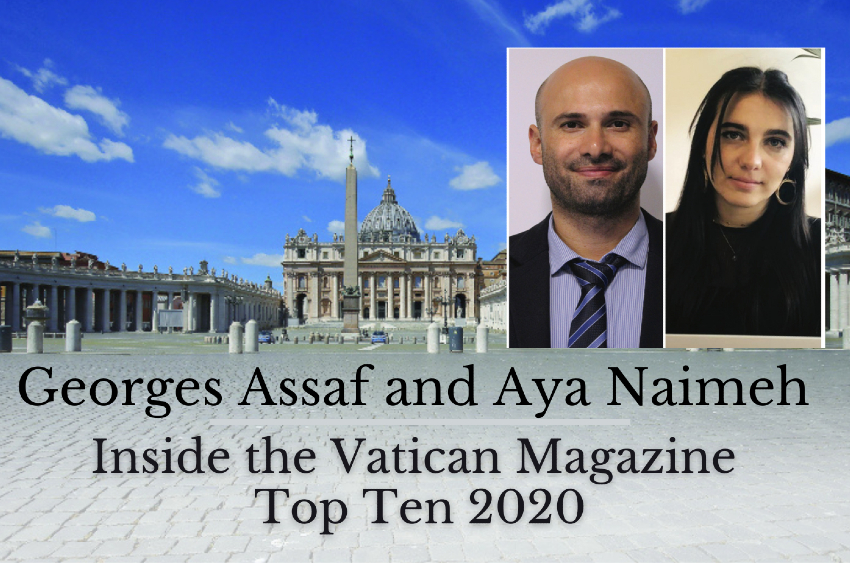 Born in Beirut, Lebanon in the mid-200s, Pamphilus died today, February 16, in the year 309, executed as a martyr under the Diocletianic persecutions. He was the most renowned Biblical scholar of his generation and a great devotee of the brilliant but sometimes controversial theologian Origen, who lived from 184 to 253 AD.

St. Pamphilus (Greek: Πάμφιλος; mid-200s to February 16, 309), from Berytus (Beirut), in Phoenicia, studied in his native city and then at the famed Catechetical School of Alexandria, where he was taught by Pierius, a student of Origen. Ordained a priest in Caesarea, Pamphilus became the head of a catechetical school there, and soon acquired a reputation for learning, biblical study, and the size and brilliance of his library. One of the students at his school was the historian Eusebius of Caesarea who held Pamphilus in such high regard that he adopted the name Eusebius of Pamphilus. Eusebius’ Martyrs of Palestine attests that Pamphilus was of a rich and honorable family of Beirut. This work also asserts that he gave all his property to the poor and attached himself to the “perfect men.”

Photius quotes Pamphilus’ Apology for Origen to the effect that Pamphilus went to Alexandria, where his teacher was Pierius, the head of the famous catechetical school there, before settling in Caesarea Maritima in Palestine, where he was ordained a priest. In Alexandria, Egypt, Pamphilus became devoted to the works of Origen of Alexandria.

According to Eusebius, Pamphilus suffered martyrdom in the third year of the Diocletianic persecution, after spending two years in prison. While in prison, Pamphilus and Eusebius, who was also arrested, worked together on five books in defense of Origen.

The Diocletianic persecution began in earnest in the year 303. In 306 a young man named Apphianus — a disciple of Pamphilus — “while no one was aware; he even concealed it from us who were even in the same house”— interrupted the governor in the act of offering sacrifice, and paid for his boldness with martyrdom. His brother Aedesius, also a disciple of Pamphilus, suffered martyrdom about the same time at Alexandria under similar circumstances.

St. Pamphilus was arrested in November, 307. He was brought before Urbanus, the governor of Palestine, and upon refusing to offer sacrifice, was cruelly tortured, and then relegated to prison. In prison he continued copying and correcting manuscripts. He also composed, in collaboration with Eusebius, an Apology for Origen in five books, which Eusebius edited and to which he added a sixth book. St. Pamphilus and other members of his household, along with Valens, deacon of the Church of Jerusalem and Paul of Jamnia, men “in the full vigour of mind and body,” were without further torture sentenced to be beheaded in February, 309. While sentence was being given, a youth named Porphyrius — “the slave of Pamphilus,” “the beloved disciple of Pamphilus,” who “had been instructed in literature and writing” — demanded the bodies of the confessors for burial. He was cruelly tortured and put to death, the news of his martyrdom being brought to Pamphilus before his own execution. Nearly at the same time another of his companions, Patriklos, suffered a martyr’s death in Caesarea and was later interred after the payment of a ransom to Diocletian in Cappadocia.

St. Pamphilus is regarded as a saint by the Roman Catholic Church and the Eastern Orthodox Church. In the context of this Letter, it seems appropriate that we recall Pamphilus as we speak about two young Lebanese Christians living under difficult conditions in the Lebanon of our own time. 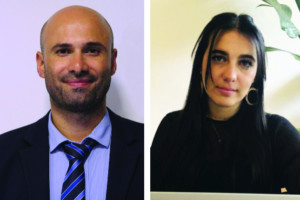 Organizers of relief for homeless in Lebanon

“Of course, helping people is always a joy”

Lebanese Young Talents began in 2009 as an organization whose mission was to raise funds for young Lebanese students without means to pursue athletics at the college level. Maronite Catholics Georges Assaf, a lecturer and head of sports training at Lebanon’s Catholic Antonine University, and Zeina Mina, Dean of the Faculty of Sports Sciences and a former Olympic athlete (Lebanon’s sole female Olympian, who competed in the Women’s 400 meter race in Los Angeles in 1984) were the founders.

After years of successfully raising money for young Lebanese to enter and compete in sports, something terrible happened that turned everything around for them: the Beirut blast of August 4, 2020.

The explosion, a detonation of 2750 tonnes of ammonium nitrate – equivalent to about 1.1 kilotons of TNT – stored unsafely in a warehouse in the port of Beirut, Lebanon, was felt in Turkey, Syria, Israel, Palestine and parts of Europe – and heard in Cyprus, 150 miles away. It registered 3.3 on the Richter scale.

It left more than 200 dead, thousands injured, and 300,000 homeless. And a majority of these casualties occurred in the Christian section of Beirut, where the warehouse was located.

Georges, Zeina, Zeina’s daughter Aya Naimeh, and Fr. Joe Abou Jaoudé, the financial Director at Antonine International School whom Aya calls a “mentor” to the group, at that time decided to redirect the work of Lebanese Young Talents to relief efforts among the survivors of the blast.

Says Aya, “I was always raised around the value of helping others, so at a young age I started enrolling in activities that were other-focused, such as donating gifts and clothes and food to an orphanage in Beirut. I was educated in a Catholic school in Beirut, Notre Dame de Nazareth, where these values were reinforced.” 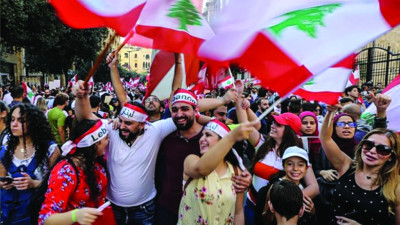 Right after the August 4 explosion, the group started traveling the devastated streets, helping people to clear their neighborhoods and homes of rubble. They gradually were joined by friends, coworkers, students from the university and, says Aya, “random people who had heard what we were doing and decided to join the cause.”

“For us, it only seems natural to devote our time and funds to helping people,” says Aya. “This is the way we were all raised, as good Christians: ‘Give to the one who asks you, and do not turn away from the one who wants to borrow from you.’ (Matthew 5:42)”

“Of course, helping people is always a joy,” she continues. “For me, one of the most joyful moments was when we found Georges, a 62 year old man who lives alone in his apartment in Gaitawi… It wasn’t the fact that he survived by a miracle when his carpet protected him from debris and flying glass; it was the hope in his eyes, even though he was confused, not knowing whether to be angry or happy he survived, having a guilt that we all could relate to! We found him alone, not asking for help from anyone, just sitting in his destroyed apartment with no food, no lights, no water, nothing.”

Besides the destruction and human suffering around them, the young Catholic Lebanese see another sorrow as well: the exodus of Christians from a homeland where the Lord Himself once walked.

Indeed, an archeologist in 2019 identified Qana, Lebanon, as the “Cana” of the Gospel, where Jesus turned water into wine at a wedding celebration.

Aya says she, her Orthodox husband and Georges Assaf have witnessed many Christian friends leave the country in search of stability, “away from the political and economic problems.”

“We knew that was always an issue in Lebanon. I myself was born and lived in France when I was younger as my mother was fleeing the war in Beirut in 1989,” she explains.

But this time I feel it is different – we have almost no friends left in Lebanon, and those who are left are thinking of leaving the country in pursuit of better days.”

(Note: To help Georges and Aya support the Lebanese people as they recover from the August 4, 2020 explosion in the Beirut harbor, and to help the country’s young Christians in general to stay in their country rather than seek, due to many hardships, to emigrate out of Lebanon, you may donate at the following link: Help support Lebanon’s young people.)