Noting Cardinal Marx’s reference to the crisis of the Church in Germany, Pope Francis said that “the whole Church is in crisis because of the abuse issue” and the only fruitful path is “to assume the crisis, personally and communally.” 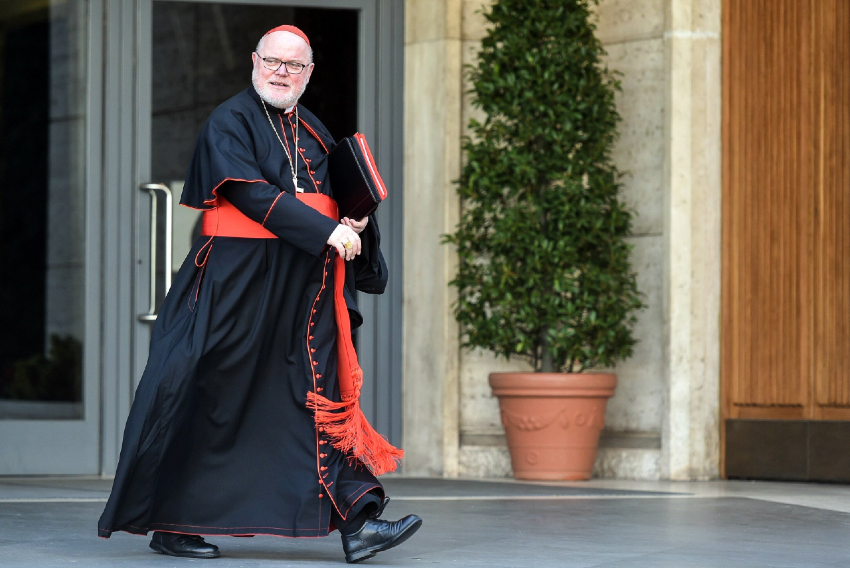 In a June 10 letter, the Pope asked the influential German cardinal to continue as archbishop of Munich and Freising.

Writing in Spanish, Pope Francis told Cardinal Marx: “If you are tempted to think that, by confirming your mission and not accepting your resignation, this Bishop of Rome (your brother who loves you) does not understand you, think of what Peter felt before the Lord when, in his own way, he presented him with his resignation: ‘Depart from me, for I am a sinner,’ and listen to the answer: ‘Shepherd my sheep.’”

The 67-year-old cardinal is a member of the Pope’s Council of Cardinals and the coordinator of the Vatican Council for the Economy. Until last year, he served as the chairman of the German bishops’ conference.

Cardinal Marx sent a letter to Pope Francis May 21 outlining his reasons for seeking to resign from office.

The archdiocese of Munich and Freising published the cardinal’s letter to the Pope and personal declaration on June 4 in German, English, and Italian.

Cardinal Marx wrote: “Without doubt, these are times of crisis for the Church in Germany. There are, of course, many reasons for this situation — also beyond Germany in the whole world — and I believe it is not necessary to state them in detail here.”

“However, this crisis has also been caused by our own failure, by our own guilt. This has become clearer and clearer to me looking at the Catholic Church as a whole, not only today but also in the past decades,” he continued.

“In essence, it is important to me to share the responsibility for the catastrophe of the sexual abuse by Church officials over the past decades.”

In his response June 10, Pope Francis thanked Cardinal Marx for his Christian courage, which he said is not afraid of the cross or to be humbled before the reality of sin.

He also said he liked the way that the archbishop had ended his letter. Cardinal Marx wrote that he would “gladly continue to be a priest and bishop of this Church” and that he would like to dedicate his next years of service “in a more intense way to pastoral care and to commit myself to a spiritual renewal of the Church.”

“And this is my answer, dear brother,” the Pope said in his letter. “Continue as you propose, but as archbishop of Munich and Freising.”

Noting Cardinal Marx’s reference to the crisis of the Church in Germany, Pope Francis said that “the whole Church is in crisis because of the abuse issue” and the only fruitful path is “to assume the crisis, personally and communally.”

“Therefore, in my opinion, every bishop of the Church must assume it and ask himself what should I do in the face of this catastrophe?” he said.

The Pope added that the “mea culpa” the Church has offered in the face of past failures must be taken up again today.

“We are asked for a reform, which — in this case — does not consist in words but in attitudes that have the courage to put themselves in crisis, to assume the reality whatever the consequences may be. And every reform begins with oneself,” he said.

Pope Francis suggested there was an urgent need to “air out” the Church from the reality of abuse and how it has been handled.

“Let the Spirit lead us to the desert of desolation, to the cross, and to the resurrection,” he said. “It is the path of the Spirit that we must follow, and the starting point is humble confession: we have made a mistake, we have sinned.”

He said: “We will not be saved by the prestige of our Church, which tends to conceal its sins; we will not be saved by the power of money or the opinion of the media (so often we are too dependent on them). We will be saved by opening the door to the Only One who can do it and confessing our nakedness: ‘I have sinned,’ ‘we have sinned’… and weeping, and stammering as best we can that ‘depart from me, for I am a sinner,’ a legacy that the first Pope left to the popes and bishops of the Church.”

In his letter to the Pope, Cardinal Marx, who has served as archbishop of Munich and Freising since 2007, had said that he hoped his resignation would “send a personal signal for a new beginning, for a new awakening of the Church, not only in Germany.”

In April, Cardinal Marx asked German President Frank-Walter Steinmeier not to bestow the Federal Cross of Merit on him after an outcry among advocates for abuse survivors over the award.

He had been scheduled to receive the Bundesverdienstkreuz, Germany’s only federal decoration, at the Bellevue Palace in Berlin on April 30.

Cardinal Marx said that he did not want to draw negative attention to other award recipients.

In February 2020, he notified German bishops that he would not stand to be elected to a second term as chairman of the German bishops’ conference. He was succeeded in the post by Bishop Georg Bätzing of Limburg.