A New Year with St. Joseph

A New Year with St. Joseph 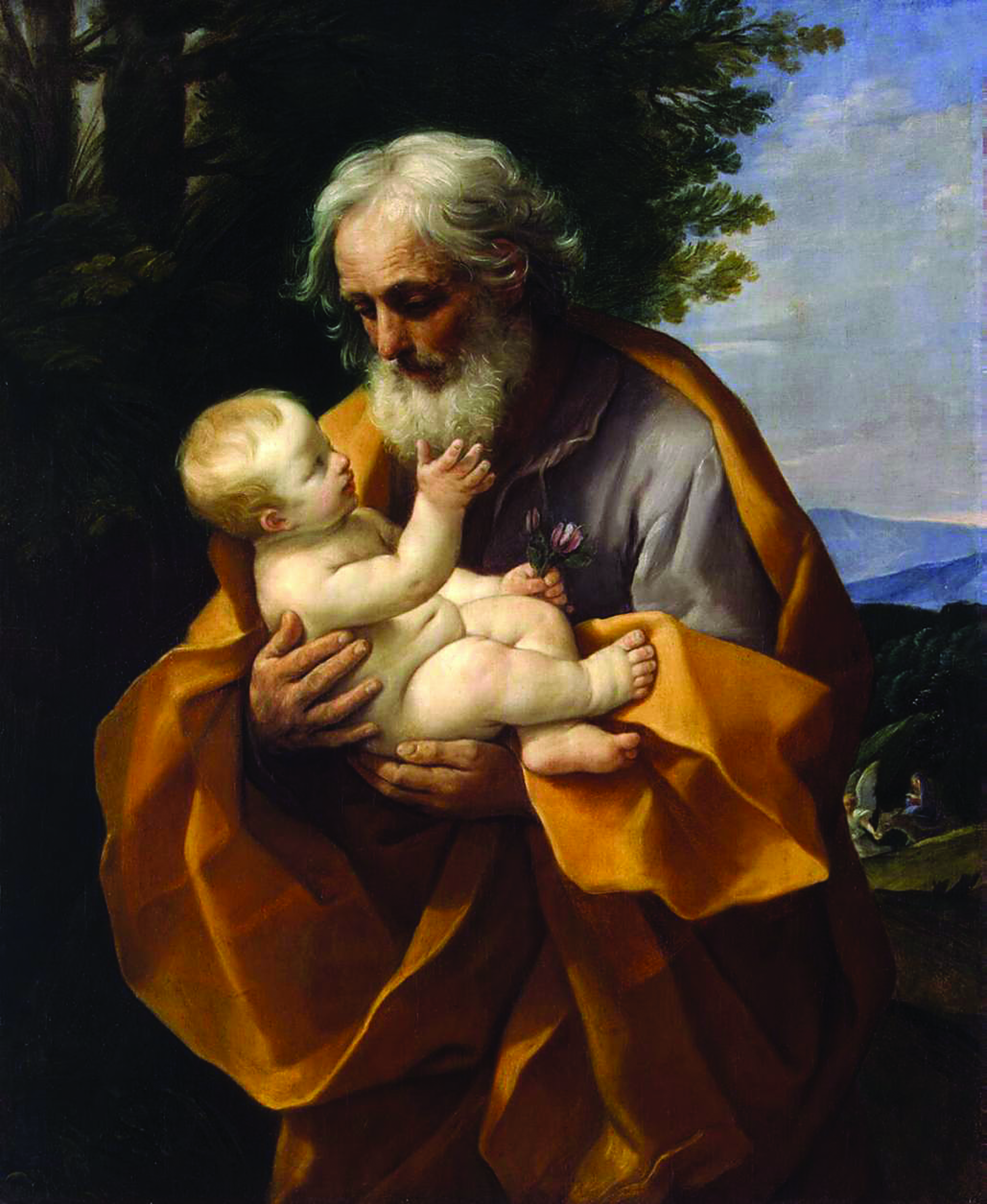 St Joseph with the Infant Jesus by Guido Reni

Pope St. Joseph Francis announced on December a Year 8 of in honor of the 150th anniversary of the saint’s proclamation in 1870 as patron of the Universal Church.

The decree said that Francis had established a Year of St. Joseph so that “every member of the faithful, following his example, may strengthen their life of faith daily in the complete fulfillment of God’s will.”

It added that the Pope had granted special indulgences to mark the year. In addition to the decree, Francis issued an apostolic letter dedicated to the foster father of Jesus.

The Pope explained in the letter, entitled Patris corde (“With a father’s heart”) and dated December 8, 2020, that he wanted to share some “personal reflections” on the spouse of the Blessed Virgin Mary.

“My desire to do so increased during these months of pandemic,” Francis said, noting that many people had made hidden sacrifices during the crisis in order to protect others.

“Each of us can discover in Joseph — the man who goes unnoticed, a daily, discreet and hidden presence — an intercessor, a support and a guide in times of trouble,” he wrote.

“St. Joseph reminds us that those who appear hidden or in the shadows can play an incomparable role in the history of salvation.”

In its decree, the Apostolic Penitentiary said that, “to reaffirm the universality of St. Joseph’s patronage in the Church,” it would grant a plenary indulgence to Catholics who recite any approved prayer or act of piety in honor of St. Joseph, especially on March 19, the saint’s solemnity, and May 1, the Feast of St. Joseph the Worker. Other days for the plenary indulgence are the Feast of the Holy Family on December 29 and St. Joseph’s Sunday in the Byzantine tradition, the 19th of each month, and every Wednesday, a day dedicated to the saint in the Latin tradition. 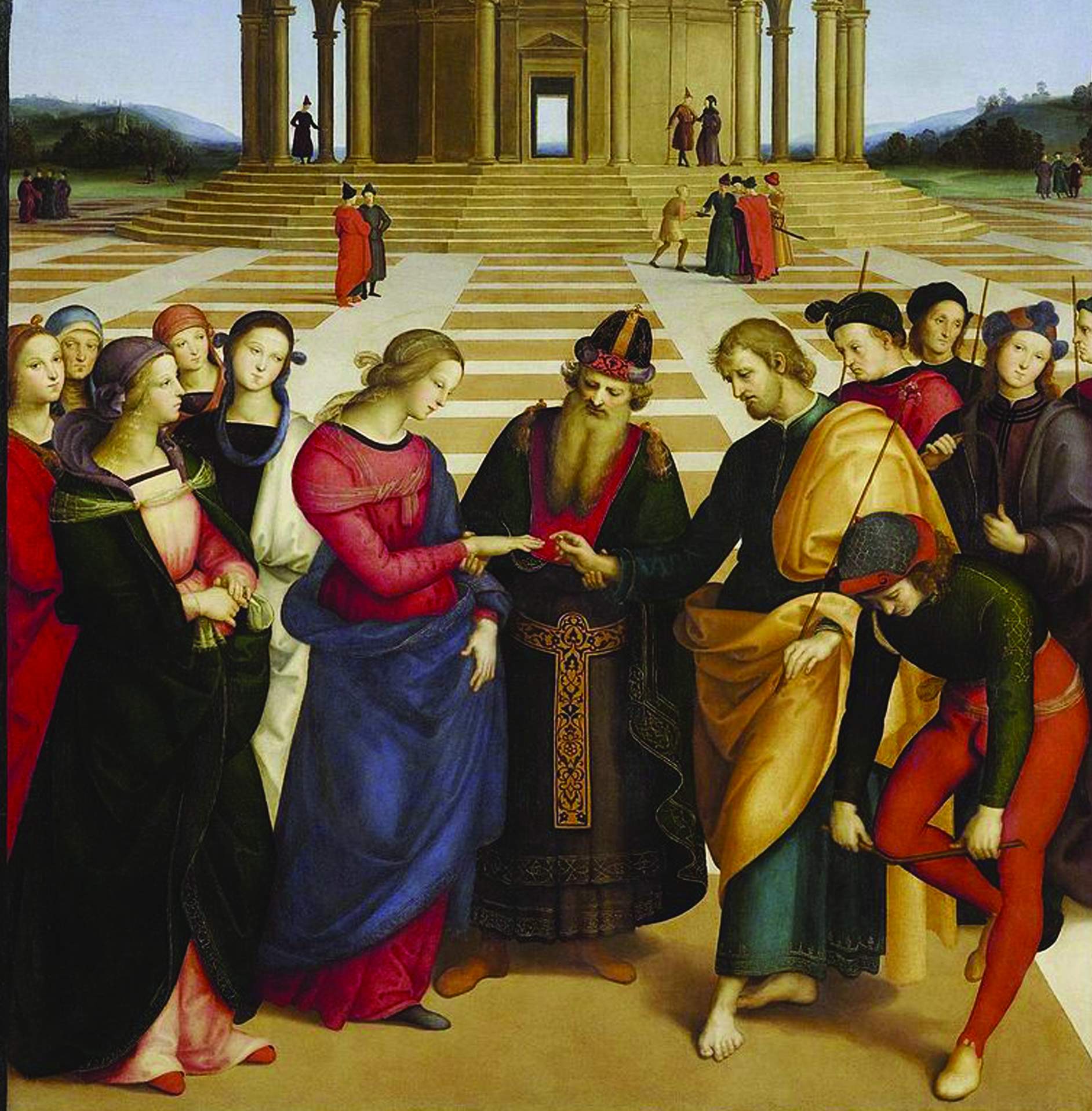 The Marriage of the Virgin by Raphael

Francis said that the contemporary world required examples of true fatherhood. “Our world today needs fathers,” the Pope wrote. “It has no use for tyrants who would dominate others as a means of pensating for their own needs,” he continued. “When fathers refuse to live the lives of their children for them, new and unexpected vistas open up.

“Every child is the bearer of a unique mystery that can only be brought to light with the help of a father who respects that child’s freedom.

“A father realizes that he is most a father and educator at the point when he becomes ‘useless,’ when he sees that his child has become independent and can walk the paths of life unaccompanied.

“When he becomes like Joseph, who always knew that his child was not his own but had merely been en-trusted to his care.”

The Pope concluded his new apostolic letter by urging Catholics to pray to St. Joseph for “the grace of graces: our conversion.”

He ended the text with a prayer: “Hail, Guardian of the Redeemer, Spouse of the Blessed Virgin Mary. To you God entrusted his only Son; in you Mary placed her trust; with you Christ became man.

“Blessed Joseph, to us too, show yourself a father and guide us in the path of life.

“Obtain for us grace, mercy and courage, and defend us from every evil. Amen.”

“This Is the Best Thing Pope Francis Has Done”

By Inside the Vatican staff 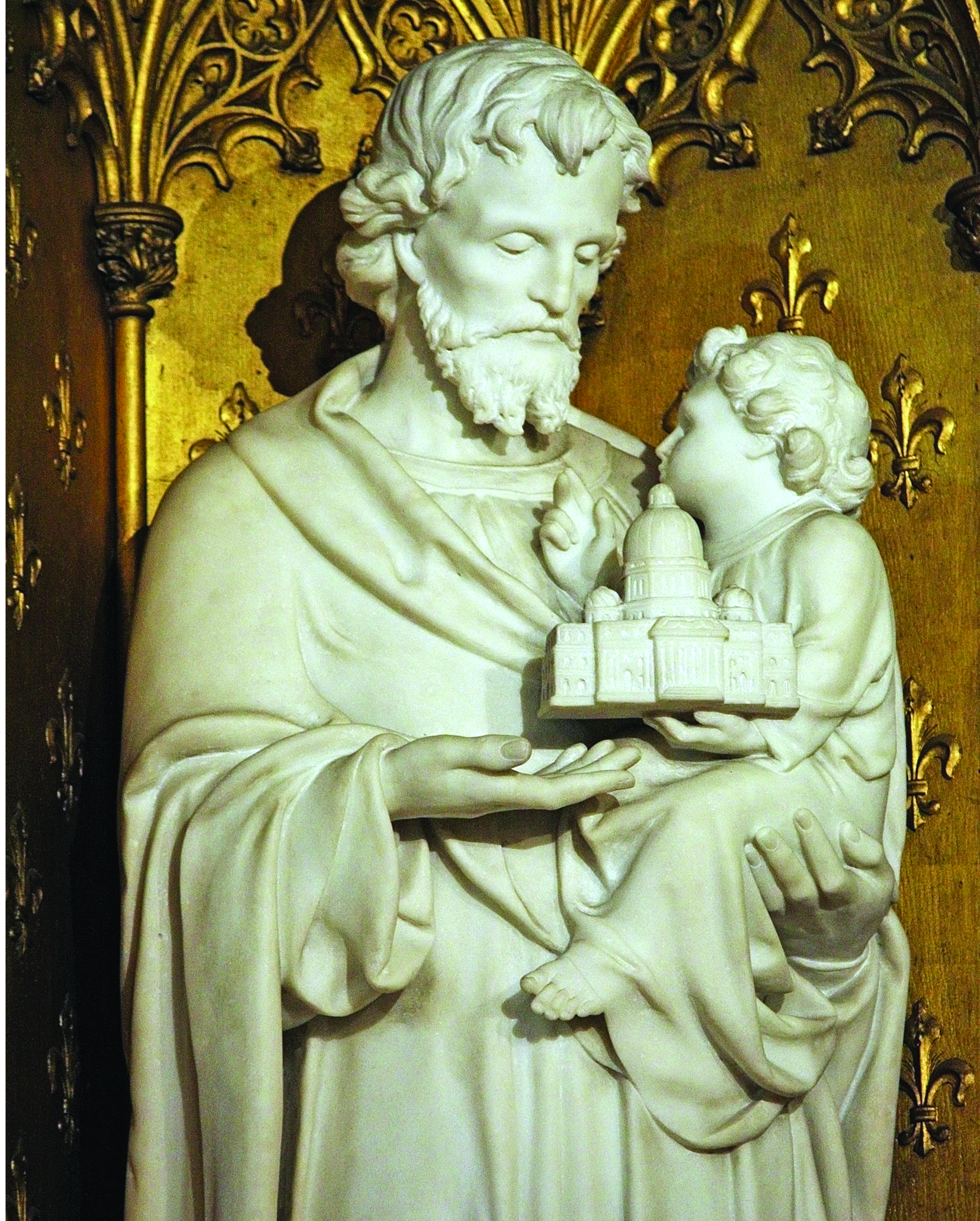 Fr. Donald Calloway, MIC, posted his reaction to the December 8 announcement of a Holy Year of St. Joseph, saying, “This is the best thing that Pope Francis has done.” 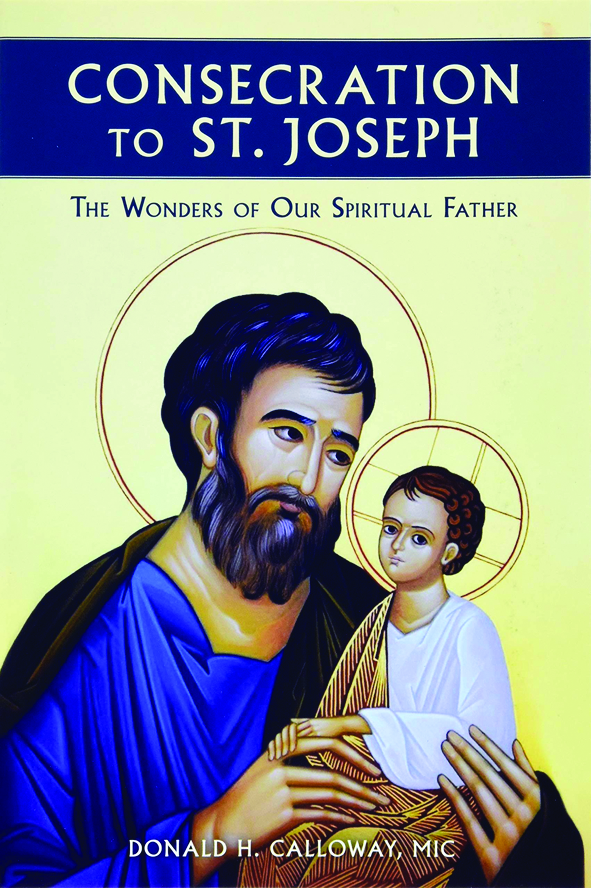 Consecration to St. Joseph: The Wonders of Our Spiritual Father, by Fr. Donald H. Calloway. The book was released January 1, 2020, and immediately sold out 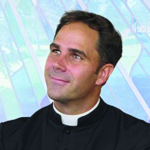 In May of 2019, Fr. Calloway was working on his new book, Consecration to St. Joseph: The Wonders of Our Spiritual Father; the book was released January 1, 2020 and immediately sold out. An Inside the Vatican subscriber wrote: “I bought every copy I could get in January and began distributing them in my parish. Within weeks, many friends and parishioners joyfully proclaimed that this book has changed their lives; and, I began hearing about the same reaction from people all over the country and throughout the world! This was before the pandemic and the worldwide panic of the US presidential election.”

Prophetically, Father Calloway’s new book documents in detail the importance of this Holy Year of St. Joseph. The final chapter of the book, “Terror of Demons” (pages 217-229), offers sure hope for all the faithful as we begin this Year of St. Joseph suffering from the worldwide pandemic, the divisive US Presidential election, and a steady stream of reports of various scandals rocking the very foundation of the Church.

The promise of St. Joseph’s intercession, so beautifully expounded in Fr. Calloway’s book, has already strengthened many. With Fr. Calloway, let us all pray that Jesus, Mary and Joseph together — the Holy Family of Nazareth — will continue to gather and fortify their holy army to defeat the ancient enemy of Marriage-and-Family.

“All fatherhood is a threat to Satan,” Calloway writes. “For centuries, the devil ‘delighted’ in the reality that so few Christians prayed to St. Joseph and called upon his paternal intercession. Today, God wants to make St. Joseph’s fatherhood known and replicated in the world.” (p. 221)

And, Fr. Calloway continues, “This terrifies Satan. The devil knows what the intercession of St. Joseph is capable of doing. If men resemble St. Joseph, the kingdom of Satan will be destroyed.” (p. 221) 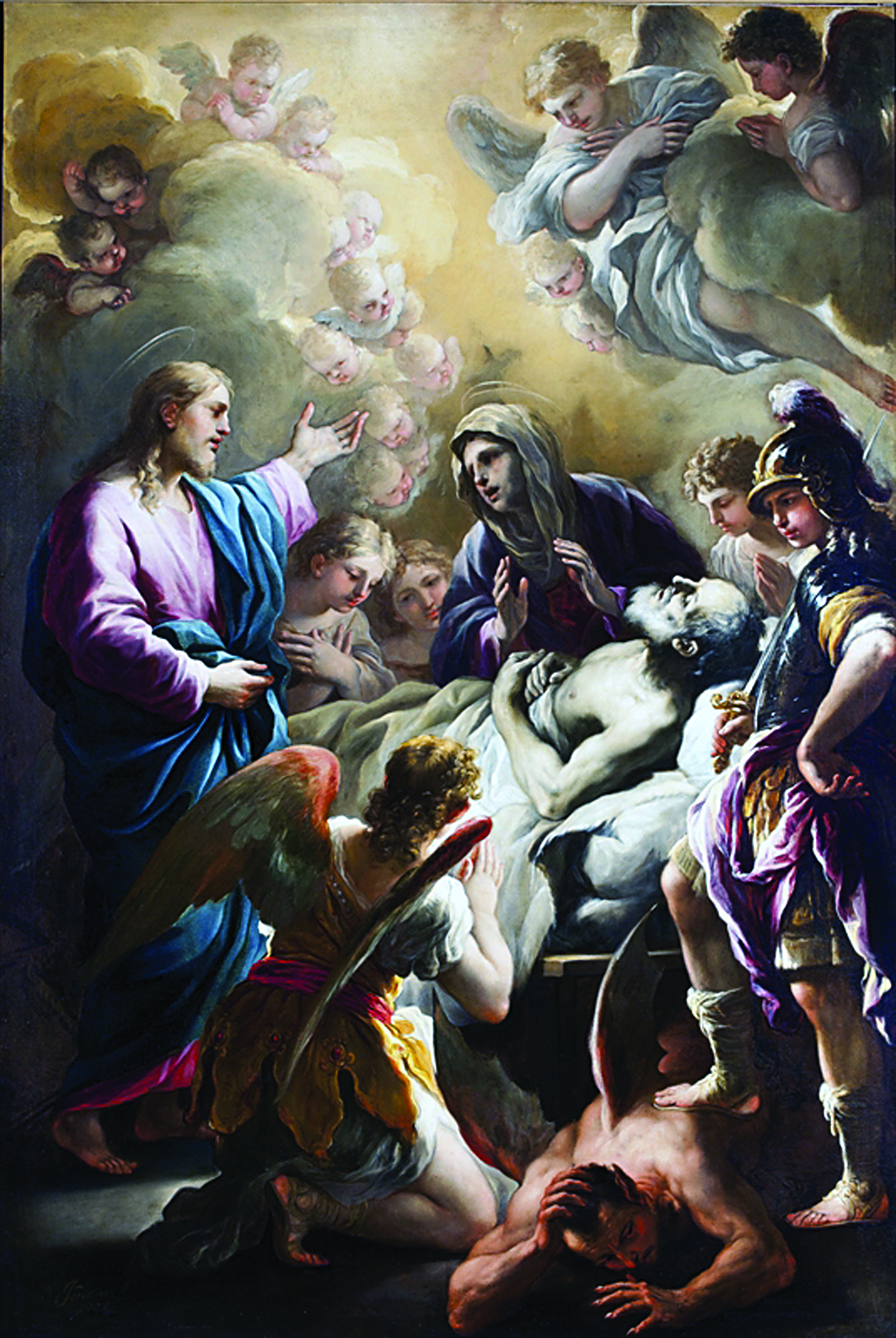 The Death of St. Joseph by Luca Giordano. At the bottom of the painting, an angel holds down the devil who has been defeated by the saint

More excerpts from Calloway’s chapter on “Terror of Demons”

“In heaven, Jesus continues to listen to his virginal father because St. Joseph’s desires are always in accord with God’s most holy will. Satan is terrified that St. Joseph continues to exercise paternal influence in heaven through his extraordinary intercession with the Son of God.” (p. 222)

“The last thing the devil wants is for men to be apparitions of St. Joseph, increasing the presence of St. Joseph in the world.” (p. 222)

“When laymen, priests, and bishops pattern their paternal authority after that of St. Joseph, the Church will experience tremendous victories over evil.” (p. 222)

“The loving and merciful fatherhood of St. Joseph… [teaches us] the proper use of paternal authority and cooperation with Jesus and Mary in the salvation of the world.” (p. 222)

“St. Joseph was destined to cooperate, in a way, in the redemption of the world.” — St. Alphonsus Liguori (p. 222)

“What the Church needs today are images that depict St. Joseph as a dragon-slayer. Such images are needed in homes and churches today to convey the real manhood of St. Joseph.” (p. 223)

“Impure men pose no threat to the devil because they are spiritually impotent. If men want to see God and have power over darkness, they must strive to have a chaste and loving heart like St. Joseph.” (p. 223)

“The Church and the world need men who are terrors of demons! It will only happen when men imitate the purity of St. Joseph. If priests and bishops do this, the Church will be renewed… parishes will once again be filled with throngs of people zealous for the things of God.

‘Your name, Joseph, shares in the power of the holy names of Jesus and Mary.’ —Blessed Bartolo Longo” (p. 226)