A Young Polish Priest, Murdered 36 Years Ago, Is Remembered

A Young Polish Priest, Murdered 36 Years Ago, Is Remembered

Fr. Jerzy Popieluszko, the chaplain of the Solidarity movement, is on the path to sainthood 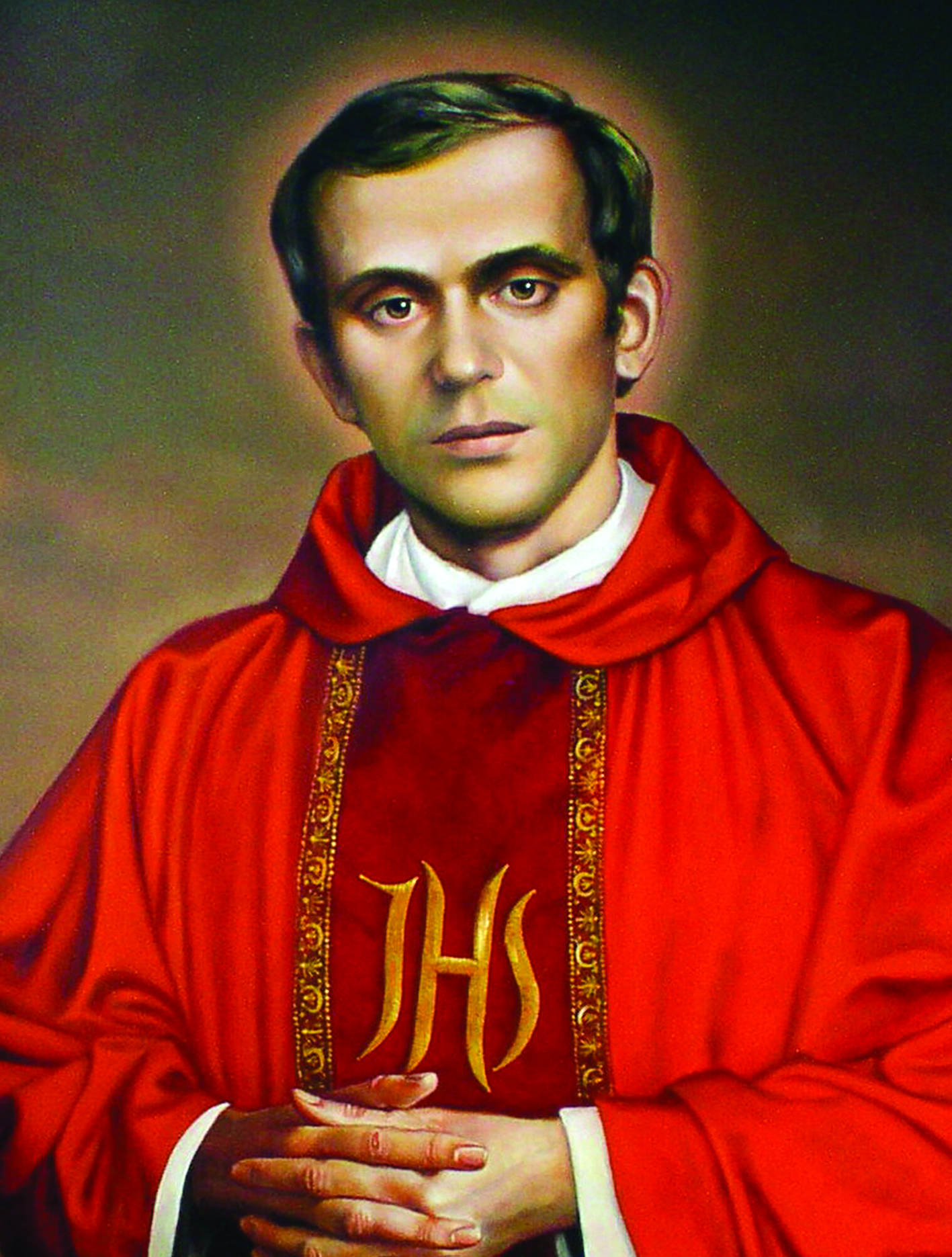 An image of Blessed Jerzy Popieluszko. 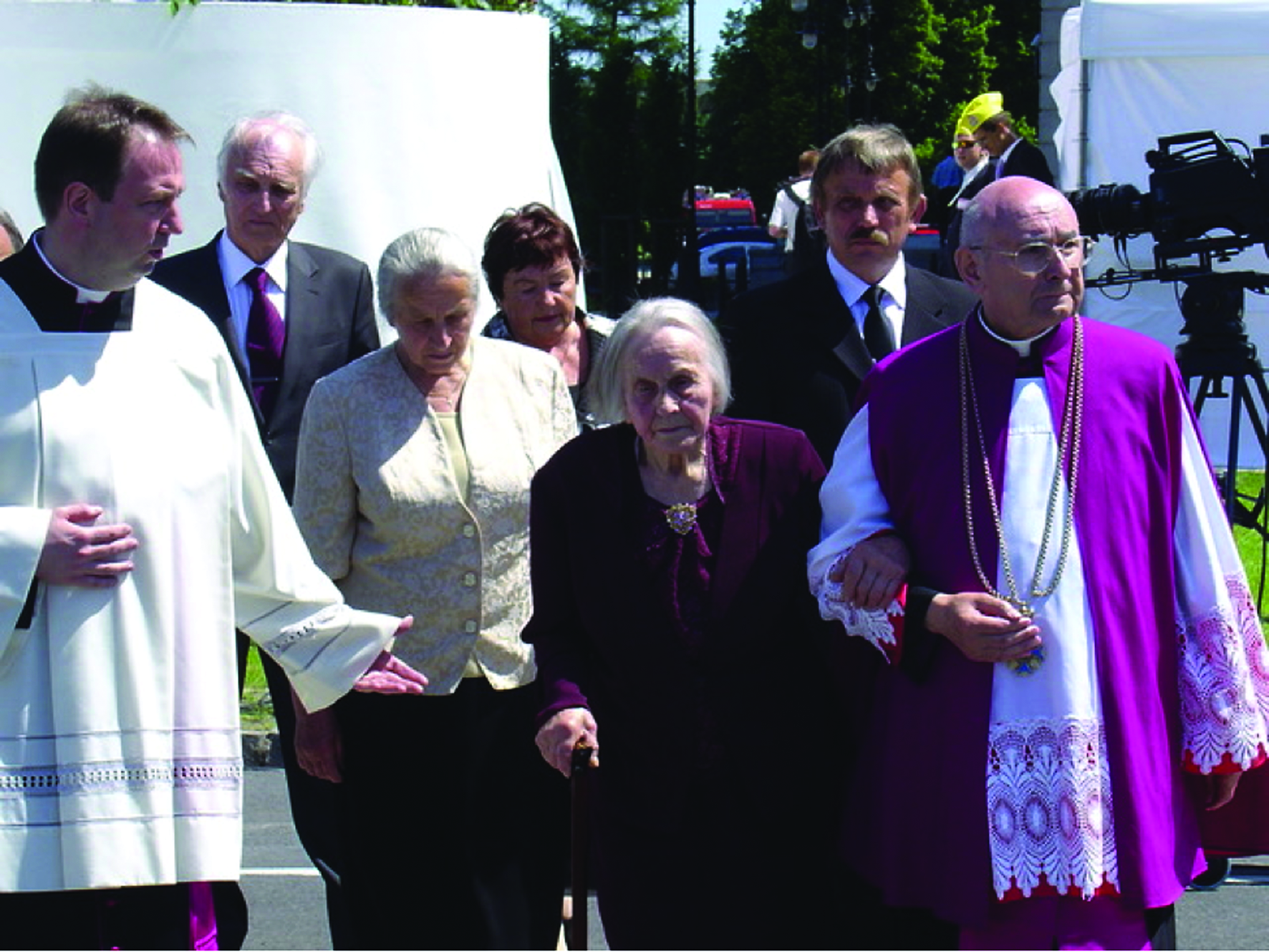 Above right, his mother, Marianna, attends the beatification ceremonies of her son on June 6, 2010.

Earlier this year, Barbara Middleton interviewed Marek Popieluszko, nephew of Blessed Father Jerzy Popieluszko, who was in the 1980s the unofficial chaplain to the Solidarity labor movement in Poland. Solidarity defied Poland’s Communist government and its witness, aided by the Polish Pope, St. John Paul II, helped lead to the regime’s downfall. Here Middleton recounts Marek’s recollections of his uncle in that interview, which took place at the cloistered Monastery of the Visitation in Toledo, Ohio. 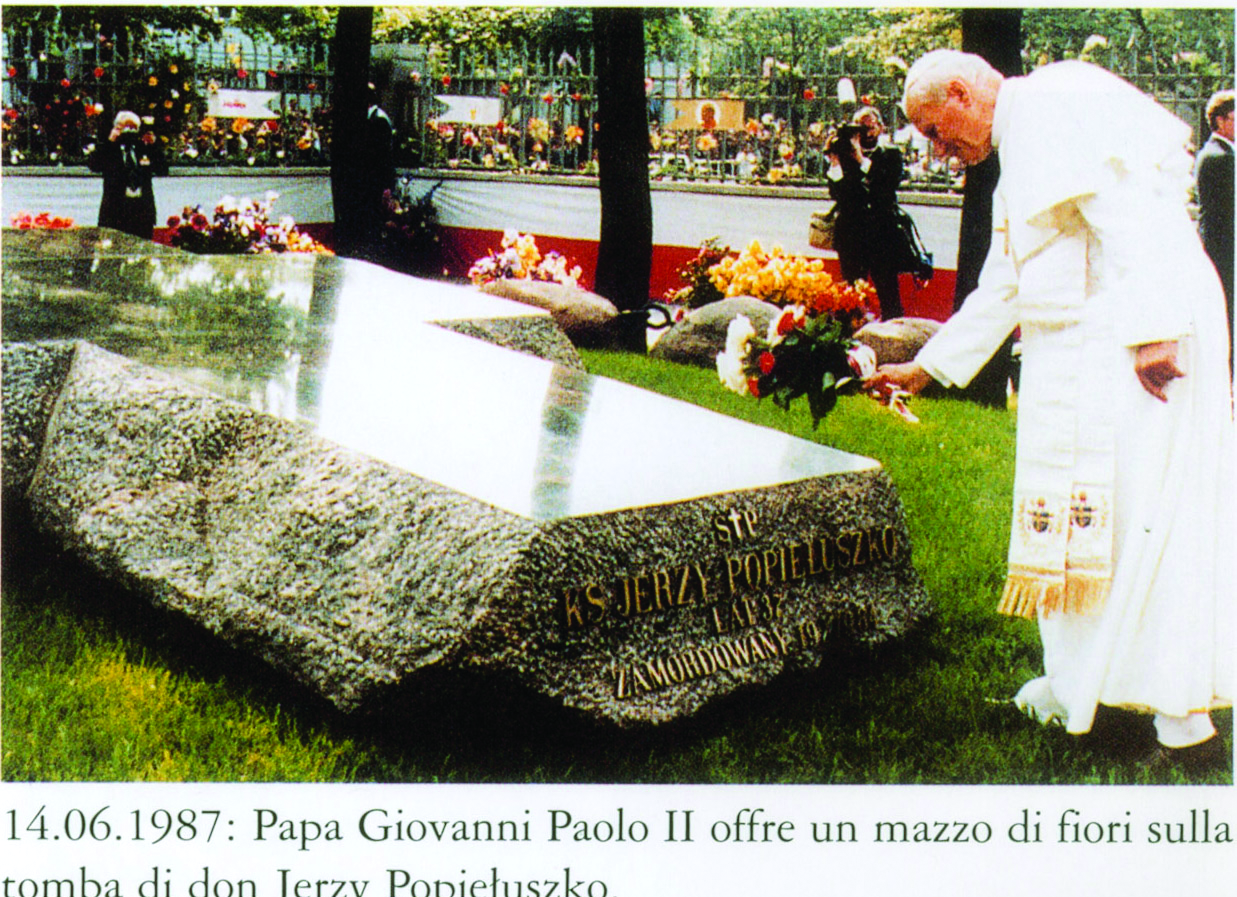 On September 14, 1947, Jerzy Popieluszko was born to Marianna and Wladyslaw Popieluszko on a farm in the village of Okopy, Poland. Marek Popieluszko, his nephew, relates that Jerzy’s mother, Marianna, stopped breathing twice during her labor. Her grandmother, the midwife, started her breathing again, but Marianna lost her vision temporarily and could not attend the baptism of the fragile child who was actually named Alphons. According to the website dedicated to Blessed Jerzy’s canonization, popieluszko.net.pl, “The climate of deep religious life in his family home, permeated with Marian devotion, formed in him from an early age traits of strong spirituality, which over time led him to a deep, mature faith and extraordinary pastoral service.”

The adult Jerzy entered the seminary in Warsaw under Cardinal Stefan Wyszynski in 1965. He chose Warsaw, said Marek, because of its closeness to the monastery of St. Maximillian Kolbe, a favorite saint of his. However, the Communists were annoyed that the cardinal didn’t stop the seminarians from praying publicly, and for punishment they forced the seminarians to join the army for two years.

Jerzy was accordingly drafted, and they hoped to indoctrinate him so that he would lose his vocation. Thus began a period of persecution, of which Marek gave examples. Jerzy was not allowed to leave the compound for two years, except once, for a wedding anniversary of his parents. The Communists also wanted Jerzy to remove his medal of the Blessed Mother and his rosary ring. He refused, and was punished for it: he was forced to wear a gas mask and backpack during exercise. He was made to stand on an uncomfortable floor without shoes for hours; he had to clean the bathrooms; he was pushed into a pool (he couldn’t swim and he was afraid of water) and was drowning, but they pulled him out at the last minute. He was placed in solitary confinement and endured beatings, all for love of Jesus and Our Lady.

Coming home from the army very sick and weak, he was admitted to the hospital for blood transfusions. 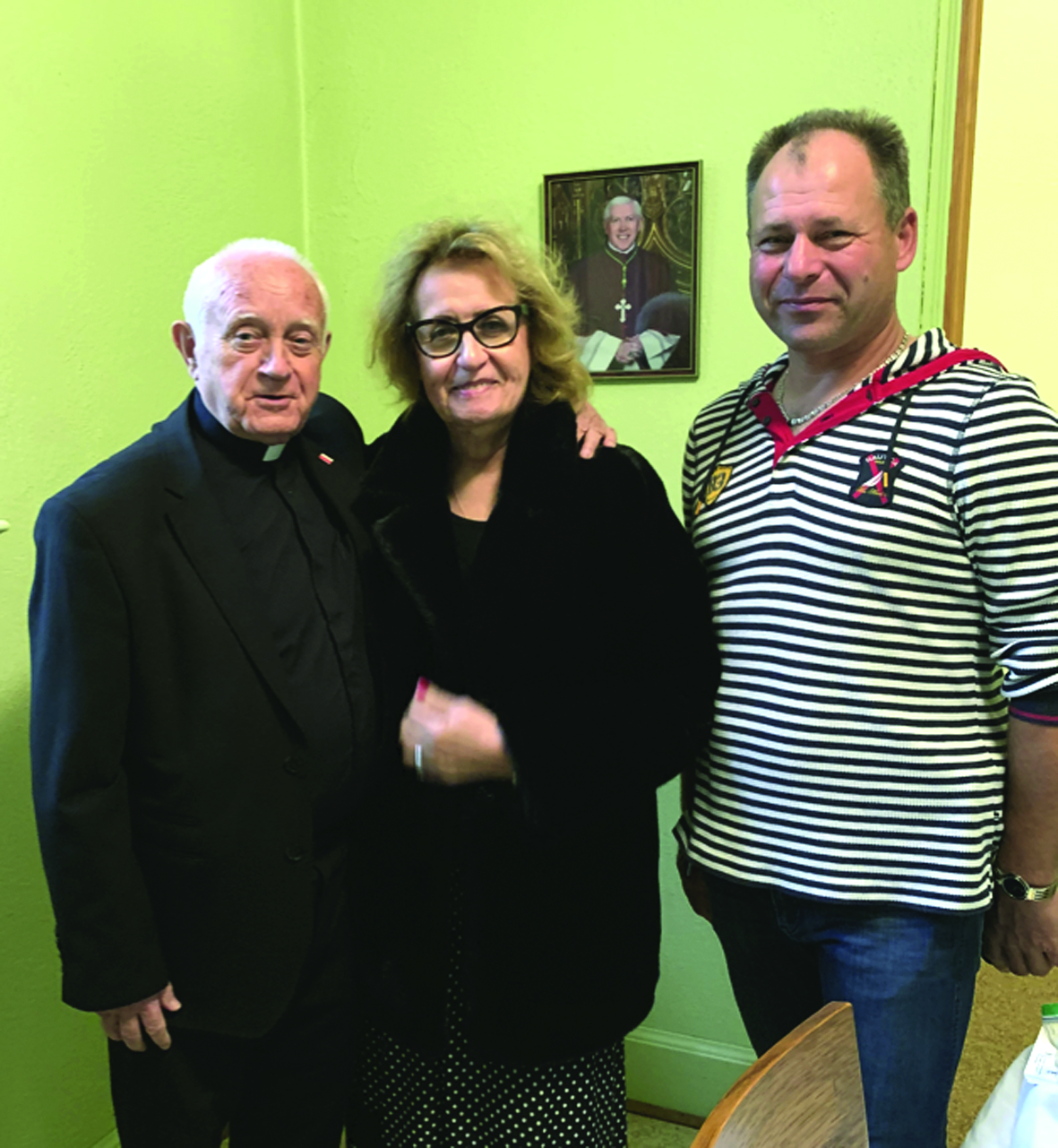 Finally returning to the seminary, Jerzy was ordained on May 28, 1972. His name was changed from Alphons to Jerzy by Cardinal Wyszynski. A year later he was transferred to his last parish, St. Stanislaus Kostka in Warsaw. He lived in the rectory with Fr. Czeslaw Banaszkiewicz, the pastor, for six years. Fr. Czeslaw attested that Fr. Jerzy loved his people, loved everybody. Marek remarks that Fr. Czeslaw was a courageous priest who wasn’t afraid of the Communist system; perhaps Fr. Jerzy gained some of his resolve from the beloved pastor.

Marek remembers going on a vacation to visit his uncle, living 20 miles from the Russian border, in August, 1984, just months before he was killed. Fr. Jerzy, he said, was a normal man; he went shopping and out for ice cream and to the train station to see the “moving stairs” (an escalator appeared for the first time in Warsaw). Marek was 14 years old at the time of his uncle’s murder.

When Solidarity met in the summer of 1980, Fr. Jerzy was made the chaplain and sent to counsel the striking workers. 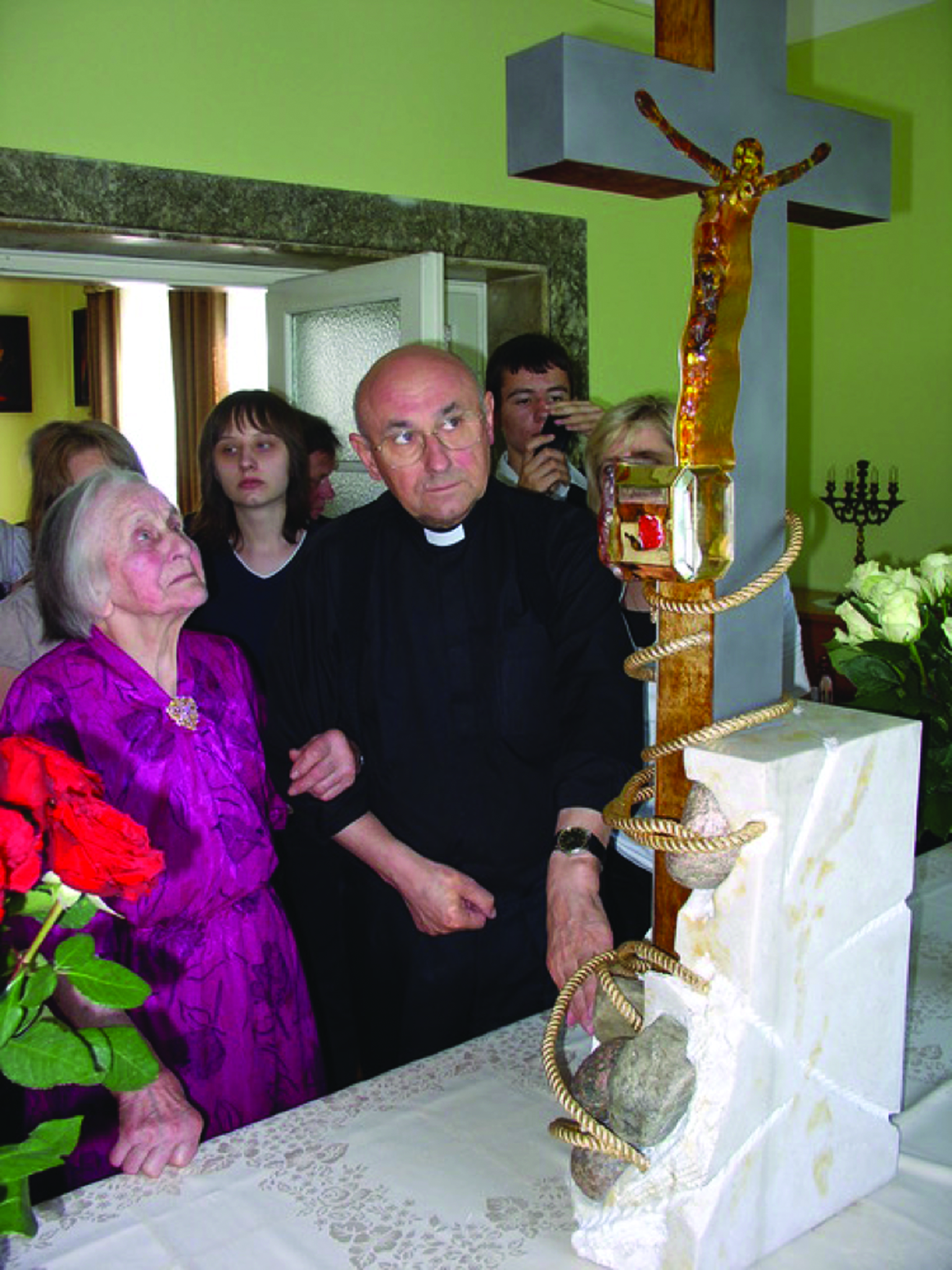 Marianna Popieluszko, the mother of the murdered priest, views a commemorative crucifix which includes instruments of Bl. Jerzy’s murder.

His sermons at his monthly Masses for the workers inspired them. (In fact, they were routinely carried on Radio Free Europe.)

Because of his intimate cooperation with Solidarity, a grave threat to the Communists’ control of the people, he received repeated threats on his life by the police.

On October 19, 1984, they finally acted. Fr. Jerzy’s car was stopped near the village of Tourn by officers of the state security service. They forced his driver (Waldemar Chrostowski) into the back of the car; he later escaped and is still alive. They repeatedly beat Fr. Jerzy and tied a rope around his neck, down his back and to his legs, bent so that if he tried to move he would choke.

Then he was thrown into the trunk.

He managed to escape the trunk once but they caught him and beat him again. Then they took him to the Vistula Water Reservoir near Wloclawek and dropped him in the water with weights tied around his ankles.

The water’s current is usually very strong but during that particular season it was moving more slowly; otherwise there would not even have been a body to bury.

It was, in fact, Marek’s own dad who went to identify the body of his brother Jerzy, who was just 37 at the time of his death. Even without internet and cell phones, hundreds of thousands showed up for Fr. Jerzy’s November 3, 1984, funeral, including Lech Walesa, the founder of Solidarity. The Communists, concluded Marek, had hated Fr. Jerzy and the Catholic Church because they were afraid of the Truth.

On June 6, 2010, Fr. Jerzy was beatified by Pope Benedict XVI. His mother, Marianna, who died in 2013 at 93, was able to attend the beatification ceremony.

What happened to the men who murdered Fr. Jerzy? Captain Grzegorz Piotrowski, Leszek Pękala, Waldemar Chmielewski and Colonel Adam Pietruszka, who gave the order, were arrested, convicted and jailed, yet all were released not long after as part of a wide amnesty.