Benedict’s Diagnosis of the Church in Ireland

Benedict’s Diagnosis of the Church in Ireland

The Church lost Ireland. Can she reclaim the false narrative of the past? 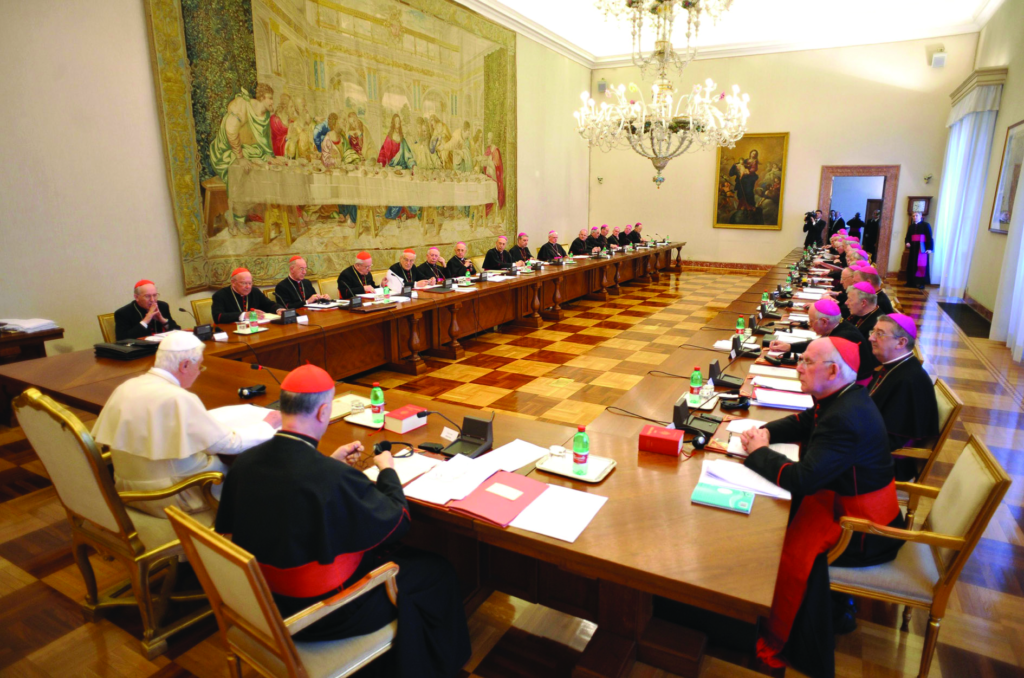 Pope Benedict XVI meets with Irish bishops at the Vatican, Feb. 15, 2010. The two-day, closed-door meeting was to assess responsibility in the Irish Church’s handling of priestly sex abuse cases and explore ways to heal wounds left by the scandal (CNS photo/L’Osservatore Romano via Reuters)

In 2010, Pope Benedict XVI, in his Pastoral Letter to the Catholics of Ireland, offered an assessment of its abuse crisis, and where the Church had gone wrong:

“Certainly, among the contributing factors we can include: inadequate procedures for determining the suitability of candidates for the priesthood and the religious life; insufficient human, moral, intellectual and spiritual formation in seminaries and novitiates; a tendency in society to favor the clergy and other authority figures; and a misplaced concern for the reputation of the Church and the avoidance of scandal, resulting in failure to apply existing canonical penalties and to safeguard the dignity of every person.”

He had a particularly harsh word for the Bishops of Ireland.

“It cannot be denied that some of you and your predecessors failed, at times grievously, to apply the longestablished norms of canon law to the crime of child abuse. Serious mistakes were made in responding to allegations. I recognize how difficult it was to grasp the extent and complexity of the problem, to obtain reliable information and to make the right decisions in the light of conflicting expert advice. Nevertheless, it must be admitted that grave errors of judgment were made and failures of leadership occurred. All this has seriously undermined your credibility and effectiveness.”

By 2010, the Catholic Church had lost Ireland. This became clear in a series of changes to the Constitution that were passed by popular vote. The first of these, a referendum on children’s rights, undermining the natural rights of parents, passed in 2012. The Church did not get involved in this referendum.

Later, in 2015, a Constitutional referendum to allow same-sex marriage passed by a wide margin. In 2018, with an almost similar, overwhelming majority, the repeal of the 8th Amendment – prohibition on abortion – was passed. The Church distributed articulate pamphlets on these two issues to the faithful, but it was almost absent from the public square. Opposition was mostly led by civil society and lay groups.

For some, this near-silence was unforgivable: a dereliction of duty. For others, it was a practical response to reality: after years of crisis – stumbling from one inquiry into Church failings after another – engagement by the clergy in any form, it was feared, would provoke a backlash.

The most recent report into historic failings of the Church provided an opportunity to re-shape the narrative. An investigation into the Mother and Baby Homes in Ireland, finished in 2021, found that religious-run institutions were actually better-maintained and warmer places than those run and controlled by local authorities. The report stated, in no uncertain terms, that conditions were not worse than for most people living in poverty at the time:

“It is important also to distinguish between mother and baby homes and the county homes. The most accurate information about living conditions comes from the inspections carried out by the Department of Health inspectors, but these only begin in the late 1930s, and not all survive. The available evidence suggests that, while living conditions in the mother and baby homes were basic, there is no indication that they were inadequate by the standards of the time, except in Kilrush and Tuam.”

Yet, the popular narrative was hammered home long before the report came out that these Church-run homes were awful, desolate places, created in a cold, uncaring time where Catholic Jansenism was the prevailing ethos. The truth is still getting its boots on while the false impression persists. A media offensive focusing on minor details of the 3,000-page report was launched to discredit it, and neither the Church nor the Catholic laity were able to counter it.

The Church, ubiquitous in Irish society for more than the first half century of the country’s independence, is now most certainly in the margins. It has become the “small Church” Joseph Ratzinger predicted for the world in 1969:

“From the crisis of today the Church of tomorrow will emerge — a Church that has lost much. She will become small and will have to start afresh, more or less from the beginning.”

In January 2022, figures released indicated that 21% of Ireland’s entire population of parish priests and brothers — both serving and retired — have died in just three years. And the proportion due to retire in the next three years is large. Vocations in Ireland are in crisis; Ireland is dependent on priests from the new Church in Africa, Asia and Latin America.

On the face of it, the Church in Ireland seems to be in a death spiral, but this also brings opportunity. Increasingly, those who attend Mass are doing so out of commitment rather than social habit or expectation. But continued contraction cannot be met with resignation. A new evangelization is needed. 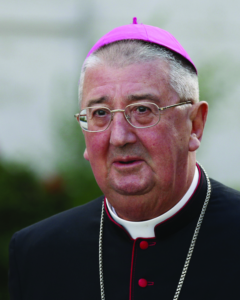 Archbishop of Dublin, Diarmuid Martin retired in December 2020, was the last recognizable public face of the Catholic hierarchy.

When the Archbishop of Dublin, Diarmuid Martin retired in December 2020, he was the last recognizable public face of the Catholic hierarchy. Whether for good or for ill, the bishops of Ireland have a very limited public persona. Unfortunately, they are also unrecognizable to many of their parishioners. The new, small Church requires the distance from flock to shepherd to diminish.

But the shepherds also must defend their Church more vigorously. The submission of the Church to state-imposed Covid restrictions caused many to question the point of the faith. If the obligation to attend Mass could so easily be waived, if receiving Communion on the tongue could be relegated to an unnecessary option, if holy water fonts could be replaced by hand sanitizers, what exactly remains fixed? Some walked away. Others remain, but are frustrated. 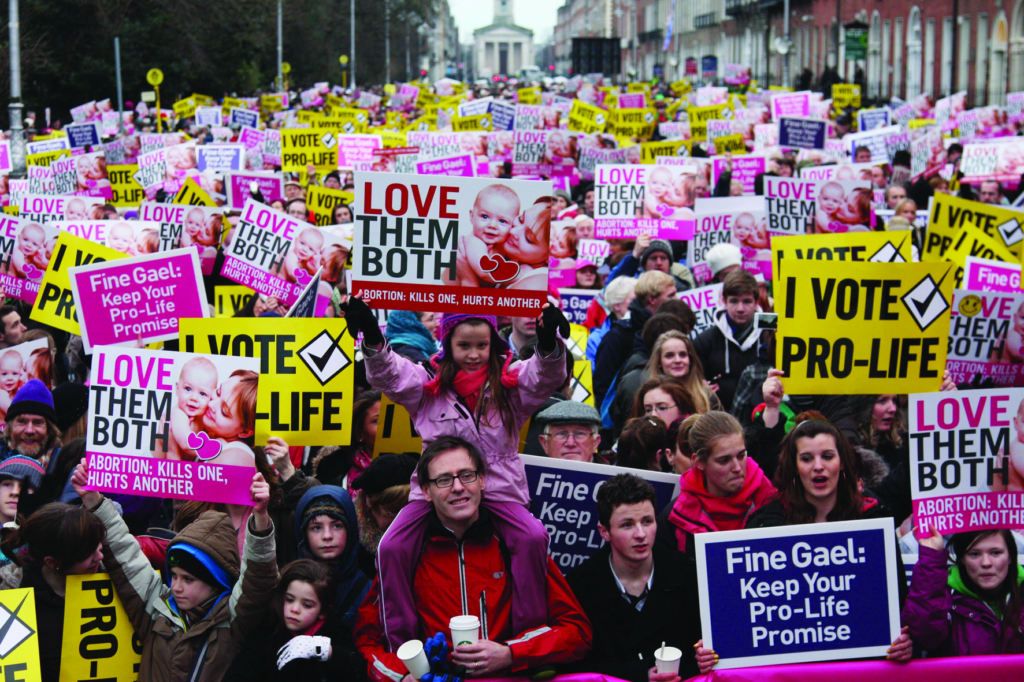 In 2015, a Constitutional referendum to allow same-sex marriage passed by a wide margin. In 2018, with an almost similar, overwhelming the repeal of the 8th Amendment – prohibition on abortion – was passed

A credible Catholic Church in Ireland needs to reclaim the past from the false mythologies of recent years. The leadership of the Irish Church must be unafraid of standing on the shoulders of history, despite the failings that Pope Benedict XVI pointed to.

In that same letter, he pointed to all the good in the history of the Church in Ireland — good the Church itself seems afraid to acknowledge: “The Church provided education, especially for the poor, and this was to make a major contribution to Irish society … generations of missionary priests, sisters and brothers left their homeland to serve in every continent … Many dioceses, especially in Africa, America and Australia, benefited from the presence of Irish clergy and religious who preached the Gospel and established parishes, schools and universities, clinics and hospitals that served both Catholics and the community at large, with particular attention to the needs of the poor. In almost every family in Ireland, there has been someone — a son or a daughter, an aunt or an uncle — who has given his or her life to the Church.”

But his letter came with an analysis of what led to the decline of the Church that is still relevant today: “All too often, the sacramental and devotional practices that sustain faith and enable it to grow, such as frequent confession, daily prayer and annual retreats, were neglected. Significant too was the tendency during this period, also on the part of priests and religious, to adopt ways of thinking and assessing secular realities without sufficient reference to the Gospel.”

*Dualta Roughneen is a graduate Civil Engineer of the National University of Ireland, Galway, and holds an MSc in Human Rights from University College Dublin. He has worked in Sudan, Afghanistan, Liberia, North Korea, Ethiopia, the Philippines and many other countries, in humanitarian response. He has been a columnist for the Catholic Voice.

His publications include the books North Korea: On the Inside Looking in (2014) and The Right to Roam: Travellers and Human Rights in the Modern Nation State (2010).